The wild and wavy North Course complements the Australian Sandbelt look of the acclaimed South Course near Oakland's airport.

ALAMEDA, Calif. -- Contrast is a critical component to any successful 36-hole golf facility.

The newly-renovated North Course front nine at Corica Park opened for preview play Oct. 14, introducing golfers not only to a completely different look from the old routing, but also something entirely unique and foreign compared its sister South Course. Marc Logan made sure of it.

Logan is the chief agronomist and course architect for Greenway Golf, a Bay Area-based golf management company that has been systematically revitalizing Corica Park, a 45-hole facility near the Oakland International Airport that was once one of America's busiest golf complexes.

Three years ago, Logan, an Aussie, was the man behind the scenes working with Rees Jones to transform the South Course into a playground that looks like something from the Australian Sandbelt back home. This time, he went halfway around the world to Scotland, using the natural contours and large greens of the Old Course at St. Andrews as inspiration for the North's new style. Logan hopes the back nine is ready to debut in fall 2022 to complete the roughly 6,400-yard routing.

Greenway has hauled in more than 15,000 truckloads of sand to raise the course 4-5 feet to prevent flooding. This sand-capped base will help fairways run firm and fast all year long.

"One of the challenges in golf today, how do you make it interesting for the average player and satisfy the better player?" Logan said. "The South was this big, long, soft-rolling course...For the North, being it's not super long, I wanted to challenge the better player to think of where to place the ball. That will be a fun course as a par 70. The firmness and the contours will be the defense."

Tour of the North's front nine 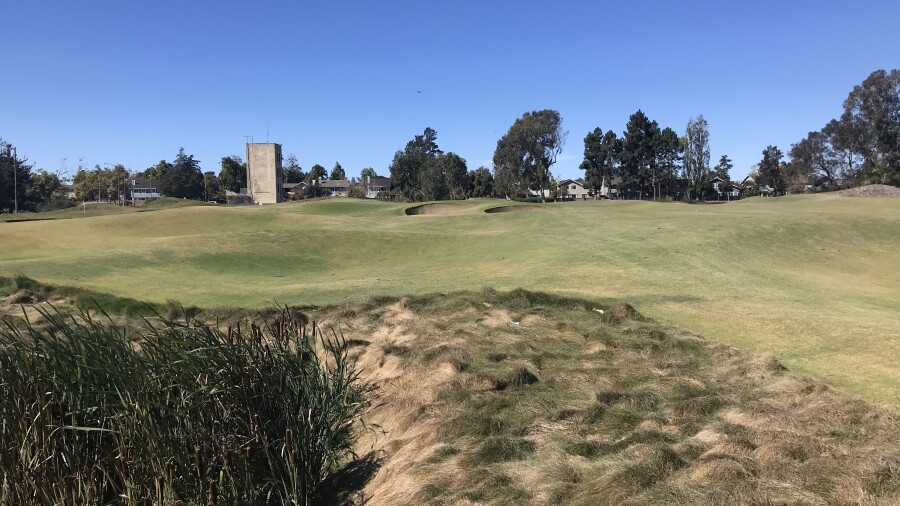 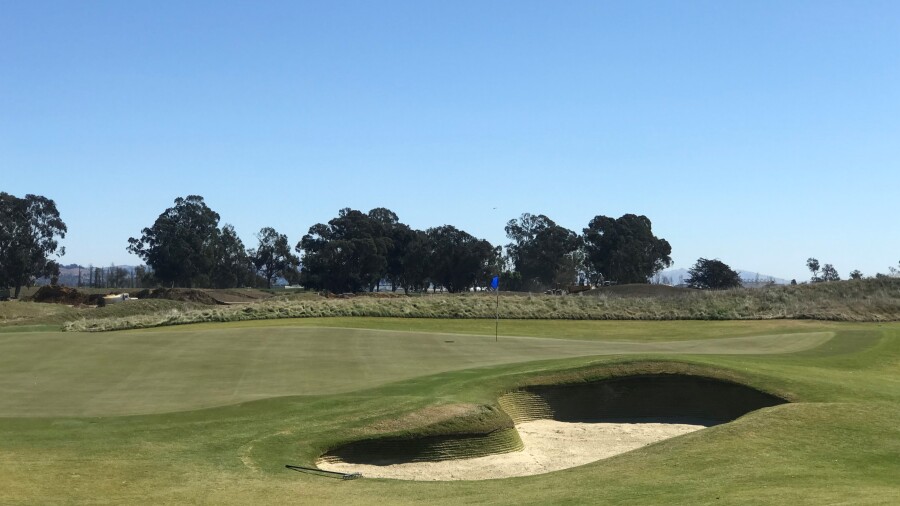 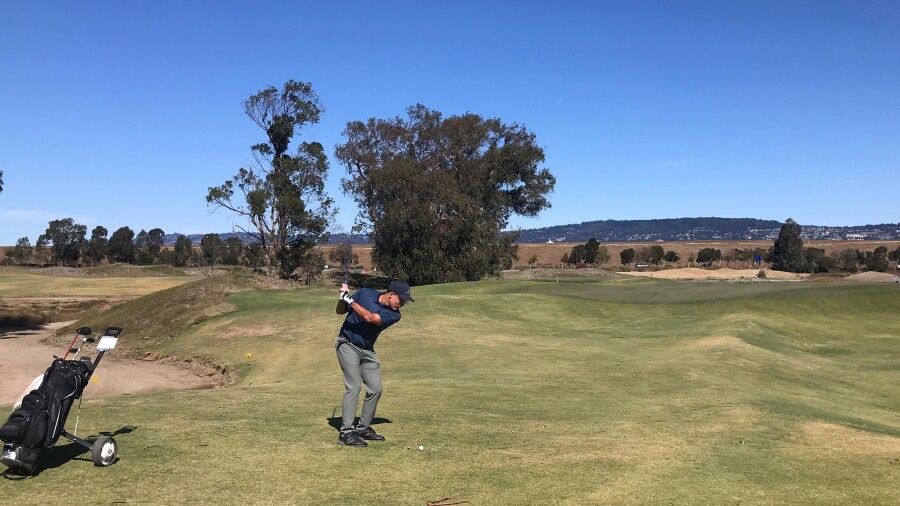 A golfer hits to the 7th green on the North Course at Corica Park. Jason Scott Deegan/GolfPass 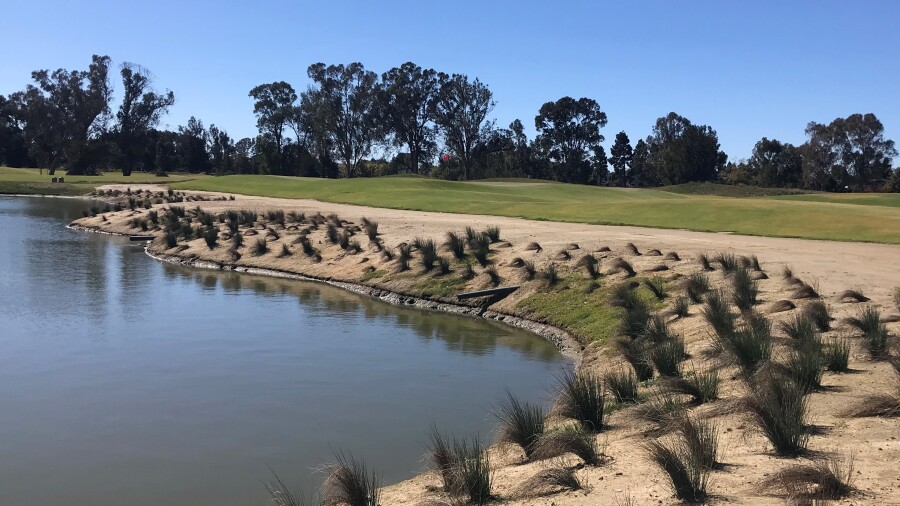 Going for the green on the drivable 8th hole of the North Course at Corica Park seems like a no-brainer until hooking the drive left into this hazard. Jason Scott Deegan/GolfPass 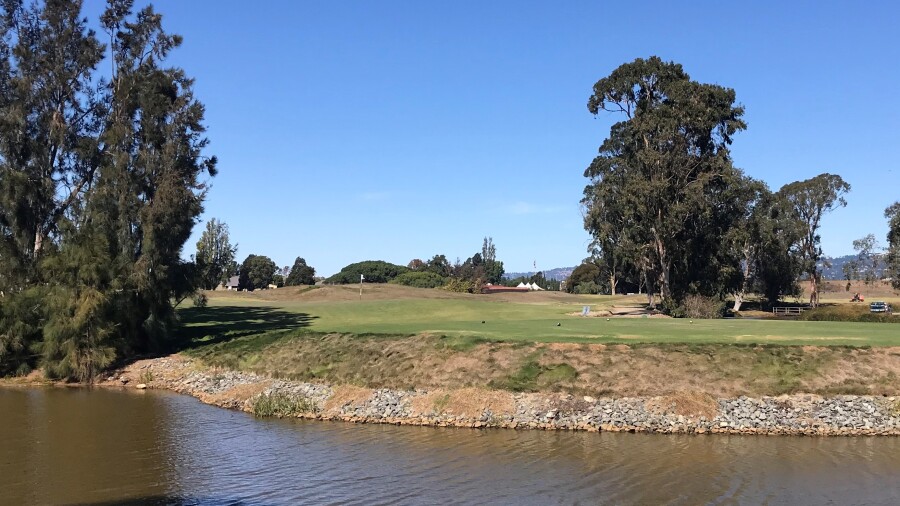 A look back at the par-3 6th green from the 9th fairway of the North Course at Corica Park. Jason Scott Deegan/GolfPass 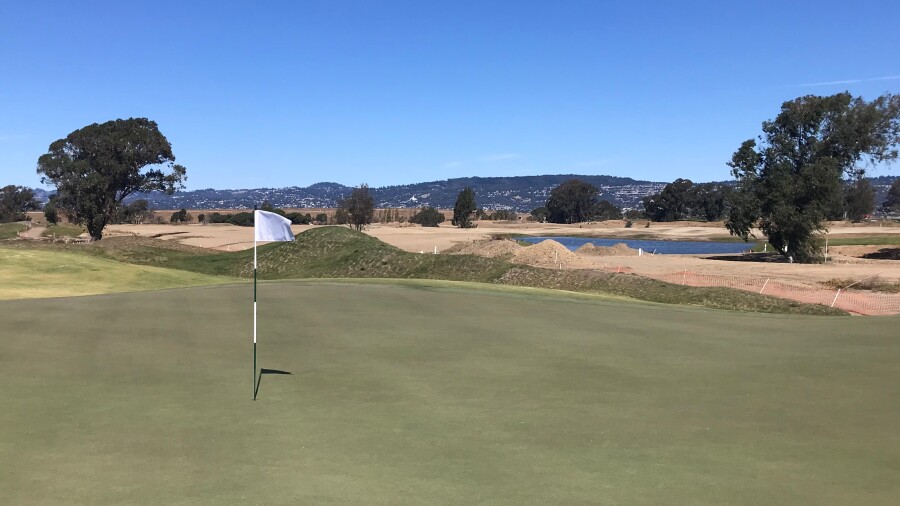 Beyond the 9th green, there's still plenty of dirt to be shaped and grassed to create the back nine of the North Course at Corica Park. Jason Scott Deegan/GolfPass

It seems the only thing similar between the North and South courses is the grass: fescue for heavy rough in spots, bentgrass on the greens and Bermuda in the fairways.

From the opening tee shot on the North, players will notice the tremendous width and creative shaping of the fairways, all loaded with humps and hollows. There is virtually no rough, just rare patches of fescue on the perimeter and proper angles to get around trees at the corners of doglegs.

When it comes to sand, the two courses are polar opposites. The 6,874-yard South Course is likely the most bunkered muni in the country with 111 rugged-looking traps. What the North lacks in numbers - 21 bunkers for the entire 18 holes - it will make up for in style points and positioning. All of them are deep stacked-sod bunkers, many guarding the entry points to the green.

"Links bunkers are supposed to be more penal. You might have to play out backwards," Logan said. "There are a lot of bunkers on the South course, but you can play out of them as easy as if you were on turf."

Where Logan really went wild was the massive greens. They average 8,300 square feet in size (600 square feet larger than the South) with steep ridges that come in endless waves. If you haven't hit the proper tier, good luck.

"Large greens were typical in the early 1900s," Logan said. "I wanted to keep that. With all the firmness and contouring, the greens can add 1 to 2 club lengths (on the approach shot). It allows a shorter course some variance and different shot values."

Forget the practice range prior to your round. Head straight to the putting green to groove your stroke. My playing partner, relatively new to the game, found putting quite intimidating.

I got within a few yards of reaching the severe green complex of the 498-yard, par-5 fifth in two. I proceeded to four-putt for bogey from below the propped-up putting surface. Despite my follies, I'm a fan of this style of golf. I'd rather struggle to putt than chop balls out of heavy rough or lose them in cross hazards.

"Flat greens will look odd with all the contouring in the fairway," Logan added. "I wanted a natural flow through the golf course."

Thankfully, players can find scoring forgiveness on fun holes like No. 8. This drivable par 4 is only 258 yards from the tips. The danger comes from yanking it left where water lurks, very similar to the risk-reward short par 4 at TPC Scottdale's Stadium Course, made famous by the Phoenix Waste Management Open.

"It's always fun to think about the opportunity of eagle or an easy birdie," Logan said. "Most driveable par 4s are too long, 270 or 280 yards for the whites or blues. I wanted it to be drivable for everybody. Everybody should get excited about a short par 4, not just the longer player."

Preview play, available Wednesdays through Sundays until the full 18-hole course opens, will cost $39-$49, walking only.

Now this Mr. Logan is a true innovator: inspiration drawn from St. Andrews, fast fairways, truly drivable, short par-4's, oversized greens, super-strategic and links-like bunkering, et al. The whole package, the sum of which seems greater than its parts, is what should make this an absolute blast to play.

Golf's cutting edge might ironically harken back--much further than it has--to its roots. And style can be substance if it means better (much more interesting) playability than what is often the middling and commonplace norm. I can see how you would take to this; so would I.