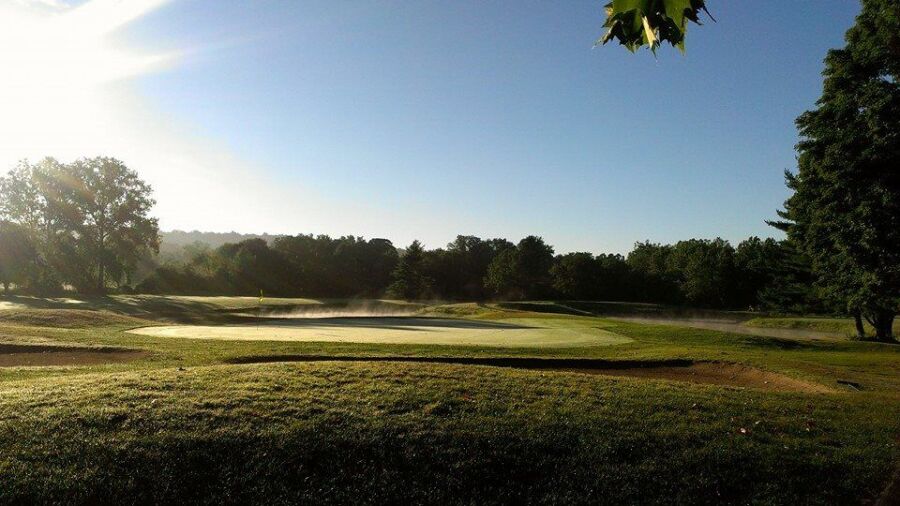 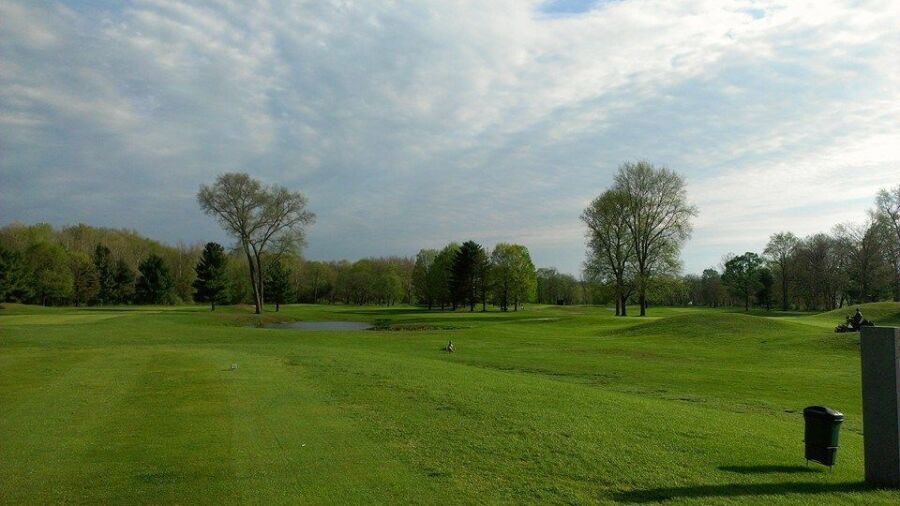 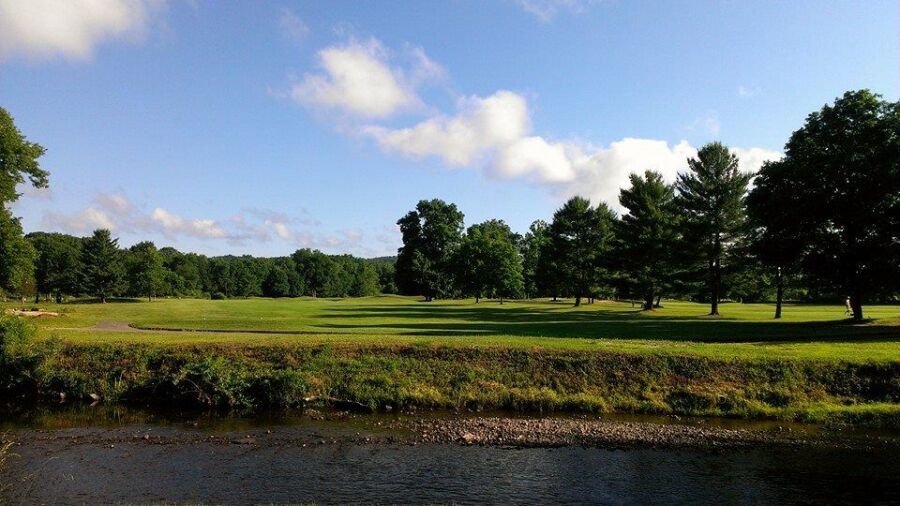 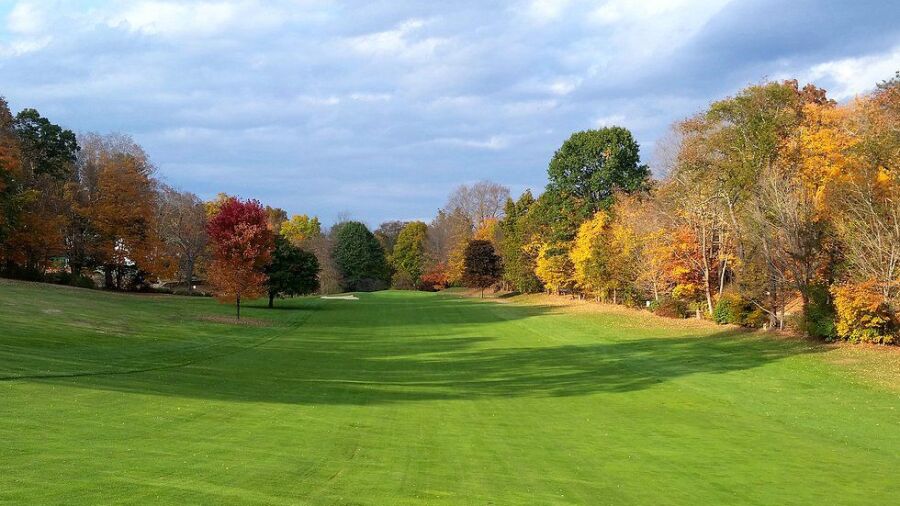 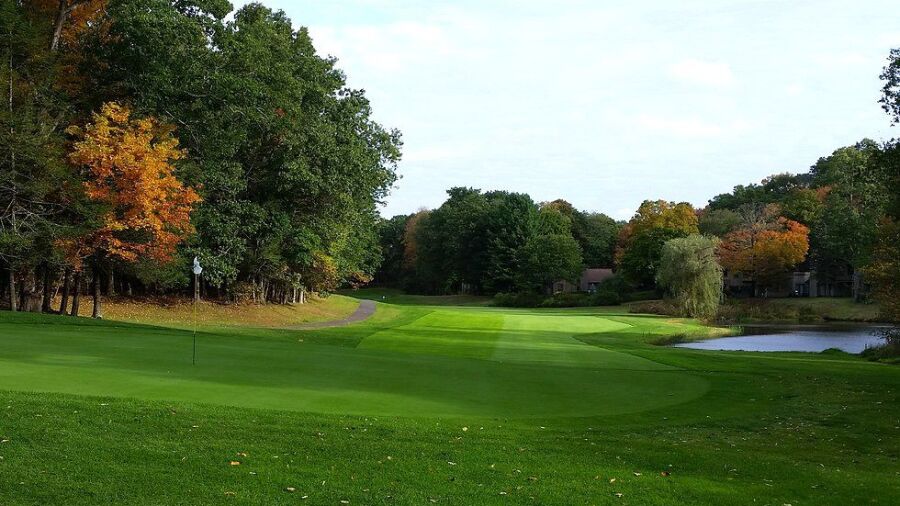 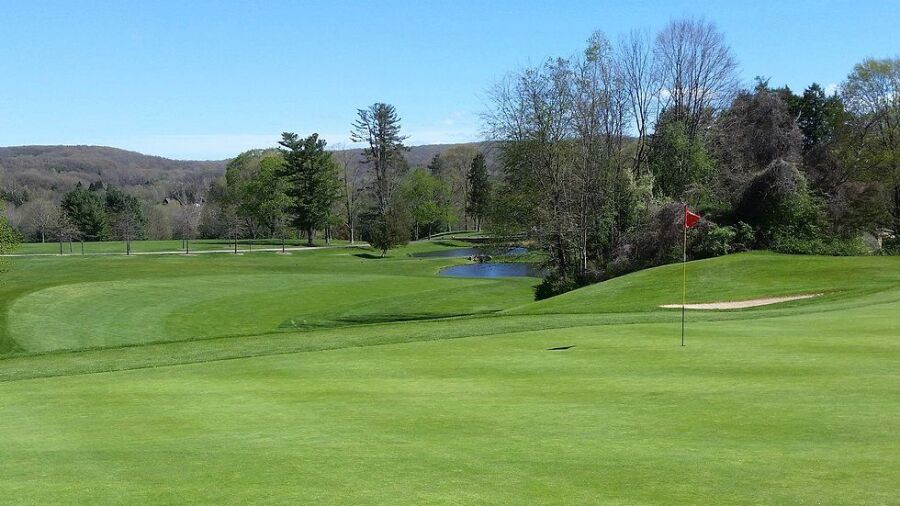 Pomperaug’s solid layout makes for a good round of golf, but the summer drought decimated this course:the fairways (particularly) and roughs are either sketchy or shabby most everywhere. Too bad, because last time I was here in late June, the course’s conditions were good across the board–with the greens leading the way as always. Now the putting surfaces are inconsistent, marred by sporadic pockmarks and other blemishes, and the outstanding smoothness that I’ve become accustomed to over three years now is mostly gone, even though the greens are cut properly. Let’s hope the course returns to form by next spring, although that seems an uphill road for the grounds crew. One further shortfall today was a clear lack of attention to fallen leaves in too many areas, meaning my foursome wasted a good deal of time hunting for any ball that strayed from the beaten path.

Pomperaug is playable, but you’ll need patience. All in all, a disappointment. The course was nonetheless crowded when I left at about noon. Service, as always, was very friendly and helpful.

This course is almost beyond repair

Very tough to see and write this review. Ive played this course for decades and have always enjoyed other than pace of play on some days. It was always in decent shape, moderately challenging, and well priced for a o hole public. Now, I feel like PGC is almost beyond repair. This course should be closed for at least 6 months and revived before charging people to play here. Greens with bare spots, and previous airation left unattended to. Cups left unpainted and edges overgrown and beat up. Bunkers full of weeds and even signs that say GUR but obvious they were not being repaired. Fairways full of bare and dead spots and crab grass grown in. Rough left neven and unmowed for days maybe weeks. The course looked worse and worse the further we got.

The course is laid out well. It is pretty flat. There are enough obstacles (trees, water) to prove interesting. Unfortunately the weather has been extremely dry so the fairways were very dry or with little grass.

Weather and lack of maintenance has ruined this course

Unfortunately we were behind a very slow group of 5 walking golfers who were not concerned with our enjoyment. They were very slow golfers and wasted a lot of time on every hole (talking, looking for balls, etc.). Although this is not the fault of the manegement, I am surprised to see a fivesome playing at 10:00 AM on a Sunday.

Would Benefit From More Proactive Management

First and foremost, I am amazed at the number of rude and discourteous ‘players’ are allowed on this course. It’s just not fun when clueless people are out there on a golf course. Golf etiquette is so lacking. The course has problems, particularly the sand traps, but also has potential from a physical perspective. However, how do you improve people’s attitude. Three possibilities 1) Have a starter there to speak to golfers before teeing off, 2) have someone on a cart out on the course observing the behavior and pace of players, 3) make everyone who plays the course watch a short video on the way to act and respect others on the course. For Love Of The Game,

Good for the money

Great course for new golfers or someone looking to get out for 9 and swing the clubs. Easy to walk at a great price.

Layout:
Pomeraug is a secluded, parkland nine-holer with many water hazards, mostly in the form of large ponds set on the sides of fairways, but also the Pomperaug river. There's enough bunkering–all greenside–to keep things interesting. Trees are dense on the property’s borders, but overall the feeling is open.

Conditions:
Some very significant improvements, especially since I started playing here (again) two years ago. Greens have always been well-tended and they again ran very smoothly at an above-average speed. Yet the big comeback has been the fairways, especially at three, four, and seven. Roughs were decent. Only lackluster areas today were tees and bunkers–some, but not all, of their conditioning flawed more than they should be. Overall, good conditions.

A Few More Playing Points:
The layout, though not hard, is a winner because of the strategic shot values built into it by Architect Ted Manning. If you simply give the ponds a wide enough berth, a good score should be had, but realize that this course, more than most, favors straight hitting. Play the back tees and you’ll find two tough par-threes in five and eight; the third can be played from a frontal tee, requiring a forced carry over water. Three and seven are demanding and tricky doglegs that bend around ponds. All combined, this should supply enough challenge for most players.

Conclusions:
Alhough most choose to ride, the value is simply outstanding when you walk the course, and I found no problem doing so on a warm day. The clubhouse atmosphere is invariably friendly.

Not bad! Pretty wide open but also some tight challenging shots
-greens were in great shape , definitely a little slow (local kid said there always slow ) but they were smooth at 3pm! Also mostly flat greens 8/10
-Water in play on most of the holes
-bunkers were ok, 6/10
-fairways were average for a municipal 7/10
- rough was a little weedy , not really patchy and cut to a manageable length 6/10
- few doglegs off the tee
-small but good putting green/ no driving range
- very flat I walked it easily !! 10/10. Carts looked decent non gps

This is the second time playing this course in 2 weeks. First time they had a wedding party that slowed down the course. This time there was a tournament. The course was backed up 40 minutes. It took almost 3 hours to play 9 holes

Pace of play was slow. Took over 4 to golf 18 holes. Fairly flat course for Connecticut so easy to walk it.

Friendly, reward you for loyalty

Only my 3rd time playing this course, a member of the staff remembered me, introduced himself, and let us take a cart at a discount for the 2nd 9 because we were frequent customers. Very friendly! Also numerous, clean port-a-johns on the course.

Pretty good course for the money

Fairways and greens are pretty good 95 percent of the time. Tee boxes are the best in town. We got stuck behind a foursome 2 groups up but that’s not the courses fault. Definitely a good 9 holes to play at a reasonable price