Spirit Hollow Golf Club, one of Iowa’s premier public courses, boasts a small lodge and two cabins for golf vacations. The Lodge is home to eight guestrooms, Lambo’s restaurant and a great room with a poker table, fireplace, leather chairs and a private golf book collection in the library. The Champions and Medalists Cabins accommodate up to eight guests each, featuring a great room with a fireplace, large flat screen TVs, a huge dining room table and small kitchen area. Between the two is the Competition Court with shuffleboard and Bocce ball courts and horseshoes around a fire pit. Cooking your own food or bringing your own alcohol are prohibited for overnight stays. The Shankopotamus Golf Academy features seven indoor hitting suites for year-round play. The Toptracer Range technology delivers shot-tracking and game-playing capabilities. 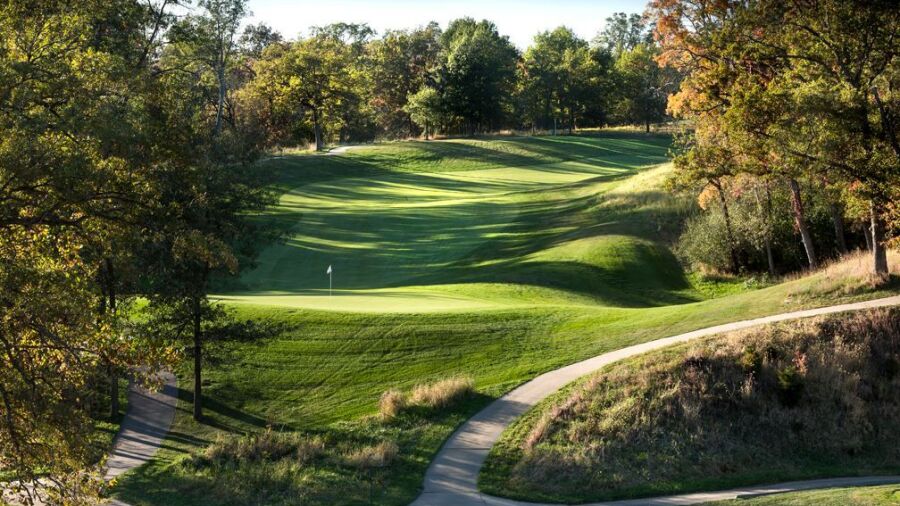 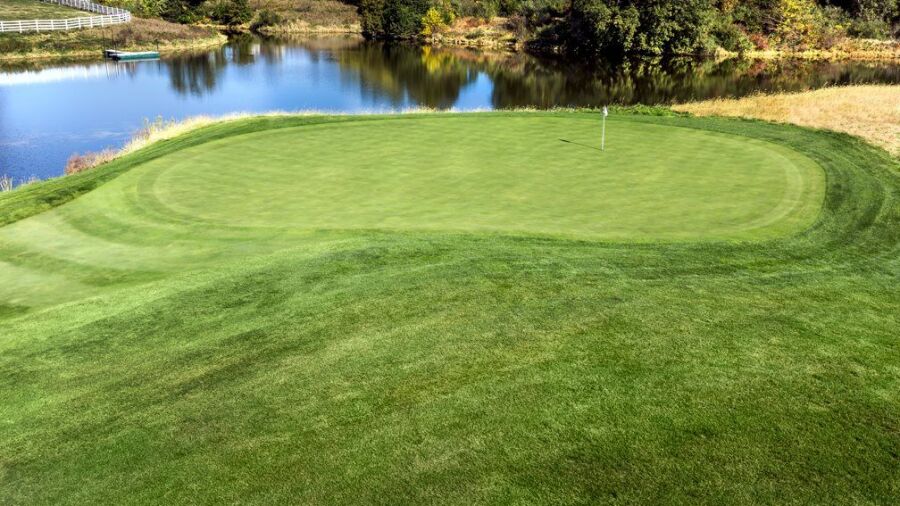 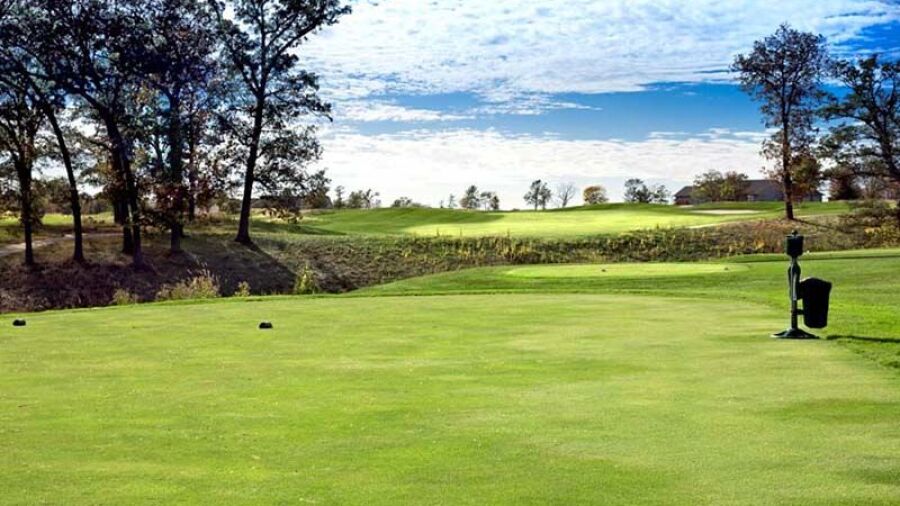 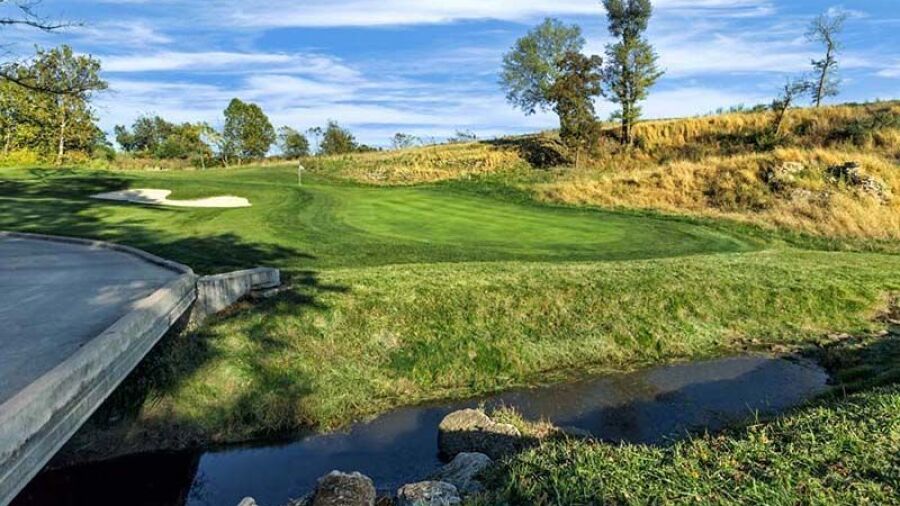 Awesome. But overpayed because of Golf Now rules

Everything was fantastic except the fact that we booked for 4 people through GolfNow, and 2 of my guys, they are brothers had a family emergency and couldn't play. I tried to find replacements but just not enough time. So I ended up paying 267 dollars for just 2 of us to play.

The 400-acre property that was previously a cattle ranch stretches across varied terrain, constant elevation changes, and natural water features.

The first two holes are good, then the course gives way to a string of rather unremarkable holes before arriving at the ninth. This short par 4 sets up what is demanded the rest of the way: wide corridors off the tee before asking for precision on approach. This is essential because the first cut of rough is extremely playable, yet unpredictable. It’s easy to get a club on the ball and through it, but flyers were prevalent. Distance control is tough out of this rough. The secondary rough is waist-high scrub that makes looking for your ball futile. I lost four strokes by hitting into it.

Additionally, chipping out of the greenside rough is tricky, and will be imperative to scoring well.

The back nine makes up for the monotonous middle holes on the front. The par 5s are deceiving. Depending on the pin placement, both are reachable, but small, severe greens make it a tall task. Laying up to the angles offered can be a better option to score.

The greens are currently perfect. Conditioning overall was top notch, but the greens are as good as I’ve putted on in a while.

Lambo’s restaurant offers cut-above options and I wound up staying for dinner. In addition to the regular range, the course offers Top Tracer bays that provide a Topgolf experience.

My only small gripe is I was told when checking in at the pro shop that they could not accept “pre-paid gift cards.” Said their system was not set up to accommodate them. That should be easily fixed so as not to inconvenience guests planning to use them.

First ever drive through window at the turn; that I've ever experienced anyway. A call box on hole 9 to call your order in. What a unique amenity.

I recommend Spirit Hollow and will be back.

Entertaining design makes great use of land’s topography. All aspects of the Course were in excellent condition. GPS on carts was a nice plus. Course is a great value - closer to Iowa City it would be much more expensive. Easy 1:15 drive from Coralville.

Well worth the drive down to Burlington. The course mostly plays through hollows and near water and natural marshlands. There are a few holes that are more flat near the highway.

Conditioning was good where it mattered. Some patchiness on some parts of the fairway. Really enjoyed the vibe here. Some light rain had the greens playing slower than I'd imagine they usually are overall. Course played long as a result as well. Very fun place to play and interesting layout and holes.

Spirit Hollow is a great course. Bag Drop attendant was super friendly. Bathrooms were super clean. Pro shop staff were nice. Course was great, awesome layout & conditions were great. Some fairways had some drainage problems. The tee boxes were magnificent. The halfway house is through a tunnel & was very unique, awesome feature. After the round, visited pro shop to maybe purchase something & the pro shop staff member was a little rude (different person than before the round).

I grew up in Burlington, IA and when I was a kid, Spirit Hollow was just a patch of woods south of town. Now when I come back to visit playing Spirit Hollow Golf Course is a must. The course is setup on the hills of a little wooded valley with a creek running through it. With multiple tee boxes you can make your round as easy or difficult as you choose. Being a fairly young course all the equipment, buildings and amenities are relatively new. State of the art GPS on carts makes yardage and club selection a snap. Pace of play is good but there are marshals visible to guaranty there are no bottle necks. The greens are fair and true but keep in mind where the creek is because everything breaks in that direction. All in all a very fun course to play!

I've lived in Iowa for almost 16 years. I live 2 hours from Spirit Hollow and have heard nothing but wonderful reviews for 16 years. I finally got to play it and I wasn't disappointed.

The condition was immaculate. The greens were true and fast, but not too fast, so I could still be aggressive. The fairways and bunkers were well maintained. I was surprised to find sprinklers in the rough, which mean the rough was thick and penal.

Overall, Spirit Hollow is worth the trip if you're in the area. I've played a lot of courses in the Midwest and this ranks up there with the finest I've played.

So, I’m going to start with something completely non-golf (because I’m afraid I’ll forget it). As you play down through the green on the first hole, don’t forget to look back and take in the old cabin on the hill on the right as you look back… it’s pretty cool (pic included in this review).

Spirit Hollow was a slightly different experience for me (especially on this trip). I almost always set my tee times for early in the morning (first out as often as possible), I really like getting first tracks when I can. However, do to scheduling I wound up going out as a single at 3:00pm. This put me behind several larger groups so the play was a bit slower than I’m used to; however, this gave me a chance to really take in the course as I went. Something my typical three hour rounds don’t always allow me to do.

Spirit is a nice course that can play quite long. The blacks I played were a rather pedestrian 6589 when compared to the gold tees in back at 7550(!). In my entire deck of 39 cards from this trip, there is not a single course that opens up this much between the back two tees. I like a good challenge, but that one was enough that I left it for next time.

The course features a decent amount of elevation change but as I recall mostly plays downhill with lots of cart paths taking you back up. This provides for plenty of great vista’s from the tee boxes. The most fun I had was on the par 5 18th hole where the two groups in front of me got backed up on the green and layup area, leaving the entire fairway landing area free for me. I took advantage of this and let a few balls fly after putting my first drive safely on the deck. You shoot over a creek that runs at an angle away from you, so it’s a “bite off as much as you think you can chew” tee shot. Having placed one safely on the fairway and having nothing to do while I waited… I got to test out “my appetite” (turns out my eyes were bigger than my stomach, and I just lost a few balls… but I had some good fun).

The golf, in general, was good. This track offers something for everyone including a fun risk/reward poke over some (pretty tall) trees on the dogleg left 14th hole. I took that rout successfully with a 3 wood and was rewarded with just a wedge into the green and my only birdie on the day (there were other scoring opportunities, but I strained my oblique on the first hole and had trouble with my swing most of the way).

With the exception of one hole that is undergoing a major renovation (obviously not a neglect issue), the course was in very good condition, which was impressive given the number people that had gone through the course before we did. The staff was friendly and engaging and seemed genuinely interested in our trip and helping in any way they could. Other than one group (which, thankfully, only played 9 holes) the pace of play and the other players were friendly and a pleasure to chat with as well.

I’d certainly play Spirit Hollow again if I were in the area.

What a great golf course...be sure to select the correct tees depending on your skill level...Spirit can stretch to around 7300 yards but they have several options that are shorter that make it very player friendly...there are some hole that are both beautiful and challenging at the same time...and they have stay and play packages available right on sight. I would recommend a trip and play Spirit Hollow to any golfer at any skill level...you will find it an enjoyable day!!