Traditions at the Glen

About Traditions at the Glen

The Traditions at the Glen marries the charms of the past with the convenience of the present. Guests can stay in rooms and suites in a historic mansion tied to some of the greatest names in U.S. politics, sports and business. The classic golf course, played by legends like Ben Hogan, Sam Snead and Bing Crosby, also offers Footgolf. Hiking and biking is available throughout the 650 acres of the surrounding natural Glen. The Tavern and Bogey's Grill feed visitors, while a spa relaxes them.

Golf courses at Traditions at the Glen

Images from Traditions at the Glen 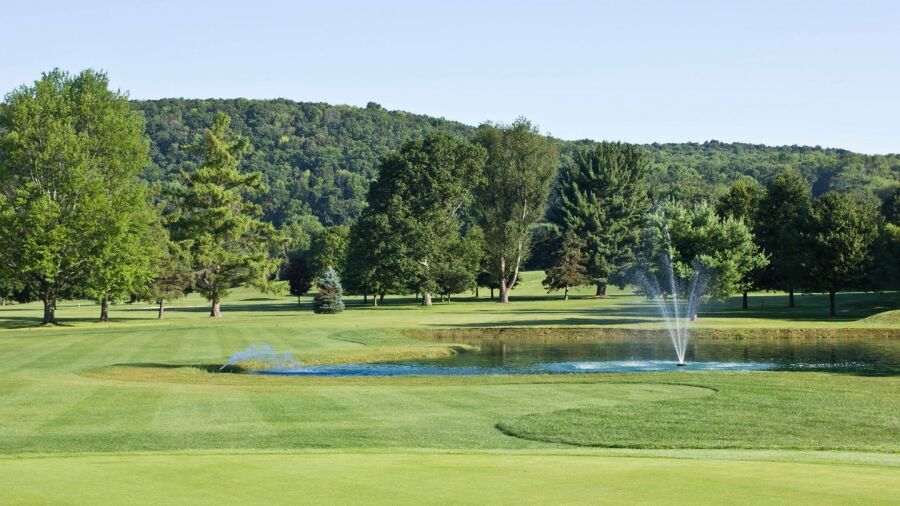 A sunny day view from Traditions at the Glen 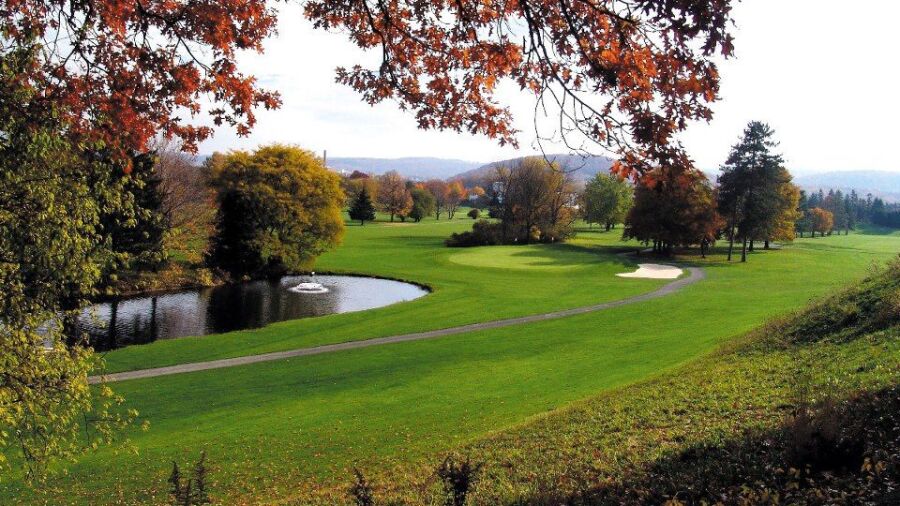 A view of a fairway at Traditions at the Glen 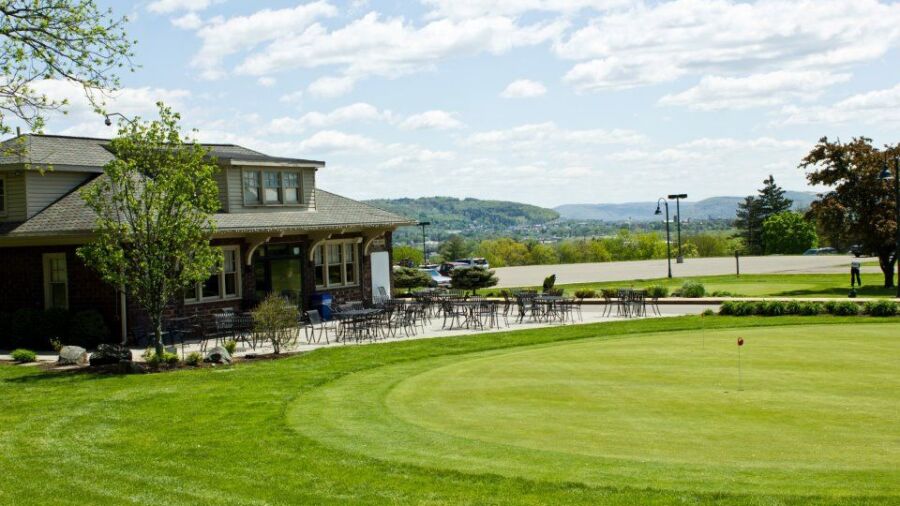 Advanced Filters
Traditions at the Glen

So I reserved a 845AM tee time on a Sunday. Pace of play was a bit slow, but not too bad for a busy Sunday. Around 1130-1145 AM my group reached the 17th tee box. What we found was there was a line of 4 groups waiting to play the hole, with two groups still on the hole. What happened was the Director of Golf decided to send out a shotgun start tournament, with two groups per hole, out on 17 and 18. Holes 1-9 also had a shotgun start as well. My quick estimation had about a 45 min wait just to tee off on the 17th, and with 2 groups on 18 as well, I estimated close to 2 hours to play 2 holes. This was when we decided to call it quits. Along with 2 other groups waiting.

I went to the pro shop to voice my concerns with the situation. He director of golf, Brandon, started the conversation with “I have much more important things to be doing.” He also called me a liar when I described the situation, and told me it was our choice not to play the holes. No apology was offered, no compensation, and all I received was argument and from Brandan. Who proceeded to walk away from me instead of taking care of an unhappy customer.

The course itself is not in great shape. The greens roll OK, but the fairways are covered in crabgrass and dead spots, and the tee boxes are 90% divots. To then be treated like this by the “director of golf” after HE made a terrible decision that caused multiple groups of paying customers to not finish their round, just makes me want to warn everyone and anyone thinking about playing here. I was also told I should’ve “asked ahead of time if there was a tournament” REALLY? I’ve been playing golf since I was 9 years old, going on 23 years, and I’ve never seen a golf course do something like that. I get upset when the course sends a group off the back 9 as you’re making the turn, but that’s a rarity as most course are run properly and know better. Except this was 4 groups, all at once. Its one thing to make a bad call, which this was. It’s another thing to call a customer a liar when they tell you about it, and not offer any apology or compensation. I would’ve been appeased with an apology and a $10 giftcard or something. Good customer service would’ve been to offer a 9 hole rain check with SINCERE apology. I will never return to this course.

in convenient bag drop pro shop spread out staff friendly but not real helpful. got great deal on golf now. 5 hour round never good. nice views hilly course, fairways could have been mowed greens ok could be faster. over all though i would play it again but was expecting better conditions course could be a 4 or 5 but i give it a 31/2 for today

Great course! More than friendly staff! I play this course one to two times per week! Favorite course for the money in the area

The course was okay. You did not return to the clubhouse after 9 holes - they didn't tell us. They have a halfway house, which was closed. Tried getting drinks out of a soda machine - was not working. Tried a water cooler - water tasted like sulfer. Awfully hot for not having any water or refreshments on the course. Very long and frustrating day! Will not return.

Traditions have done a great job keeping the course in good condition this fall. The course was clear of most leaves and did not hide the balls. Staff was very nice.

Traditions is an older golf course where riding is a must. The layout is decent but with today's golf technology even the mid- high handicap can score here. Most of the holes are short by today's standards, but it's worth a round.
The conditions were fair, it could use some TLC , otherwise look for special deals to play usually on golf now has some pretty good rates.

I've played this course many times, dating back to its heyday as IBM CC. I only play it once or twice a year now as It's really not worth more than $35 these days. On this particular day the greens were decent but tees and fairway grass was unacceptably high. I rated conditions as "average" but they don't measure up to other courses such as enjoie or links at Hiawatha.

Out of the blue

This was a last minute change for us as we did not see this in the list at the star. Arrived at the course and loads of parking for a Large Car Truck.
The staff was awesome, Naomi was a pleasure to all with, She is he Head Pro and is very pleasant, Rick was also a nice person with great info on the course. Thanks to the both of them. The course was tuff from the blue tees as it rained in the AM and you got no roll at all and on some drives it plugged but the rain was massive in the AM.
Great test for good golfers on their target playing, Undulating Fairways and uphill shots and down hill fairways. This is a must if in the area.

I played this course early in the year and it was a disaster. The course was terrible and the carts were shot. They charged me $44. I played again recently. I believe they now have some newer carts. I think the price has been lowered and the course is now in better condition, although there are some greens that could use work.

With a $34 weekeday price, I'd recomment it (if the snack shack was open alllllll day). If it goes back to $44, no thanks. Too many better courses around here. Conklin is $44. Traditions doesn't compare.

Very annoying that the snack shack doesn't open till later in the day (they said 3:30, but at 3:40 no one was there). Nowhere to get a drink or snack since the crazy course layout never takes you by the clubhouse. An open snack shack is a must if the course is open.

Additionally, we played a day or two after a lot of rain. The bunkers were filled with water. They were like ponds. No one had touched them... whereas when we drove by The Links, they were out working their bunkers that morning. Hmmm, maybe $34 is still too much if you're not going to maintain your bunkers after a rain.

Frustrating... it used to be so nice there.

Course is always one of my favorites when I come back to the area. Deal was amazing on golf now. They look to be struggling just a bit with a couple of the greens but the deal was too good to complain about a green or two. My biggest issue for the day was it was pretty hot for the triple cities(90°)+ and there was not a single water jug to get a drink and since it was a weekday the concession stand at the turn waa closed. Needless to say it was a tough day. A fun layout that holds many good memories from my childhood.

Been two years since golfing here and it seems to have really gone down hill. The greens were in poor shape, shaggy and bumpy. The tee boxes needed work, and the rough looked like it hadn't been cut in weeks. Fairways were OK. There are better courses to play in the area for the price.

For the price that they regularly charge there are many other courses for less that are better maintained. The greens were shaggy, some had ant spots and patches. Fairways were good and staff is friendly. Price does not reflect quality this year!

I have played Traditions many times before but this year they are off to a rough start. The greens are extremely shaggy and not kept up to what you would expect for over $40 a round. No water on the course or beverage cart on an 80+ degree day. Otherwise the rest of the course was in pretty good shape.

Attendants were cheerful and ready to help, we got checked ,got our cart and were on our way! Greens were green and soft. Fairways were just being cut.

Traditions at the Glen (formerly Heritage CC) was designed as a country club for IBM employees back in the heyday of the triple cities. IBM is long gone and the course has changed hands a couple times. The original 9 hole executive course is also gone and has been replaced by "foot golf" (dumb). The course's fountainhead was originally the old country club building, which you'll now pass on holes #11, 16 and 17. As a result of the re-route, the course doesn't seem to flow quite right, and you don't come back to the new clubhouse on the turn. There's a small snack shack near the #8 and #15 tee that's sporadically staffed, depending on the season. The course is quirky in spots, but the conditioning is generally good. My most recent round had us raving over the perfect green conditions, though the rough could have used a trim. Carts are gas powered and in decent shape. The traps are generally decent and playable. There's alot of elevation change here and some blind shots to go along with it. All in all a good play if you can get a discounted rate. I never pay full price to play here.

Nice place that I would recommend. Played in September and after the summer it was still in really good shape. Nice mix of holes.