Few names in American golf course architecture generate as much reverence as Donald Ross. A Scotsman by birth who grew up playing Royal Dornoch and apprenticed under "Old Tom" Morris in St. Andrews, Ross came to the U.S. in 1899. Between then and his death in 1948, Ross designed 413 golf courses in the New World (397 in the U.S., 14 in Canada, and two in Cuba). Although a number of these layouts have since been lost to development, or ham-handedly redesigned, those that remain intact continue to serve as inspirations and models for most golf course designers today.

Early in Ross's career, golf courses were built by hand, using shovels and ploughs drawn by oxen (though toward the mid-1900s, heavy motorized machinery became widely used). As such, Ross's routings are generally compact, with short walks between greens and tees, and his courses were also designed to be traversed on foot.

It was at Pinehurst No. 2, arguably his most famous and enduring design, where Ross converted the oiled-sand greens to Bermuda grass, thereby altering the face of warm-weather golf forever. Those small, domed Pinehurst greens have come to be associated with Ross putting surfaces; however, a wider survey of his work reveals a wealth of tiered, frequently severely sloping greens. Whatever their design, though, a hallmark of Ross greens is that they repel poorly played aerial shots, but are receptive to run-ups. However, any miscalculation usually results in shots that roll off the back or sides of the putting surface into deep collection areas that are as penal, or more so, than actual hazards. Today, many of these areas are closely mown and encourage putting, but in Ross's day, they required a deft chipping touch from intermediate rough.

Although much of Ross's work has become obscured by time, erosion, and the demands of newer, longer equipment, modern-day course owners and architects are making efforts to restore the original features of his classic layouts. For example, the Donald Ross Course at French Lick Resort in French Lick, Indiana, dating from 1917, underwent a $5 million renovation in 2005, restoring all greens and bunkering to the specifications of the original Ross blueprints. Most famous of all is the renovation of Pinehurst No. 2 by Bill Coore and Ben Crenshaw, who used 1940s-vintage aerial photos of the resort to restore the host of the 2014 U.S. Open to the original wide-open, strategic, minimalist brilliance that epitomizes the enduring legacy of Donald Ross. 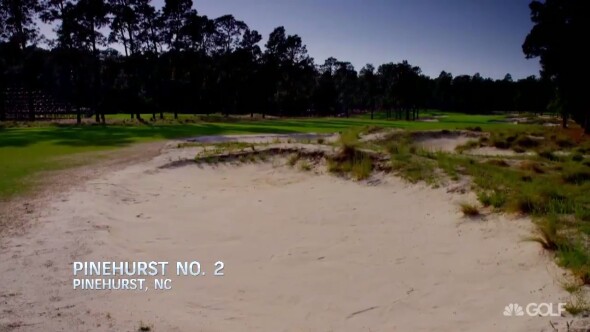 Video
3:18
Tips for playing Donald Ross designs
favorite_border
Golf Channel Morning Drive's Matt Ginella is joined by Director of the Donald Ross Society Brad Becken, who talks about the preservation of Ross designed courses and what your strategy should be for playing these gems.