About The White Mountain Hotel & Resort

The White Mountain Hotel & Resort welcomes guests with mountain accommodations, tasty cuisine and classy amenities, including an outdoor heated pool and hot tub, fitness center, Finnish Sauna and massage room. The Hale's Location Golf Course might be the state's top nine-hole course. As for the dining, choose from the Ledges Restaurant or the Tullamore Tavern. Full breakfast is complimentary. 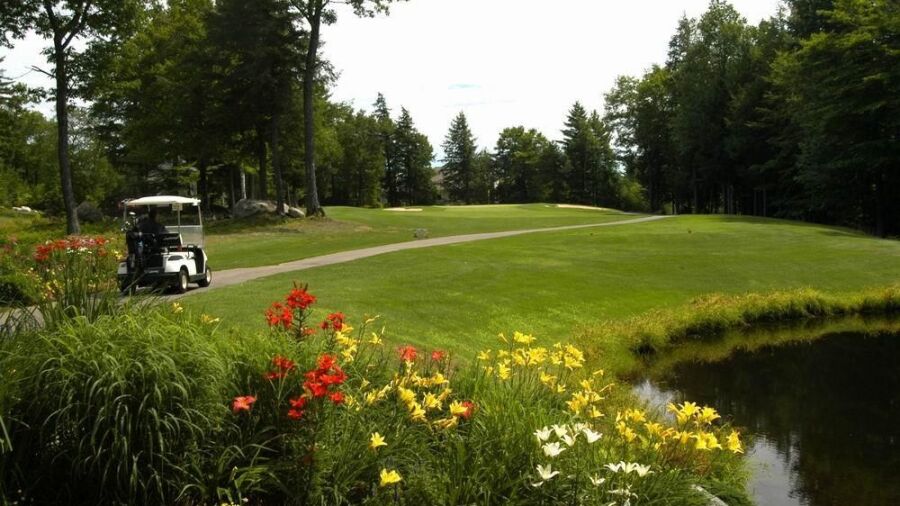 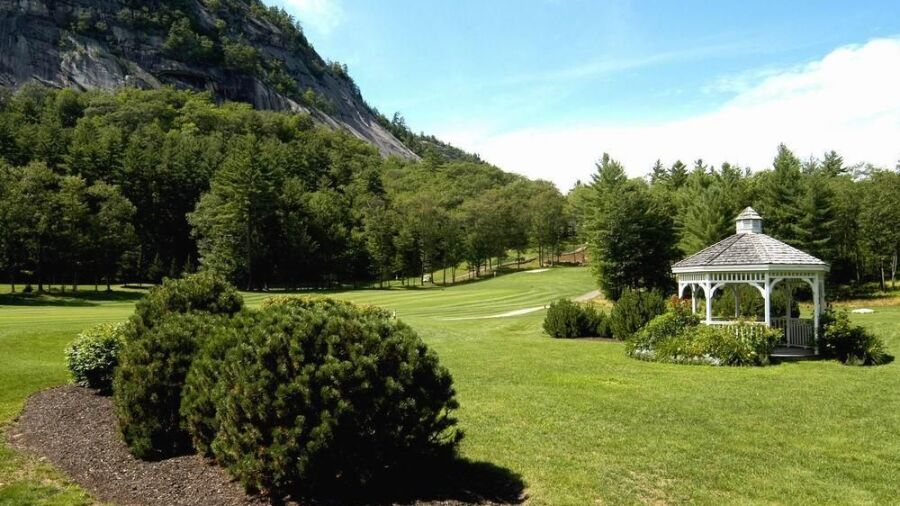 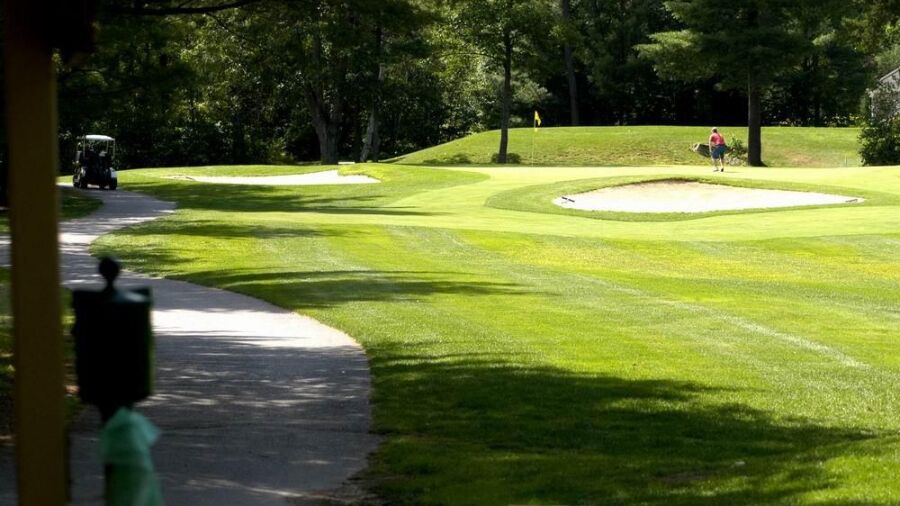 It was a little off-peak for the foilage, but the course is still beautiful. And staff are nice, course are well maintained. Would come back in future.

From the first hole at Hale’s Location, it’s pretty clear what is to come. Just beyond the tee, the hole plunges to a green expanse of fairway that bends right among towering woodlands. Three huge bunkers are visible at the far end of this 500-yard par-5, set into the face of a sizable knoll on which lies the first green.

The course was designed by the late Albert Zikorus, who created many sound and challenging courses where I mainly play golf–in Connecticut. The design is both interesting and enticing, comprising features and hazards that combine toughness with plenty of scoring opportunities. It is worthy of note that the track could have been made much more penal, by adding a slew of photogenic water hazards and tricky doglegs or awkwardly twisting fairways. Yet Mr. Zikorus did none of that, and the course is perfectly fine without it. What distinguishes Hale’s location, even beyond all of this, is a spectacular setting, with the White Mountains as a nearly ever-present backdrop.

SETTING
It is not unusual for a New England course to wind beautifully, as this does, through serene woodlands. Hale’s Location adds a placid residential community, replete with handsome homes, but mostly these are set well back from fairways and greens, if at all present. Yet the biggest scenic attraction–an awe-inspiring one–may well be White Horse Ledge, its imperturbable face looming up gigantically near the north end of the course on its western flank. The massive ledge continues to form an impressive backdrop for several holes around the golf course. From the eighth tee, as well, Cathedral Ledge is clearly visible, not far in the distance; from tee and green of the fifth hole, dazzling vistas stretch into the receding layers of mountains.

HAZARDS & DEFENSES
This is an almost ideal resort design in terms of its difficulty when taking into account its USGA stroke ratings from the blue and white tees: 69.2 versus 67.8 respectively (versus par 72). It’s not too hard, then, for men, most likely because none of the par-3s and 4s are long. For women this course is rated quite a bit harder. The two most significant hazards here are the numerous bunkers and the woods. What’s most liable to add strokes to your scorecard, however, are dense trees, which may swallow your golf ball whole, never to return again. Some of the fairways (for example, the first, may have out-of-bounds stakes on one wooded side of the fairway, hazard stakes on the other. Well-placed bunkers are frequent, large, and deep. Only the 9th has no fairway bunkers, and around nearly every green lie at least two traps. Zikorus designed fairway bunkers, especially, with some flair and variety; they will penalize both hooks and slices about equally off the tees. The other difficulty with this course is its slopes. On holes like two, four, and seven, the ground movement on the fairways requires some calculation if you’re to play the bounces right. Even more important are the major plateau greens at one and nine, where the rise from the fairway is some thirty to forty feet, while two and four green complexes are almost mini-versions of these. Trouble, trouble, trouble. It bears mentioning, though, that the slope is 127 from the blue tees, and 118 whites–in other words, the overall difficulty of these nine holes is manageable for the typical golfer, yet much tougher from the blue tees; they average about twenty yards longer per hole.

Two Great Par-5s: 1st Hole, 502; 5th Hole, 495.
The first may be more stunning from its very high tee, yet five has the lengthier, wider vistas into the mountains from either tee or green. Still, playing the first, although it demands an incredible second shot (should the player dare try to reach the elevated putting surface in two), is a bit less strategic than at the fifth, where playing the fairway angles and negotiating the fairway bunkers is more complex, and a right-side line of play is the more dangerous one on the second shot. The fairway bunkers are also huge and await slightly misplayed tee shots. Bottom line, though: Neither of these holes will give up birdies or eagles without some stiff resistance.

Number Two; Par-4: 320.
The scorecard shows 320 yards; the hole plays more like 370 because the tee ball will be hit steeply uphill to a relatively flat landing zone. Green number two, set upon a plateau, is further defended by a big, deep right-flanking bunker and two smaller ones on the left. A strongly canted green leaves three-putting as a distinct possibility.

Number Four, Par-4, 291.
A deceptively tough short hole starting with a downhill tee shot and a great view of the target area, which is highlighted by three right-side traps. It’s reachable in two, but only by very long, very accurate ball-strikers.

The Ninth, Par-4, 374.
The course makes its last stand in dramatic fashion. The good news is that this finisher is not a long hole; the bad news is that its approach shot plays uphill to a monstrous plateau. The key: avoid the extreme right side of the green, which slopes off enough to bounce golf balls down the huge right-side falloff, where getting up and down will be quite difficult.

CONDITIONING:
Essentially what I’ve seen in private courses: first-rate greens along with their surrounds, good roughs, outstanding bunker conditioning.
Some of the tees lagged a bit; fairways were good and playable considering the very dry recent conditions. But to complain is to quibble.

WALKABLE?
Okay, but with some caveats. I walked it today and “succeeded,” but the climb back to the clubhouse following the ninth was fairly brutal. Unless you’re really fit or a hiker, opt for a cart.

SOME CONCLUSIONS:
This is a picturesque, challenging, and rugged golf course, but that ruggedness never seems extreme save for at the second fairway and at the somewhat towering, final green siting. Moreover, the overall challenge never overwhelms. The par-3s and the eighth hole are comparatively flat, as are the fairways on the par-5s. With or without a GolfPass deal, the value provided here is unbeatable. Hale’s Location is not only thrilling to play but also highlighted by backdrops of surpassing beauty on every hole.

This course is a great 9 hole course on the edge of the White mountains. My wife and I enjoyed the round including some beautiful vistas.

My wife and I really enjoyed playing here as the vista's are very impressive. Accuracy was important but with shorter fairways it was still quite playable.

Love this 9 hole gem almost right downtown and easy to get to! Nothing Executive about this course , it's not easy like most 9 hole courses , it's a real test of golf! Greens are great and roll true , just in good shape all around!

Decent course with decent layout but it's short and they charge way too much for the cart. ($32 for 9 holes.. just for the cart) Best to walk.

We reserved on GolfNow for 18 holes for 3 people. We ended up paying double amount due to GolfNow online glitch . We thought it was error on our part but spoke to 2 other group of golfers who it happened to as well. Not happy!