Railroad Ties: The legacy of the Canadian Pacific Railway Co. and golf in Canada

The Canadian Pacific Railway Co. has helped define the country’s golf landscape for well over a century. Since its founding in 1881, the firm has transformed Canada, linking it by rail and steamship from the Atlantic Maritimes and Quebec across the Canadian Rockies to the Pacific Northwest.

Along the way, it has created some of the country’s grandest hotels and golf courses, providing a powerful incentive for Americans to travel north of the border to sample the great outdoors.

As a company historian attests, those hotels started from modest efforts and grew to become closely identified with CP.

Rest houses were constructed along the line in 1886 in order to provide meal services and sleeping accommodations for railway passengers. At first this was done simply as a cost-saving exercise to prevent the railway from having to pull heavy dining and sleeping cars through the mountains. But the hotels ultimately became so successful that they expanded rapidly and grew to become their own line of business.

CP ultimately divested itself of the hotels. Today, most of them are operated under the flagship of Fairmont Hotels and Resorts. And while the direct operation of golf ended in 1968, the company’s commitment to the game was revived in 2014, through what will be a ten-year-long underwriting of Canadian women’s golf most prestigious championship. The firm is title sponsor of the LPGA CP Women’s Open at Wascana Country Club in Regina, Saskatchewan, Aug. 23-26.

Wascana C.C. dates to a 1911 design by a Regina-based golf professional named W.H. (“Bill”) Brinkworth. The course straddles Wascana Creek and its surrounding wetlands and floodplain. There’s no direct connection between CP and development of the golf course, though the host hotel for the CP Women’s Open is the famed Hotel Saskatchewan, five miles to the northwest in downtown Regina. The 10-story, 227-room building in the Modern Classical Victorian style opened in 1927 as the fourteenth of Canadian Pacific Railway’s hotels across the country – all designed to elevate the standard of travel along the train line.

Elsewhere, CP did undertake golf as a hotel amenity. The most ambitious of these efforts came in downtown Toronto, where in 1929 CP opened up the Royal York Hotel, a 28-story, 1,365-room Chateau-style hotel that for a year was the tallest building in the British Empire. More importantly for golf, CP also commissioned Canadian architect Stanley Thompson to design and build a golf course 10 miles to the west, reachable by a rail line, that would serve hotel guests looking for an elegant game. The golf course he created, originally called Royal York Country Club and changed to St. George’s Golf & Country Club in 1946 when the hotel divested itself of the golf club, remains to this day one of Thompson’s most distinctive creations.

Thompson (1893-1953) was one of golf architecture’s most flamboyant designers. Like too many of his colleagues, he drank and smoked himself into an early demise. Yet he left behind a legacy of 140 projects across Canada and the northern Midwest that displayed a flair for the outré – massive mounds, sweeping side slopes next to elevated greens, and a commitment to the scenic background as an essential part of the golf hole. A founding member of the American Society of Golf Course Architects, he was in the 1920s and early 1930s a partner to a young Robert Trent Jones, Sr.

Thompson's work at two Canadian Pacific golf projects in the mountains of Alberta remains colossal in scale and iconic in visual impact. Thompson’s Jasper Park Lodge Golf Course, opened in 1926, was an undertaking of Canadian National Railway – a rival firm to Canadian Pacific. The success of that resort prompted CP to upgrade dramatically its own resort at Banff Springs, 175 miles to the south and sitting 5,000 feet in the dense woodlands of the Canadian Rockies. 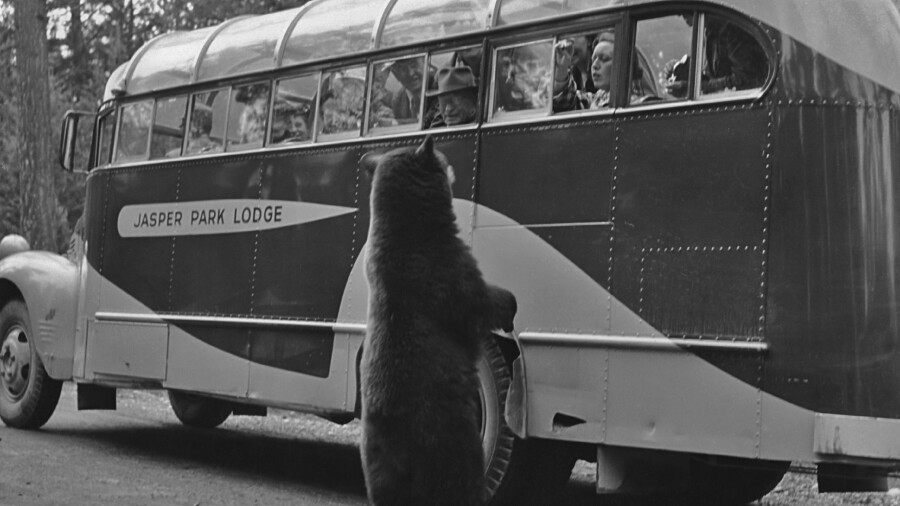 A curious bear takes a look at tourists on a tour bus in Jasper Park Lodge in Alberta, Canada in the 1950's.
Herbert/Archive Photos/Getty Images 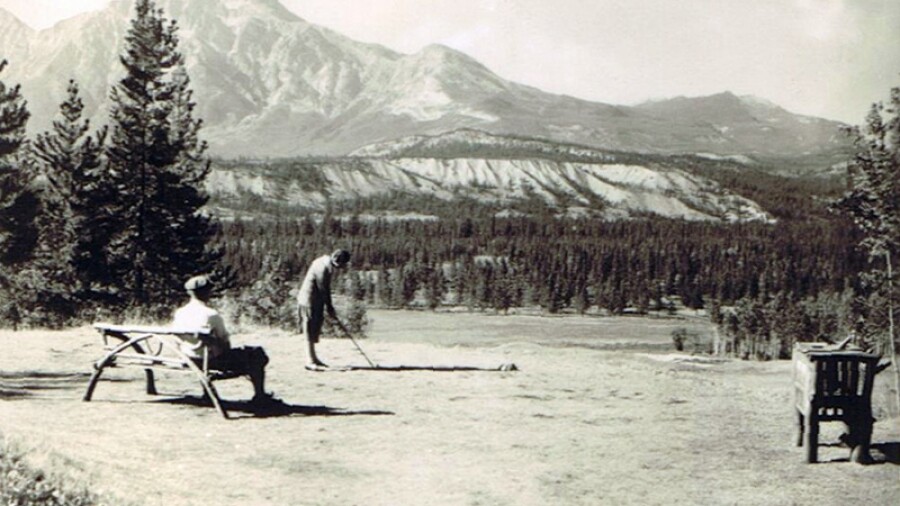 The par-3 9th at Jasper Park Lodge is one of Canada's most famous par 3s. Fairmont Hotels 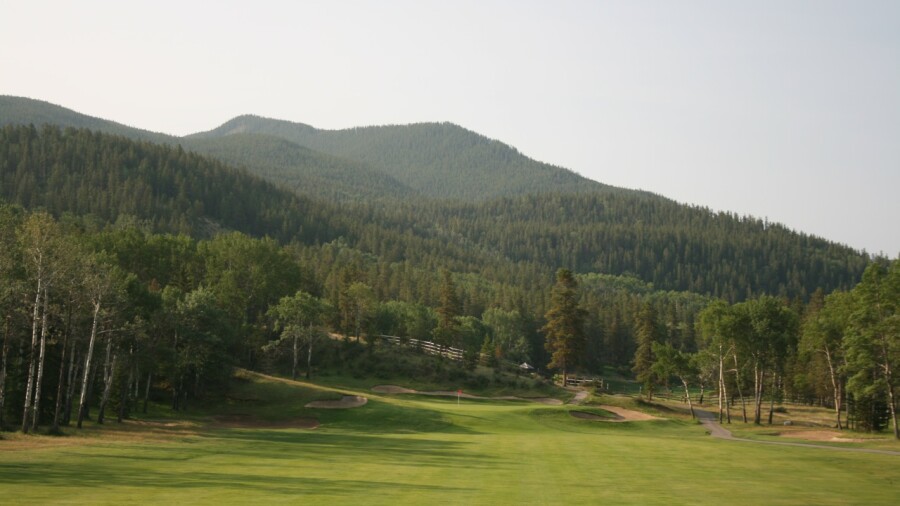 Fairmont Jasper Park Lodge has one of the most spectacular national park settings in the world and is playable for all levels. Brandon Tucker/Golf Advisor

The Banff Springs Golf Course evolved in stages, all under the railroad’s aegis. It started in 1910 as a rudimentary nine-hole layout by a Winnipeg-based golf pro, William E. “Bill” Thomson. No less a luminary than Donald Ross came on board in 1917 to design an additional nine. But it was Stanley Thompson’s complete reworking of the course in 1927-28 that made Banff famous. “Golf on the Roof of the World,” was the club’s motto, and that sobriquet fit the National Park setting.

From an elevated tee backed up to just in front of the 800-room, Canadian Chateau-style hole, golfers tee off across the Spray River to the fairway of the par-4 15th hole, 100-feet below. Even more compelling is "Devil’s Cauldron," the 192-yard, par-3, fourth hole, played across a lake to a green sitting at the foot of the sheer rock face of Mount Rundle.

Another of Canadian Pacific’s iconic golf resorts can be found in St. Andrews-by-the-Sea, New Brunswick, at the point where the Canadian Maritimes share a body of water with easternmost Maine. The Algonquin Resort, acquired by the railway company in 1903 and rebuilt following a fire in 1914, is a 233-room Tudor Revival spa that features a golf course at the peninsula where the St. Croix River empties into Passamaquoddy Bay and from there to the Bay of Fundy.

Donald Ross ventured on site in 1927 to create a full-length 18-hole course and a sporting, shorter nine-hole layout for The Algonquin. The course has since been rerouted, first by Canadian Tom McBroom in 1999 into a single 18-hole layout and most recently by Rod Whitman (following the success of his Cabot Cliffs Course in Cape Breton, Nova Scotia. The Whitman renovation, debuted in July 2018, brings the course closer to waterfront and makes use of dramatically exposed long views across the site.

There’s a strong tradition across the Canadian frontier of grand hotels and golf. Canadian Pacific Railways was early in its commitment, and the investment was emulated by other railway companies and by subsequent hotel firms seeking to utilize the rich natural resources of the country’s scenery. Among them: Fairmont Chateau Whistler, British Columbia, with its circa-1988 Robert Trent Jones Jr. golf course; Fairmont Le Manoir Richelieu in La Malbaie, Quebec, whose Herbert Strong-designed layout opened in 1927; and Fairmont Le Chateau Montebello, Quebec, the world’s largest log building, with a Stanley Thompson layout from 1930 cut through dense rolling woodlands.

At the CP Women’s Open, the LPGA will be celebrating Canadian golf. That includes recognition of the title sponsor's longstanding role in development of the game.

By Jason Scott Deegan
Read More
Load More
Articles
Now Reading
Railroad Ties: The legacy of the Canadian Pacific Railway Co. and golf in Canada
New Cookie Policy
WE AND OUR PARTNERS USE COOKIES ON THIS SITE TO IMPROVE OUR SERVICE, PERFORM ANALYTICS, PERSONALIZE ADVERTISING, MEASURE ADVERTISING PERFORMANCE, AND REMEMBER WEBSITE PREFERENCES. BY USING THE SITE, YOU CONSENT TO THESE COOKIES. FOR MORE INFORMATION ON COOKIES INCLUDING HOW TO MANAGE YOUR CONSENT VISIT OUR COOKIE POLICY.
CONTINUE
Search Near Me