The course was in excellent condition and a great value!

Golfnow is a joke!! Got to the course and they very politely informed us that Park Hills did not participate with Golfnow and have many several attempts to be removed. They had an outing that day and unfortunately were not able to get us on. Thank you Golfnow for the wasted time driving an hour to get there for no reason!

When checking in at the Pro Shop, the woman attendant was less than friendly. She stated that she had no reservation for me (I had the confirmation on my phone and was directed back to my car to get a hard copy for her convenience to show to her boss). She stated they did not do Golf Now. While I had gone back to my car for the hard copy another many showed up for the same tee time - 11 a.m. with a confirmation from Golf Now. She was extremely rude to both of us as she told us she had someone else booked for 11 a.m. but instructed them and us to go check in with John outside and he would work us in. John was extremely nice and apologetic but because there were 4 groups teeing off at the same time it made for a very long day waiting.....

Horrible Setup For a Golf Course

There is people driving right towards you while at the tee box, half of the tee boxes are so far away and hard to find. There was 4 of us and all agreed it was the worst course we ever played and this year alone we have played about 20 courses between 5 States

Beautiful surroundings minutes from all conveniences

Always enjoy golfing this course. Well kept. Beautiful restaurant on premises with gorgeous view from the upscale outside patio. Course is challenging but enjoyable.

Used to play a lot better

I’ve played this course in tournaments before and saw a sweet deal to come back and play. The young man in the cart barn greeted me and was a super sweet guy! The course played extremely rough. The course was not playing as well as it could be. The course was hard as a rock and looked like it hadn’t been watered in days. Hole 14 needs fixed bad! I played there 3 years ago and it had a beautiful pond to shoot over for a par 3. It has now dried up, and they let it get over grown, very disappointing seeing that. Hole 9 had an illegal pin where it was placed on a slope and it had rolled about 3 feet past the hole from a ball drop twice. Also there were illegal pins on 16 and 17 where they were not a minimum of 5 paces off the edge of the green. Another thing that was scary was that sitting on 11 tee the wind blew and it was so dry you could see the dirt blowing away in a dust cloud. I love this course for all it has to offer and the great events they put on, but I think in a couple more years if they decide to start up keeping the course it would play much better.

Short course, 6000 yards from the back tees. Wide Open fairways. An average golfer easily recover from errant drives on most holes. Greens are pretty fast. The course was in great condition.

Course was wet but probably from recent rain. The greens were nice but very inconsistent. Beautiful club house and bar! Excellent outside seating area excellent selection of craft beer. Overall I enjoyed my experience at this club and recommend giving it a try!

Course was in excellent condition. Tyler and his staff were more than friendly and accommodating.

Very nicely groomed greens were well groom nicely cut fairways all tee boxes had a lot of divot repair made footing on tee shots a little difficult!!!! The signage between holes made it little difficult for someone who hasn't played there before!!!! But I would play again!!!!

Up and down, what a beautiful course in the rolling hills of central Pa. Front nine is interesting and layout nice, but when you hit the back nine, you better check your bag for extra beer. Back nine is not for the hacker, which is why most people I noticed quit after first nine holes. Greens putt true, and were fast. But man, course is older in design and I do say I played great and shot 90. Take extra balls. Staff was si kind. I called them and they directed me when I got lost in Altoona as Google sent me in wrong area. Even though you can see course from Route 99 in both directions, it is very hard to find a quick entrance. Use another app for directios. Huge bar and great food affirdably priced, and if it were not for a foursome that played the final four holes like th US Open, I would give my experience the highest mark, A+++. So, I will be back, a plenty. Bring camera, you take photos, believe me.

Played this course in some unfavorable conditions. Had winds of 25 to 30 mph. Almost all the greens had a fair amount of slope on them to begin with, but they were cut so short and rolled so fast it was almost unplayable. Unless you were below the hole and made your putt, your were in for a much longer second or third putt. Just missed a 10 foot putt from a side slope, the ball almost came to rest just below the hole, then it began a slow steady roll 30 feet off the green. Had another ball I was about to putt, and the wind got it loose and it rolled 15 feet down the green. Course was under construction, and it was wet and cold out, but I still enjoyed it. Some beautiful views and some challenging shots. Number 11 from the tips is hit the green or forget it. 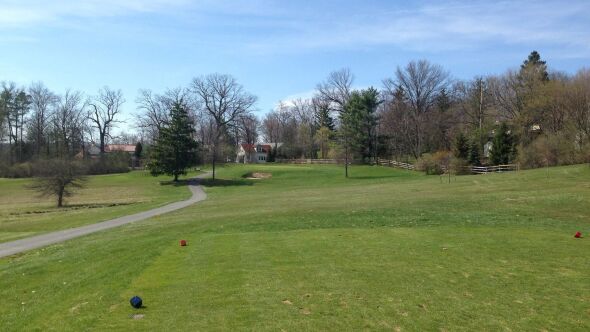 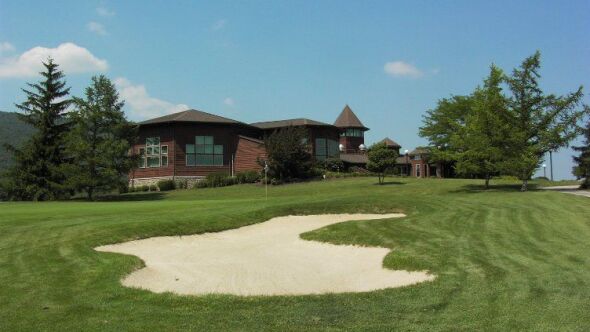 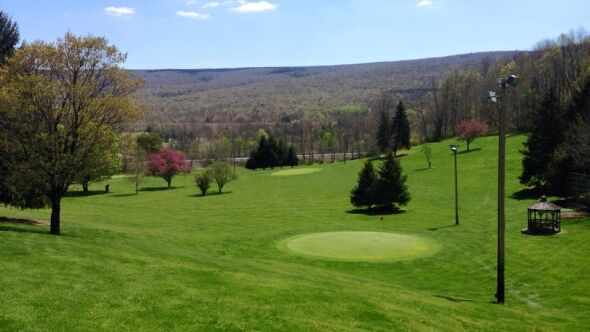 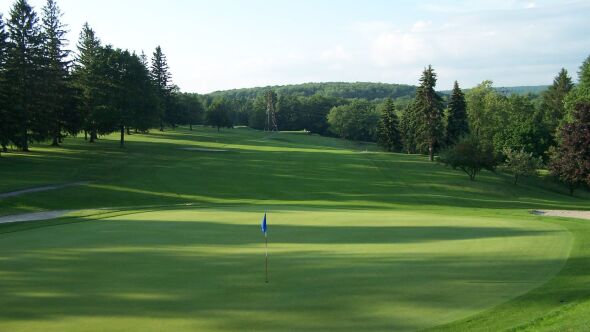 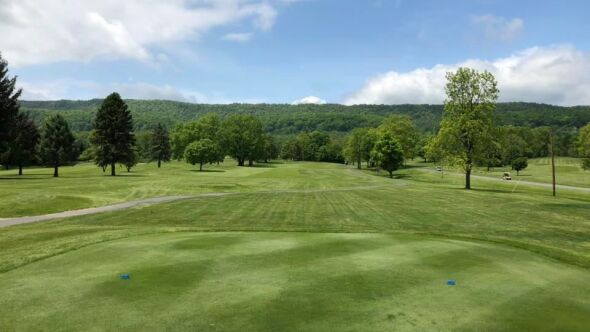 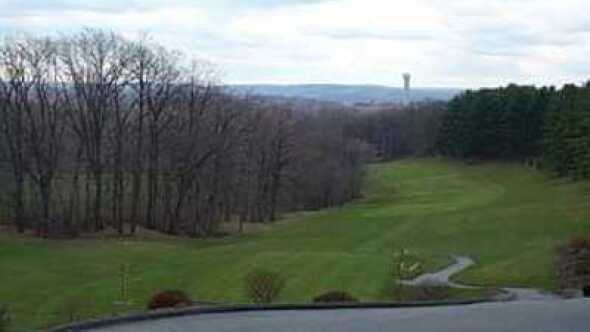 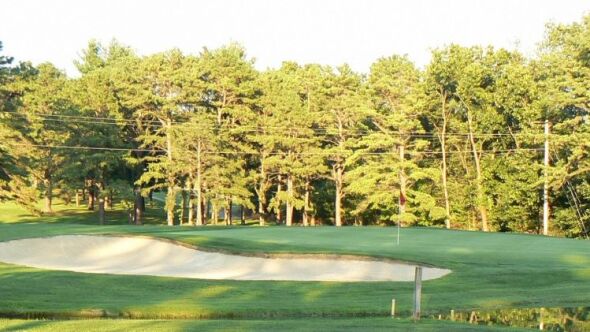 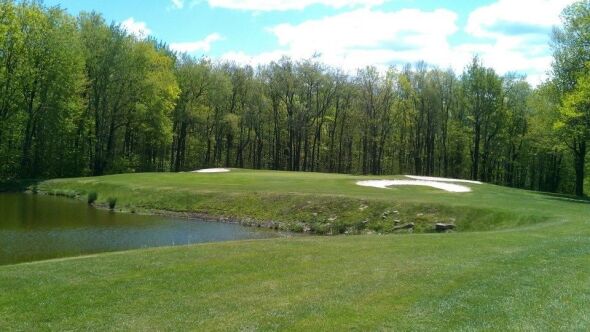 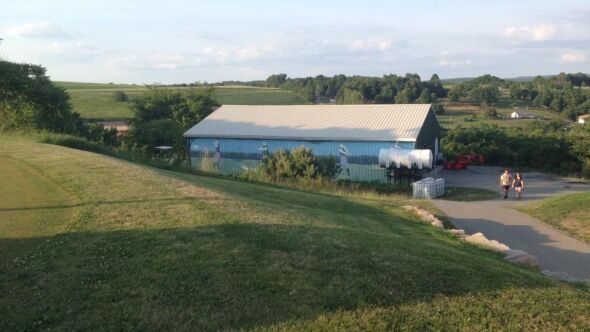 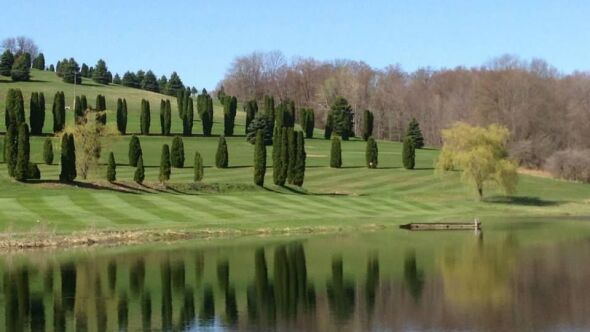 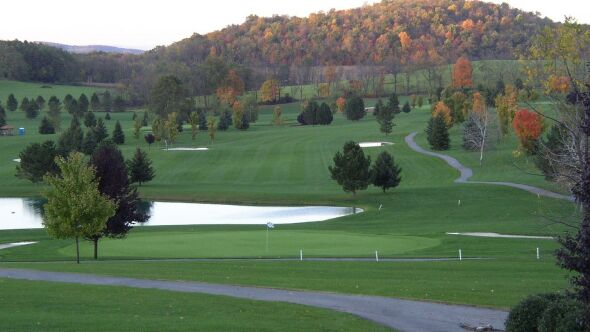 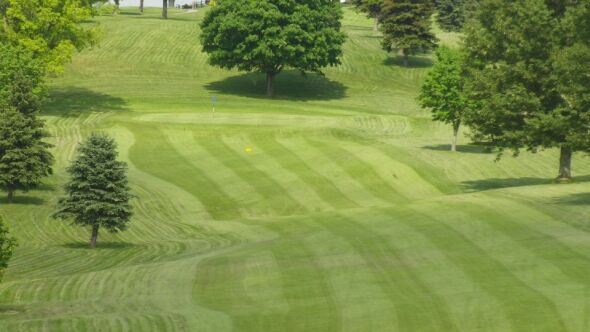 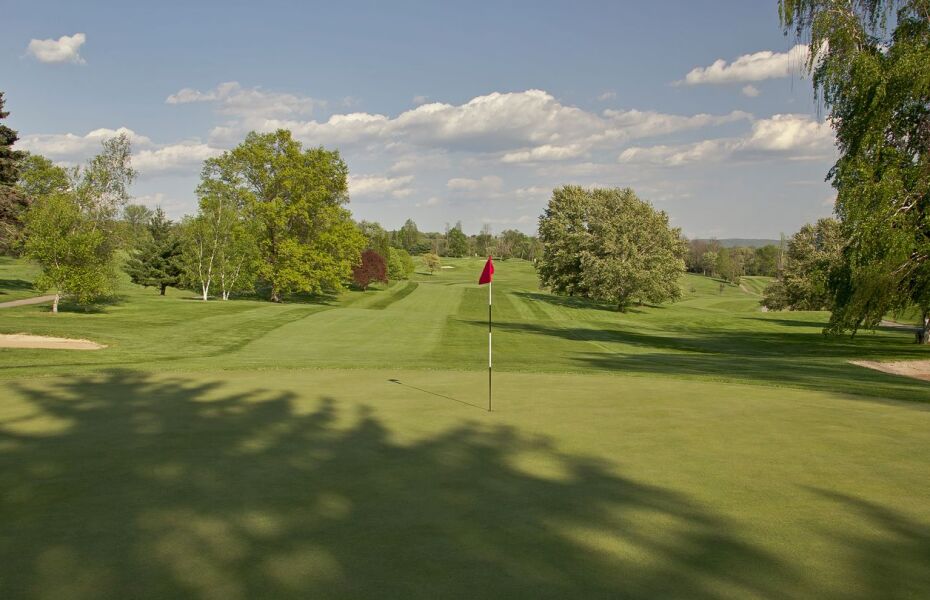 A view of the 5th hole at Park Hills Country Club 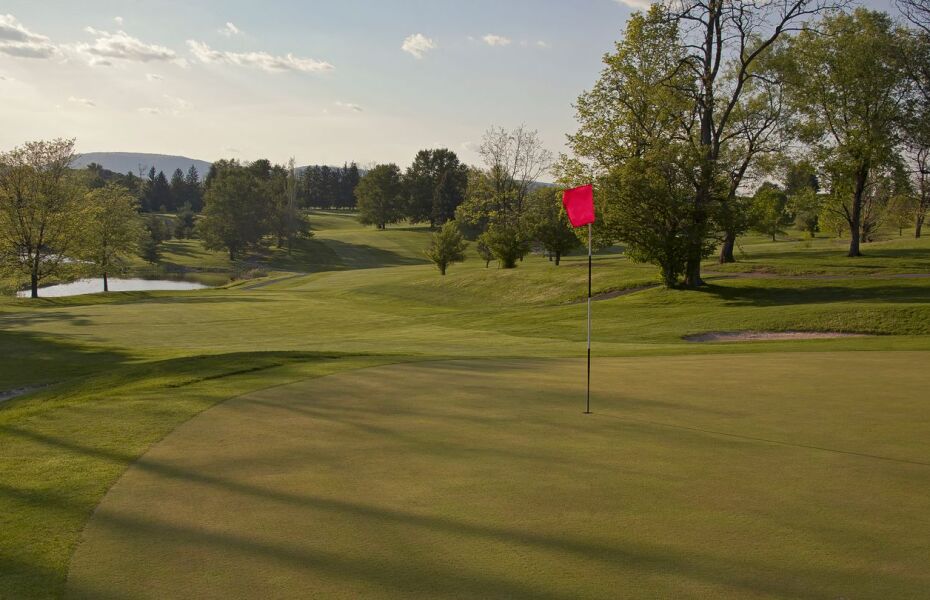