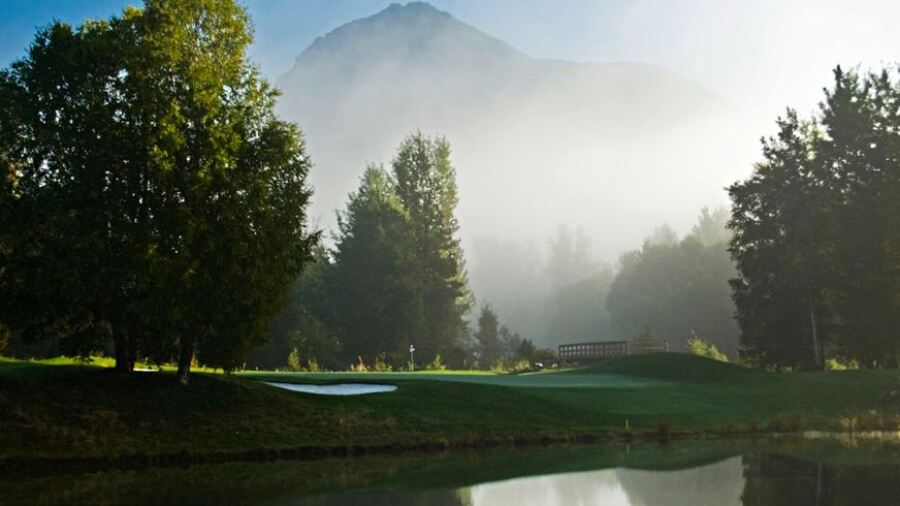 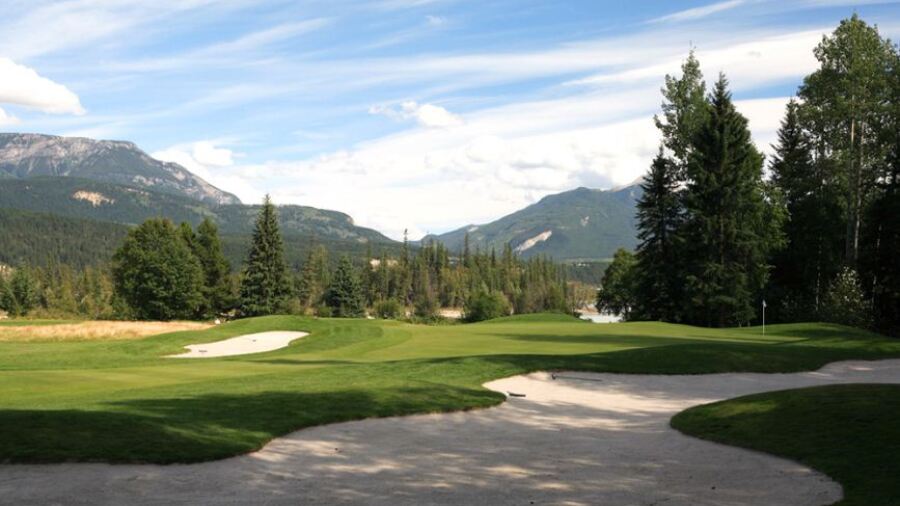 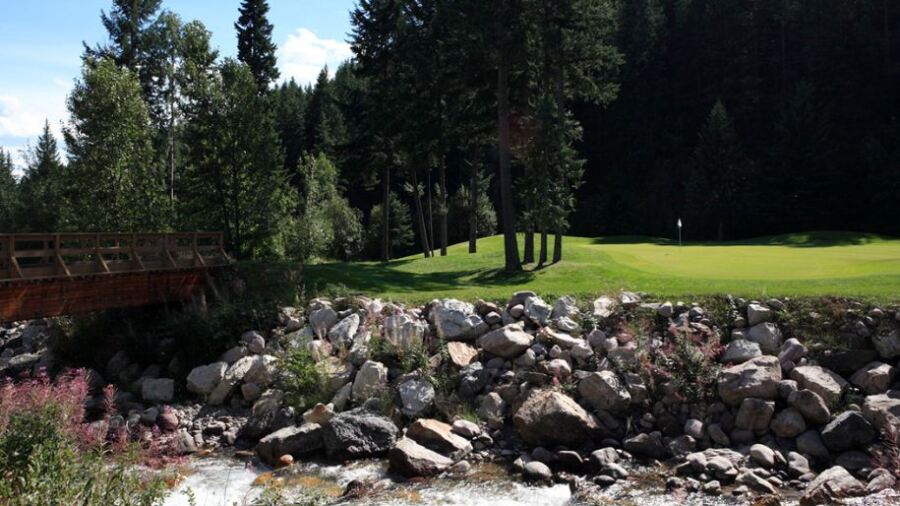 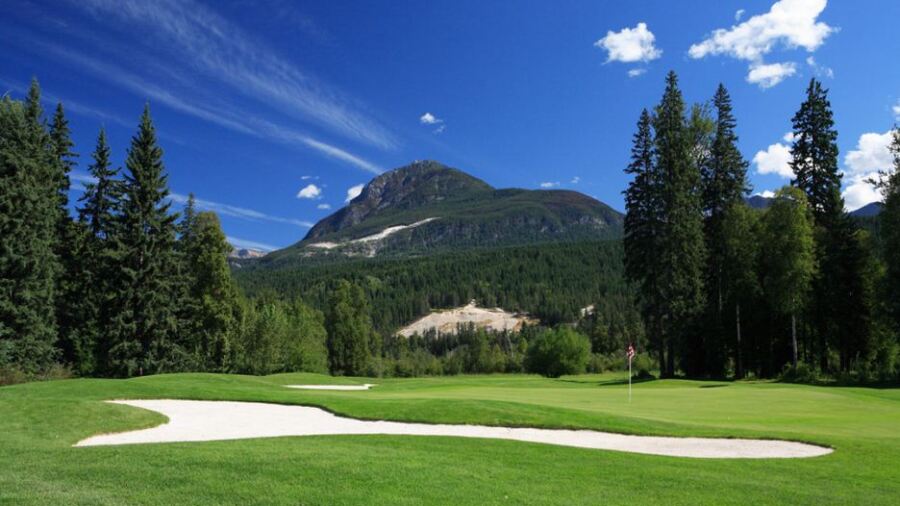 3 of 9
Golden Golf Club - 7th hole
Don't get too distracted by Golden Golf Club's mountain vistas -- the course has teeth, too. Courtesy of Golden G.C. 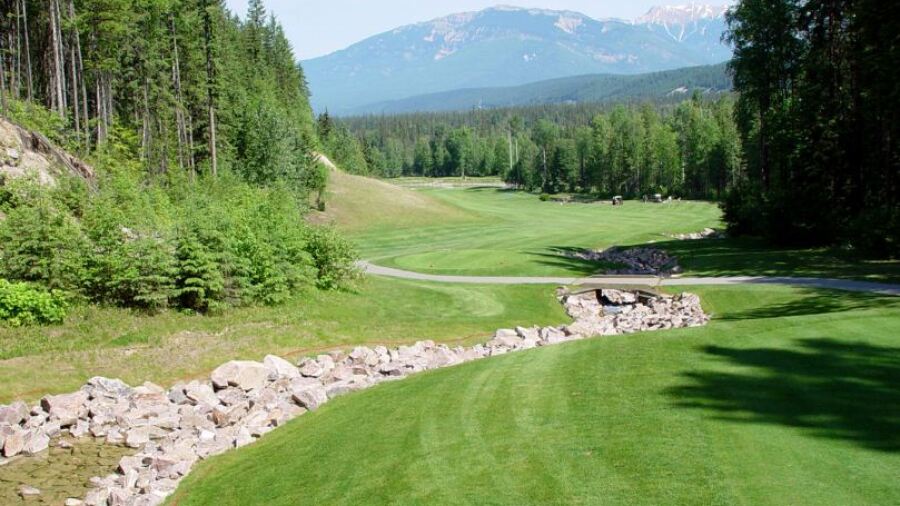 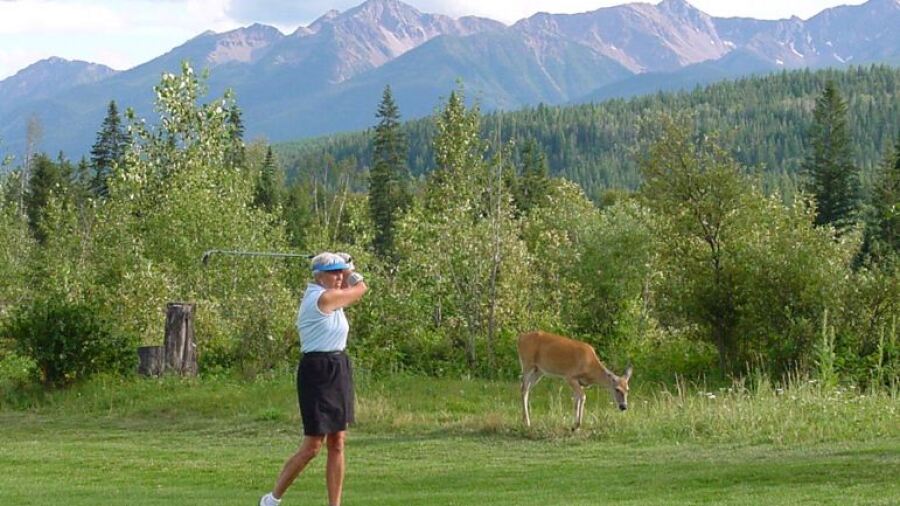 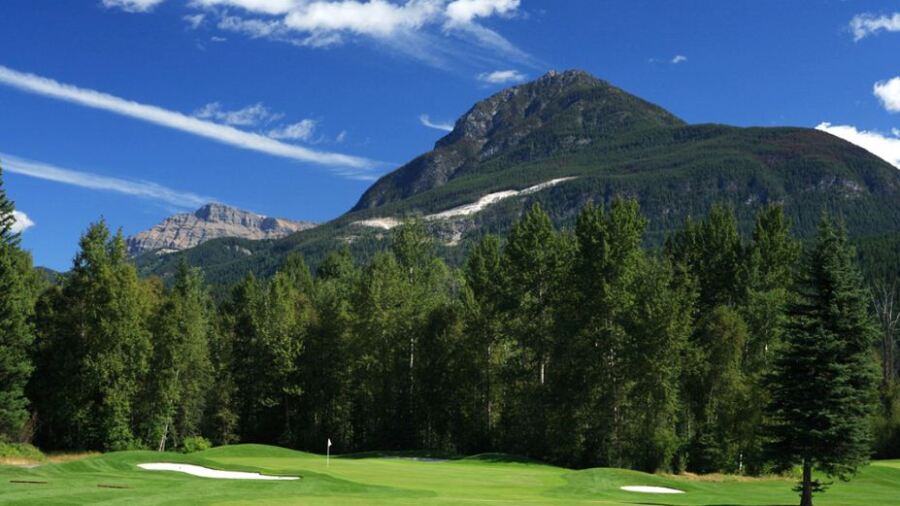 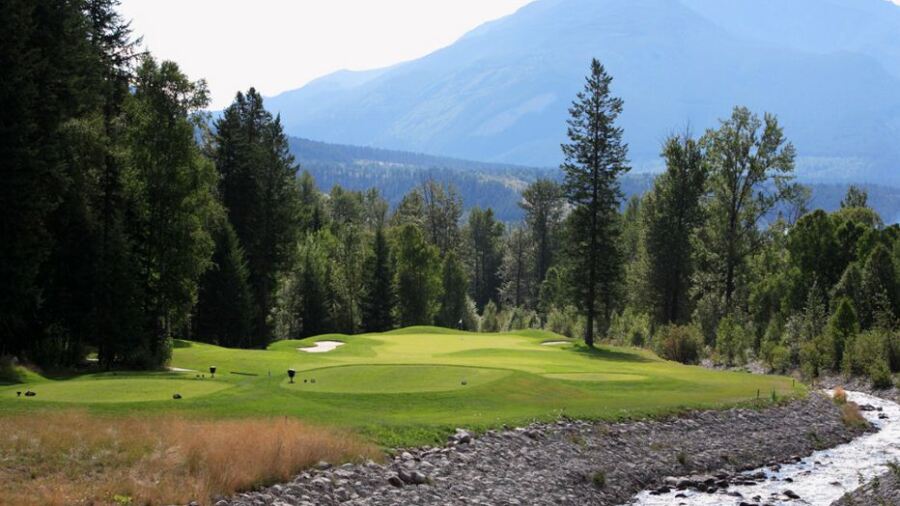 7 of 9
Golden G.C. - hole 16
Golden G.C.'s 16th hole runs alongside a creek and is one of only a handful of holes not framed by trees on both sides of the fairway. Courtesy of Golden G.C. 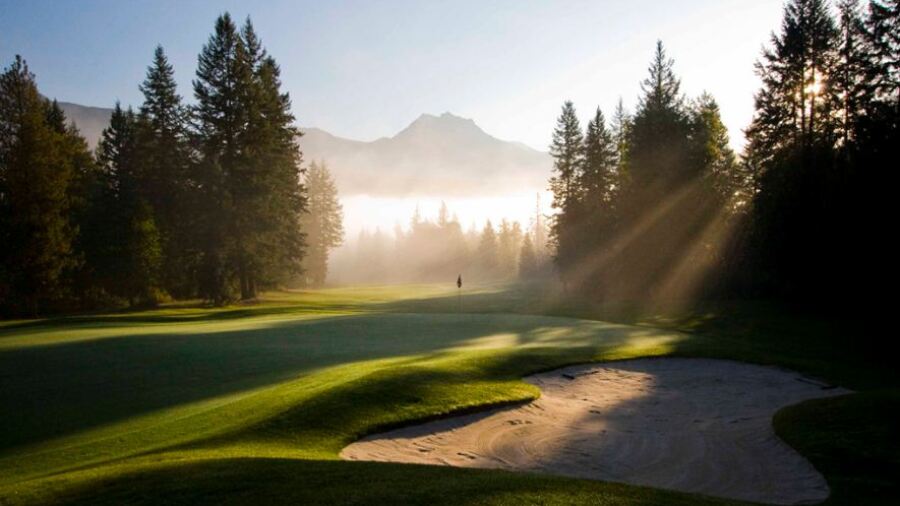 GOLDEN, British Columbia, Canada -- Golden Golf Club is tucked away in the Columbia Valley, nestled between the Rockies on one side and the Purcell Mountains on the other.

Surrounded by untouched wilderness, the golf course's rugged terrain was also carefully preserved. Mature trees line nearly every hole and water also has a prominent presence throughout the course. Meandering creeks and ponds accent the landscape and there are also several holes routed along the banks of the Columbia River.

The first nine was built in 1986 by Bill Newis and was later joined by a second nine holes designed by Les Furber. Despite being designed at different times and by different architects, the two nines blend seamlessly to provide a player-friendly golf course that is challenging but fair.

The par-4 11th hole is the course's signature, known both for its views and its degree of difficulty. It overlooks the rushing waters of Holt Creek and has a breathtaking mountain backdrop. Don't let the views distract too much though, since this tricky hole features a tree-lined fairway and a green that slopes from back to front. 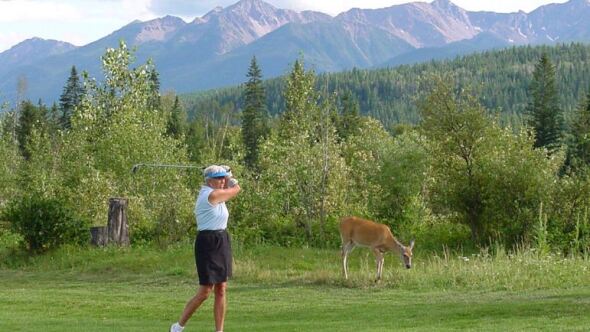 Articles
3 Min Read
The wildlife plays through at scenic Golden Golf Club in British Columbia
With towering pine trees separating most of the holes at Golden Golf Club, you'll seldom see another group. That doesn't necessarily mean you'll have the course all to yourself. With moose, elk, eagles and bears, wildlife usually comes into play. But while you might be easily distracted by the mountain vistas or your four-legged followers, the golf course has teeth, too.

By Wes Gilbertson
Nearby 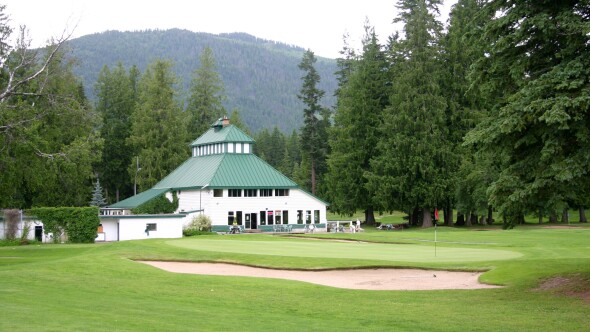 Articles
2 Min Read
From horsin' around to playing a round, Revelstoke Golf Club is steeped in history
Long before anybody was haggling over strokes on the tee, Revelstoke Golf Club was an equestrian track. Revelstoke, the only 18-hole course for about an hour in any direction, isn't necessarily a course you would go out of your way to play, but it's a great spot to stop en route to wherever it is you're going, Wes Gilbertson writes. 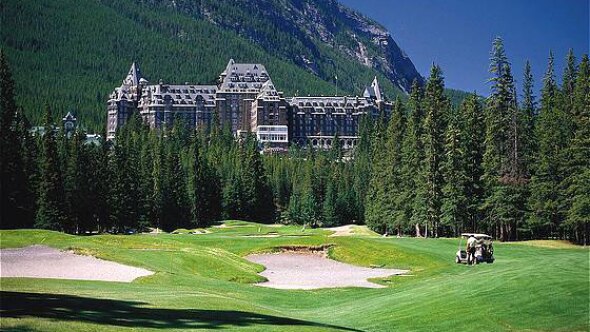 Galleries
11 Images
Photo gallery: Fairmont Banff Springs in the Canadian Rockies
Fairmont Banff Springs is one of two classic, Stanley Thompson-designed courses in Alberta's Canadian Rockies. Opened in 1928, the course is known around the world for one of the most exciting par 3s in golf, the "Devil's Cauldron" fourth, that plays from an elevated tee over water to a well protected green that sits right next to a jagged, rocky mountainside. 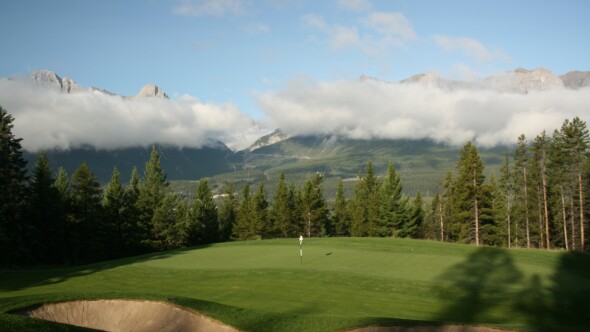 Galleries
12 Images
Photo gallery: Silvertip Golf Resort in Alberta's Canadian Rockies
Silvertip Golf Resort, located in Alberta's Canadian Rockies, is one of the area's newest golf courses, and it's certainly the most dramatic. The course is set on a mountainside, which sets up more than 600 feet of elevation change from the course's highest to lowest point. 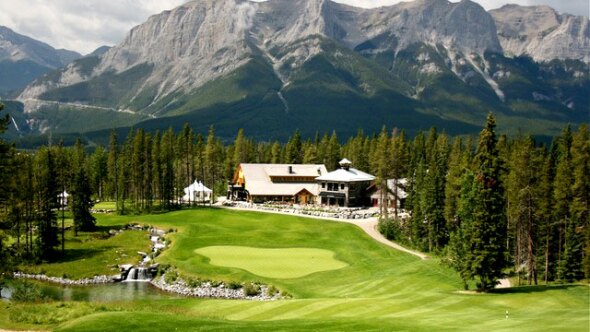 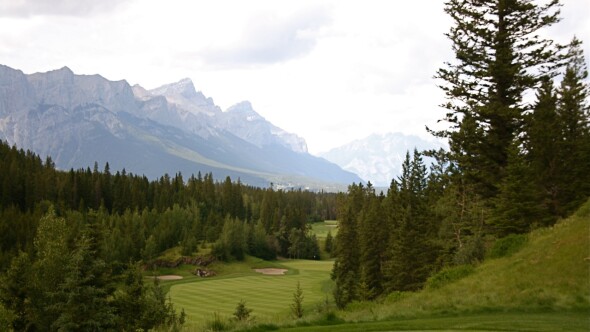 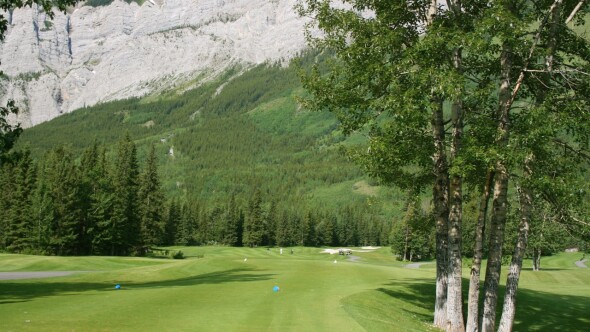 Galleries
10 Images
Photo gallery: Kananaskis Country Golf's Mt. Kidd course
Kananaskis Country Golf Course in Alberta's Canadian Rockies actually consists of two 18-hole golf courses, the Mt. Kidd and Mt. Lorette, named for the mountains they sit beneath. Both golf courses were built by Robert Trent Jones Sr., who actually had a hand in finding the location. Originally planned for the other side of the valley, Jones saw the Kananaskis River and mountain backdrops and persuaded the Canadian government to let them build on the present side.

By Brandon Tucker
Read More
Load More
Now Reading
Golden Golf Club is surrounded by British Columbia's untouched wilderness
New Cookie Policy
WE AND OUR PARTNERS USE COOKIES ON THIS SITE TO IMPROVE OUR SERVICE, PERFORM ANALYTICS, PERSONALIZE ADVERTISING, MEASURE ADVERTISING PERFORMANCE, AND REMEMBER WEBSITE PREFERENCES. BY USING THE SITE, YOU CONSENT TO THESE COOKIES. FOR MORE INFORMATION ON COOKIES INCLUDING HOW TO MANAGE YOUR CONSENT VISIT OUR COOKIE POLICY.
CONTINUE
Search Near Me