The career trajectory of Gil Hanse mirrors closely that of one of his early mentors, Tom Doak. Like Doak, Hanse received a Masters of landscape architecture from Cornell University (1989). Also like Doak, Hanse won the prestigious William Frederick Dreer Award, which allowed him to spend a year in Great Britain studying golf courses. He joined the firm of Hawtree and Son, the oldest continuously practicing golf course architecture firm in the world. From there, he joined Doak's Renaissance Golf Design until 1993, when he founded Hanse Golf Course Design, Inc., taking his place with Doak, and Bill Coore and Ben Crenshaw as one of the most influential "minimalist" golf course architects of the late 20th and early 21st centuries, although he has resisted being pigeonholed into one style of design.

Aside from his contemporaries, Hanse lists A.W. Tillinghast and Alister MacKenzie as major influences. Hanse's knowledge of golf history, and sensitivity to classic course architecture, helped him land the job of designing the Craighead Links at the Crail Golfing Society in Scotland -- the seventh oldest golf club in the world. At that time, Hanse was only the third U.S. golf course architect to build a course in Scotland.

It is Hanse's most recent projects, however, which promise to cement his place in the international annals of golf history. Hanse and his design partner, Jim Wagner, were tapped to design, among others, the third course at Streamsong in central Florida (Streamsong Black), Trump International Golf Club at Akoya in Dubai and -- biggest of all -- the Rio 2016 Olympic Golf Course, venue of the first Olympic golf to be played since 1904.

Hanse's designs place value on imagination over raw power, on creativity over penalty. He has been quoted as saying, "The question shouldn't be, 'Will I find my ball?' but rather 'How should I best advance it?'" Toward this ultimate goal, Hanse uses every advantage that the natural landscape offers him, but if nature falls short, he's not averse to moving dirt to create more options, rather than fewer, for the golfer. Choosing the best option for one's own game, then, and executing, represent the major challenges when playing a Gil Hanse design. 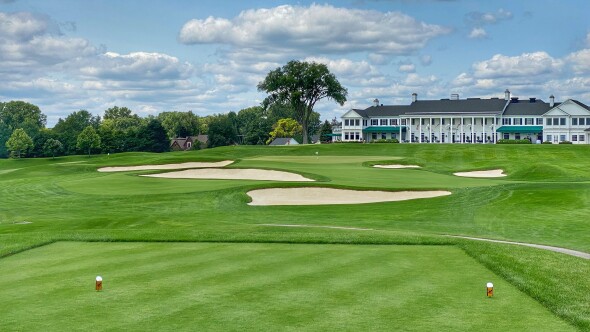 Recent Articles
Equipment Report: The 2021 Holiday edition has eyes on these Black Friday golf deals
How to book tee times at The Wynn Golf Club, home of the Brooks-Bryson Match
2021 Holiday Golfer's Gift Guide
It takes a village to build – and celebrate – a great golf course
Playing hooky is a Cool Golf Thing
The best portable launch monitors for golf
Now Reading
Search Near Me