TALLAHASSEE, Fla. — Jack Nicklaus is passing the torch at his golf design company to his son Jack II. The father-son duo have worked together for decades, but with the launch of their new Legacy Design, it is Jack II who leads while his dad advises.

Their first such course in North America is the new Seminole Legacy Golf Club at Florida State University in Tallahassee, Florida. The course opened on March 7, 2020 with large crowds of members and FSU golf supporters on hand to see the Golden Bear and his design heir unveil their latest creation.

"It's passing the baton, from me to my son," said Jack Nicklaus. "To put what knowledge we have learned over time on a piece of property."

The Nicklaus Design company was chosen for the project in part for their close ties to Florida State. There have been a half-dozen members of the Nicklaus family who are graduates of the school including three children of Jack II. Speaking to their family’s love of FSU, Jack added that, "We’ve had a lot of people through here and have a pretty good legacy at Florida State to start with so we might as well put it on the golf course, too."

Located within FSU’s southwest campus, the property, formerly the Don Veller Seminole Golf Course, has been the home to the Seminole golf teams and countless rounds from students, faculty, and community members for nearly sixty years. The original university course was designed by Bill Amick in 1962 and underwent a substantial renovation in 2004 at the hands of course architect Robert Walker. The Nicklaus Design team however treated the project as a complete redesign. Jack described their approach by saying "We treated it as a raw piece of property and just did a new golf course on it."

The start and finish of the golf course uses corridors from the original design, but the rest of the property is completely unrecognizable from what previously existed. The new routing showcases the terrain in an interesting fashion with holes that traverse a large dome-like land feature that dominates the property. A combination of tall pine trees and stately live oaks offer golfers a taste of the North Florida environment with holes that fit naturally among the hills there. Other than the addition of a man-made pond created for both irrigation needs and to guard a drivable par 4, the course blends seamlessly into the lay of the land.

The Legacy course was tailor made to provide the Seminole golf teams a new home for a program that has a long tradition of producing top players. Currently the men are led by Walker Cup standout Jon Pak and the women by Amanda Doherty who will play in the upcoming Augusta National Women’s Amateur for the second straight year later this spring. Trey Jones is the head men’s coach and Director of Golf at FSU who led the push to build a new golf course.

When asked about the vision for the project, Jack spoke to Jones’ understanding of the modern game. "Trey wanted a modern golf course," said Nicklaus Sr. "He said every golf course they play the players turn it into a miniature golf course so we’ve got 7,800 yards in it, but you still make it so the average golfer can play it."

Jones spoke to the challenge of designing a course for the best collegiate players in the game as well as recreational players. "The flexibility is amazing out here - it can play completely differently from one day to the next because of the size of the greens and the range of tee options." Coach Jones believes the greens are what make the course both difficult for their athletes but also manageable for member play. "I love the green complexes and the surrounding areas - they are negative edge greens which means they won't capture your ball. It will run all the way through if you miss but you can chip it, putt it, bump a hybrid or any other club you choose. You won't get in a position you can’t get out of." 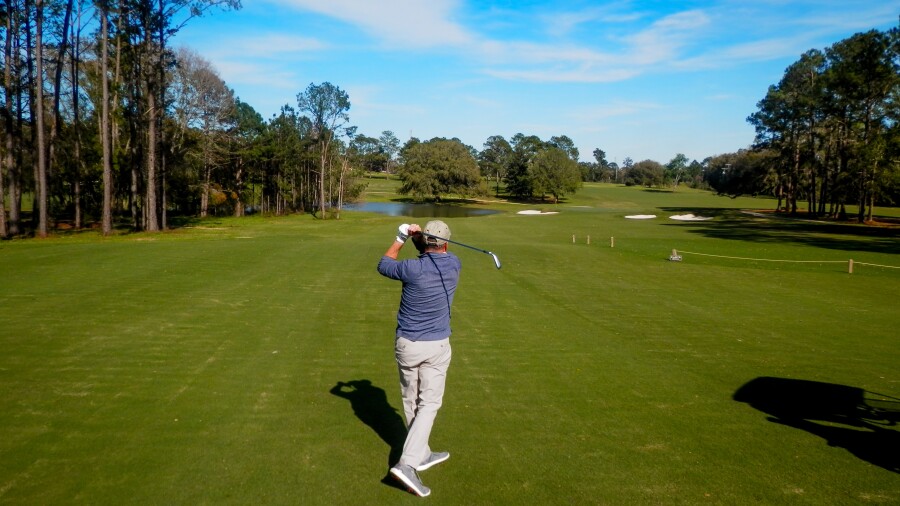 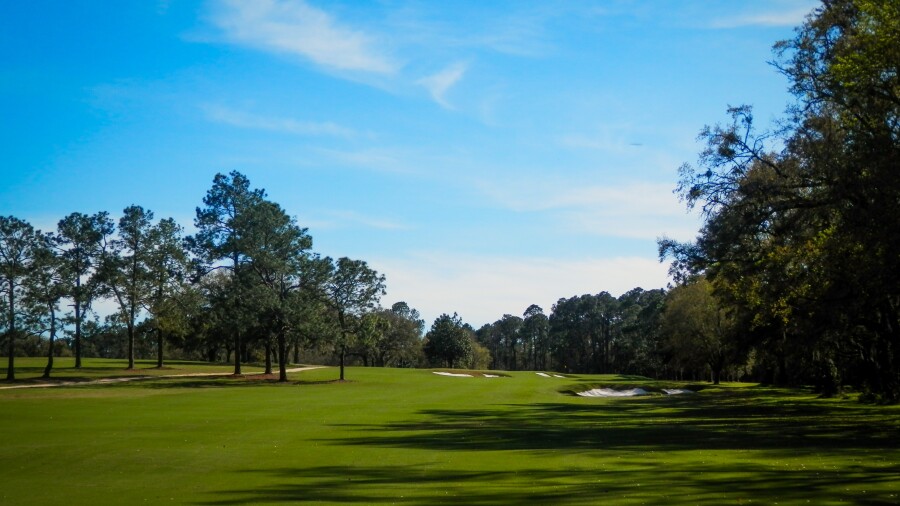 View from the fairway of the 14th hole at Seminole Legacy. Jay Revell/Golf Advisor 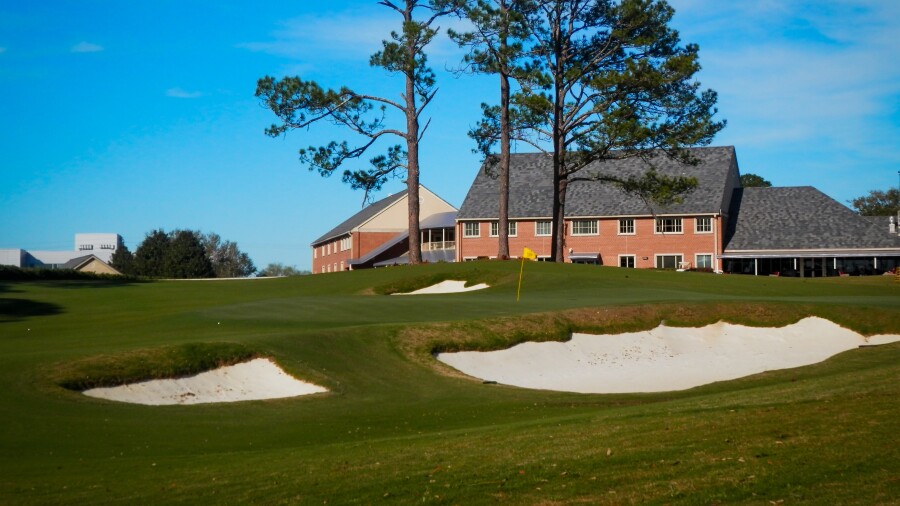 View of the 18th green and clubhouse at Seminole Legacy. Jay Revell/Golf Advisor 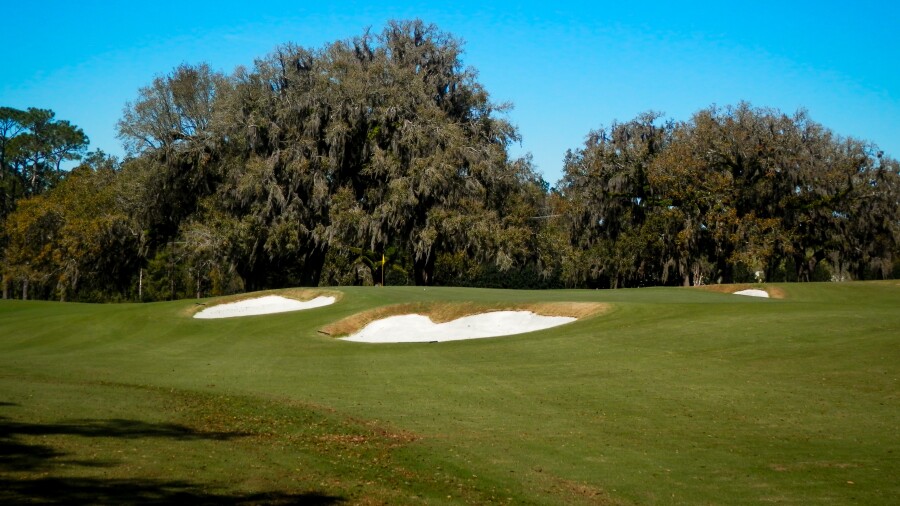 The perspective of the modern elite player was not lost on the Nicklaus design team. Working with Coach Jones and Women’s Coach Amy Bond, Jack II wanted to build a course that would aid in the development needs of the next generation of Seminole players.

"It’s amazing to have this at Florida State University," said Pak. "It’s a tough challenge and it will make the university better and the golf team better.”

With players hitting the ball farther and straighter than ever, Nicklaus Design focused on building a set of greens that could put a high demand on world-class ball strikers. Coach Jones is particularly proud of what that can offer all the players in the program, "The golf course is going to help them train and learn how to hit every shot possible.” Pak added, "It is definitely the greens that stand out. That’s where Jack tried to make it the toughest. There are a lot of falloffs and the greens are very undulated. That’s the challenge of the golf course."

The new Seminole Legacy course also brings a strong visual appeal to players that wasn’t as prevalent in the original routing. Jack, the Nicklaus family patriarch, expanded on this saying, "It’s a good test of golf. One of the two of the things I like to do with a golf course is make it aesthetically pleasing - I think a lot of people want to go and play some place that is pretty, but they also like to have someplace that has good golf shots in it. If you have good golf shots and it’s aesthetically pleasing that combination usually makes for a good golf course. We now have that here." Golf course superintendent Matt Murphy agrees. Murphy spoke to the difference from the old course to the new, saying, "They’ve taken a property that has real good bones and gave it a classic look but with a modern feel. I think they’ve done well to make it look like it's been here for a long while."

Jack Nicklaus expanded on how his son applied their family design philosophy to the new Seminole Legacy course saying, "I think the eye is really what makes a golf course. You look at it and say ‘man that’s pretty, boy that’s inviting, that’s what I’d like to go play’. That’s what we tried to do here."

Added Jack II, "Seminole Legacy sounds like family to me. It’s a strong golf course - but for the average folks who will play it day in and out it’s very playable. That strategy is present from the time you tee off to the time you finish."

The Seminole Legacy Golf Club is operated by ClubCorp and is currently offering memberships. There is no daily-fee play, but special, affordable membership levels are available for students, alumni, faculty, and other employees of the university. The course will host yearly tournaments for both the men’s and women’s golf teams as well as regular outings and events for members. There are also plans for hosting a variety of championships and other important competitions including the 2021 NCAA Men’s Golf Regional and a future AJGA event.

It was clear from the excitement surrounding the opening day that the $8 million renovation has exceeded the expectations of all involved. The popular belief among those who attended the opening is that the course will attract a high level of attention and success for the FSU golf program for years to come while giving members and those affiliated with the school a much more appealing place to play in Tallahassee.

Jay Revell
Jay Revell is a Florida Local Golf Advisor and member at Capital City Country Club in Tallahassee. Follow him on Instagram @jayrevellwrites or Twitter @jayrevell
0 Comments
More from the author

Kira K. Dixon
Lifestyle Correspondent
Now Reading
A new era for Nicklaus Design at Florida State University's new Seminole Legacy Golf Club
New Cookie Policy
WE AND OUR PARTNERS USE COOKIES ON THIS SITE TO IMPROVE OUR SERVICE, PERFORM ANALYTICS, PERSONALIZE ADVERTISING, MEASURE ADVERTISING PERFORMANCE, AND REMEMBER WEBSITE PREFERENCES. BY USING THE SITE, YOU CONSENT TO THESE COOKIES. FOR MORE INFORMATION ON COOKIES INCLUDING HOW TO MANAGE YOUR CONSENT VISIT OUR COOKIE POLICY.
CONTINUE
Search Near Me