I've played here maybe 30 times, always in well above average condition. The course has very few blah holes, maybe two I can think of. Every other hole grabs your attention. Par 3's are mix of long and short. Most of them are very tough. IMO the par 3's is where you make your score. Two of the par 5's are reachable, the other two generally speaking are not unless you get tail wind and can hit it a mile. Some great short par 4's on the course. Green complexes are mostly challenging, short game is a premium with a lot of undulation around the greens if you miss. Beautiful course, great clubhouse with good food and better views. Staff is always friendly.

I played this course in 30+ mph winds and greens that had to be rolling at a 12-13 on the stimpmeter. It was absolutely brutal and I still had fun. There are few courses that I would say that about. This course, in my mind, is what North Dakotans should hold up as an example of what level of golf we provide in our state. The greens were like putting on linoleum and had it been a calmer day it wouldn't have been an issue. But the setup of this course is so unique because the whole thing seems to drop into a valley save a few holes along the upper edges. I recommend playing this course if you're anywhere near Bismarck.

My first experience at Hawktree was somewhat bittersweet. Based on its reputation, my expectations were understandably very high. Beginning with the positives, and they are numerous, the course itself is flawless, with perhaps the exception of the tee box markers, which are somewhat vague (black rocks look similar to gray ones making us have to reverse a few times). The fairways are quite generous, for the most part, especially off the tee. Even the blind shots are quite manageable once you pick the right line and execute it. The GPS was very helpful, and unless you are a regular, mandatory since there are plenty of hazards to contend with throughout the course. Most tee shots are grip and rip, but good, and often great, iron play is needed to get close to the hole. That is the variable that will affect scoring the most at Hawktree, I think. The greens are terrific. They are very true, but undulated enough to provide plenty of surprises. I expected them to be quicker, but this may have been due to our late afternoon tee time. As for the bunkers, the visual takes you aback, but honestly, they play similar to normal ones. As sick as it sounds, I am glad I found one at Hawktree because I did not find one at all at Old Works, the Nicklaus course in Montana that also features black slag bunkers. I am thrilled that I finally got to hit out of one. With respect to the course itself, it is a real jewel. Now, as for my criticisms of Hawktree, they are few, but relevant. I already mentioned the markings on the tee boxes. After ten years of operation, more permanent, and more clearly colored placards should be installed by now. I realize this is North Dakota, and west of Fargo, you can probably count the number of premium courses in this state on one hand. Supply certainly doesn't meet demand. However, since the green fees are uniform throughout the day, and from what I observed, play is steady, I do not approve of sending out fivesomes. There were plenty of them in front of us. So, this is obviously normal procedure. Goat ranches send out fivesomes, not arguably the finest course in the state. If there were a twilight rate, this policy could be argued effectively since sundowners justifiably take their chances with the cheaper rate. Hawktree certainly has the right to exploit its monopoly by structuring its fees whatever way it chooses, and it can be said that its rates are still a bargain based on the lack of competition and the high quality of the course itself. However, the slow play at any price sours the total experience, and in this case, costs Hawktree a star.

What do expect from Jim Engh??

This is the 5th course from Jim Engh that I've played between Colorado and ND. Although it is not my favorite of his it still delivers an incredible golf experience. What this course lacks is only the breathtaking panoramic views that you get in the Newcastle and Grand Junction, Co. Engh designs.
The thing with Hawktree is you feel like you are in your own world. I was one of the first people off that morning so it seemed like I was the last person on earth.
I can't say enough about the condition of the course, from tee to green is absolutely perfection. The staff were all very pleasant and the GPS in the carts was very handy with all of the blind tee shots that you will come across. The course spreads out nicely and feels very long. The greens were very fast for 7 am I thought. The rolling hills off the fairways create interesting, uneven stances on nearly every hole. Black slag bunkers were a nice touch as well.
Well worth the money and advertisement.

Bring your "A" Game! Just because it is located in North Dakota doesn't mean there aren't great courses to enjoy. The views are great, the course is always in wonderful condition, and the BLACK sand traps are great and easy to locate your ball should you be unfortunate enough to land in one, although they are also well manicured just like the rest of the course. The course doesn't favor either a fade or a draw player, just be ready to shape your shots and to not always go for the pin placements of the day as they may not leave any room for error. North Dakota native Jim Engh, the designer, worked with what he had for a landscape very well, and those that play the course will certainly want to play it again after they get a feel for the course, thinking that they will cut a few strokes off now that they have seen the course. But don't get lazy because that's when the "Hawk" will sink its talons deep into your game plan and tear it to shreads without you even noticing it because of how much you are enjoying the course, the challenge, and what it's giving you. Enjoy it more than once; we play it every chance we get, and enjoy a relaxing meal in the beautiful clubhouse afterwards. The only negative is the short golf season we have here in ND so we could play the "Hawk" more frequently! 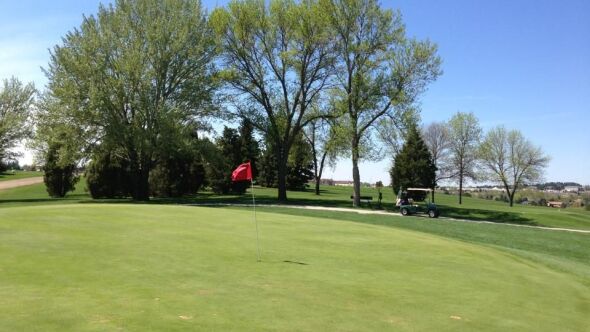 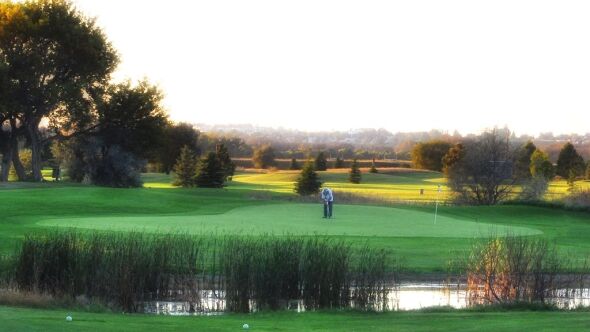 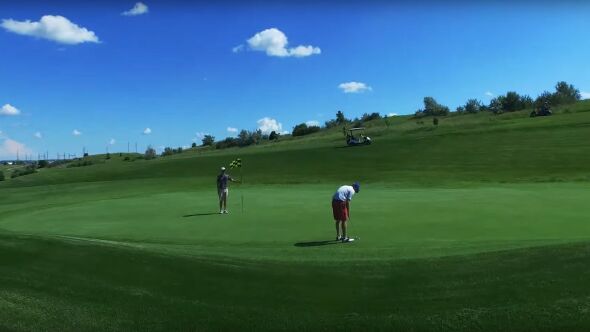 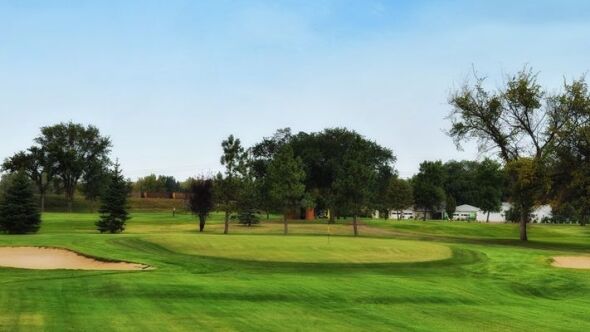 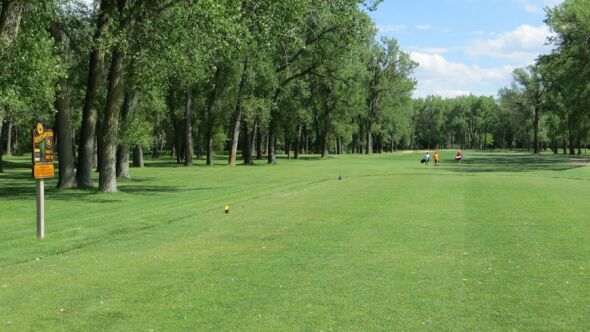 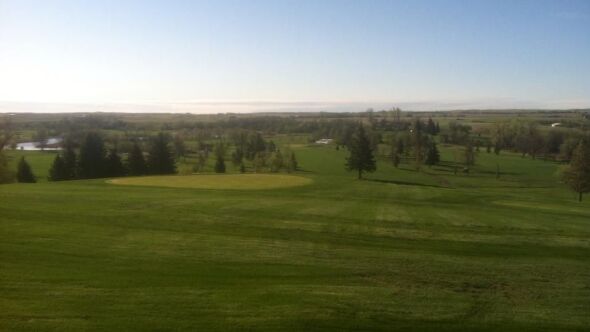 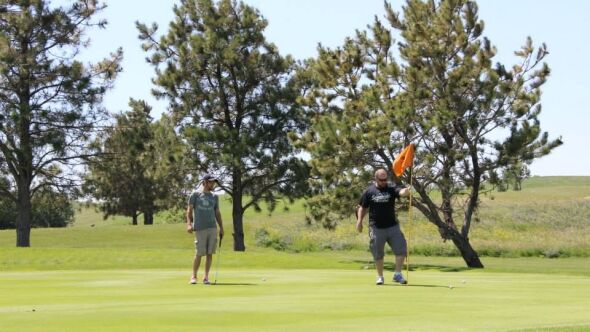 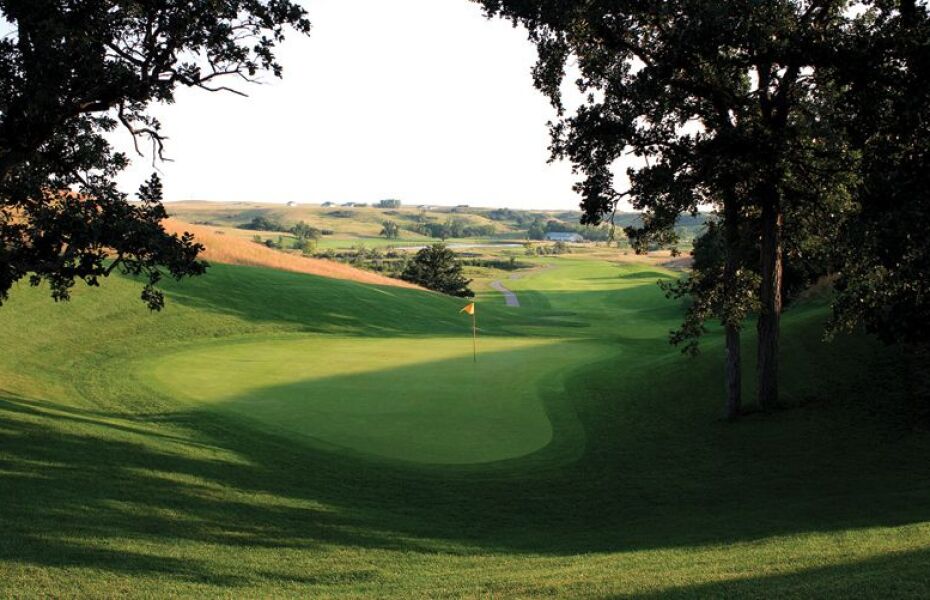 A view of a hole at Hawktree Golf Club Hawktree GC 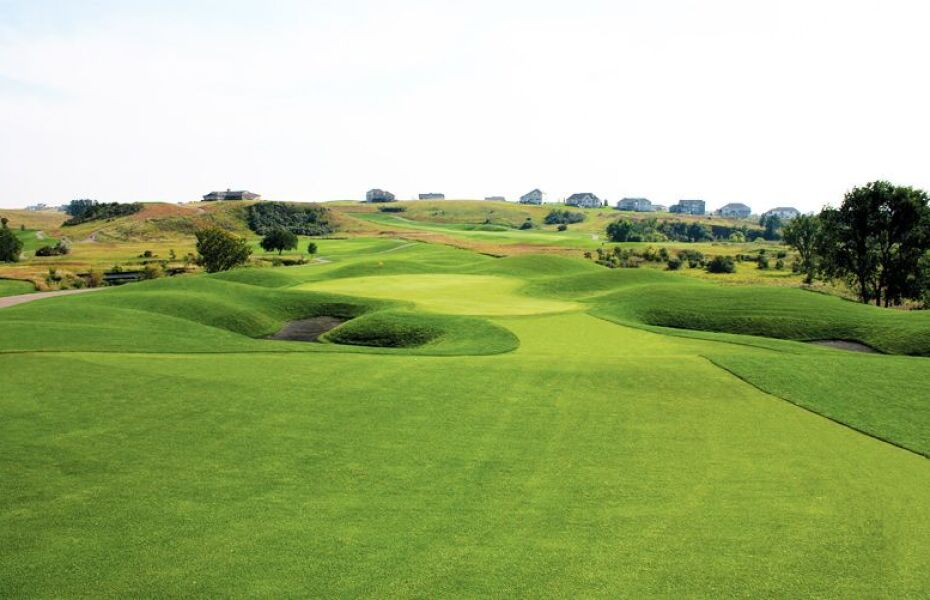 A view of a green at Hawktree Golf Club Hawktree GC 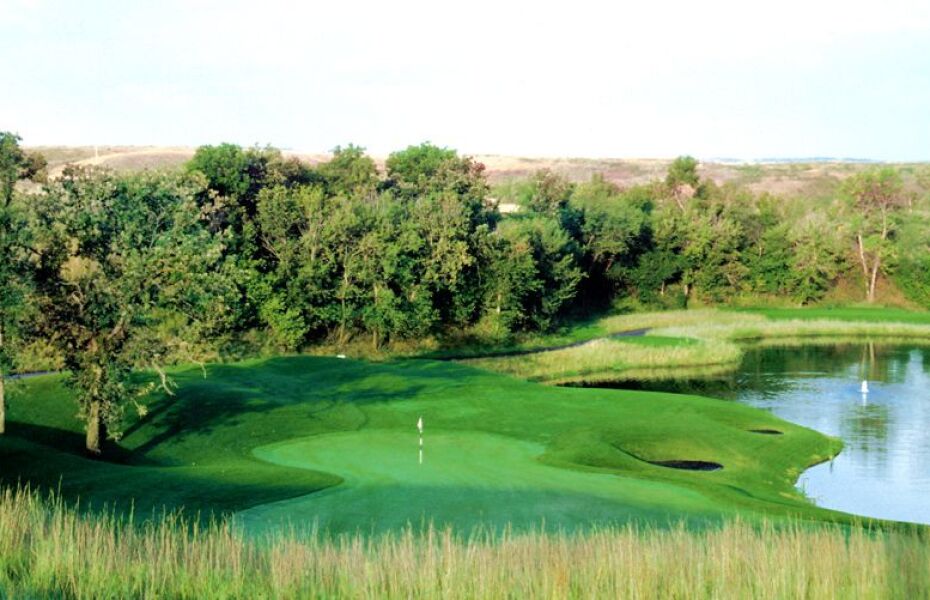