Management is not to be trusted

I was a member of Lulu for 2 years. The course is a classic Donald Ross design, with very fast greens. The playing conditions vary. When the course is in good shape, it is a treat to play. Unfortunately, all too conditions were not good, and there were large areas of dead grass in the fairways, and some damaged greens. At least one head groundskeeper was fired while I was there, but it may have been more.
The location of the driving range is idiotic. You have to cross 3 fairways between the range and the clubhouse, and with the holes so close together, you need look both ways at all times. There is a new practice putting/ chipping area, which is also within range of sliced shots off a couple of tees, so you need to keep alert if you don’t want to end up with golf ball lodged in your temple.
The main reason for my rating, however, is Jon Rusk, the general manager. You would not want to buy a used car from this man. If you are considering joining Lulu, you are STRONGLY ADVISED to read the fine print before you sign anything they give you. When I joined, I was asked to sign an innocuous-looking little slip which appeared to be nothing more than a receipt for my payment of the membership fee. But at the bottom, in a very small font, it gave the course the right to charge my credit card for an annual renewal of the membership unless I gave them notice 1 month before. On the other hand, the course DOES NOT HAVE TO GIVE THE MEMBER NOTICE OF THE RENEWAL. I found out about it when $4000 charge appeared on my card. I ended up having to pay a “transaction fee” of more than $200. Mr. Rusk wrote a sneering email advising me that I should have read the “contract” before I signed it. So, if you are determined to join Lulu, I will pass his advice on to you.

loved this course greens nice fast. I love the elevations change on the holes. Course makes you put the ball in play to score well. Bunkers could use a little more sand. But great course can't wait to go back

I like the layout and I have played it before and after the fire. First issue is that I don't know why so many single players were put out on the course that rushed up behind groups to play through. I makes the players in groups feel rushed and it frustrates the single players for various reasons. Even as a single player can play faster, a single has no standing on the golf course. I had looked into membership for a place to go and play a few holes if I didn't have time for 18 holes, but it seems to be just a public golf course with no control as in on course rangers. New clubhouse looks great and I am sure it will be nice inside as well. Course overall in good condition.

I had played the course a few times in May and June this year and it was terrific. Fabulous layout and course was in perfect condition. It really went downhill over the last couple months. The greens are slower and bumpy and several had bare spots. Tee boxes were beat up and several fairways had burned out areas. The driving area was mats only since there was no grass remaining and the chipping green loos like it has been abandoned.

Hopefully the course recovers over the fall and winter and returns to great condition next year. It is one of the better courses around when its in good condition.

How could anyone in their good conscience charge $70 for a round on this course? It was worth $30 at the most. Group of us drove almost 2 hours to play this course. I understand the fire almost 5 years ago, but that monstrosity of clubhouse being built will be underutilized and is too close to 2 holes- the 13th and the 18th. Missing a fairway on 13 left will result in a death if someone is eating lunch on the patio: the rough is only about 10 yds wide and runs right up to the patio. Missing the green left on 18 by 10 yards will result in a broken windshield. The driving range is all the way across the course and the putting green is in the middle of the course. The end result was carts darting back and forth in front of us all day. The tee boxes were chewed up, fairways had bare spots and sand all over the place. The greens were fast and true- too many bare spots. Some had long gouges like the mower bottomed out- all left un-repaired. There were a-lot of grounds crew out and about- they seemed more intent on turning the sprinklers on right before we played the hole than actively repairing damage on the course: we had one 5 minute rain delay because of sprinklers. Teed off at 10:50 and finished at 4:15= 5.5 hour round. Started on Hole 11, Little to No signage directing people where to go on the course. Staff in the clubhouse wasn't very friendly, almost rude and indifferent. They charged $13.50 for a Ham, Egg and Cheese sandwich on wheat toast with tater tots= It sucked. Why anyone would pay over $2K a year to belong here is beyond me. Stay away.

Were you stoned when you played? This is a trash course for $70.00

Used to be great

This classic Donald Ross design used to be one of the best public courses available in the area. Conditions have steadily gone downhill each of the past 2 years, culminating (for me) with yesterday’s conditions- which were especially terrible. Spotty sandy spots all over the course- including all over every green. Greens were bumpy and had lines cut throughout. It was a joke. Sorry to say that this course should be avoided at this point.

I played the course. The greens were punched bozo. Do you know anything about golf ?

I’ve played here in the past and the course conditions were much better. Very nice layout. It looks like they had some disease affecting the greens and fairways. The greens were recently verticut and top dressed. Not ideal conditions for summer golf. I hope they can get the conditions back to country club shape.

First time playing the course. Truly a hidden gem. Clubhouse somehow still under construction and no firm date for reopening which was a bummer because we would have eaten there. Checking in they immediately let us know that the greens had just been worked on. They gave us a voucher for another round for the inconvenience - awesome gesture. Fun layout with challenging shots and great aesthetics. Would absolutely recommend and play again. We didn’t have anyone behind us for two holes and weren’t waiting on anyone. Would be 5 stars if greens and clubhouse were in condition.

Played today. Course should not be open. Poor conditions and zero amenities. They should close for construction until course is playable.

I have played Lulu 5 times in the past 18 months. It is a private course that is currently allowing some daily fee tee times to non members while a new clubhouse is under construction after a fire. The layout is fun and fair. The $45 greens fee (3pm and later) is a great value. However, for the first time in my experience here, I was shocked by the burned out conditions of fairways and greens. Some fairways were 60-70% burned out. The rough and other areas seemed overly sloppy and unattended. I really love this course and hope that it can get back to its former glory, but it is not looking good right now.

Not worth the money!

Very disappointed! Had high expectations going in as I grew up in the area and never had a chance to play until now. Tee to green the conditions were not good. Tees and greens were burnt out! Fairways, while I wasn’t on many, didn’t look much better. Would love to tried out 1 or 2 but oh well. Do they not have water? Rough was tough but fair and definitely made the course tougher...unfortunately for me. No sand in some traps....I should know as I was in many. While it’s obvious they’re putting a lot of money into the new clubhouse, one can only hope they do the same for the course. Definitely not worth the money. And lastly....no amenities on the course! Really?!??

Played on a 90° day with no car girl and no halfway house. Course was in OK condition, but nothing special. I realize the clubhouse is under construction, but golfers really need refreshments while playing.

If first impressions are lasting then the starter the afternoon would scare me away, but I like the golf course. First we were going as a two some, then told to wait, then told to go, then told to let two walking members go ahead of us (mostly foursomes on the course), then told to go. We teed off then told to wait for a single and after he topped his tee shot they told the single to wait and put us with a twosome who was waiting and the single was told he could follow us. Once we got started play moved OK. Greens were good mostly but half seemed to not be totally healed from month old aeration. They call it a private club but it's a very loose interpretation allowing public play to individuals seven times a year but not sure how they track it. Overall course in good shape but some of the posted yardage is questionable. We frequently had short waits as the two walking members in front of us were going nowhere and eventually turned into a threesome of walkers with a player who came out of nowhere the last several holes. Can't wait till clubhouse opens and can play from the real first hole although it's Ok finishing an a good par five 10th hole. Hope that starter had a short career there. Club house guy looked out the door and he seemed confused by what was going on, or maybe he was directing it?

Play it before it goes fully private

Donald Ross was prolific, designing more than 400 golf courses in his storied career. And it’s natural to wonder whether his courses might start to blend a bit in one’s recollection.

LuLu, which sits toward the beginning of his career (1912), stands out strongly, thanks in part to a site with some interesting character (upon some golf had been built before Ross arrived), including a memorable wedge par 3 (#4) in an old quarry. Other quirky features include several “dolomite” or “chocolate drop” mounds behind greens and along fairways, as well as a few blind shots. At this point the club is semi-private, so if you find yourself in the area, spend the $78 (or less, depending on time of day and week) and play it. 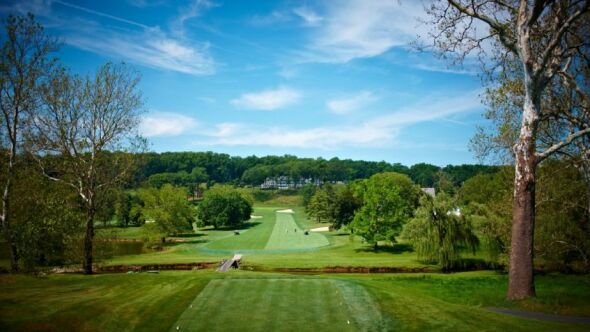 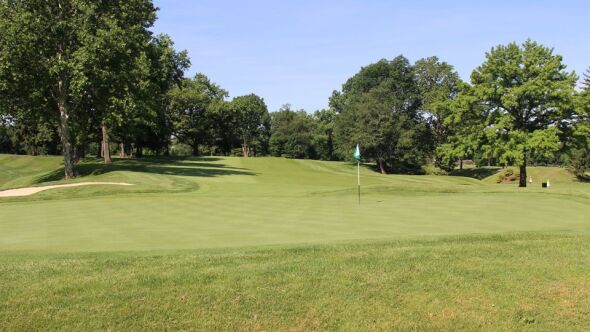 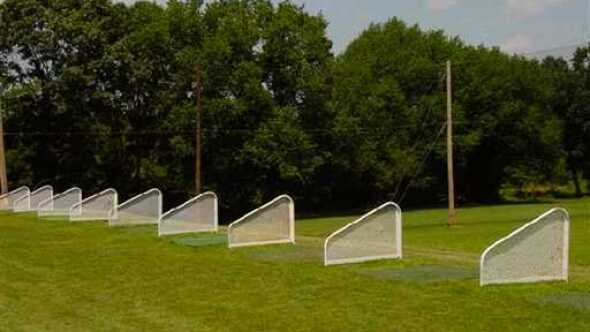 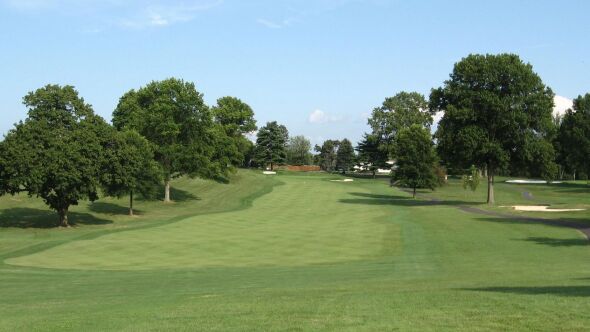 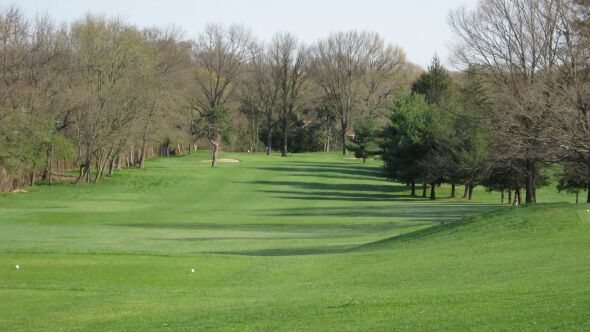 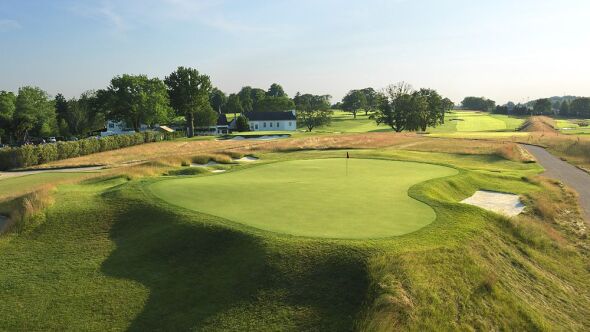 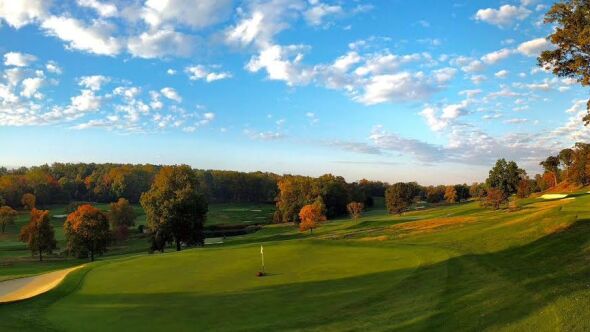 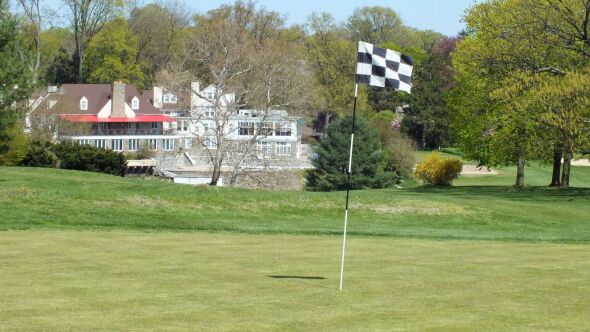 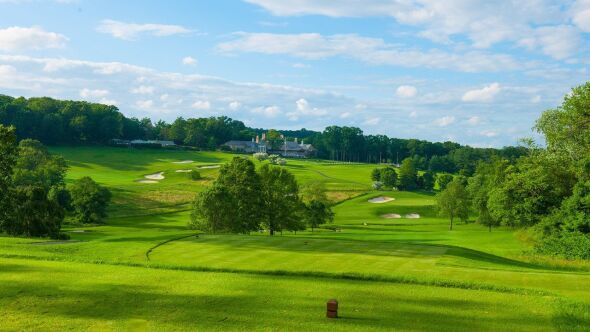 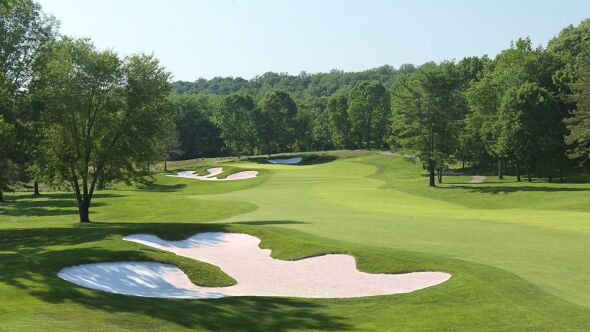 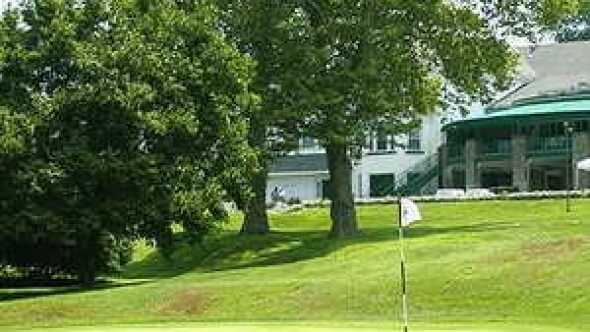 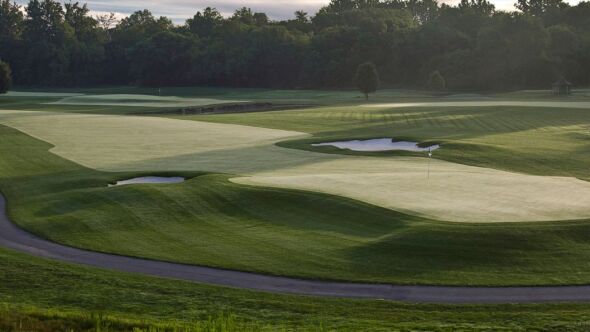 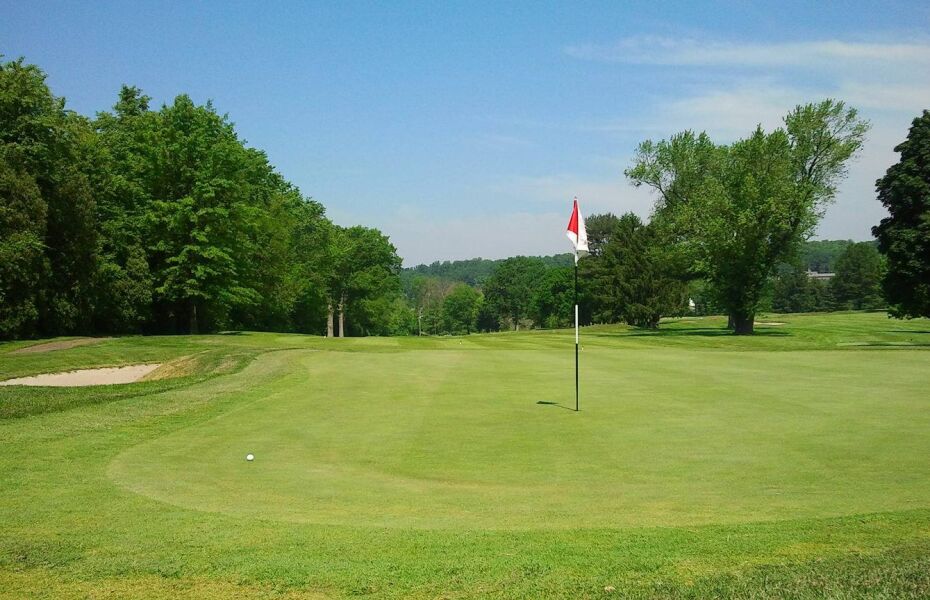 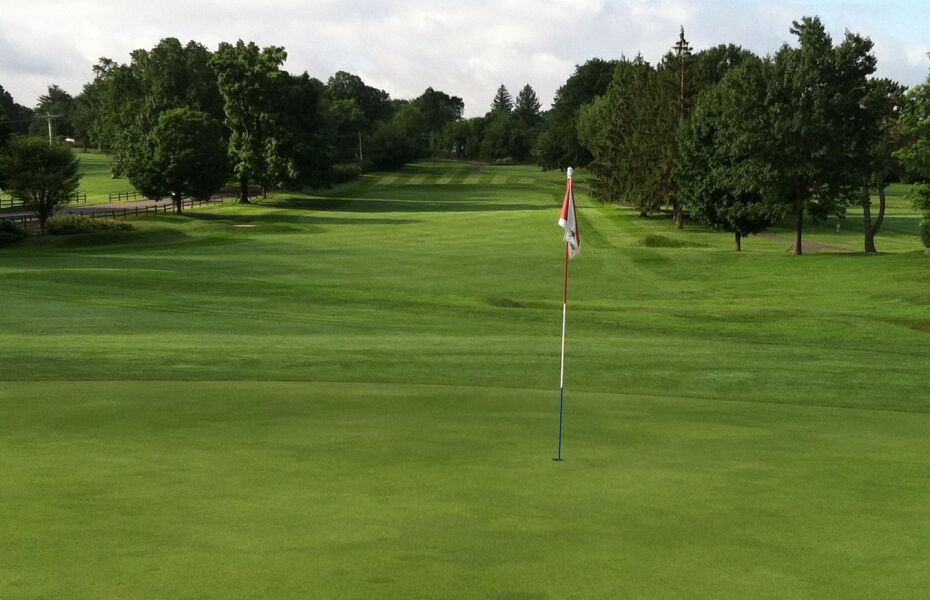 A view of a hole at LuLu Country Club LuLu CC 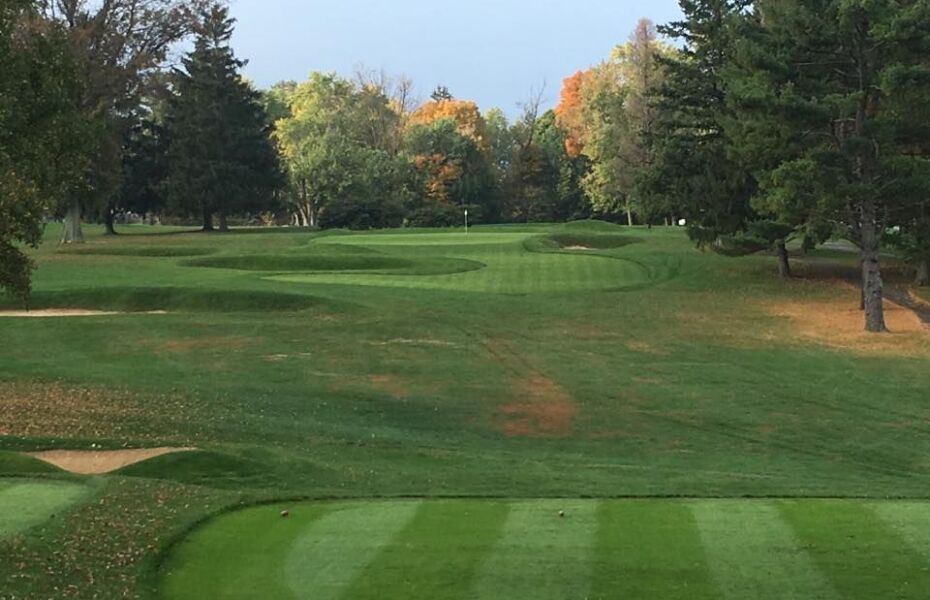 A view from a tee at LuLu Country Club. LuLu CC 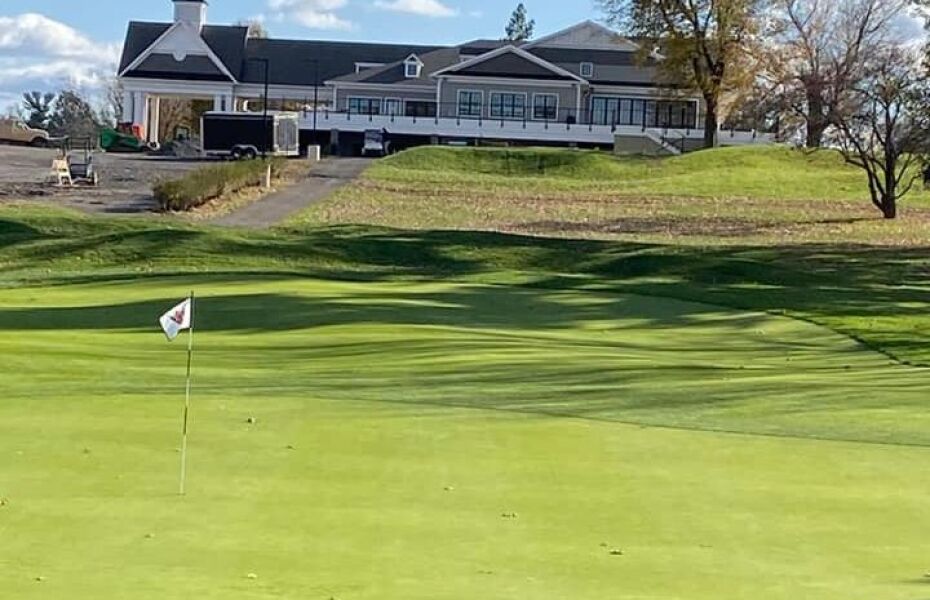 A view of green #12 at LuLu Country Club. LuLu CC 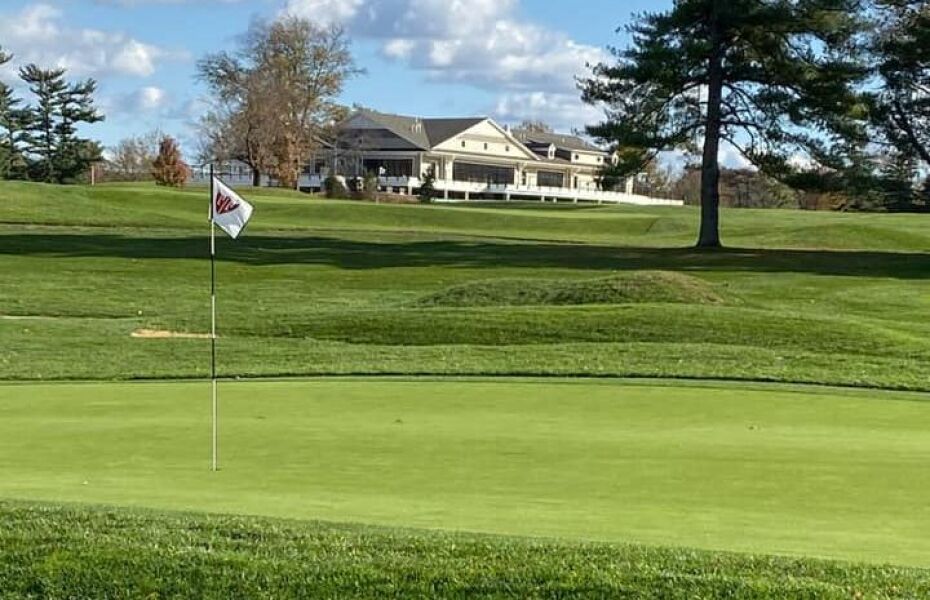