This Course's Location is:
Worth the Drive 6

An Iowa Must Play

I have to say we were amazed at how wonderful this course is. We are both experienced well traveled golfers and after reading the previous review for this course, we were shocked at the great condition the course was in. Tee boxes and greens were impeccable. Greens rolled really true, I would guess to about a 11 for speed. The views will take your breath away. No two holes are alike. We played in four hours and the course cuts through woods, valleys and fields so you never see another golfer. You must be sure to grab a scorecard/yardage book and have a range finder when you play, it will make it easier. Add this to you must play in courses in Iowa. The price is hard to beat too. We will be back!

I agree with the review from 2018. It is a tough Lay out if you never played it. A lot of blind shots. A Lot of Weeds in the bunkers. A Lot of Crab Grass. Not the Destination Course I thought it would be.

It was extremely slow until some groups let us play through.
You can tell the course has fallen upon tough times. For $50 in small town Iowa you expect way better.

My friend and I played Bos Landen for the first time on July 23, 2018. We have lived in Iowa a long time and had heard rave reviews, so we really anticipated a great day.

What we experienced was anything but great.

First of all, understand, the staff was fine. They weren't overly helpful, but they were attentive. How hard is it to take your money and send you to the tee? Also, it was a beautiful day, and the course wasn't crowded at all. We finished in 3.5 hours (although it might have been 2.5 if not for all the lost balls caused by the wonky layout).

From the first tee shot, we discovered what we hate about Bos Landen ... a plethora of blind shots and forced layups. I drilled my first tee shot long, right down the middle, with about a 3-yard draw. Couldn't have hoped for a better swing on the first tee. But when the ball hit the ground, it immediately careened hard left. When we got to where the ball should have been, we discovered a bottleneck in the fairway. On one side was long "junk" ... tall fescue, water, small trees, etc. On the other side was water. None of it was visible from the tee, and there was no map on the card. I had no idea that a forced layup was required.

As the round wore on -- and I do mean WORE -- we found more of the same. Blind tee shot after blind tee shot, forced layup after forced layup -- at least 7 or 8 forced layups off the tee. Doglegs that force you to hit irons off the tee, then leave you with a longer second shot than your tee shot. I've never had a day where my ball-striking was so spot-on, my putting was really good, yet I put up such a bad number. The madness continues right up to the last hole, where you have a forced carry of 200 yards, but a pond at 250. Add to that the baked fairway conditions, and it's just a recipe for disaster.

There are courses in Iowa that are challenging. The Harvester is a bear, but it's fair. Amana requires tremendous accuracy. Spirit Hollow gives you an all-around challenge. Bos Landen simply isn't fair. It tricks you into big numbers with blind shots and forced layups. And for such a well-regarded course, the conditions -- other than the greens and tees -- were abysmal. Water grass everywhere, baked fairways, rough choked with weeds, bunkers like concrete (even though it hadn't rained in two weeks). In fact, the bunkers were so hard and pebbly that we refused to hit out of them for fear of damaging our clubs.

I will never play this course again. The only reason I gave it 2 stars was because of the price. I guess at $32, you get what you pay for.

So you're saying I need an app to play a golf course. Honestly, bud, the last thing I want or need on a golf course is my stupid phone.

You paid $32 fro 18 holes and your complaining about conditions? And you complain about layout, but didnt look at the course a head of time, bring a gps or just pull up an app that has course layouts on it? sounds like this was all on you bud.

Well worth the drive.

Had a beautiful day on a really fun course Thursday.

Great Course Worth the Drive

Got a great deal on Golfnow but could not convince friends to take Monday 8:00 am time. Needless to say I flew around the course in 3 hours even playing a second ball on occasion. I think we can get down there before the weather takes a turn.

I travel for work and this course is conveniently located next to the hotel I stay in when traveling to Iowa. Always in good condition and never too busy through the week.

Course was in great shape. Unfortunately greens had been aerated and top-dressed recently. Very hilly with numerous blind shots and hidden trouble. GPS on cart was essential to good play. Overall an enjoyable experience with the exception of the greens.

The course was great and a challenge. Beautiful conditions. However they were understaffed with no starter or beverage cart person. There was great confusion at the 1st tee box as to what group was to tee off. Also the signage between holes was very poor to nonexistent. The course of this caliber needs to have some of these other issues upgraded. That would make a terrific experience.

Thank you for playing Bos Landen and for leaving some great feedback. We will look at some of these issues and see where we can improve. We hope to see you again sometime soon.

You need course knowledge to enjoy a round.

The doglegs and hills leave you a lot of blind shots. Without prior knowledge of the course you do not know where to aim. GPS in carts only shows distance.

I found the course to be in great shape after some heavy rains. The greens were excellent, rolled true and were a challenge. The staff was working on the course but we're unobtrusive and observed etiquette. All together a nice round of golf. I will return.

The course has undergone management changes over the years but has remained one of the premier courses in South central Iowa. If you are in the Knoxville, Pella and even Des Moines and you want a great round of golf in a timely manner this is your course. Staff was super friendly. This year they have added GPS to all the carts. It isn't the fanciest system but it more than does the job. Negatives include, bunkers could use a little TLC and they currently have no kitchen so food is scarce.

Course was in relatively good condition especially since it rained very heavily the day previous. Mostly cart path only but pace of play was great and course didn't slip away while closed.

Really disappointed by the pace of play.

Nice course for the money, but as stated pace of play an issue. At one time there was 3 great waiting to hit on the 6th tee box.

Great layout with a variety of challenges. Greens were in perfect shape and very challenging. Doglegs of both directions and plenty of elevation changes. If i lived in the area i would be a regular player here.

Great course for a great price. Course is in great shape and is a fun course to play. I would highly recommend it.

I've been making the trek out from DSM at least once a year for the past 3 seasons. The course has been in great condition despite the lack of rain. The fairways, greens and tee boxes are cut short. The greens are rolled to perfection - watchout for this downhill putts! The hole and course layout are well thought out and designed. Each hole is unique and different. This is probably one of my favorite course layouts in the area. It's a tight, target course with some blind shots that challenges club selection.

You have to hit the fairways on this beautiful course or the rough will make you pay.

Course fun to play and in excellent condition. Staff are very helpful and courteoush 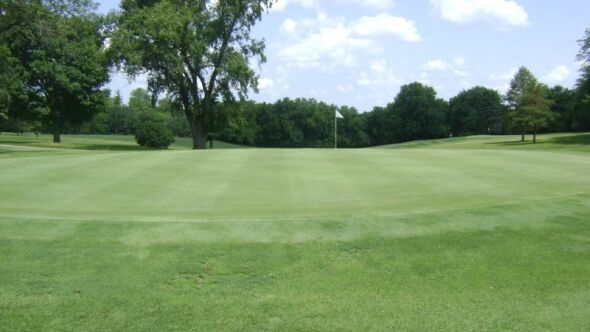 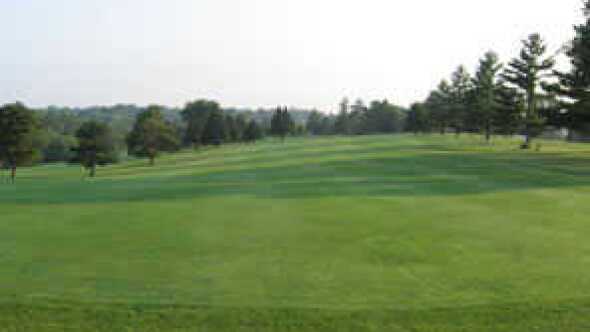 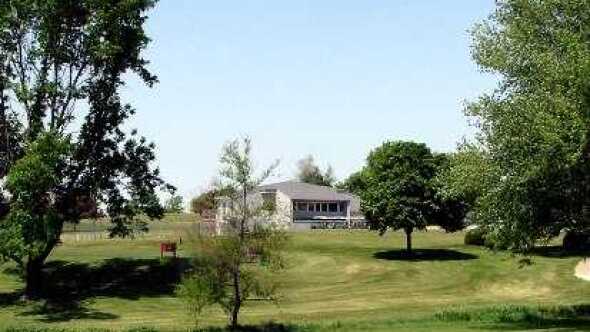 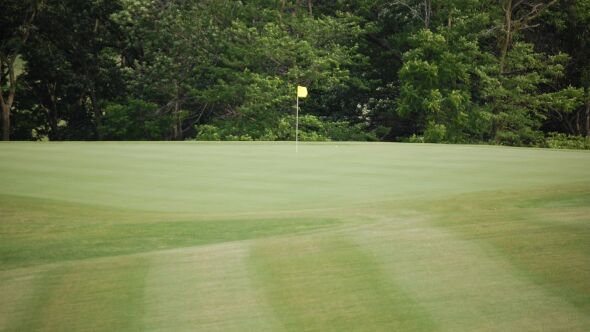 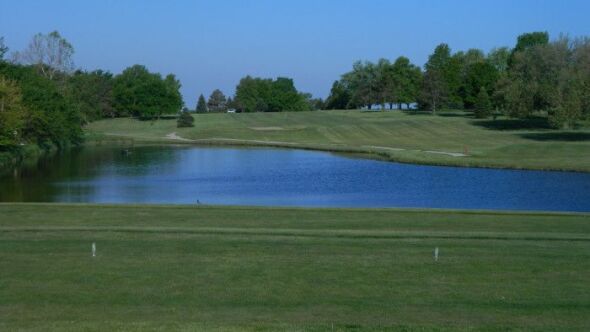 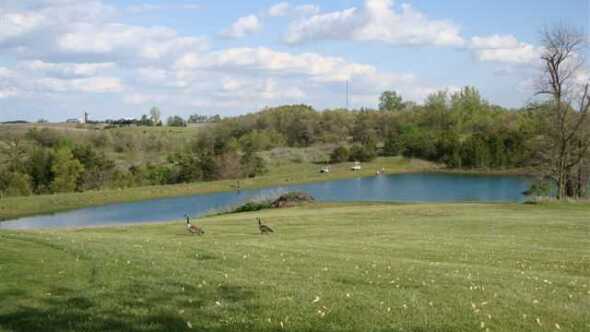 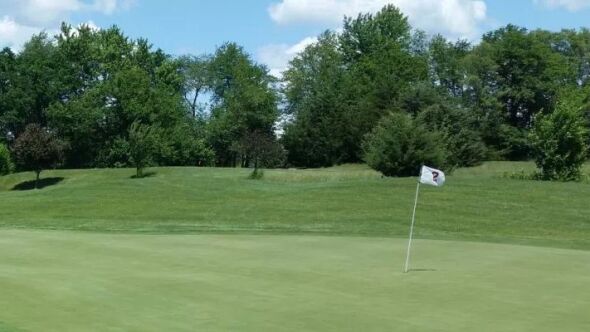 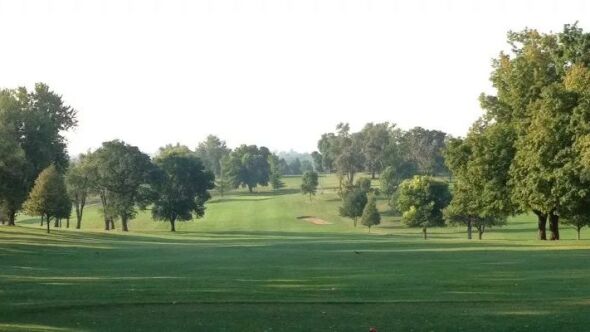 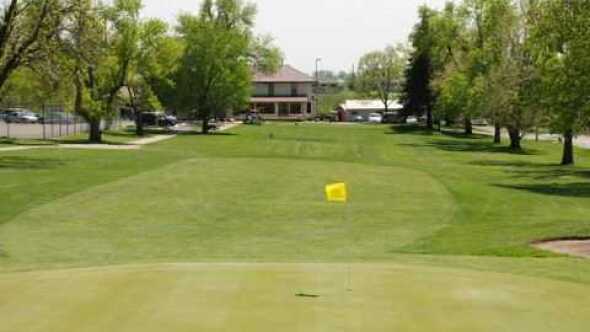 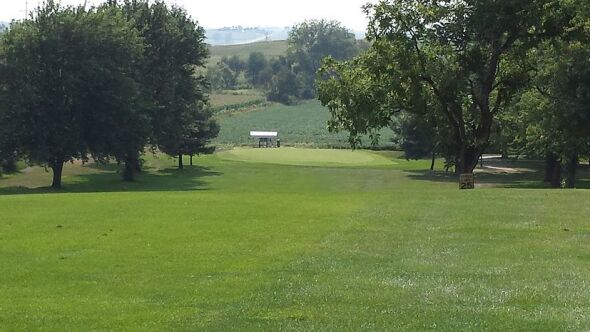 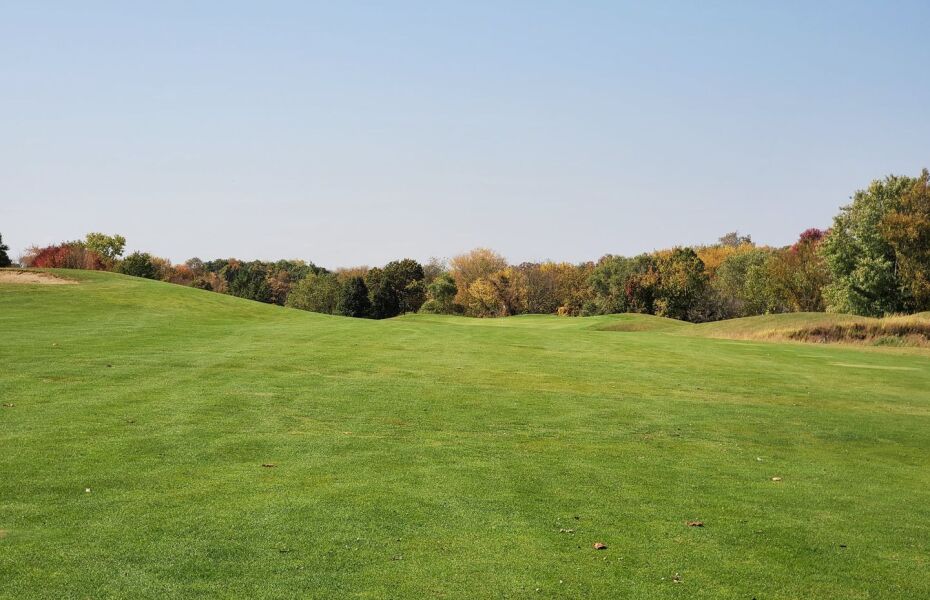 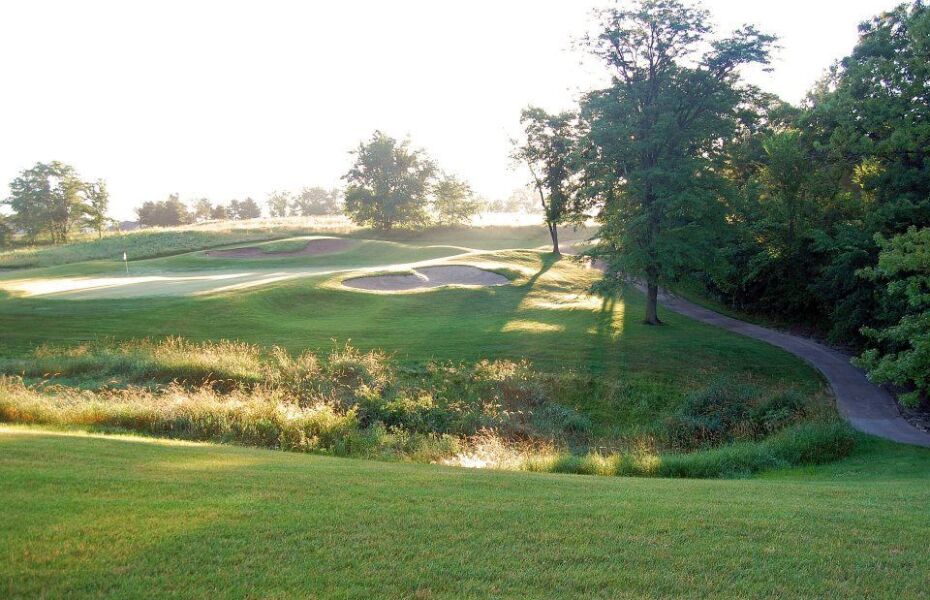 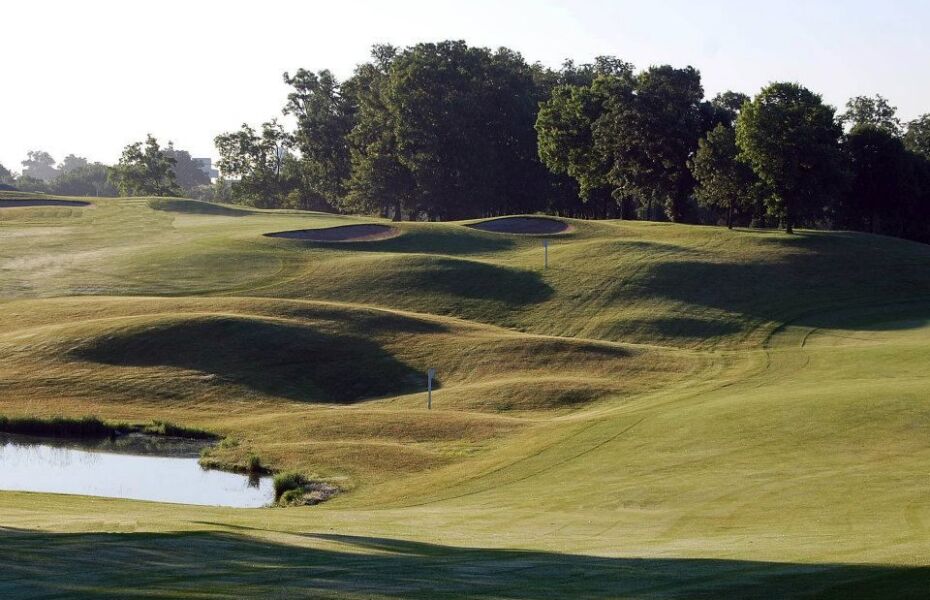 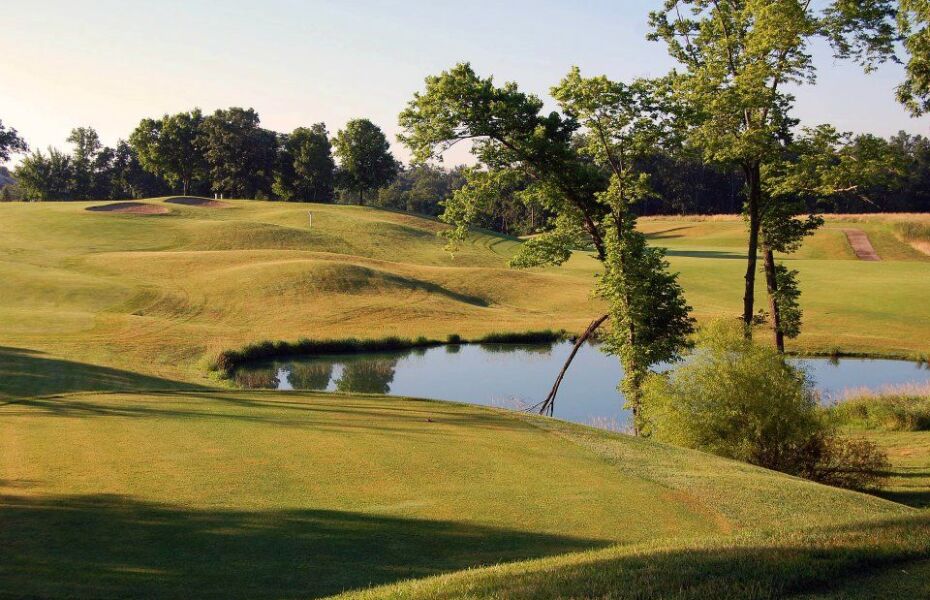 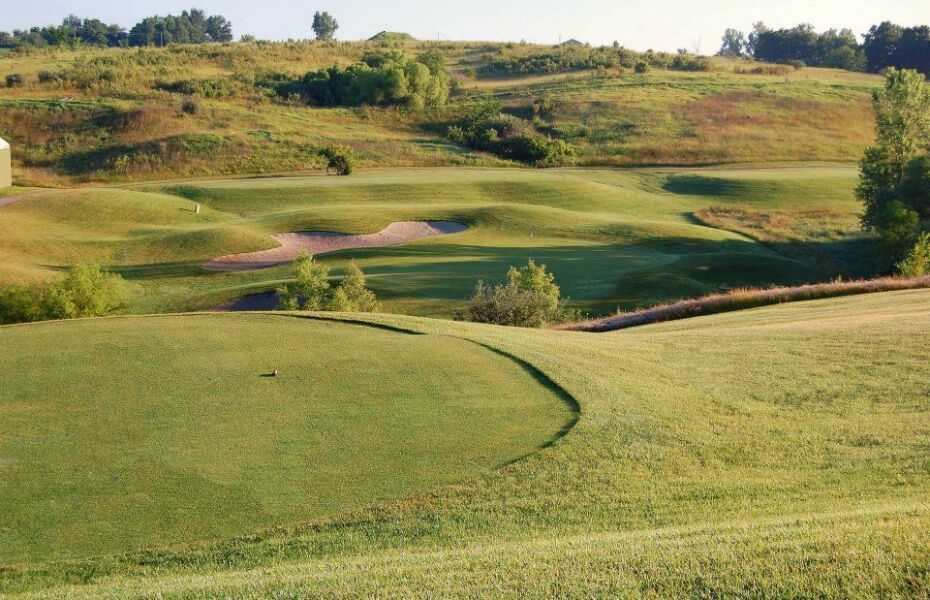