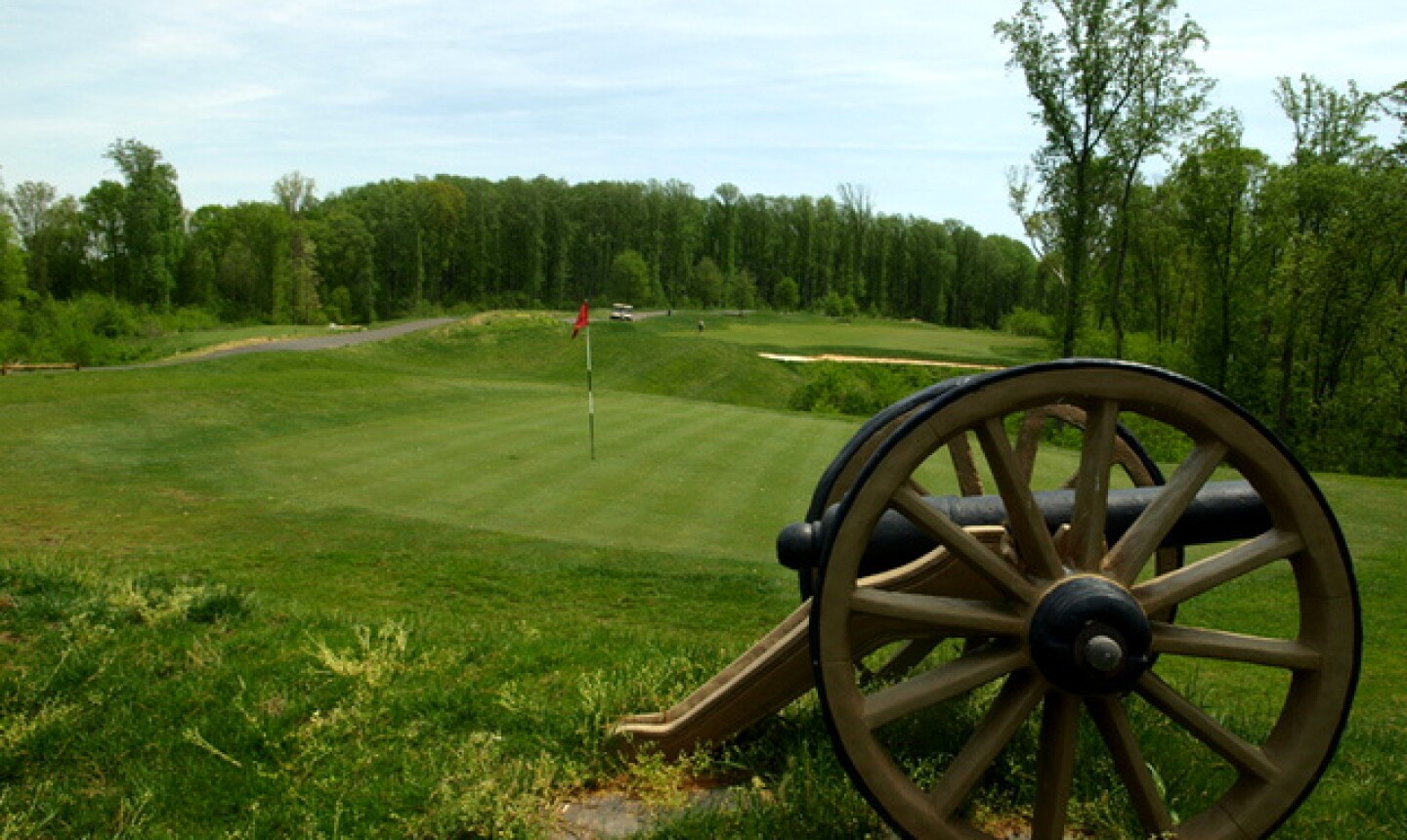 A cannon is positioned behind the 14th green at Cannon Ridge Golf Club in Fredericksburg, Va. Mike Bailey/Golf Advisor 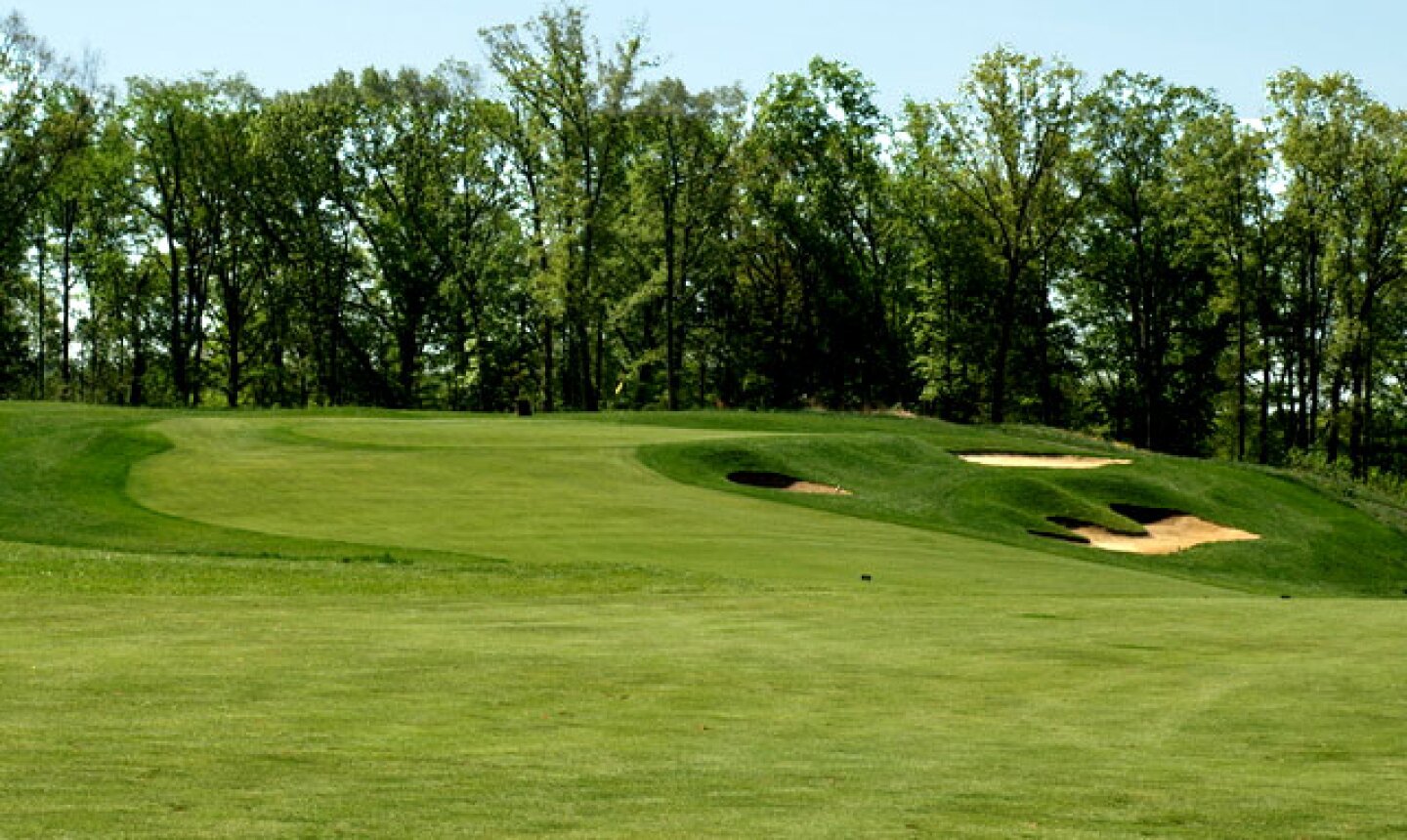 The 463-yard, par-4 fifth, which often plays into the wind, is the No. 1 handicap hole at Cannon Ridge Golf Club. Mike Bailey/Golf Advisor 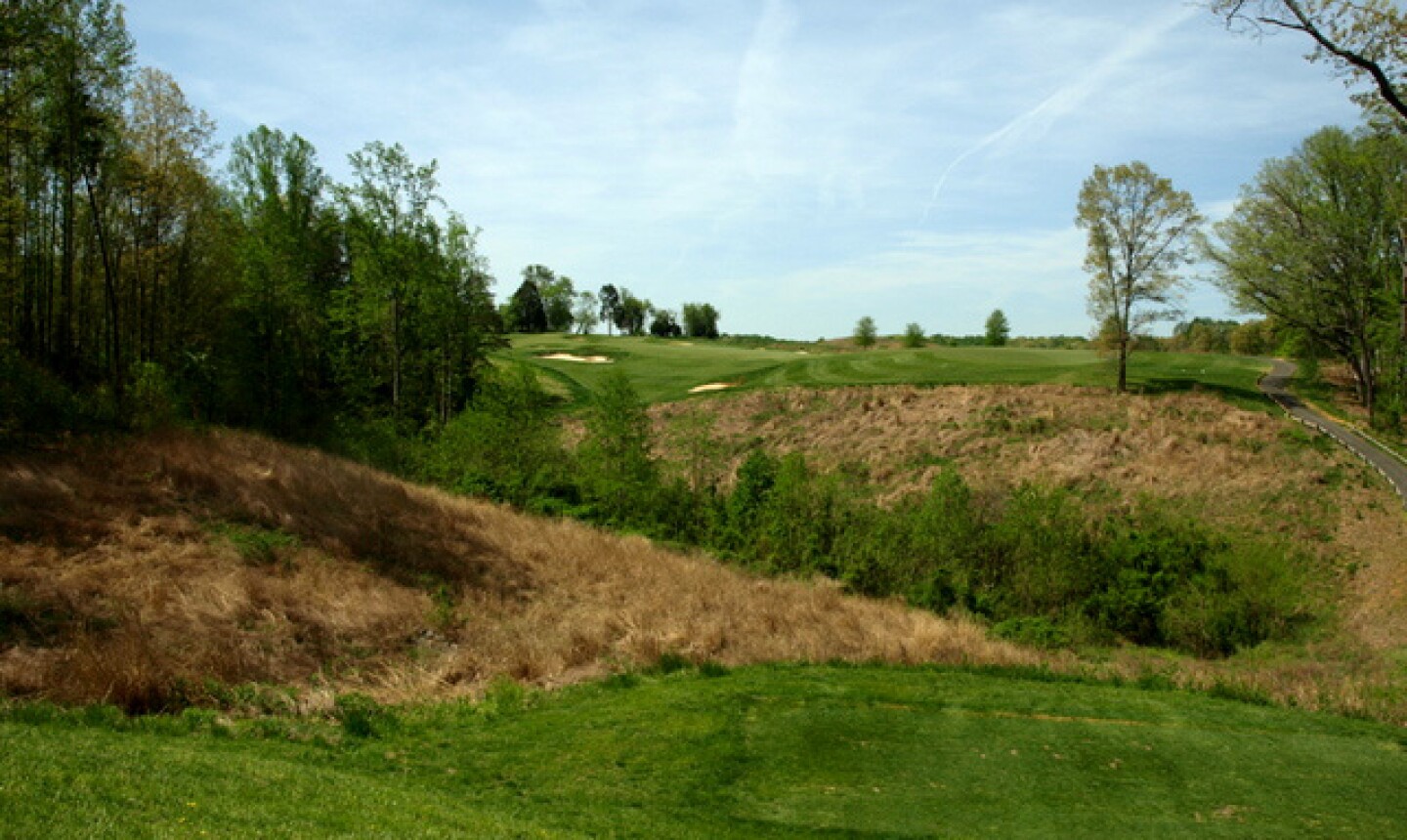 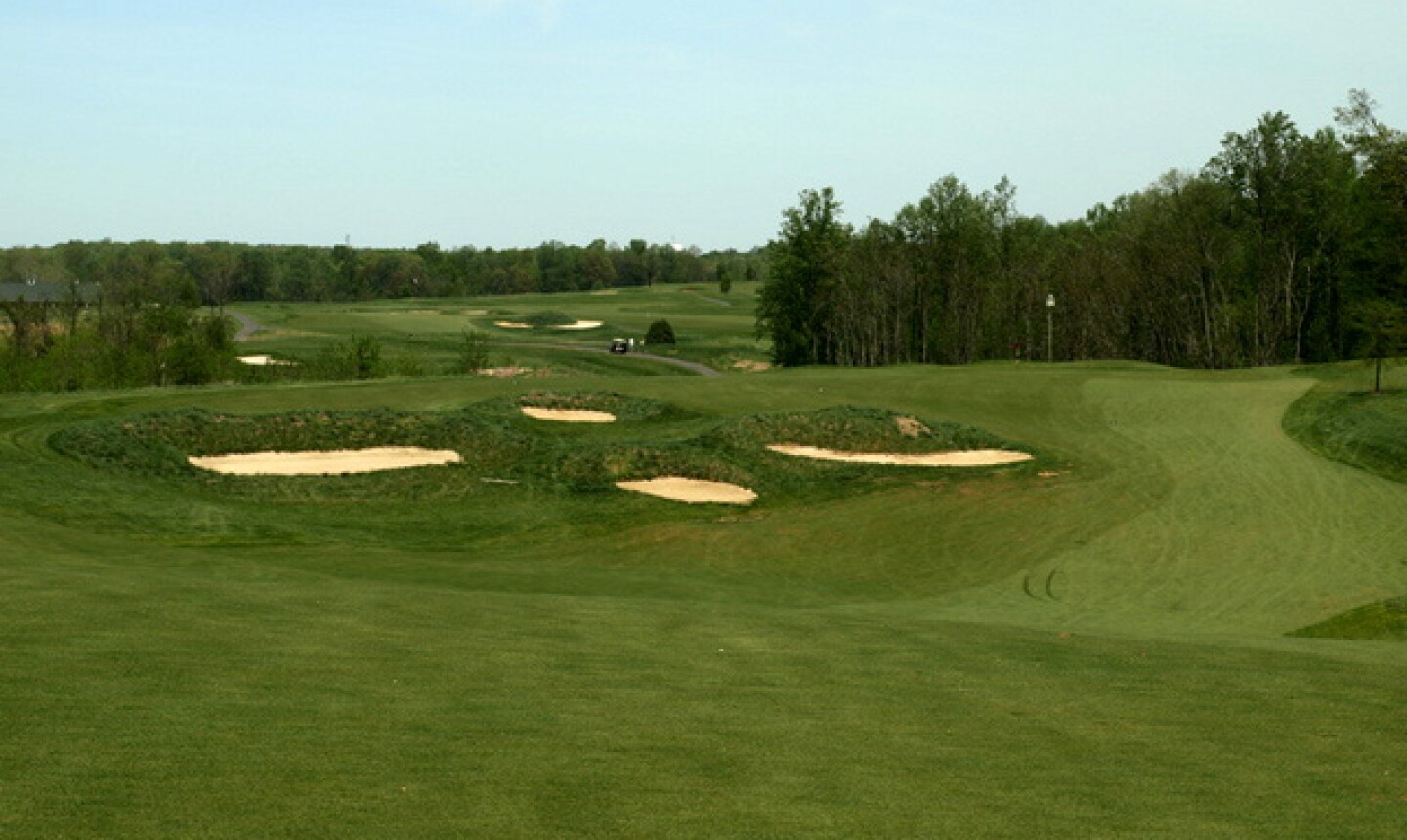 The birdhouse is the target on this blind shot into the par-5 16th hole at Cannon Ridge Golf Club in Virginia. Mike Bailey/Golf Advisor

FREDERICKSBURG, Va. - By the time you get to the back nine of Cannon Ridge Golf Club, you'll spend as much time reading the metal placards around tee boxes and greens as you will the yardage book.

After all, what took place nearly 150 years ago is probably a little more interesting than what will occur in the next 15 minutes.

It was Dec. 11, 1862, when the Battle of Fredericksburg began here about an hour south of the nation's capital. It started on the ridge above the Rappahannock River, which cuts through Cannon Ridge Golf Club. The Union Army set up cannons on the ridge to give cover fire for the troops. After four days of battle, Gen. Robert E. Lee and the Confederates drove out the Union.

There you have it - a history lesson if you weren't paying attention in school. You can still see cannons on the ridge here, but now the battles are a little safer as golfers try to defeat this layout designed by former PGA Tour player/commissioner Deane Beman and renown golf course architect Bobby Weed.

Opened in 2003, Cannon Ridge is a 7,100-yard par 71. Today's battles are waged with drivers and putters on L-93 bentgrass, which covers the greens, tee boxes and fairways, and tall fescue and Kentucky bluegrass in the roughs.

Plenty of strategy and challenge at Cannon Ridge Golf Club

As you tour this historical 200-acre site on a golf cart, it's easy to see where these battles might have taken place. On one placard, you can learn about Bank's Ford, where the Union's Gen. Ambrose Burnside tried unsuccessfully to lead his troops in advance known as the failed "Mud March."

After reading that, trying to figure how to lay up short of the ravine on the short, par-4 14th doesn't seem like such a daunting task.

There is plenty of challenge, though, on this course that's ranked the second toughest in the state. Play it from the tips, and there are some visually intimidating forced carries on some of the par 4s and par 5s.

Cannon Ridge meanders up and down hills, over streams and water hazards with plenty of bunkering to catch errant shots. The push-up style greens are on the smaller side, so a good short game is extremely helpful. There are also a few blind shots and tough sidehill lies and plenty of great views.

The toughest hole is the 463-yard, par-4 sixth, which usually plays into the wind. Three deep bunkers protect the elevated green, a common theme throughout the course. The next hole is even longer, at 499 from the tips, with a difficult approach to a green protected left and right by large bunkers.

The golf course is imminently playable, however. There's plenty of room off the tee and plenty of options. The par 5s are all reachable by really strong players but set up well as three-shot holes, too. The 18th, at 537 yards, is a good risk-reward hole to end a match. Miss the green and getting up and down in three isn't even a certainty to this elevated green with tightly mowed chipping areas.

There aren't too many places where you can play golf and get a history lesson at the same time. Cannon Ridge is enjoyable on both fronts.

It starts with a large clubhouse with a well-stocked golf shop and an inviting bar and grill. (Try the Texas brisket, believe it or not.)

Beman - who has come up with a golf learning program here called 6/90 to teach beginners or really bad hacks to shoot 90 or better in six months - helped create a golf course that really is playable by all levels. The tee boxes are situated in such a manner that they not only shorten the course for lesser players but also eliminate some obstacles they might not be capable of navigating.

Cannon Ridge also has a good practice facility as well as a golf academy. The driving range has two sets of tee boxes that can be alternated, and a portion of the range is set aside for lessons. There is also a very large chipping green and putting green near the first tee.

Green fees range from $59 to $79, and packages are available with local hotels. Even if you're having a bad round, the historical tour alone around Cannon Ridge makes it all worth it.

What happened to the golf course? 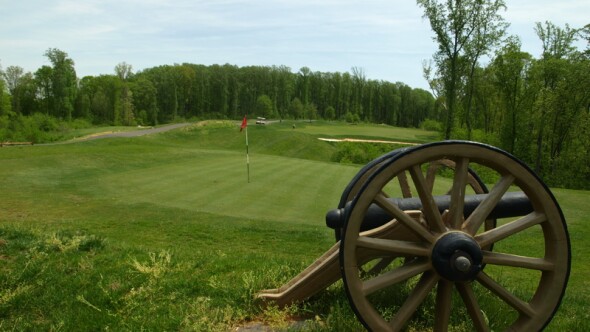 Galleries
Photo gallery: Cannon Ridge Golf Club in Fredericksburg, Virginia
A challenging course, Cannon Ridge Golf Club is also a four-hour history lesson. This Deane Beman/Bobby Weed-designed, 7,100-yard par 71 not only provides plenty of interesting golf holes but several metal placards throughout the course that tell stories of battles and maneuvers that occurred during the Battle of Fredericksburg here in 1862.
15 Images