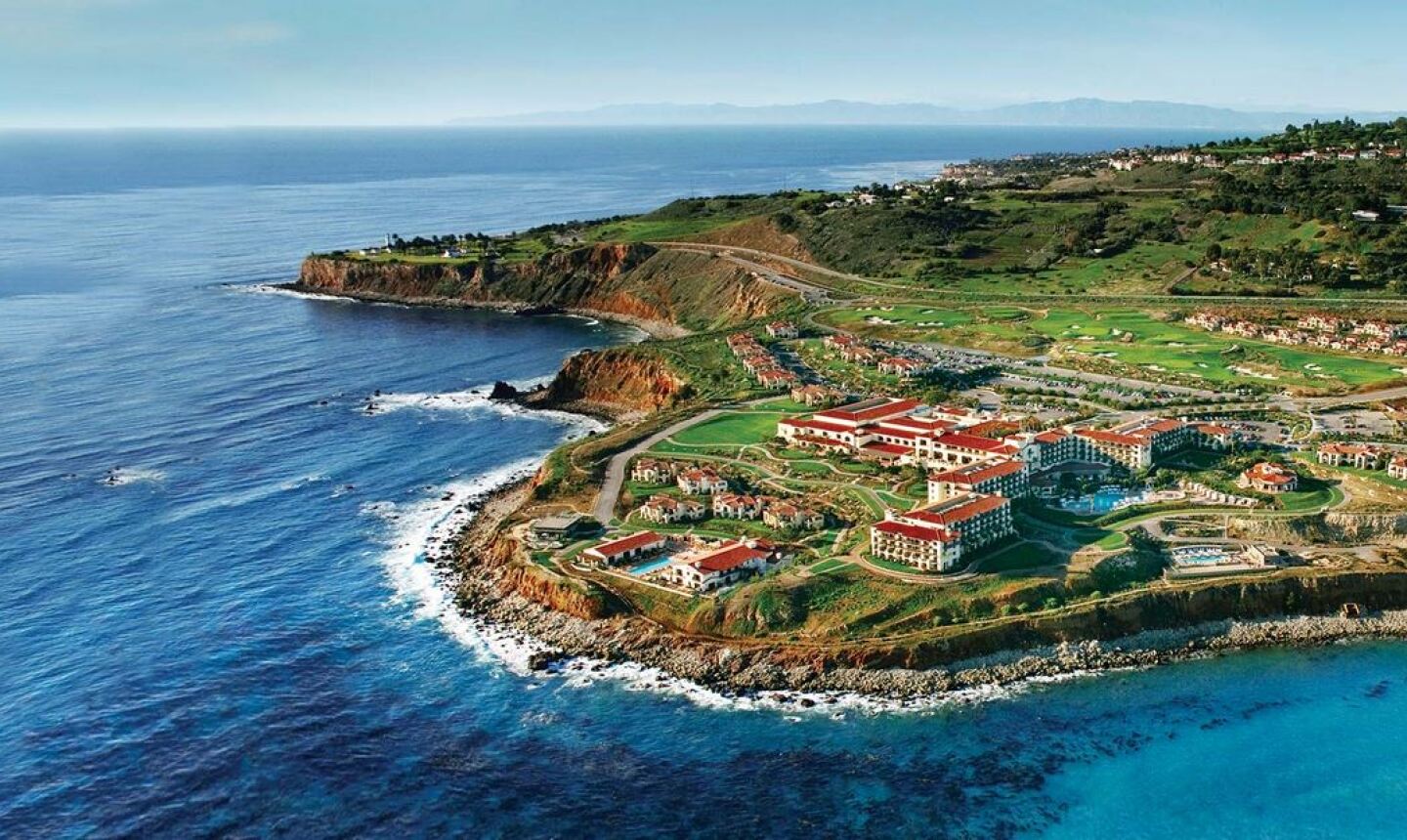 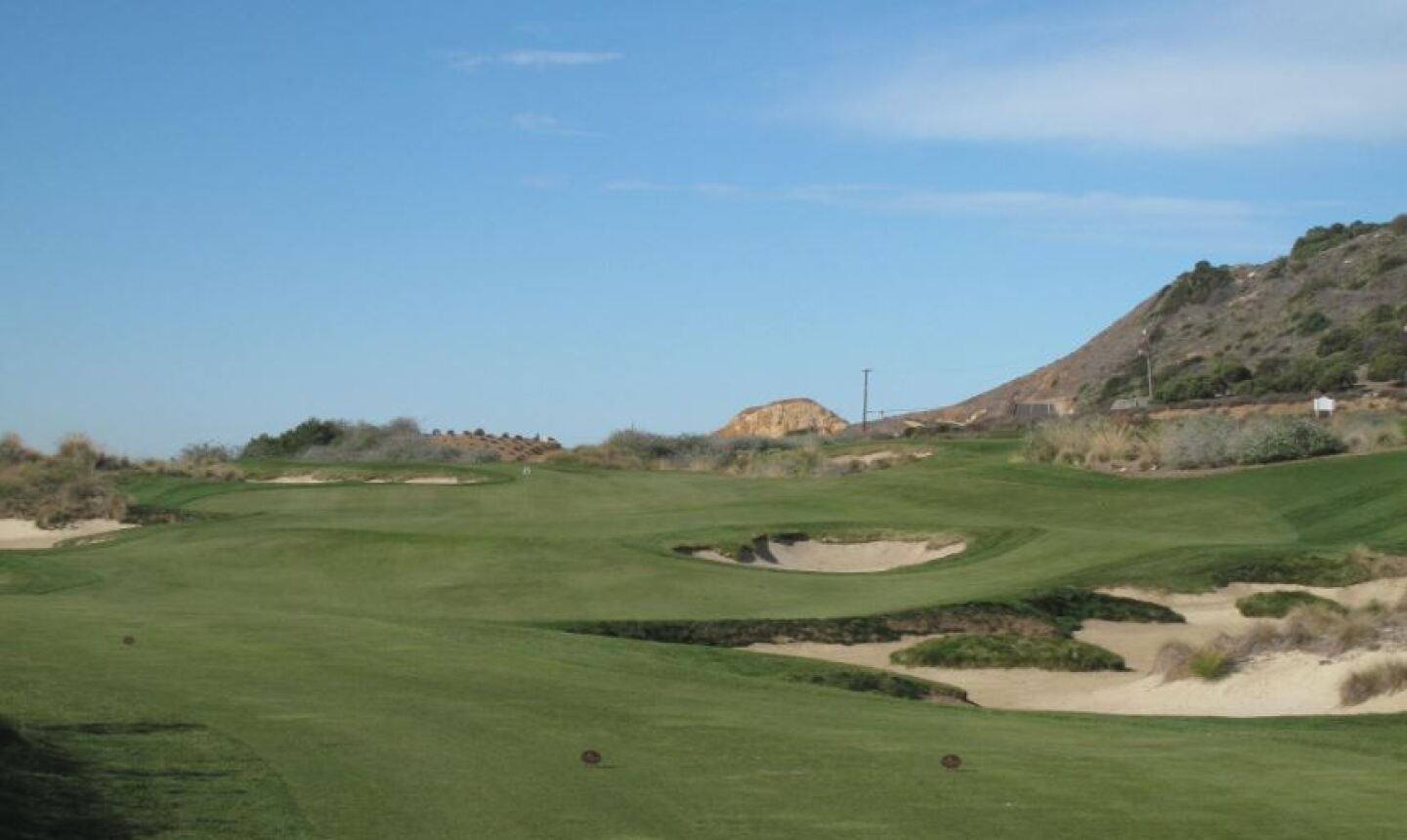 The Links at Terranea, a nine-hole par-3 golf course, plays 2,478 yards from the tips. Robert Gray/GolfAdvisor 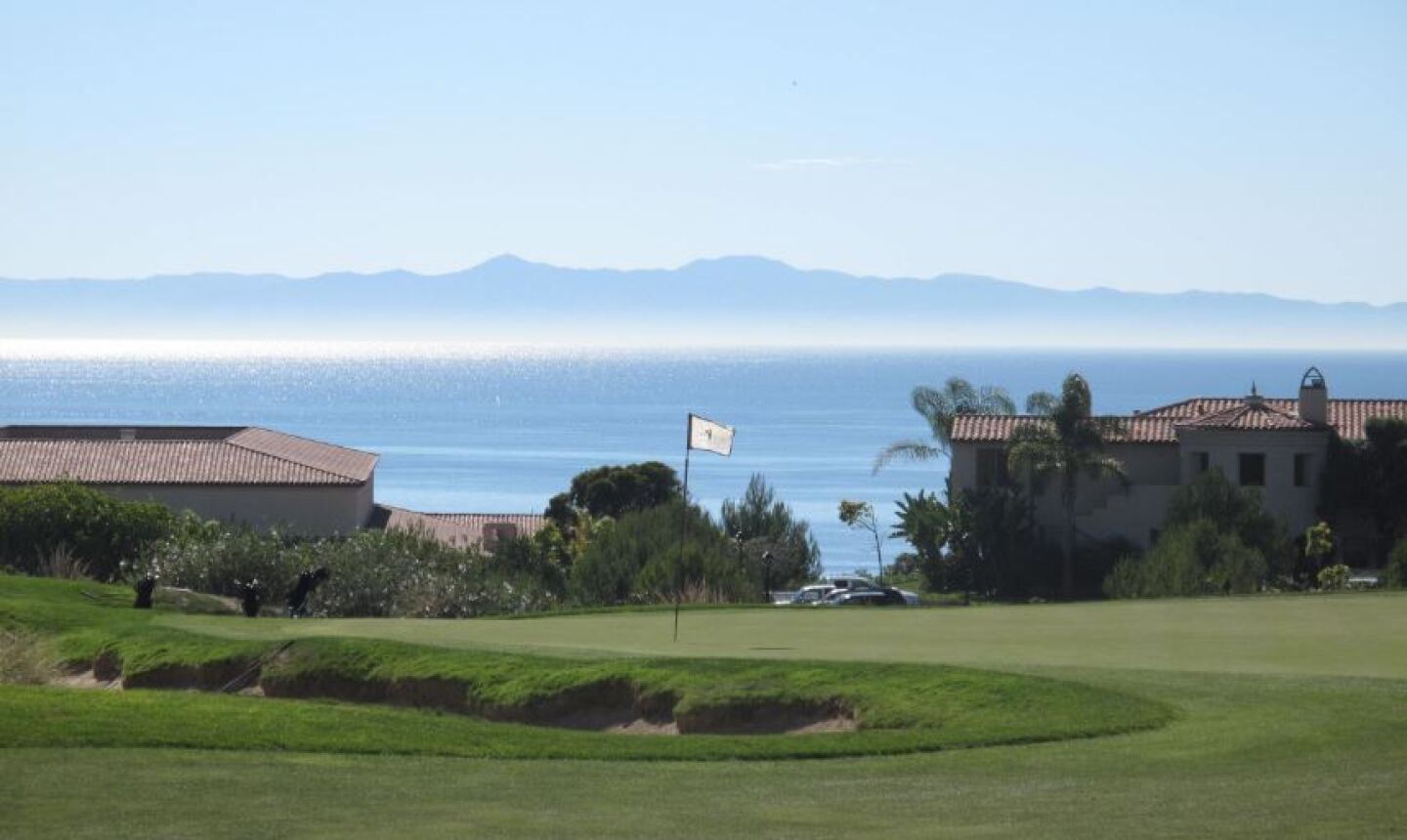 The Links at Terranea provides a view of Catalina Island in the background. Courtesy photo 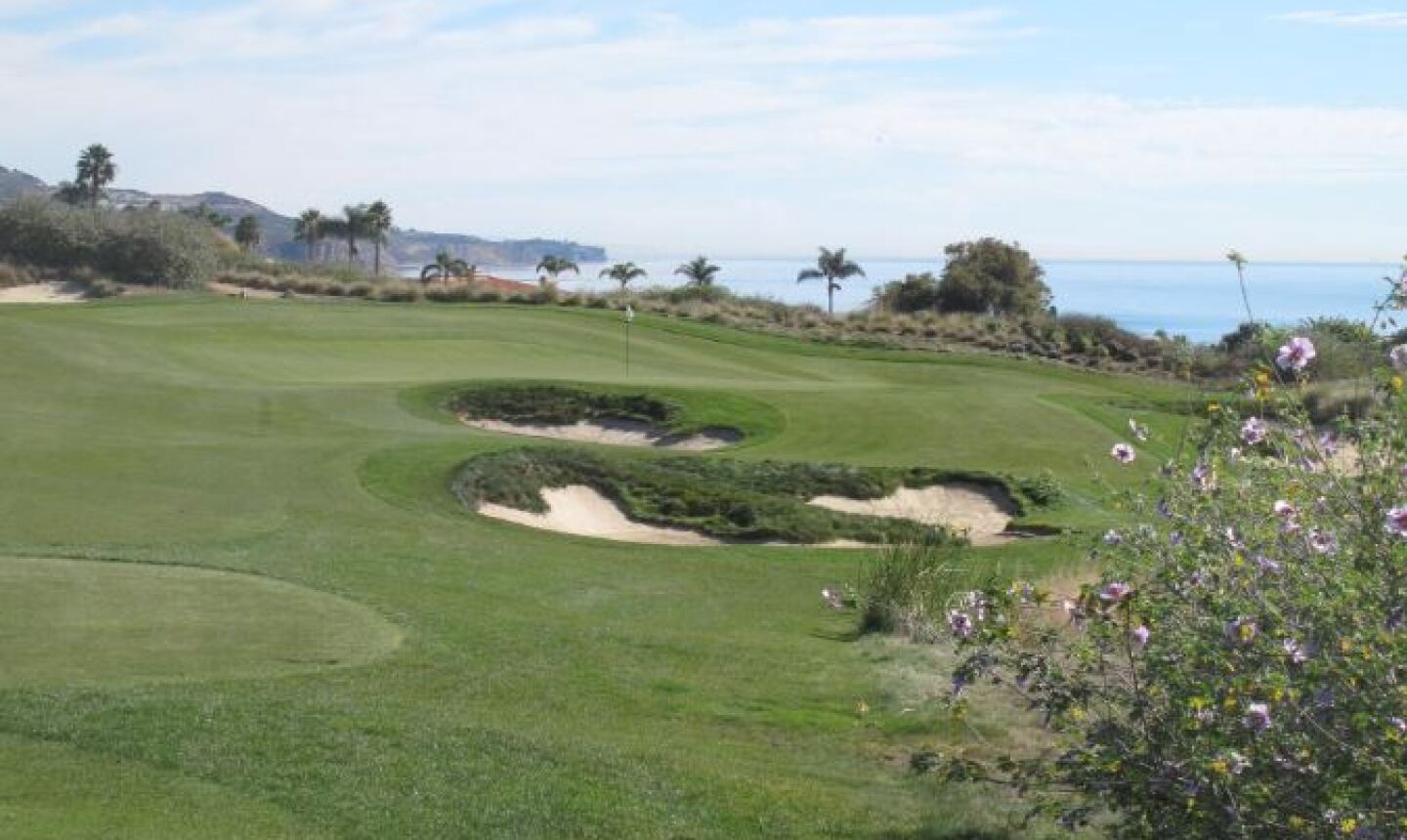 The greens at the Links at Terranea golf course tend to run fast, especially in the dry, colder months. Robert Gray/GolfAdvisor 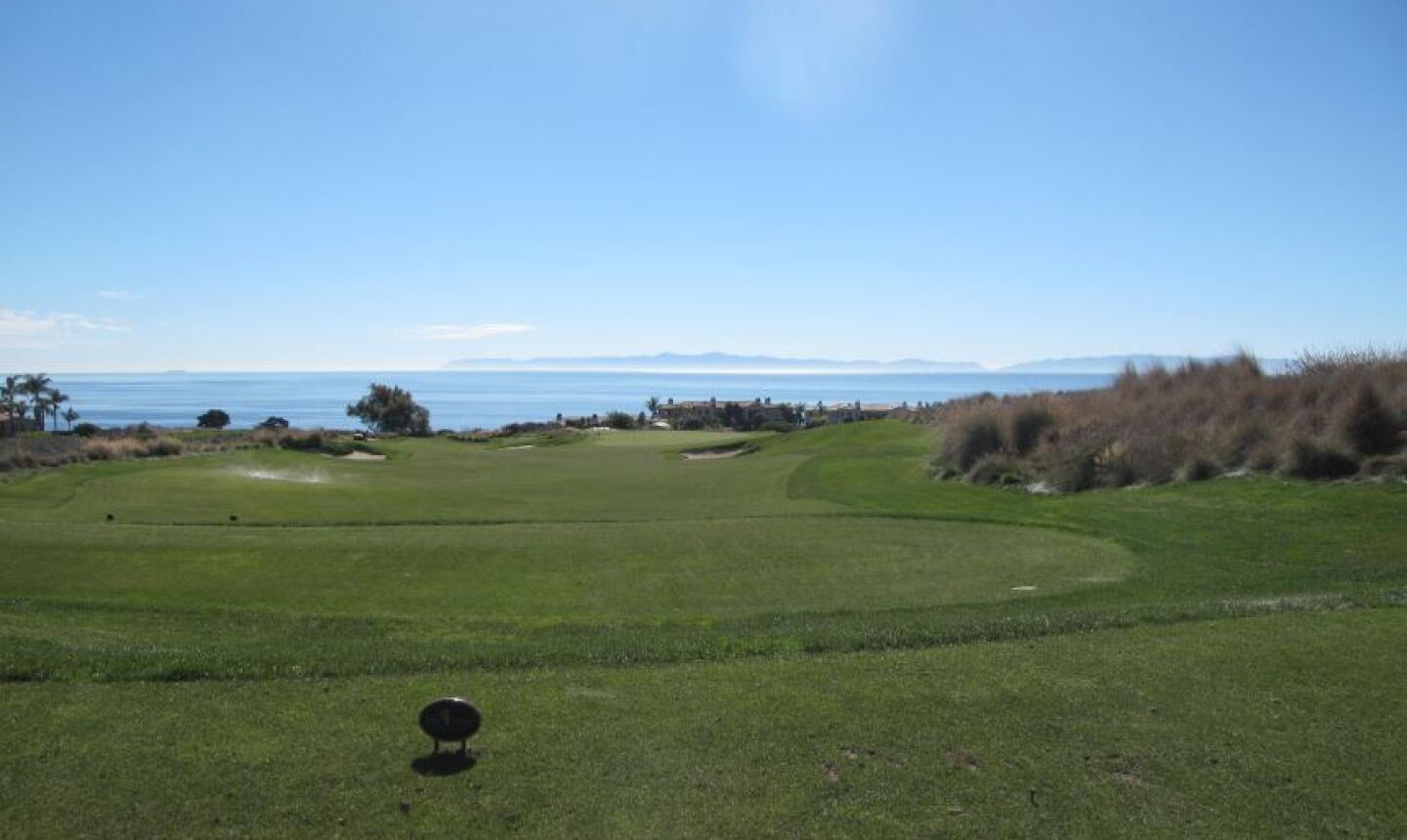 A view from the eighth tee box at the Links at Terranea golf course. If you're going to whip out your smartphone or camera, this is the spot to do it. Robert Gray/GolfAdvisor 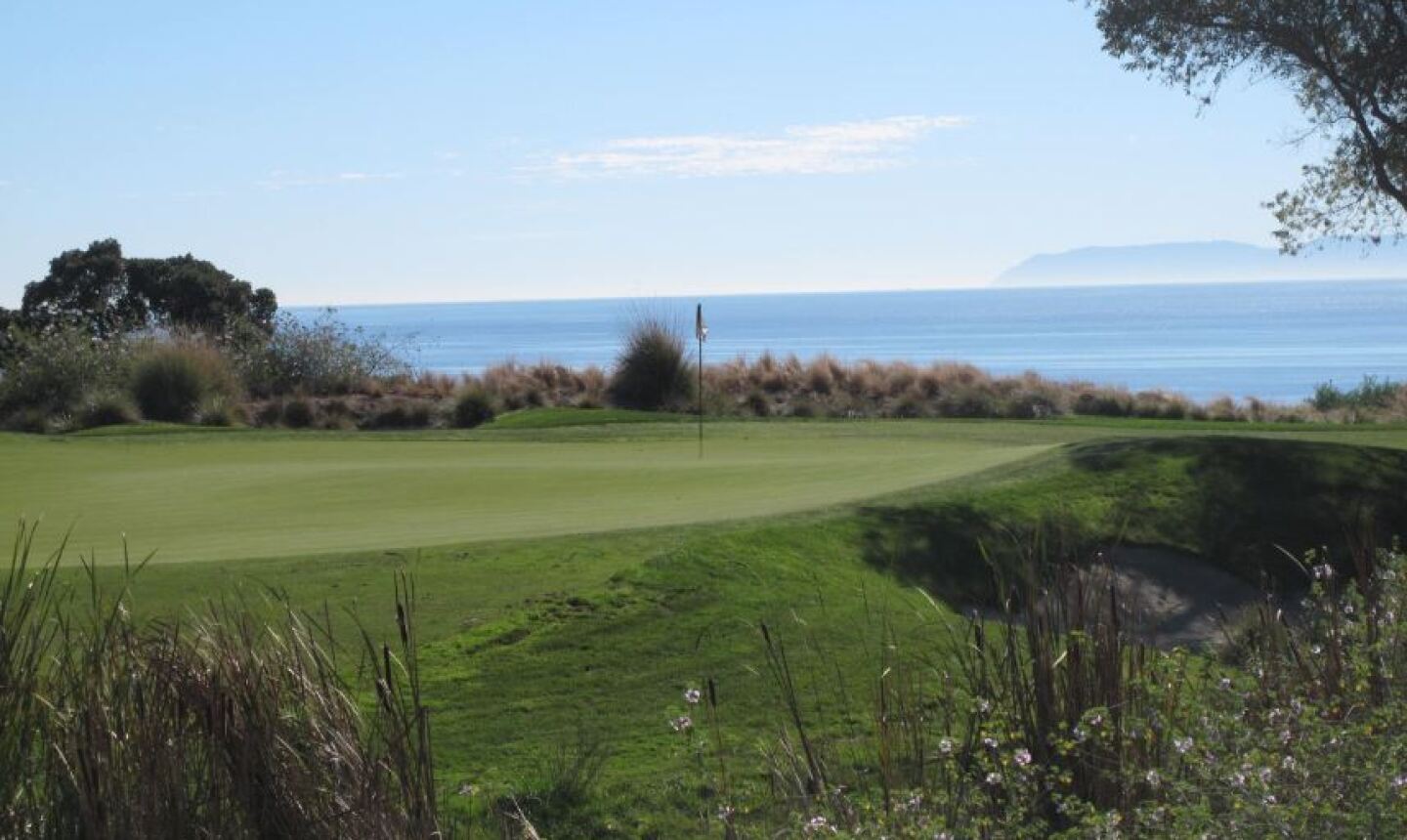 The ninth hole at the Links at Terranea golf course has a tricky slope down into a bunker if you miss the green. Robert Gray/GolfAdvisor

RANCHO PALOS VERDES, Calif. -- The oceanfront Terranea Resort is located just a chip shot south of Los Angeles. Given its picturesque location on a peninsula jutting out into the Pacific Ocean, the resort has become a popular day-trip destination since it opened its doors in 2009.

Terranea's proximity to airports in L.A. and Long Beach -- it's an equidistant 20 miles from each -- provides easy access for far-flung visitors as well.

"We generally have 60-to-65 percent local golfers, 30-to-35 percent resort play (plus property owners)," said Mike Hill, the golf professional at Terranea. "But that varies on occupancy and season. In winter there are more locals playing, and in summer the resort totals are up."

Locals frequently make the short drive to tee it up on one of the nation's top-rated par-3 courses (Golf Magazine ranked it No. 2 in the U.S.), hike along the rocky shoreline, relax at the spa or grab a drink or bite to eat at one of eight eateries and bars.

"Of course it is (worth the drive down)," said Armie Pascencia, who drove from downtown L.A. to play nine holes on the Links at Terranea and then have lunch at the resort. "(The course) is quite challenging but breathtaking. I would play it again. It tests your accuracy."

"It was beautiful -- the greens, the fairways, everything was perfect," Givens said.

"I wish it was longer (than nine holes)," he said. "It's much more beautiful than other public courses in the area, but I wouldn't come again (just for golf)."

Terranea recognizes it is not foremost a golf resort (although it does allow and encourage guests to play 18 if they wish). Rather, it seeks to offer top-notch links with time (and money) left to spend elsewhere on the grounds. The green fees start at $40 for nine holes during the week, which is inexpensive for the area given the high quality of both the course and the resort.

The links are offered as an amenity as opposed to building an experience around the fairways.

"If you are a golf enthusiast, you can play the links in an hour or one-and-a-half hours and get back for breakfast," Hill said. "Or you can come out with the family and play in the afternoon."

As the name implies, Terranea aims to transport visitors to a Mediterranean destination. The sprawling green campus covers 102 acres and features dramatic views overlooking a rocky shoreline below the steep cliffs, where you can see out to Catalina Island and the open sea.

Fans of a 1950s and '60s TV series may even get a sense of deja vu. That's because the property was prominently featured in "Sea Hunt" (when the grounds were home to the 1950s-era Marine Land theme park), and some of the shoreline was used as an exterior for the Batcave in that era's campy "Batman" serial.

There are nods to the resort's nautical past everywhere, from its casual restaurant overlooking the sea named Nelson's (named after Lloyd Bridges' character in "Sea Hunt"), to the naming conventions on each hole of Terranea's track. For instance, No. 9 is called "Whale Road" as it affords sea views to the route where whales make their annual migrations. Pro shop employees say they frequently see pods of whales from their posts in the Golf House as well.

The sprawling resort offers an array of lodging options, including the main hotel rooms and suites, bungalows, casitas and villas. It also sells properties to investors looking for a unique southern California getaway.

Terranea offers a number of restaurants featuring Italian, Asian and American cuisine, with a warm and inviting bar area and terrace overlooking the Pacific Ocean in the main building. The casual dining experience at Nelson's offers the best value and experience, with its commanding cliffside views of the Pacific, and features a bell for visitors to clang when they spot whales -- think a calmer version of Roy Scheider in "Jaws" alerting guests, not alarming them.

The resort is also known for holding major conferences and has a relaxing spa area, adult pool area that is open in warmer seasons, a children's pool with a water slide large enough for the big kids, and hot tubs in which to nurse sore muscles or stiff drinks.

The bungalows near Nelson's and the spa feature fire pits to gather round on cool evenings, and the resort offers courtesy golf cart shuttles to traverse the expansive grounds.

Visitors can hike along walking trails down to the rocky beach and cove, and golfers generally stroll the links, which play 2,478 yards from the tips. Pull carts can be rented for $5, but Terranea does offer a riding cart for handicapped or senior guests who require assistance on the hilly terrain. In fact, the course recently finished paving the cart paths to keep them from getting washed out during the rainy season, though Hill said that's not a signal Terranea is going to offer more carts anytime soon.

Befitting a par-3 course, the third is the signature hole on the Terranea golf course. It is the longest hole at 172 yards from the black tees and, because of wind conditions, can be the most difficult to play. The payoff is on the green with a stunning, panoramic Pacific view. Hill said the hole is challenging, especially given the wind, but still offers duffers an out.

"The way the hole plays with a series of bunkers with fescue grass on the left side, some good sideboards on the right, you can use the slope and don't have to carry it all the way to the hole," he said. "It plays into the wind and gives you an option to run it up with a low shot. I've hit everything from 7-iron to driver -- that was the only thing that would get there that day, with a 25-mph headwind."

The Todd Eckenrode design opened in 2009. It finishes strong with a trio of difficult, but visually stunning holes. The seventh can be deceptively difficult as you tee it uphill to a punch-bowl green. The ninth has a tricky slope down into a bunker if you miss the green, and the elevated eighth tee box commands what some golfers consider the most impressive ocean view on the course. If you're going to whip out your smartphone or camera, this is the spot to do it.

Terranea is a family-friendly resort and offers lessons for the whole family. Hill said Terranea has students ages 7 to 70-plus. The golf pro said his staff focuses on the short game and works its way out to longer shots using cameras and simulators since there is no driving range.

"We have a private teaching area with a bunker, private chipping area and putting green, and we have a putting area with two separate golf complexes," Hill said. "Every lie condition and variation in terrain can be practiced -- undulating lies to work on pitches with the ball below or above your feet. And the greens are built to the exact specifications of greens on (the) golf course."

The practice areas were built in keeping with the staff's philosophy. One staffer on a recent visit shared that vision with a customer, saying, "Most golfers practice incorrectly, in perfect conditions at a range instead of the trouble they find themselves in on the course."

Those greens tend to run fast, especially in the dry, colder months. Hill said they generally run between nine and 10 on the Stimpmeter, and on a recent visit they were rolling closer to 10 on the bentgrass greens. The Kentucky bluegrass fairways presented luscious carpets to aim over, while the bunkers are framed with fescue grass to give them a traditional look.

The lush links serve as a nexus between the enclave of villas on the resort's uphill lie with the manicured lawns and paths from the guest rooms to the bungalows, spa and restaurants, all built to maximize the point's landscape and its views. The potent combination affords guests myriad opportunities to get away from it all -- whether for a few hours or a few days.

Robert Gray
Robert Gray is a freelance journalist now based on the West Coast after covering Wall St., the economy, and the business of sports among other things for Fox Business and Bloomberg TV in New York. Prior to that, he covered sports, news and entertainment for various media in Washington, D.C. and Prague. Follow Robert on Twitter at @robertdgray.
0 Comments
More from the author 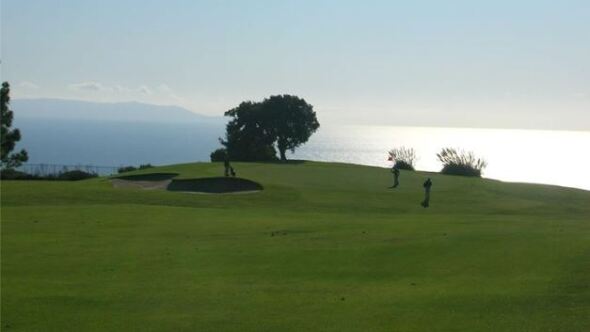 Articles
6 Min Read
Play Malibu Golf Club and Los Verdes on the unofficial PCH Tour
Tee off early in the mountains above Malibu, then head down the Pacific Coast Highway for a second round of golf that will afford amazing sunset views. 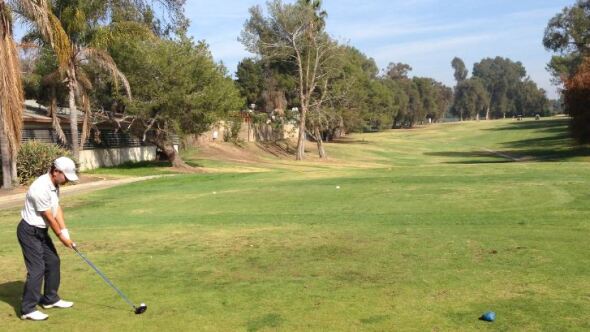 Articles
4 Min Read
Los Angeles' top muni golf courses
In Los Angeles, local golfers and savvy visitors are willing to wait a little longer on the tee because they reap the rewards of quality city golf for minimal capital. L.A.'s muni courses range from undulating fairways in the Hollywood Hills to a bucolic getaway on the West Side. Two top-notch choices are Griffith Park and Rancho Park in Cheviot Hills. Robert Gray has more.