The River Golf Club: The place to play during the Masters - and the other 51 weeks of the year

The River Golf Club in North Augusta, South Carolina is more than a Masters diversion 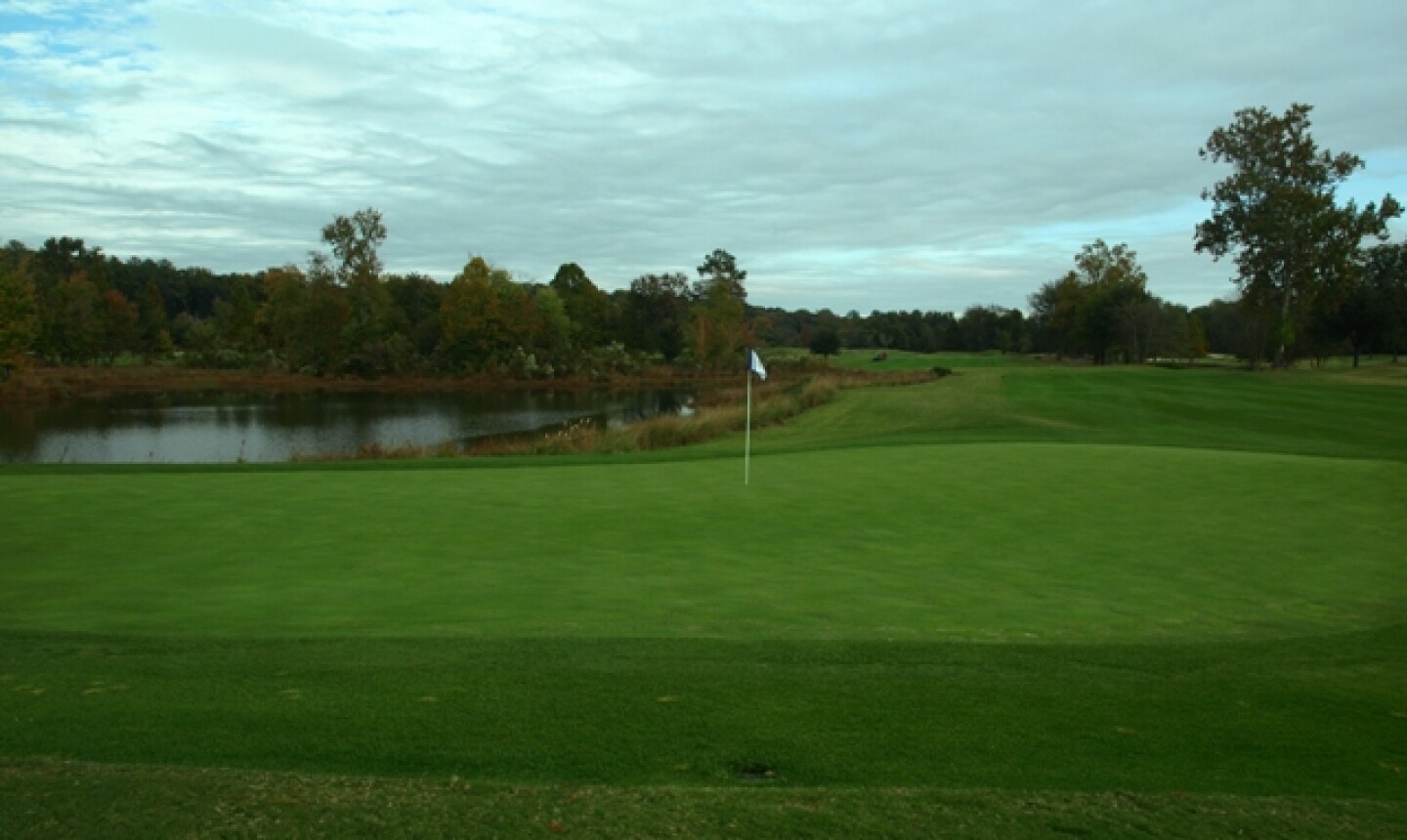 The par-4 ninth hole is one of a dozen holes where water comes into play at The River Golf Club. Mike Bailey/Golf Advisor 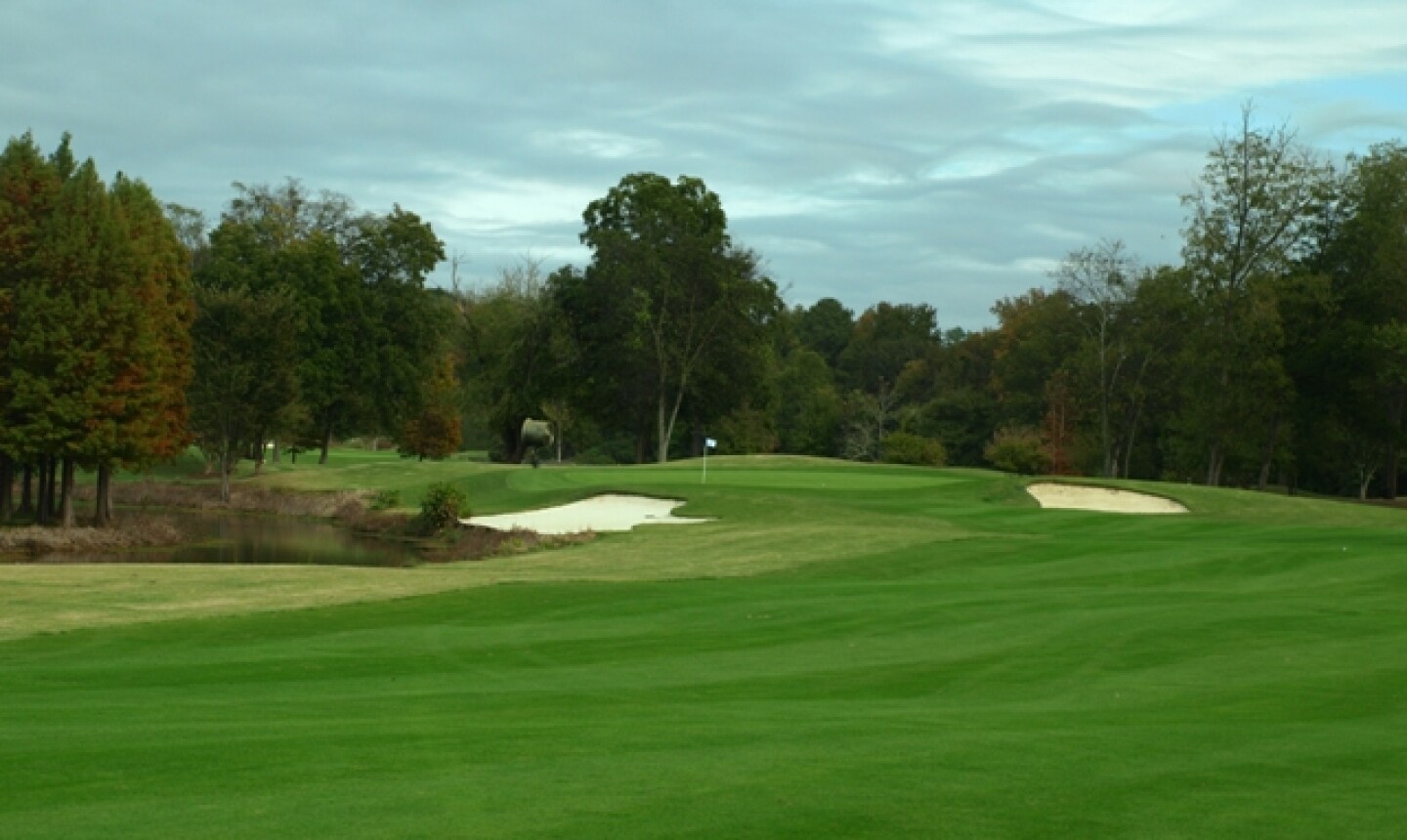 The par-4 eighth hole at The River Golf Club is a dogleg left flanked by water down the entire left side. Mike Bailey/Golf Advisor 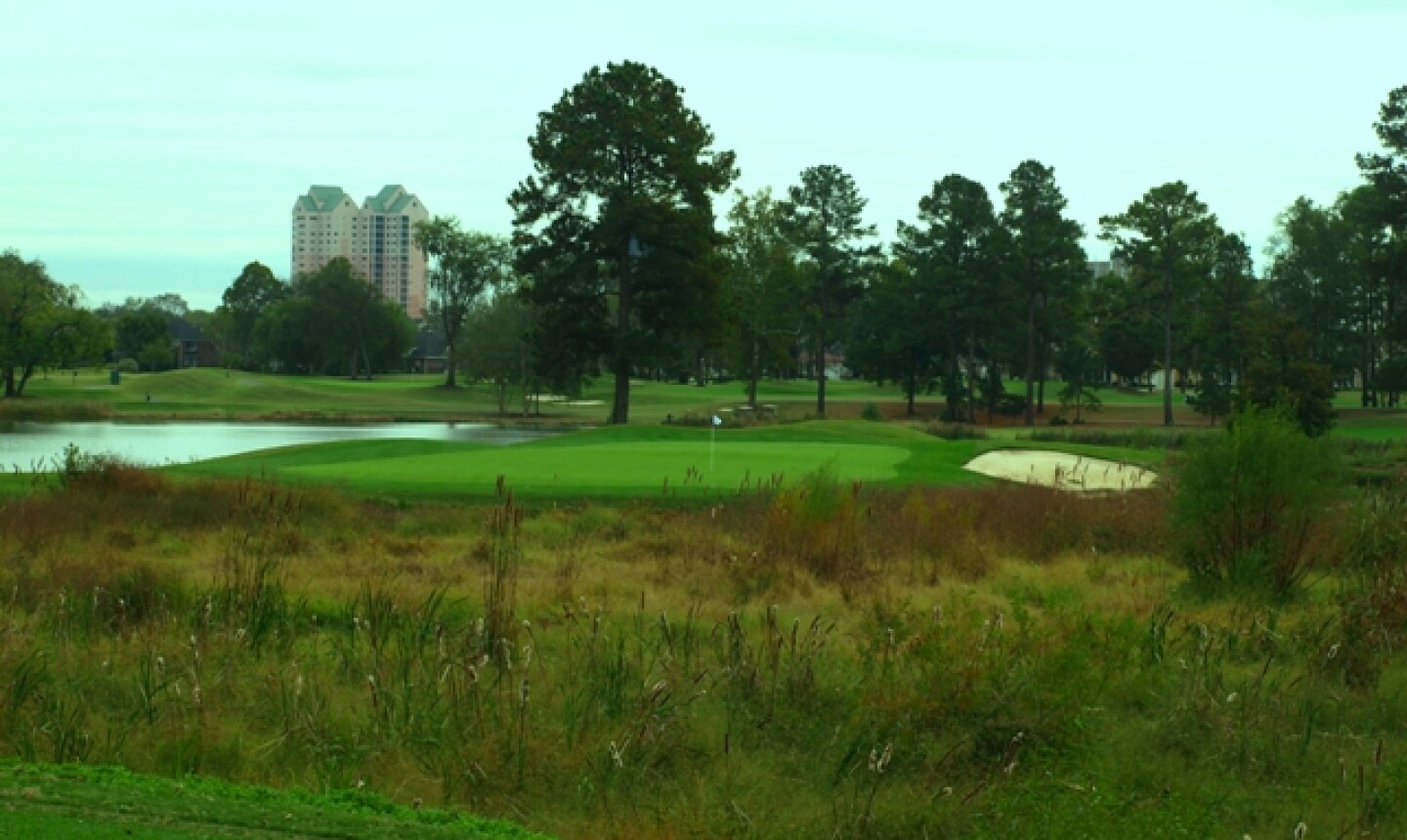 The 17th hole at The River Golf Club is a short par 3, but it's treacherous. Mike Bailey/Golf Advisor 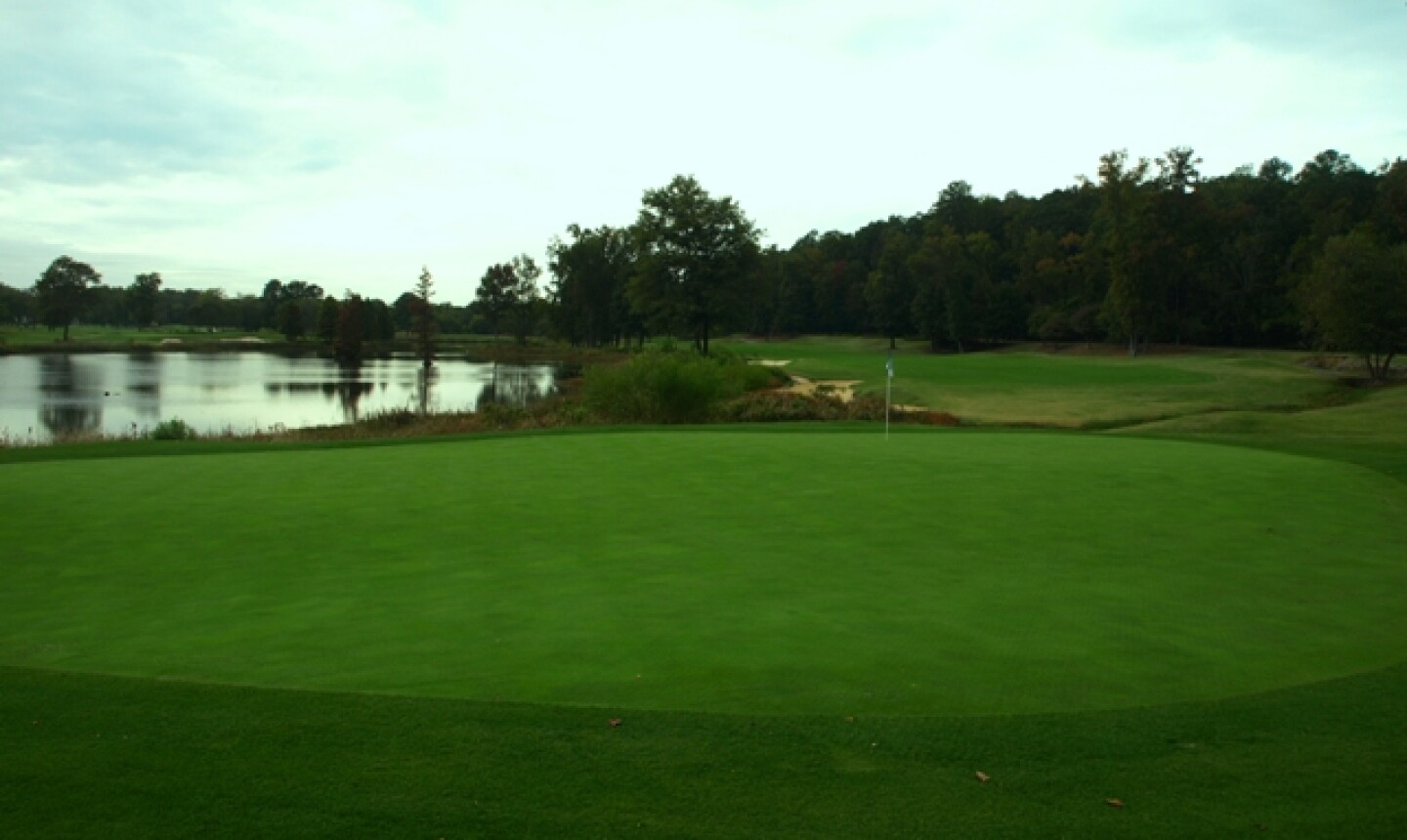 The par-5 18th hole at The River Golf Club plays more than 600 yards from the tips, and there's plenty of water all the way to the green. Mike Bailey/Golf Advisor 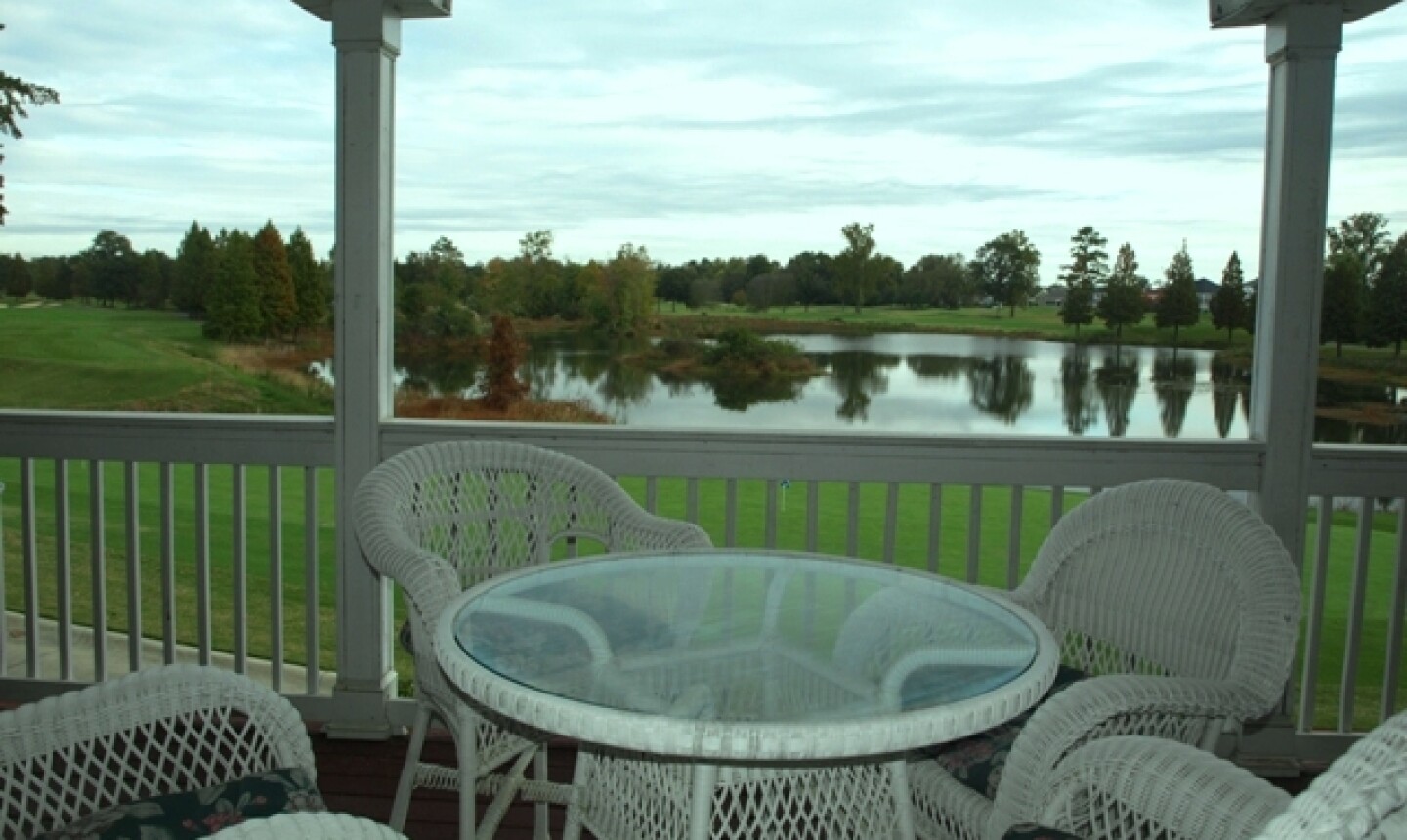 A grand Southern porch at the clubhouse at The River Golf Club affords great views of the course and putting green. Mike Bailey/Golf Advisor

NORTH AUGUSTA, S.C. -- The River Golf Club is night and day from Augusta National, but the two have some important similarities, location being chief among them. Just a few miles apart from each other, The River Golf Club is a favorite spot for the patrons who attend the first major of the year and bring their golf clubs.

Another similarity is that both golf courses feature bentgrass greens. And you don't have to squint to see the likeness in Colonial-style clubhouses at both locations. For many, in April, this semi-private golf club is very welcome golf -- especially for those who have made the trip from the North, where golf has been in the deep freeze for a while.

"Masters week is a big deal for us," said Chris Verdery, director of golf at The River Golf Club. "People love the layout. We have a real diamond in the rough here."

Opened in 1998, the Jim Fazio-designed River Club is set along the banks of the Savannah River. From its fairways, downtown Augusta, Ga., is visible just a few miles away. Although it's in another state, the course is just minutes away from the famous Masters venue.

Of course, you'll want to book your tee times as far in advance as possible at The River Golf Club if you're planning to play there during Masters week. There are a lot of golfers in town that week, and almost all of them want to hit the links.

During the other 51 weeks of the year, tee times are a little easier to get.

Unlike Augusta National, The River Golf Club is relatively flat. Instead of massive hills, there are wetlands, streams, ponds and lakes. Water comes into play on half the holes, and the bentgrass greens are large and subtle.

"It has more of a coastal feel to it than your typical Augusta course," Verdery said.

Indeed, coastal-type wetlands come into play early and often. On the par-4 third hole, for example, golfers must carry a sizeable portion of wetlands to find the fairway. And on several holes on the front nine, there are bridges that carry players over water to fairways and greens. And then there's the short par-3 17th, surrounded by wetlands and water -- a real knee-knocker if you've got something on the line.

On the last holes of each nine, water really comes into play. The ninth is a short par 5 with lakes on the left and the right, with the latter coming into play around the green. A strong tee shot sets up a risk-reward opportunity to hit the green in two, but anything right will likely be in the hazard.

The par-5 18th is generally not reachable in two, playing more than 600 yards from the tips. The dogleg right follows a lake down the entire right side, and there are several large fairway bunkers in the mix as well.

The River Golf Club: The verdict

The River Golf Club, which has hosted a Hooters Tour event as well U.S. Open qualifiers, is indeed a terrific playing option for golfers attending the Masters or coming to Augusta any time of year. The golf course is overseeded, so you can expect outstanding playing conditions in the winter and certainly in April. At 6,847 yards, the par-71 course has a nice variety of scenic holes and presents a good challenge.

The clubhouse is also very inviting. From the veranda, golfers can sip on a cool drink and watch players play the ninth hole or just take in the scenery. Or they can retreat to the grill for a beverage and burger. The clubhouse also includes two meeting rooms as well as a banquet hall.

The River Golf Club also has excellent practice facilities, which include a grass range, putting green and extensive short-game area. Lessons are available from the professional staff.

Stay and play at The River Golf Club

For those wishing to stay overnight at the course, The River Golf Club has terrific accommodations. The cottages on the property, right along the 18th hole, are comparable to the finest resorts in the Southeast, and they won't cost you and arm and a leg (any week but Masters week).

Two of the cottages have four bedrooms -- each with private baths -- and one cottage has eight bedrooms. They also include high-speed Internet, washer/dryer, kitchen and living room. Prices, which vary by season, are per player and include golf. 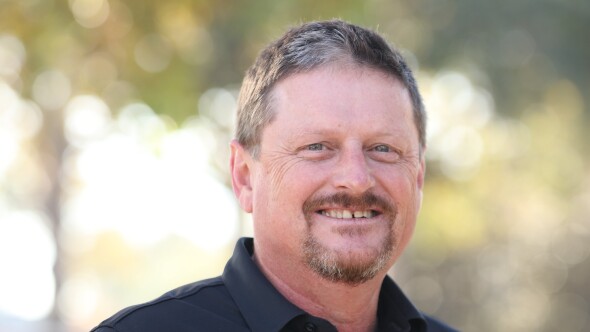 Mike Bailey
Mike Bailey is a senior staff writer based in Houston. Focusing primarily on golf in the United States, Canada, the Caribbean and Latin America with an occasional trip to Europe and beyond, he contributes course reviews, travel stories and features as well as the occasional equipment review. An award-winning writer and past president of Texas Golf Writers Association, he has more than 25 years in the golf industry. Before accepting his current position in 2008, he was on staff at PGA Magazine, The Golfweek Group and AvidGolfer Magazine. Follow Mike on Twitter at @MikeBaileyGA and Instagram at @MikeStefanBailey.
More from the author