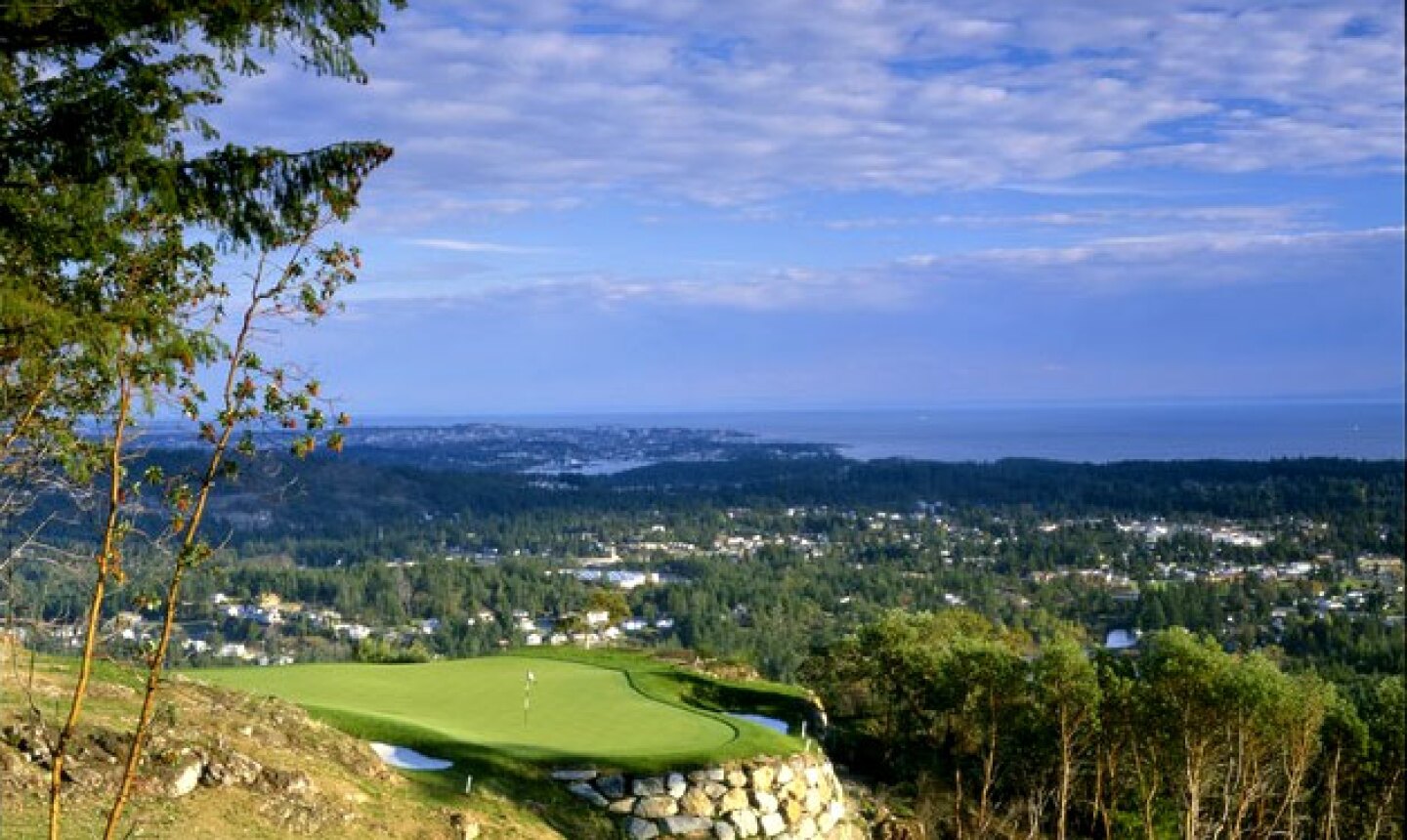 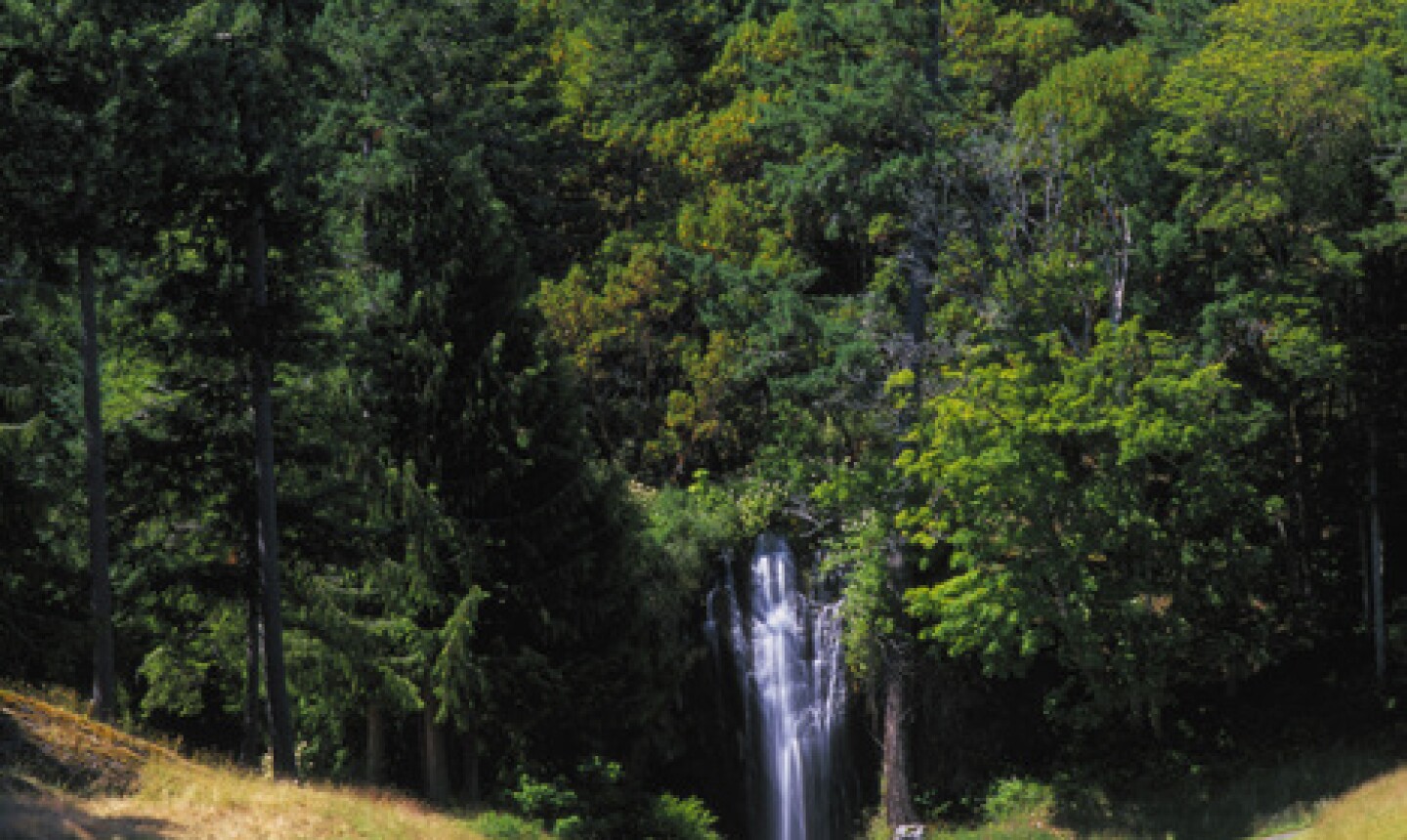 The par-4 17th at Olympic View Golf Club wows players with a waterfall right behind the green. Courtesy Olympic View

For most people, swaying palms and umbrella-garnished cocktails complete the picture. But substitute soaring pines and evergreens and British Columbia wines and Vancouver Island is as much a blissful getaway as any tropical paradise.

For golfers, there's no better way to discover this temperate Pacific island than the Vancouver Island Golf Trail. The 10-course itinerary (soon to be 12) gives you the gamut - mountain landscapes to ocean views, world-class designs to low-profile finds - with almost all green fees under $75.

The relative difficulty of getting here (by small plane or two-plus-hour ferry from Seattle or Vancouver) and the island's length - 460 kilometers - can make the trail seem a bit remote and sprawling. But it's well worth the effort and will only get more so as high-profile new courses come on line.

The best way to tackle all or part is to divide it into four quadrants - Victoria, the Cowichan Valley, up-island and North Island, each about an hour apart from the others.

The most popular weekend package on the trail is the trio of Victoria-area courses, highlighted by Jack and Steve Nicklaus' Bear Mountain Golf & Country Club, a 7,083-yard monster with cavernous bunkers and wetlands hazards fronting many its massive greens. A second track is due to be finished next year.

The other two courses are both Bill Robinson designs, but they couldn't be more different.

Olympic View Golf Club winds 6,534 yards through rolling terrain, peaking at the par-4 17th, with its 60-foot waterfall behind the green making for one of the most picturesque targets in golf.

The 6,168-yard, par-70 Arbutus Ridge Golf & Country Club seems a bit wedged in among the surrounding homes, but there are highlights here, especially the peninsula green at the par-3 17th and the arduous, uphill par-4 18th.

Finding a home base in British Columbia's capital won't be hard; choosing one will be. The Delta Ocean Pointe Resort & Spa and the Victoria Regent Hotel are good options downtown. The Westin Bear Mountain, opened in May 2006 hard by the namesake golf club, is about 20 minutes from central Victoria.

Two trail courses lie in the rural Cowichan Valley about 45 minutes north of Victoria on the island's eastern shore, with a third under construction.

Cowichan Golf & Country Club in Duncan is the easiest course on the trail, running 6,189 yards with a 118 slope rating. The 6,616-yard Duncan Meadows mixes links-like and parkland holes.

The Cliffs Over Maple Bay, a 6,891-yard Greg Norman layout managed by Troon Golf, is slated to open in 2008.

The 7,018-yard Morningstar International Golf Course, host to the Canadian Tour Qualifying School and the 2007 B.C. Amateur, will challenge the best players in your group.

Pheasant Glen is a property in transition. New owners completely redesigned the back nine of the former Glengarry Golf Links, and a new clubhouse, accommodations, spa, fitness center and pool are in the works. The respected Brent Morrison Golf Academy attracts junior players from around the world.

But the most memorable part of an up-island visit is a stay at the beautiful Tigh-Na-Mara Seaside Spa Resort in Parksville near Morningstar. Its natural setting feels like a scout camp, with fun for all ages. All 192 units spread among the resort's 22 acres are hand-built with real fir and cedar logs.

The resort's beach is secluded and scenic. The Grotto Spa, the largest resort spa in British Columbia, houses a hot tub and a 2,500-square-foot mineral bath, fed by a two-story waterfall. A $1 million pool/recreation facility is on tap.

Those who stretch their trip to the northern tip of the trail will find two Golf Digest four-star courses, Storey Creek Golf Club just south of the seaside town of Campbell River and Crown Isle Resort & Golf Community in Courtenay. Crown Isle's fairway villas are a good place to rest your head.

Island dining relies on an abundance of fresh seafood, and you can find quality across the board. Even the clubhouses of Arbutus Ridge and Olympic View boast chefs who can rival those at full-service restaurants.

In Victoria, the LURE Seafood Restaurant & Bar at the Delta Ocean Pointe looks across the harbor through floor-to-ceiling windows and offers seafood as good as the view.

Panache at the Westin Bear Mountain serves steak and prime rib, but there's a tasty surprise on its menu: a side plate of macaroni and cheese. Yes, it's true: mac 'n' cheese at a 5-star joint.

Vancouver Island is the largest island off the west coast of North America.