Previously known as The Georgetown Club.

I will never play this course again. There was a threesome behind our foursome that thought we were playing too slow on the front 9 and literally called the ranger. Correct me if I am wrong but a 2 hour front 9 is a decent pace of play especially if you need to fix 4 or 5 pitch marks that are on your line on every green. He could have said that we were a bit behind (which we were not) and politely asked us to pick up the pace. He did not. He was very rude about it and it put our entire group in a bad place which does not make for a good round of golf. So much so that two of our group quit after 9. Two of the players behind us only played 9 so the third joined us on the tenth while we were waiting for the group in front of us to get out of range and he was lovely. A group behind us caught up and started hitting into us on every hole. After the third time we asked them to please stop or we would have to report them. They did not apologize and not do it again, they gave us attitude and did it again on the 18th (par 5 that I hit in two so yay for that). We finished 18 in less than for hours so we were in no way under pace. The course was fine as a track but beat to up by the players there. I have played cheaper courses in much better shape this season. The rudeness and disrespect for the course and other players by both the staff and the players there guarantee we will never play there again.

This place has gone downhill over the last two years. Better yet, fell off a cliff! Staff is awful and the green went from some of the best in the area, to the worst I played this year. PUTTING GREENS SHOULDNT LOOK LIKE THE SURFACE OF THE MOON!!!!

I play most of my golf here, mostly during the week. The middle of the summer there are several rangers on the course, that keep play moving. Played there today, no starter or ranger on the whole course. While playing 14 I caught up to a threesome, of older women. I completed 14 and made to the 15th tee, before they teed off. Instead of allowing me to play through, they proceed to each hit 3-4 shots, to where could still fly the ball over them. After 15 minutes I walked to the next hole. When I complained to the gentleman in the clubhouse, he didn’t seem to care and asked me “what do you want me to do about it”. No apology, just an attitude about be under staff. I hope he was just having a bad day. Most of the staff are great, but it only takes one.

SL8eocIn1uqELjgQqBpo
Played On 08/13/2019
Reviews 1
Skill Intermediate
Plays Once a week
I Recommend This Course
5.0
Previously Played

The course is in great shape and the Pro Shop staff, starter and rangers were all very friendly. Ball marks on some greens were not repaired by prior players, not sure why players would not repair their ball marks. The course layout is challenging and it is best to seek advice from the starter before getting into the round. A few tips on the first four holes was very helpful. Great experience and will be back as often as time allows.

The starters and rangers at this course are beyond rude. Today we played in the rain with nobody behind us. We were playing the tips and all hit bad first drives. One member in our group went to re tee because his ball found the water(instead of dropping one)’and the starter tells us we aren’t allowed to hit a second ball because it’s from the black tees. Mind you, NOBODY is behind us and the golfer is re teeing instead of taking a drop. I laughed thinking he was kidding but he kept a stone face on and repeated what he said. We then went up and played a drop ball. Nobody was behind us or even on the putting green at that time. All golfers in the group are good players and have great etiquette. I was so amped up from this guy that it took 4 holes to relax again. We’ve played here numerous times because the course is nice. But this isn’t the first time we’ve dealt with that for a starter. Tough to want to go back.

While you will enjoy the layout at Black Swan be aware: They have a serious lack of customer services and friendliness at this course. If you are not a "member" you will be MADE to purchase and ride before 12 noon on the weekends. (which they say is to quicken pace- a lie.) and you will be overly Marshalled even when you are not out of position. You can tell they are going through tough times because they need to squeeze as many people on the course as possible. You have better choices farther up 95 in the Portsmouth NH area- god forbid you go to the even worse Far Corners Zoo up the street. So while the course in enjoyable- beware of the nasty attitudes of the staff (the starters are very nice btw the only exception. The golf shop and marshalls are NOT what customer services is all about. The Head pro, when contacted said "Hey I just work here?" WOW....

Never been treated like the way the ranger treated us on the golf course. We started out in the fog for the first 6 holes. We finally were able to see once we hit 7 and were pushed to catchup to the twosome ahead of us which wasn’t possible as it was Cart path only and they had push carts. Was asked five times to pick up pace while group behind us never caught up to us. Was berrated by very unprofessional ranger after trying to find tee shot. Will never go back here.

Very good course, but you need to bring your own food-bag. Pro shop is small and has a single small "cold drinks" cooler and no food. The restaurant is a Flat Breads Pizza that has no sandwiches, and only some fat oily hot-dogs in a rolling cooker. Had a dog at the turn at 2:30 and it was essentially RAW. I mean COME ON FOLKS! You have a nice course and no food for your golfers???? The cart-girl finally found us for the first time on number 14. Just plain uncalled for here.

This course is first class all the way!! Very unique course that is in fantastic shape. #2 is a par 5 with a split fairway that I wasn't aware was split. Played the right side of fairway over a marsh but now know the play was to left side. This course has a lot of carries over marsh and wetlands. Can be tough for ur first visit or women players. Played slow for us due to group ahead playing back tees when a forward tee choice would have been better for them. Greens ,fairways, boxes and bunkers all in great shape except for fact that golfers were not fixing pitch marks. #15 plays tough. Dogleg right over wetlands to a small green with a big collection area right. I actually hit fairway left side and put a 4 iron on the green for a birdie putt. (Missed) Great bar, snack bar and patio area. Starter and guys in pro shop all friendly and helpful. Great par 5 to end ur round before you have a cold beverage!! Must play!!!

This course keeps on getting better and better under the new ownership. It is a semi-private club, but there are ample times for the public to play. I enjoy playing in the late afternoon after the crush of play has subsided, The course is always in good condition with some of the best greens the public can play on on the North Shore. Even though the volume of play has increased the number of ball marks and divots, the place is still way ahead of most. The new owner and managers are a huge upgrade over the former owner, "Dr. Evil" and his minions. The large number of environmentally protected wetlands create several odd hazards that take some time to figure out when to lay up and when to go for it. A great example is the par 5 second hole, with a large marsh 230 yards off the tee, then a split fairway with a hazard down the middle. You choose the left or right fairway based on where your laid up tee shot is. It is quite unique. On the back 9, the 15th is a bear of a par 4. You must clear a hazard and land on the left side of the fairway, which will kick right. If you hit it down the right side, it will kick into the marsh. The shot to the green demands precision as well with a large collection area to the right. This course requires a few rounds in order to acquire the local knowledge necessary to successfully navigate it. After a round, be sure to go to Holloway's which is their 19th hole. They have excellent thin crust pizzas and sandwiches, made in their state of the art oven. They may have up to a dozen beers on tap and there is a very cool patio with fire tables. This is about the best public access, 18 hole course on the North Shore. I think it is well worth checking out. 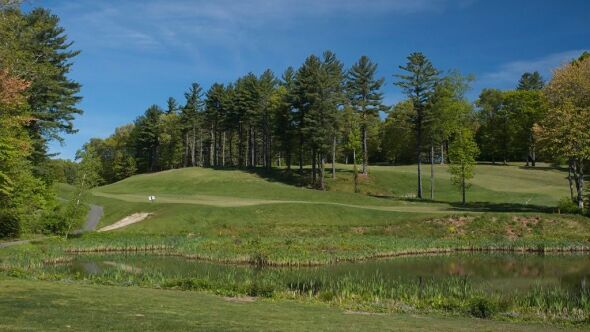 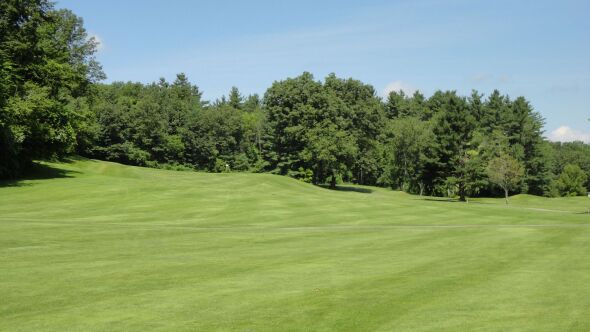 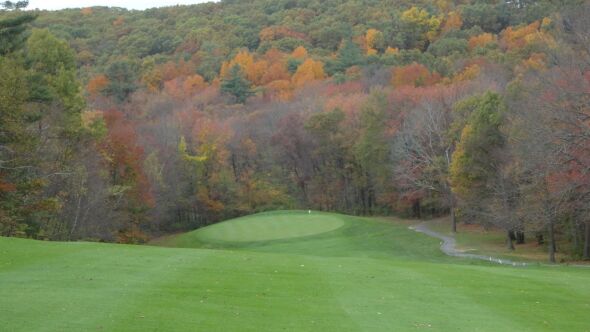 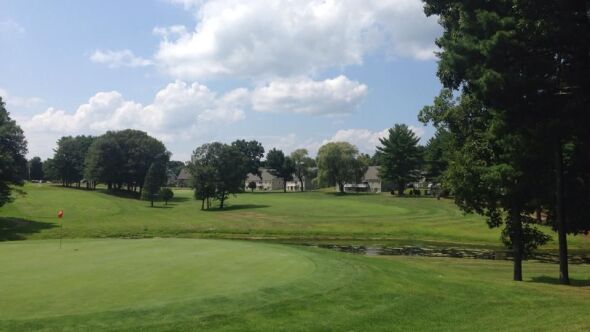 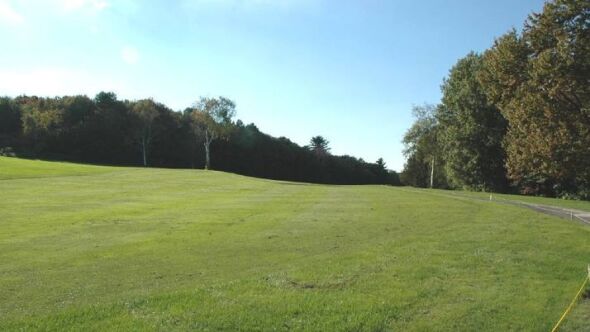 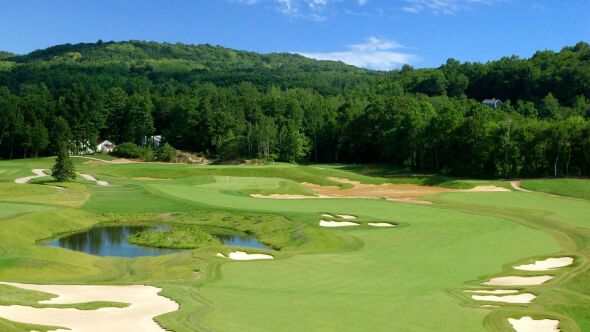 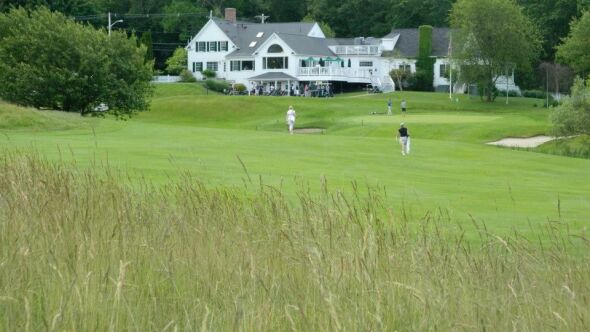 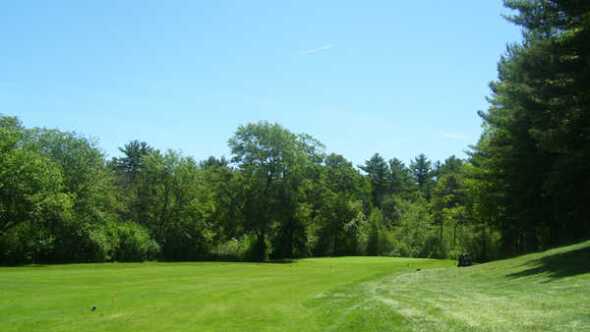 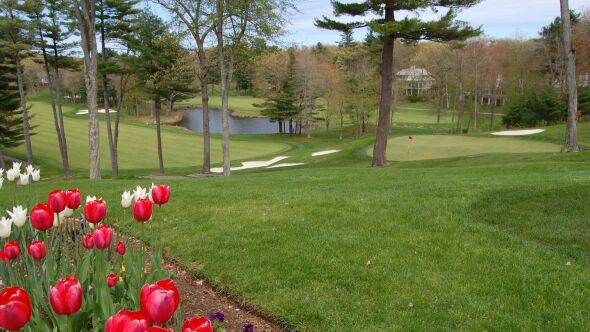 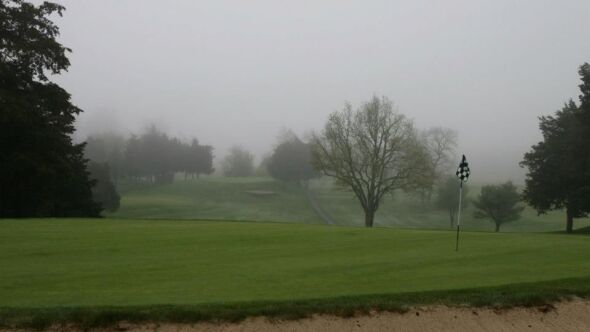 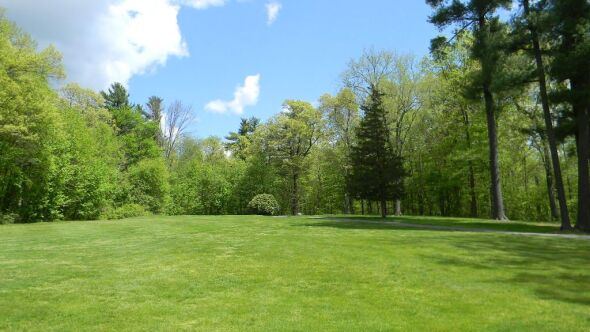 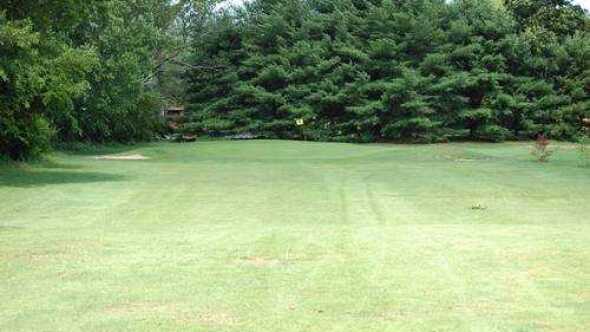 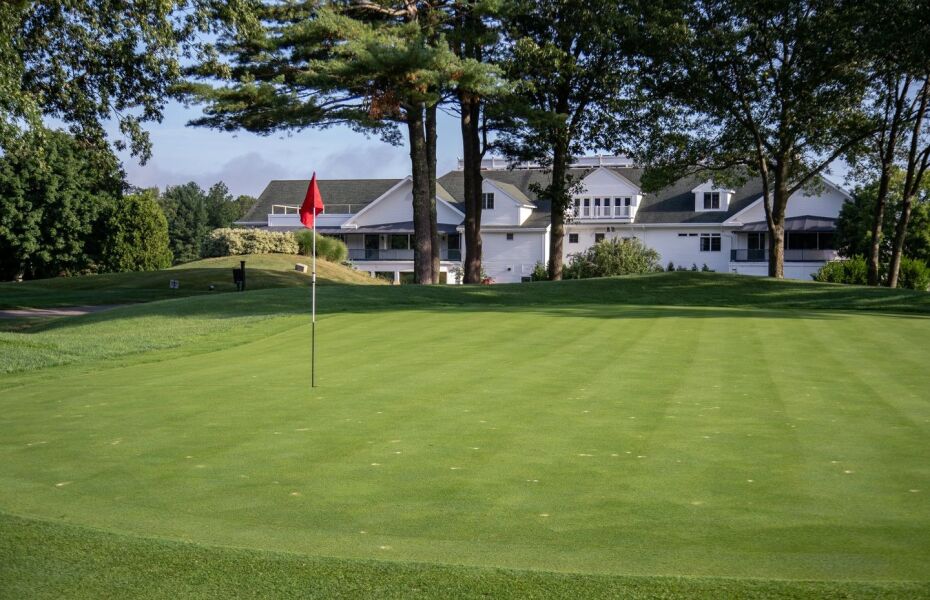 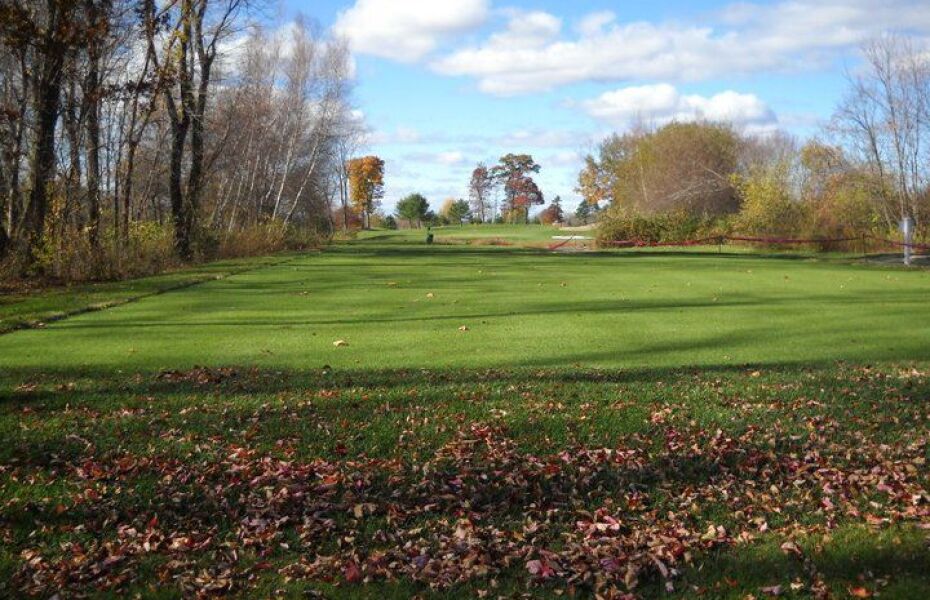 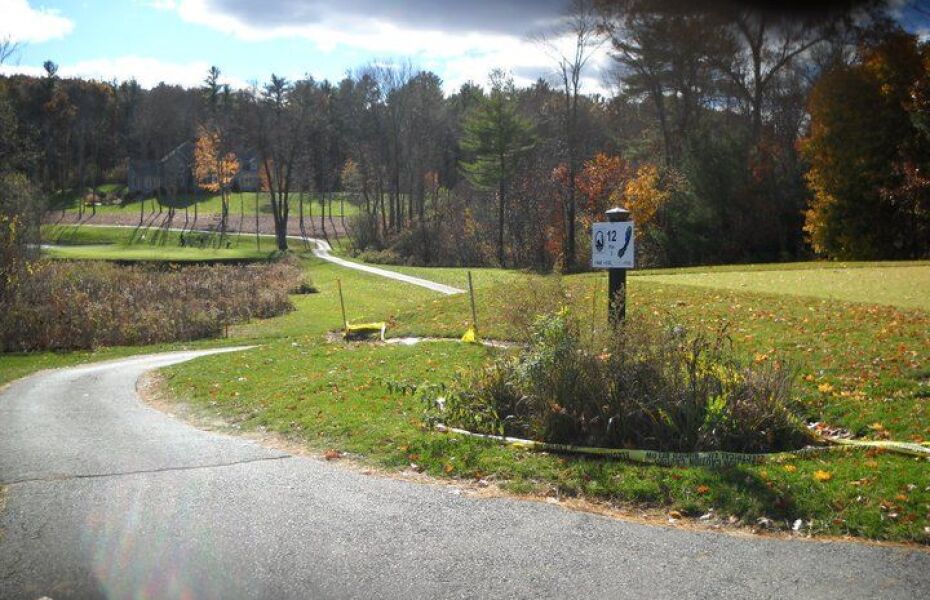 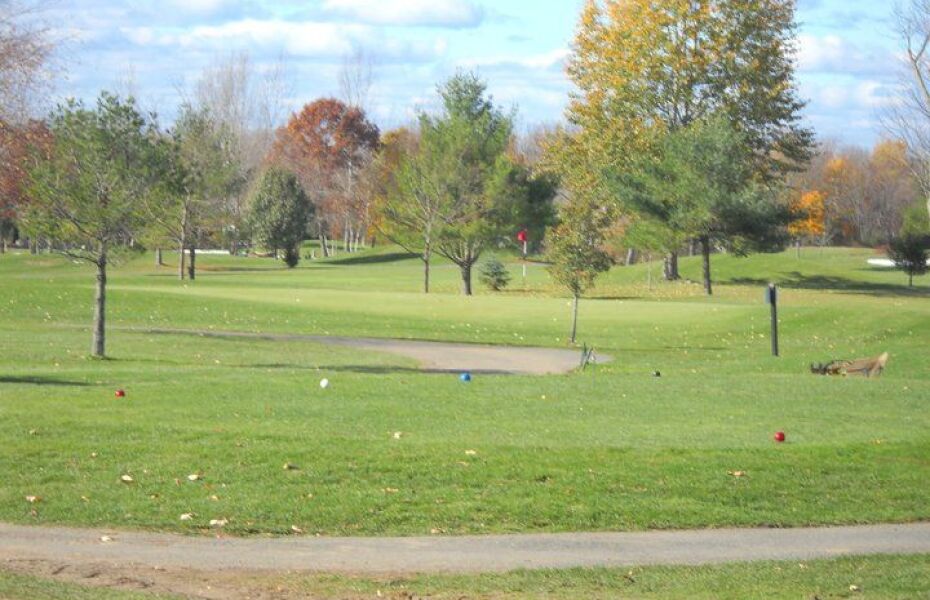