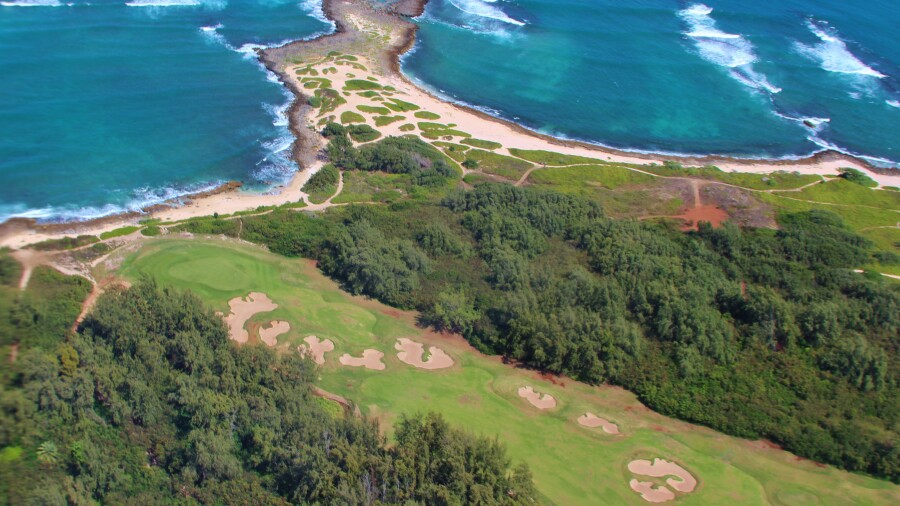 0 of 9
Turtle Bay - Palmer golf course - 17th
Check out the bird's-eye view from a helicopter of the 17th hole on the Palmer Course at Turtle Bay Resort. Jason Scott Deegan/Golf Advisor 3 of 9
Turtle Bay - Palmer golf course - 7th
When the tradewinds are blowing, this pond in front of the seventh green is in play on both the drive and approach shot on the Palmer Course at Turtle Bay Resort. Jason Scott Deegan/Golf Advisor 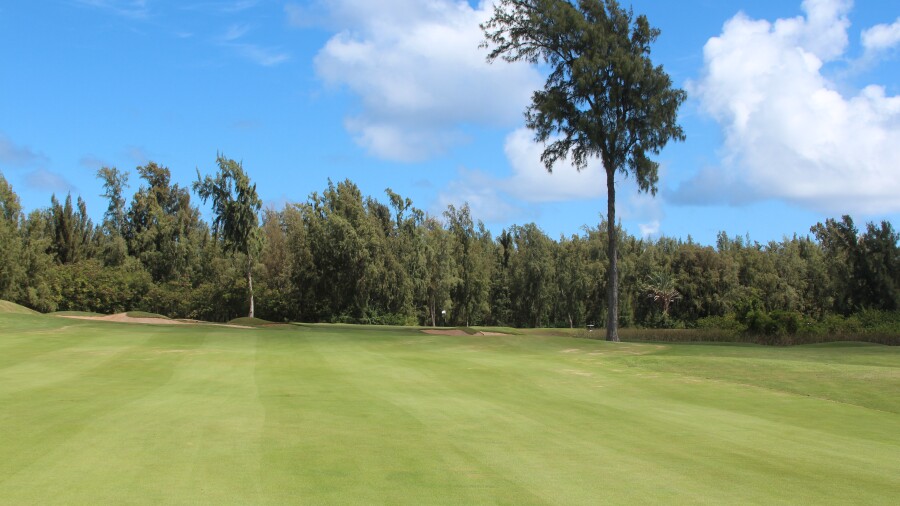 5 of 9
Turtle Bay Resort - Palmer G.C. - 10th
The view doesn't show it, but the water along the right side creeps toward the 10th green of the Palmer Course at Turtle Bay Resort. Jason Scott Deegan/Golf Advisor 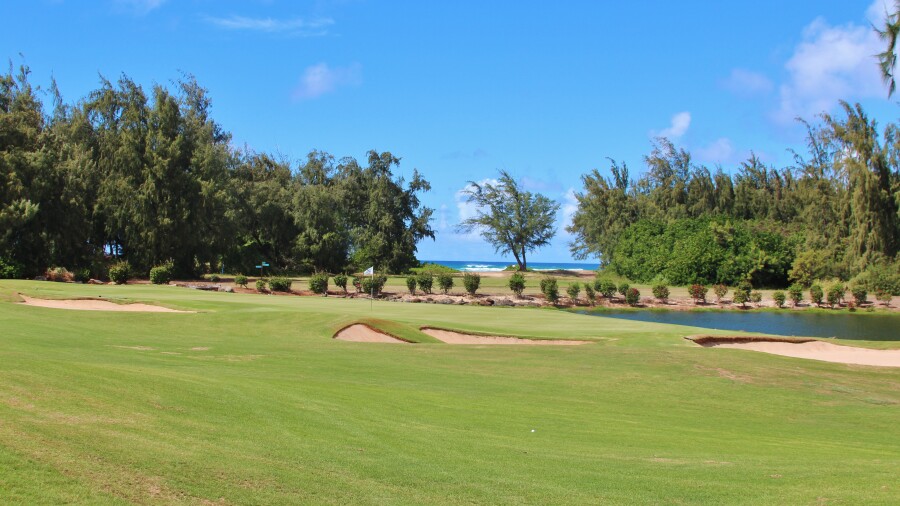 7 of 9
Turtle Bay Resort - Palmer G.C. - 18th
Although the pond is the water you have to worry about, the glimpse of the ocean is what you'll remember on the 18th hole of the Palmer Course at Turtle Bay Resort. Jason Scott Deegan/Golf Advisor 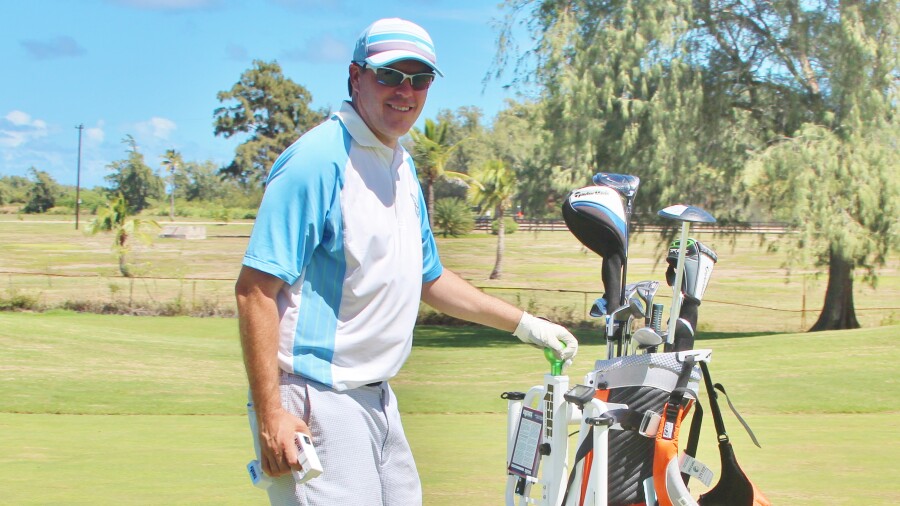 OAHU, Hawaii -- Golf isn't the no. 1 sport on the North Shore -- that would be surfing -- but it's a close second thanks to the dynamic Palmer Course at Turtle Bay Resort.

Golfers can ride the wavy green fairways and mounds of the Palmer Course by golf cart or on a Golf Skate Caddy, a new single-person golf transport device that mimics the movements of a surfboard or skateboard.

Architect Arnold Palmer borrowed a chunk of the resort's original George Fazio layout dating to the 1970s to build his 7,218-yard course in 1992. Water intrudes on almost the entire round, which made for great theater whenever the Champions Tour or LPGA Tour would visit for a tournament.

The par-5 third and par-3 fourth holes share a pond. The sixth hole introduces the first of many excellent par 4s that twist around ponds and palm trees. Instead of water on no. 17, players come face to face with a sea of sand. Nine bunkers stack up to guard the ultimate reward, an elevated green with views of the Pacific Ocean. The finishing hole is another great spot for tournament drama, a risk-reward par 5 of 577 yards. Heroic attempts to go for the final green in two can get knocked down by the swirling tradewinds and end up in a pond. Unfortunately, golfers can't walk on water like surfers do. 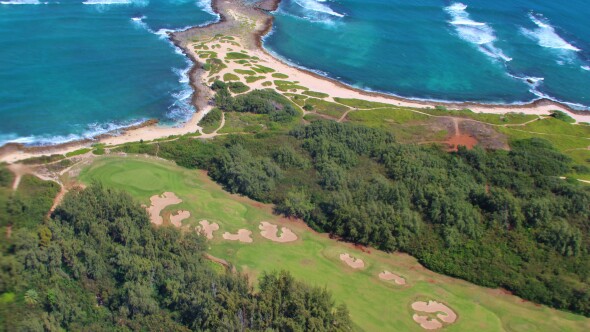 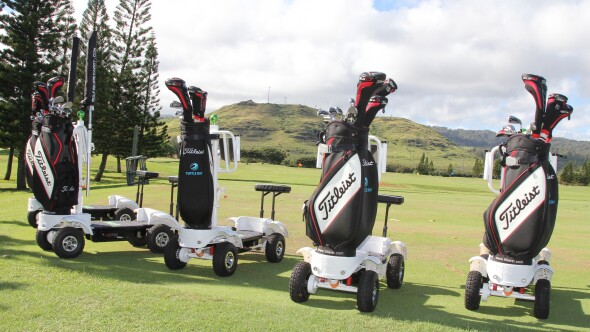 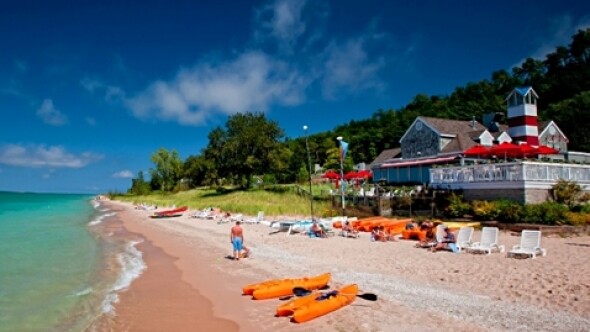 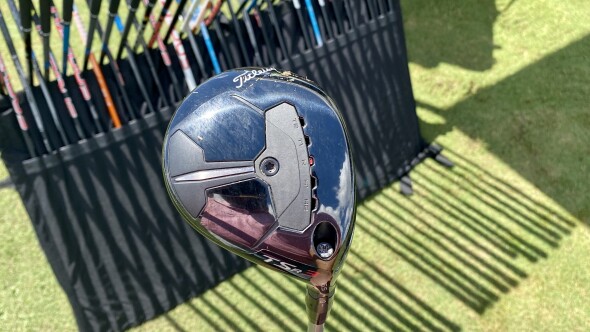