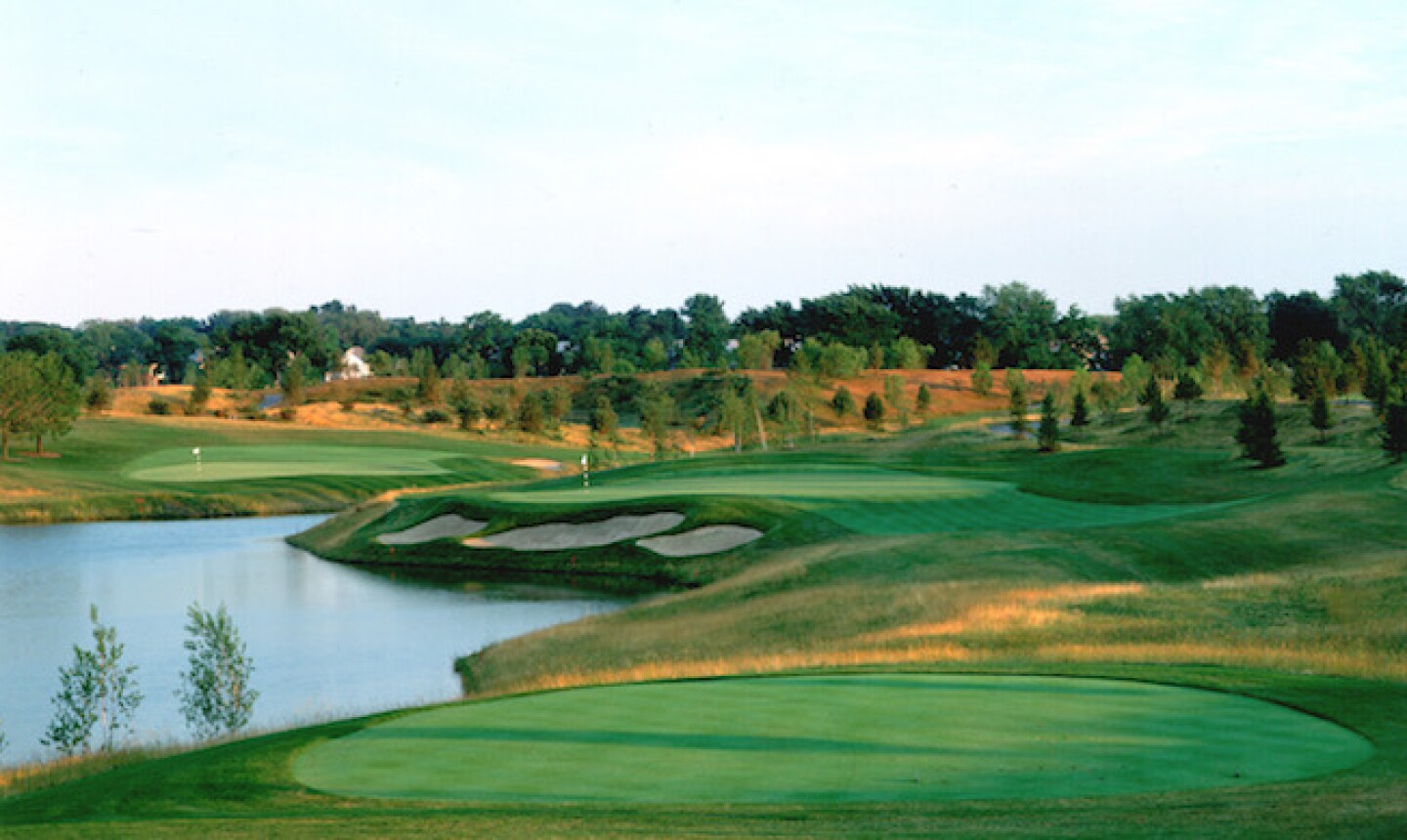 The Glen Club is a Tom Fazio design in a peaceful suburban Chicago setting. (KemperSports)

Being a baseball fan (let's go Mets!), one trip that I'm dying to take one of these summers is a road trip across the United States to combine great golf with baseball games in as many Major League stadiums as possible.

I know I'm not alone in my baseball/golf hybrid fandom, so if you're thinking of hitting the road, hitting the links and hitting up some of the great ballparks this summer or in the near future, here are some more under-the-radar suggestions for where you should tee it up near the Major Leagues’ most iconic parks, from east to west.

Boston is home to some of the most stunning recent improvements to the American municipal golf scene, with both George Wright Golf Course and the #1 course at Ponkapoag Golf Course being restored to their Donald Ross roots. On the higher-end side, we recommend Granite Links for its commanding views of the Beantown skyline.

The greater New York City area is home to dozens of phenomenal private clubs, as well as a number of excellent playable courses. For the Bronx bombers, we suggest either Pelham Bay and Split Rock or Trump National Golf Links, Ferry Point. Pelham and Split Rock are two classic, municipal courses that are a lot of fun to play. The latter is a Wayne Stiles/John Van Kleek classic with an excellent, fun set of greens. Trump Ferry Point is a Jack Nicklaus/John Sanford layout we've mentioned before, and recommend as a higher-end option.

Closer to Queens and Citi Field, pickings are a little slimmer, or at least tougher to get to, with one glaring exception: Bethpage State Park, home to the famous (or infamous, perhaps) Black Course. But the Black is hardly Bethpage’s only attraction – in fact, many regulars believe the A.W. Tillinghast-designed Red Course to be the best “everyday” layout on property. If you don't mind a bit of a drive, Montauk Downs State Park out past the Hamptons is a Robert Trent Jones, Sr. original that son Rees has updated in recent years.

Ranked by many outlets as the best Major League ballpark. PNC is not to be missed, between its scenic setting where the Monongahela and Allegheny Rivers converge in the center of the Steel City and the intimate layout of the crisp, clean stadium, it is a can't-miss proposition for any baseball fan. Can't-miss golf experiences in the area include Nemacolin Woodlands Resort, whose Pete Dye-designed Mystic Rock Course is scenic, challenging and a lot of fun. It's about 90 minutes from town, though, so if you want something a little closer in, Cranberry Highlands Golf Course, at less than half the distance from PNC Park on the other side of town, gets our high recommendation. It is a municipal course that is known for playing more like a private club with its high standard of conditioning and engaging layout.

2016 is Turner Field’s farewell season before the team moves into its new digs farther out of town in 2017. And if you’re in town to play golf and see the Braves, Reynolds Lake Oconee is the premier large-resort choice. Though it is a little over an hour away, you will have your pick of five excellent courses, highlighted by the Jack Nicklaus-designed Great Waters and the Rees Jones-designed Oconee layout.

Closer in, private layouts like Peachtree and Atlanta Athletic Club tend to overshadow the public offerings, but if you like the courses of Jack Nicklaus, you can get a taste of his greatest hits at Bear’s Best Atlanta in Suwanee. The move to a new stadium benefits fans of Cobblestone Golf Course in the nearby suburb of Acworth.

Cubs fans are more hopeful than usual about their team's World Series prospects, with half the city is hoping the 108-year World Series drought will finally be broken. As for golf on the North Side, you have a couple options. On the high end, The Glen Club, about 45 minutes away from Wrigley, is an excellent Tom Fazio course that is open to guests of the adjacent hotel. Standalone green fees top out at $160, but the club is currently running a weekday offer for two days of unlimited golf with cart and one night in the hotel for $300, through June 16.

If you're seeking more convenience and a less fussy golf experience, you might enjoy a romp around Robert A. Black Golf Course, a nine-holer that dates back to 1910 and is part of the Chicago Park District's system of courses. Walking rates top out at $18 for nine holes, and you can cruise around the course on a GolfBoard if you prefer.

The South Side ball club's positive start to the 2016 season has been overshadowed by the Cubs' strong start, but the White Sox are not to be overlooked. Take in a game (or two) at US Cellular and play your golf at Harborside International Golf Center, which has two expansive courses where wind, rather than trees, plays a primary factor. You can also take your own version of batting practice at Harborside's massive, 57-acre practice facility.

You can expect to see some offense whenever you watch the Rockies play at Coors Field - baseballs scream out of the park at a high rate due to the mile-high elevation. That fact makes golf a lot of fun as well, as you can expect a good 15-20% more distance on most every shot. To take advantage, hit up CommonGround Golf Course, a Tom Doak original and one of the country's best municipal layouts. You can even help give back to the local community by taking a middle school-aged trainee caddie for your round - a tradition that has died off in recent years at other courses but is alive and well at CommonGround. And as lovers of the sometimes bizarre but always intriguing work of Jim Engh, we would be remiss not to recommend you seek out Fossil Trace Golf Club just west of town in the suburb of Golden.

Petco Park is the anti-Coors Field: its spacious dimensions give way to a lot of pitchers' duels. It is also the only Major League park to have actually turned itself into a golf "course," albeit briefly. If you want the real thing, the South Course at Torrey Pines Golf Course is the obvious choice, but you may get shut out this summer, as its sister North Course is closed for some long-overdue renovations. Instead, head out to Coronado Golf Course to enjoy the layout with five holes on the San Diego Bay.

If you want to go high-end and treat yourself, then stay just north of town at the Fairmont Grand Del Mar and tee it up at The Grand Golf Club, an immaculate Tom Fazio course that is otherwise private.

As windy, cold and forbidding as old Candlestick Park used to be, AT&T Park is a complete revelation and a modern classic Major League Ballpark. The garlic french fries from Gordon Biersch Brewery are an essential part of the experience. As far as essential golf goes, we like TPC Harding Park fine but find it slightly overrated and overpriced. For some spectacular Bay Area scenery, visit Lincoln Park Golf Course - whatever the course may lack in refinement, the environment will more than compensate. Presidio Golf Course just shy of the Golden Gate Bridge in a former military base-turned-National Park, is another great option.

Everyone is familiar by now with Chambers Bay Golf Course, the bold and controversial 2015 U.S. Open host site. It's worth playing, but it's hardly a secret, and what's more, it's more than 40 miles from Safeco. Much closer to the city, we are big fans of the Golf Club at Newcastle, a 36-hole complexes whose Coal Creek and China Creek Courses were both designed by Bob Cupp and supply panoramic views of the Seattle skyline. A charming additional amenity comes in the form of an 18-hole, all-grass putting course called "Rusty Putter." It is perfect for settling any post-round bets.

I know, I know...I didn't include every single Major League city in this piece. That's where you come in. Give us your recommendations for golf near these and other Major League ballparks in the comments section below!

Dan, while agree Stonelick Hills is a great track, it is privately-owned by the man behind the Penn Station East Coast Subs chain.

When taking in a Reds game, make sure you play a great muni called Stonelick Hills.

How could you overlook Van Cortlandt Park in the Bronx, NY when discussing public access courses in the New York City area. This gem can be slow on the weekends, but can be a fast play for an early morning weekday round and is also distinguished as the oldest public course in the country.

You have to forgive these guys. To them, there is no middle America. Its either east coast or west coast that have the best in their mind.

30 minutes from Busch Stadium in St. Louis , Mo. is Annbriar Golf Club in Waterloo Illinois .
•Annbriar has earned a 4½-star rating from Golf Digest.
•The course covers 226 acres.
•One million yards of earth was moved in Annbriar’s construction.
•During the summer, 700,000 gallons of water per day are used for irrigation.
•The 5½ miles of cart path required 34,000 yards of concrete.
•There are 115 bunkers and 1005 sprinkler heads on the course.