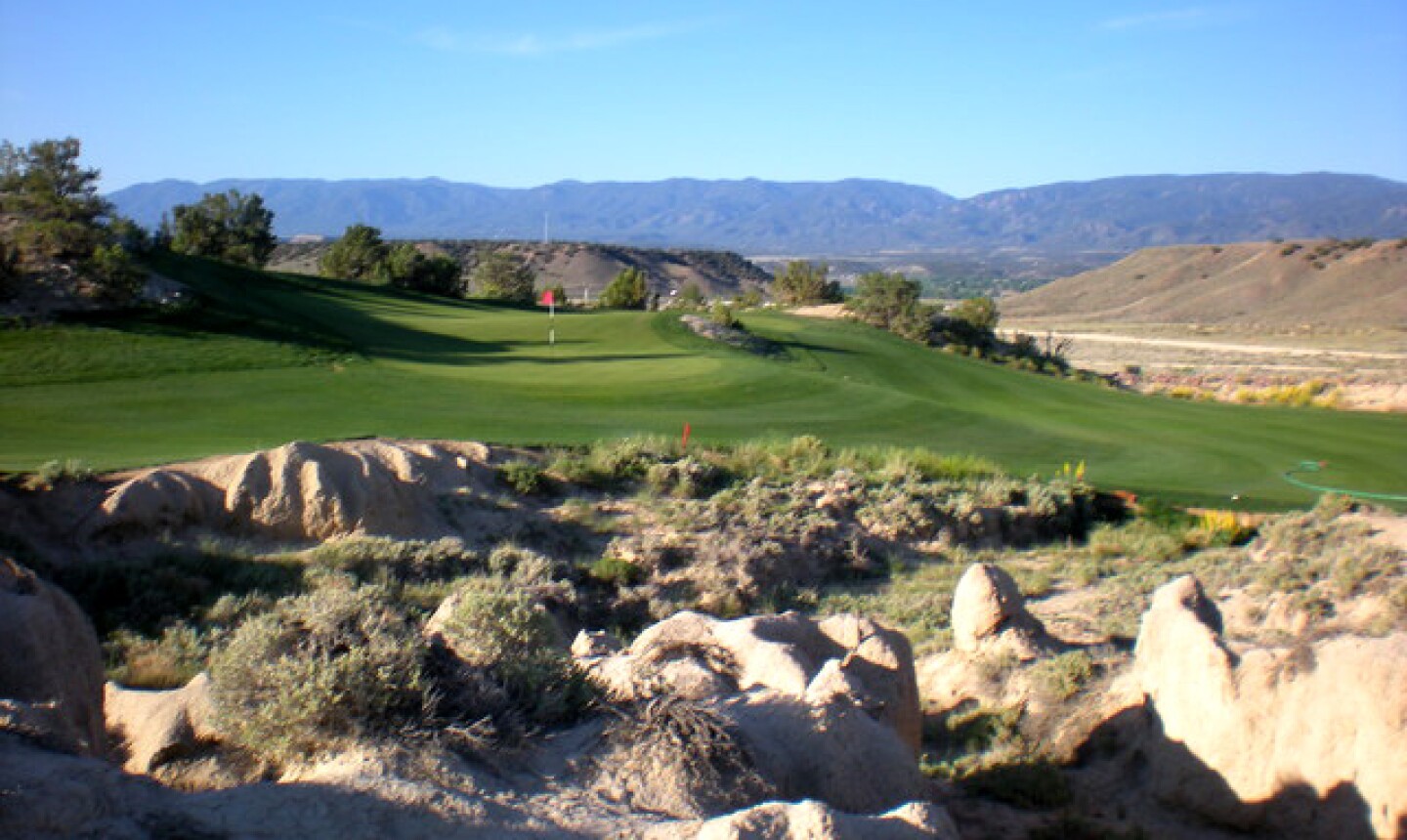 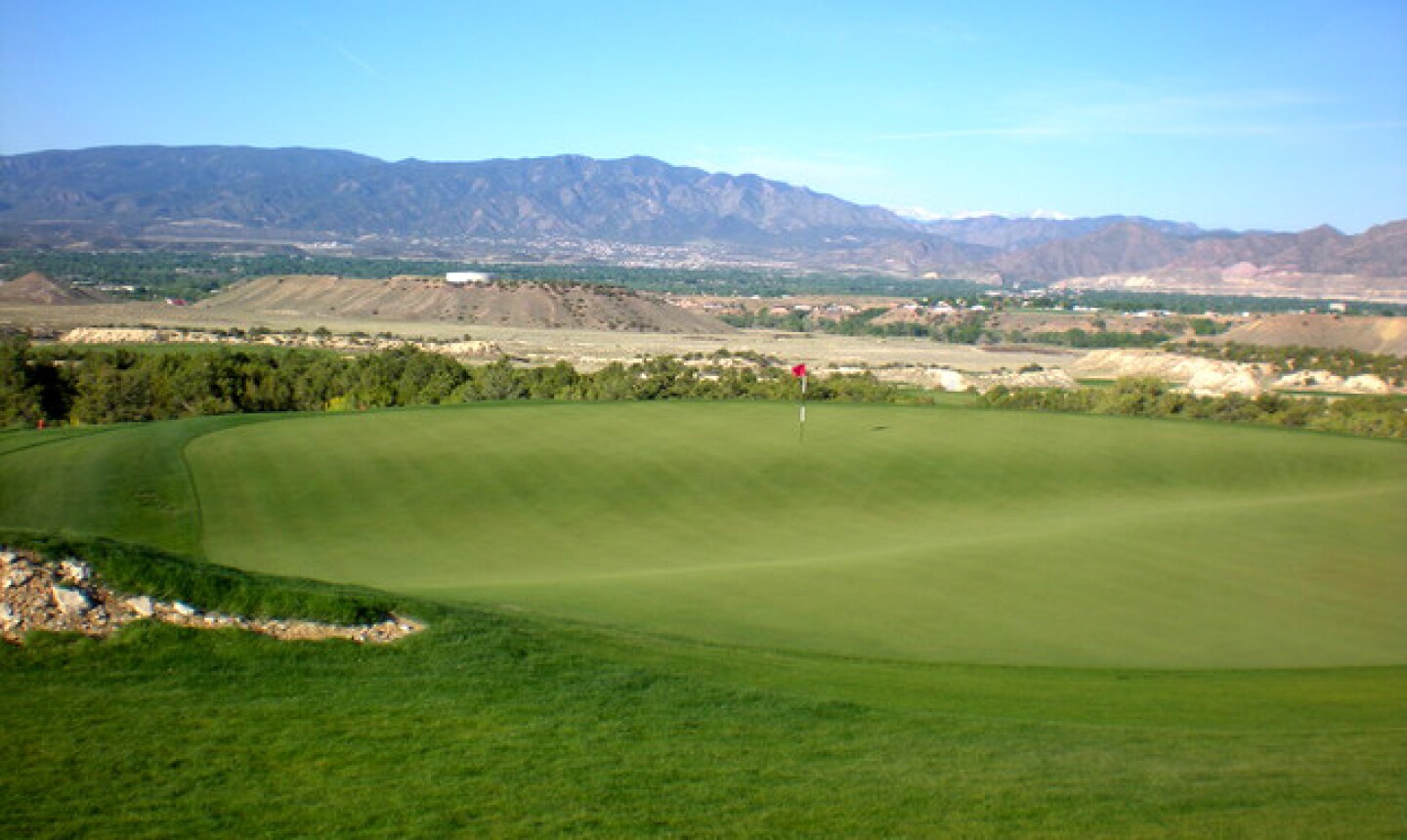 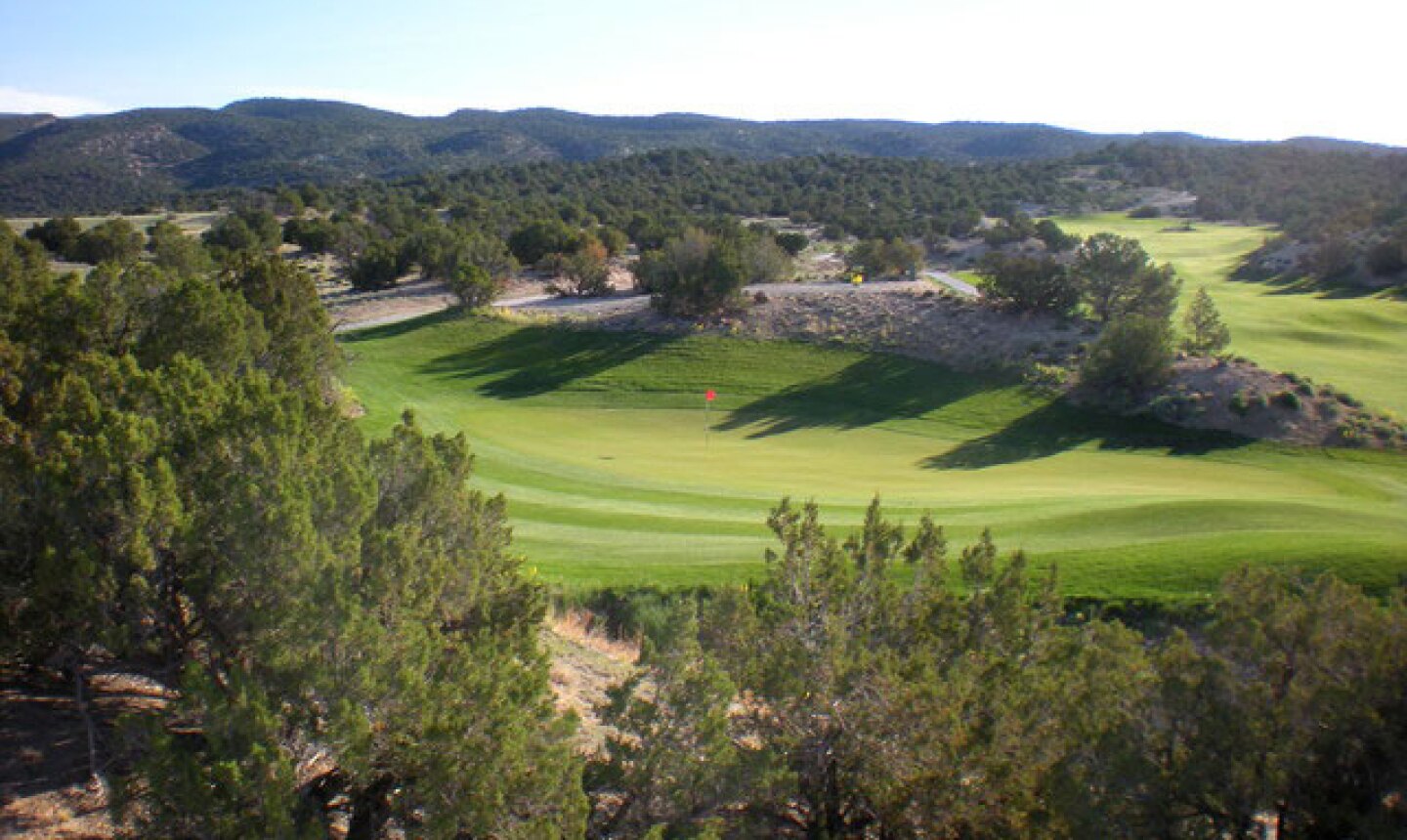 From Mile Ranch's 16th tee you can look back on the 15th green, the culmination of a par-5 journey of 579 yards downhill. The view from the tee box is pure Colorado. David R. Holland/Golf Advisor 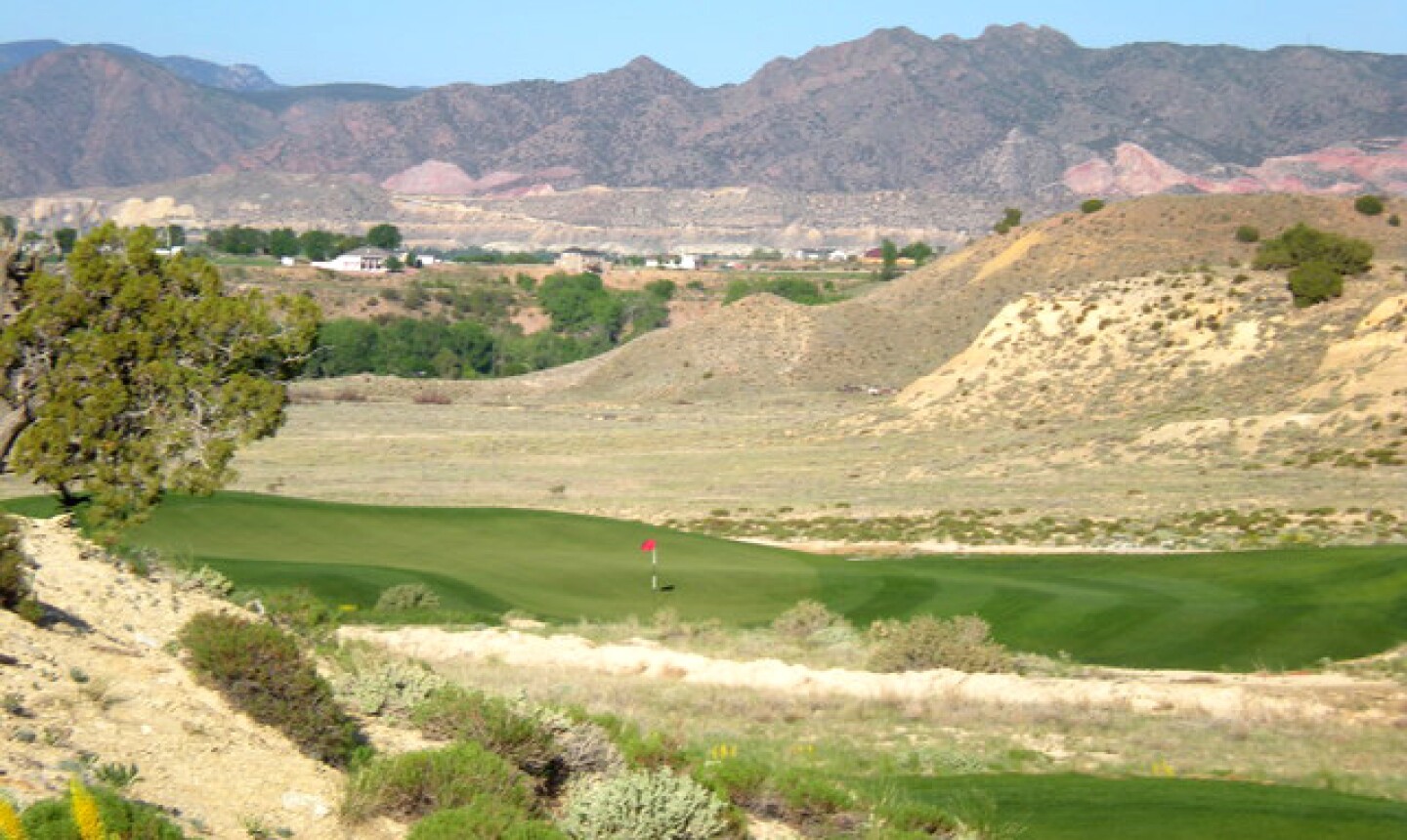 The "shoe bomber," Richard Reid, resides in the Federal Supermax prison in next-door Florence. So does the so-called "unabomber" - Ted Kaczynski.

Hopefully you won't hear any loud booms, except for the sound of titanium driver striking Pro V1x, because the area is home to 10 state and four federal prisons at last count. In fact, someone once said Colorado U.S. Highway 50 cuts through this town like an ax-murderer's blade through soft tissue.

But when traversing Engh's 7,053-yard, par-72 moonscape beauty, the few things that will land you in jail are the natural white-shale hogbacks, some blind shots, undulating greens plus pinons and junipers. Then there are the rumpled fairways that create some atypical lies.

These "hogbacks" are piles of earth that have been seared off by the predominant southerly breeze - appearing as mini-monoliths. The design team left some natural ones and created some of their own.

Bunkers, however, won't bother you. There aren't any. Engh, renowned for squiggly, narrow, muscular bunkers decided the surroundings and setting just wasn't right for sandy traps.

"We looked out over the landscape and because of the hard nature of the angles we decided the jagged hogbacks (ranging from three to 30 feet high) were interesting enough," said the Colorado-based architect.

"Pirouette" is a word Engh uses in this design.

"When I go play golf in Ireland one of my goals is to figure out why I love those courses more than ones in the USA. I have my brain turned on all during the round and I gauge how much I like it by the number of pirouettes I do.

"Everywhere you turn at Four Mile Ranch you see something that interests you," Engh said.

That includes the Sangre de Cristo Mountains in the distance.

Before it folded its tent, Travel+Leisure Golf applauded Four Mile Ranch Golf Club with a 2008 Best New Course listing. Golf Digest placed it No. 4 on its 2008 list of Best New Public Courses. And GOLF Magazine ranked it No. 8 best new public layout in 2008.

An idiosyncratic mishmash - that's a phrase to describe Four Mile Ranch. Engh invented quirky in golf-course architecture and he draws from Irish golf with bowls and blind shots. But it isn't impossible to score well here.

Many purists don't like Engh's designs, but many find them creative. He's an artist, but his green complexes are, well, complex. Deep swales and rolling ridges demand your attention. You have to get as creative as Engh to get the ball close to most pin placements, and you will find yourself studying backstops to throw the ball past the pin hoping for a roll back to the hole.

All in all this is fun golf. Engh could see Lahinch from here - he borrowed its Dell hole, a 217-yard par 3 that only has a directional pole to guide you to a hidden, generous green with curved corners and slopes that sometimes propel wayward shots back to the hole.

Another hole with an aiming pole is the 563-yard, par-5 sixth. This fairway is particularly resplendent with rolls and swales, but it is wide. It is the approach to a hidden green that makes you pay attention. The green is surrounded like a fortress with the semi-arid rocky dirt, but the green is bowl-like causing friendly rolls to the pin.

Then there's No. 12, a 166-yard, par 3 with a reverse-Biarritz green (huge swale dissecting the middle of the green). Love it or hate it you will be thinking before you hit. Four-putters exit the green muttering nastiness. Those who conquer it exit feeling proud.

Perhaps Canon City's major plus is the weather. Known as the "Banana Belt" of Colorado it is normally 10 degrees warmer in winter than other state locations and 10 degrees cooler in the summer.

Bernhardt is available for golf lessons and the practice range is like none you have ever seen - just dirt, aiming poles and hogbacks.

Four Mile Ranch is a 1,640-acre master-planned golf community that sits in a valley just below one of Colorado's major tourist attractions, Royal Gorge, and was once a base camp for gold miners during the 1850s and later a cattle ranch.

You won't believe how affordable the golf is.

"We do have a stay and play package with Holiday Inn Express," Bernhardt said. "Golfers get a 10-percent discount on their rooms and our golf is discounted. Usually 18 holes with a cart on the weekend is $54, stay and play is $45."