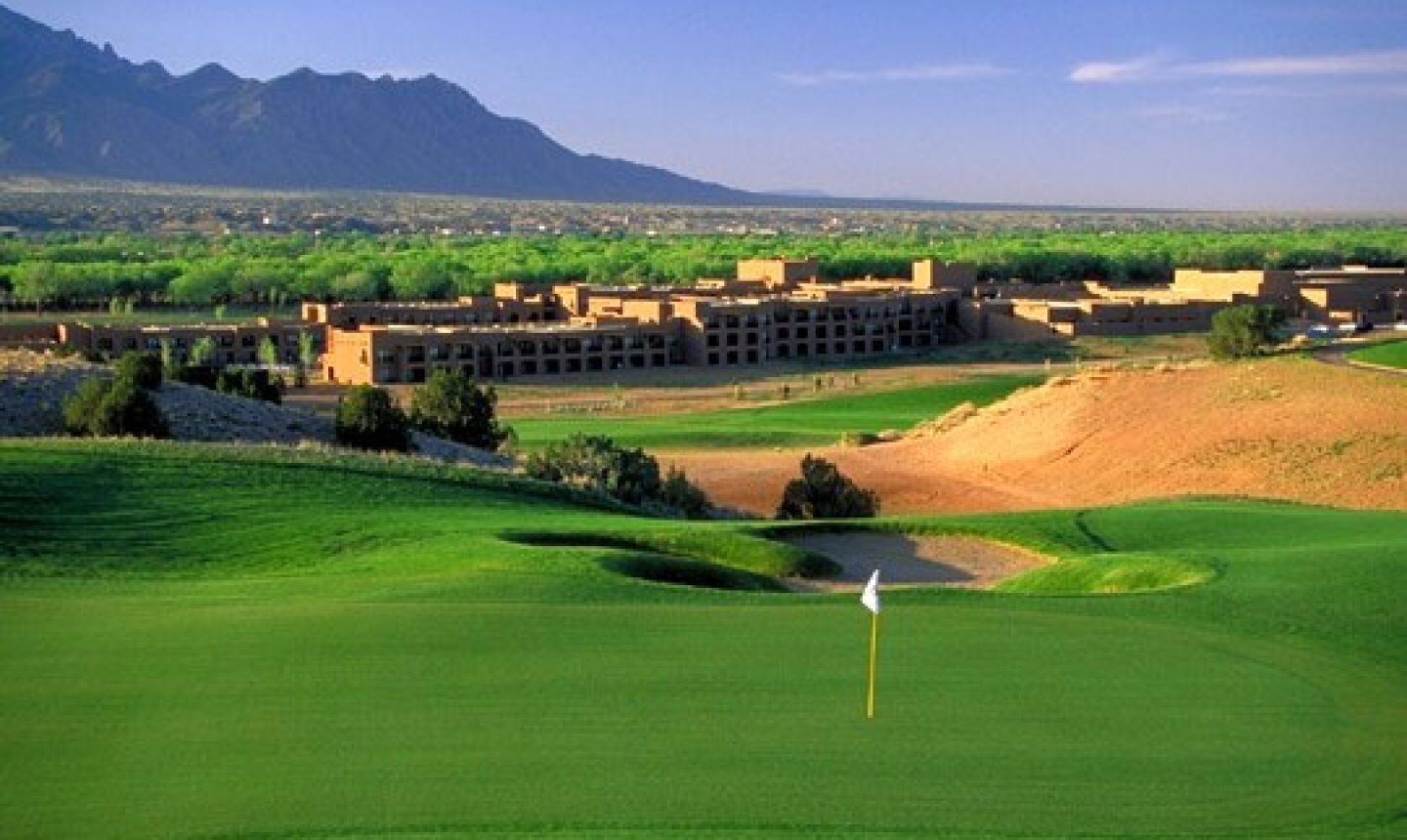 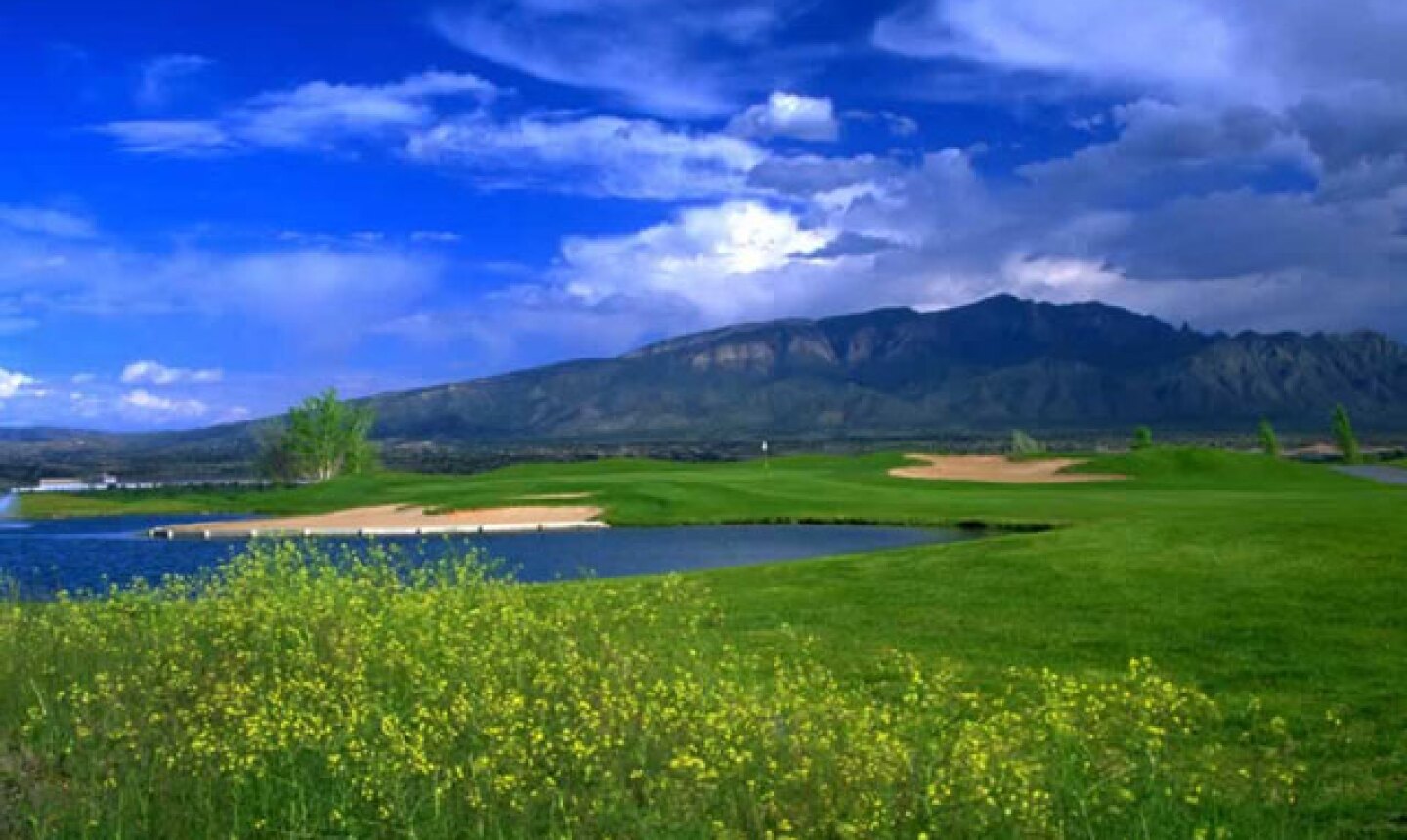 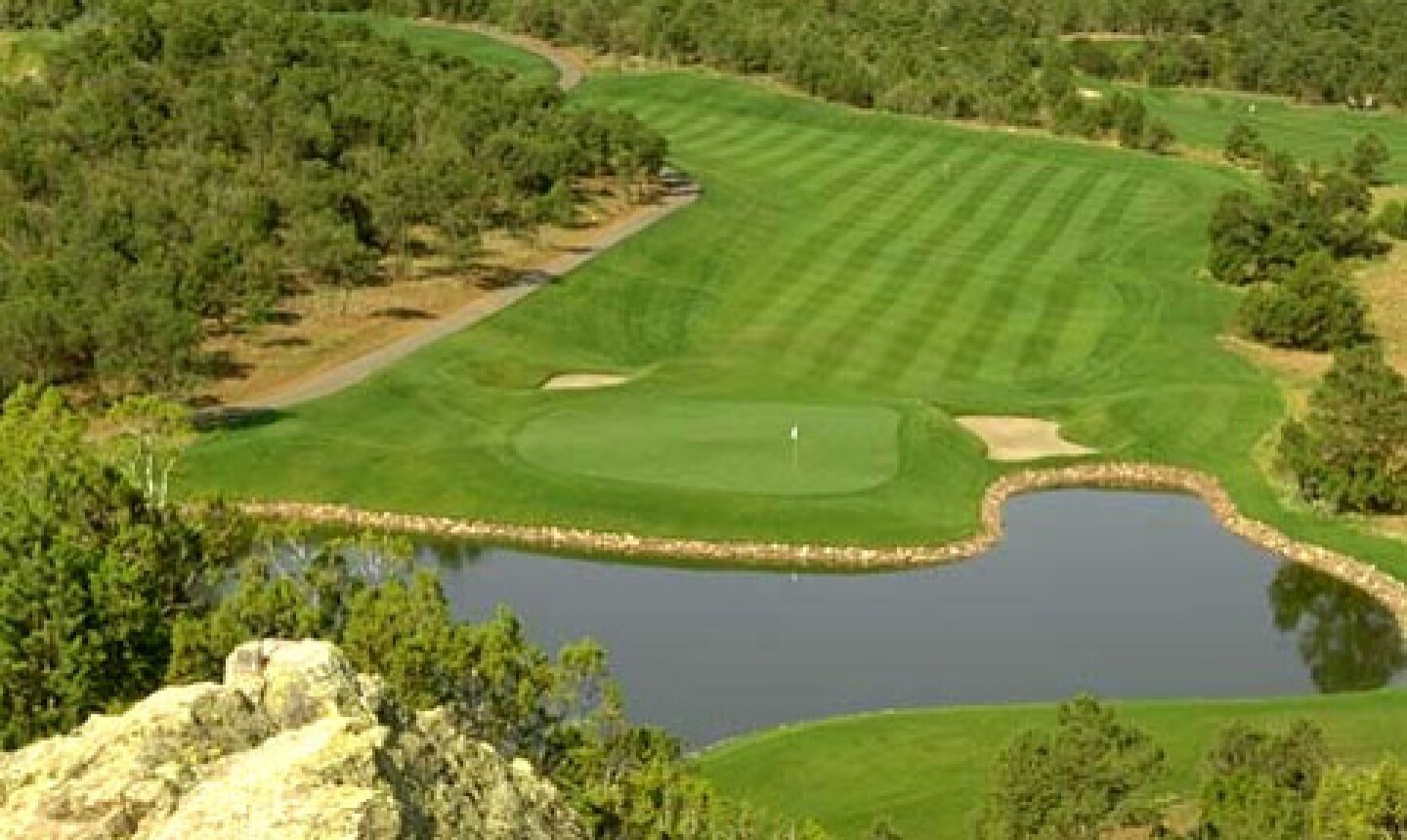 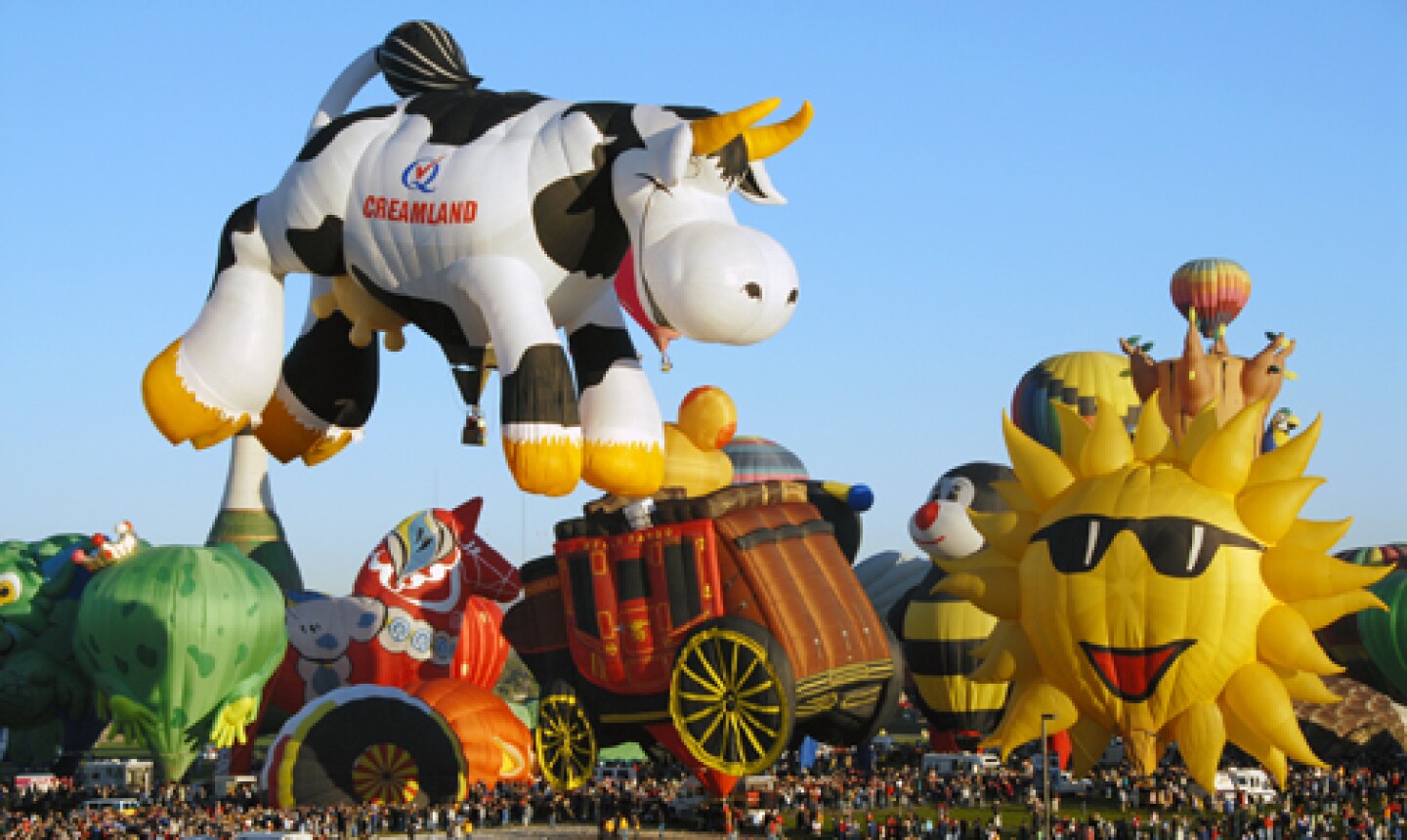 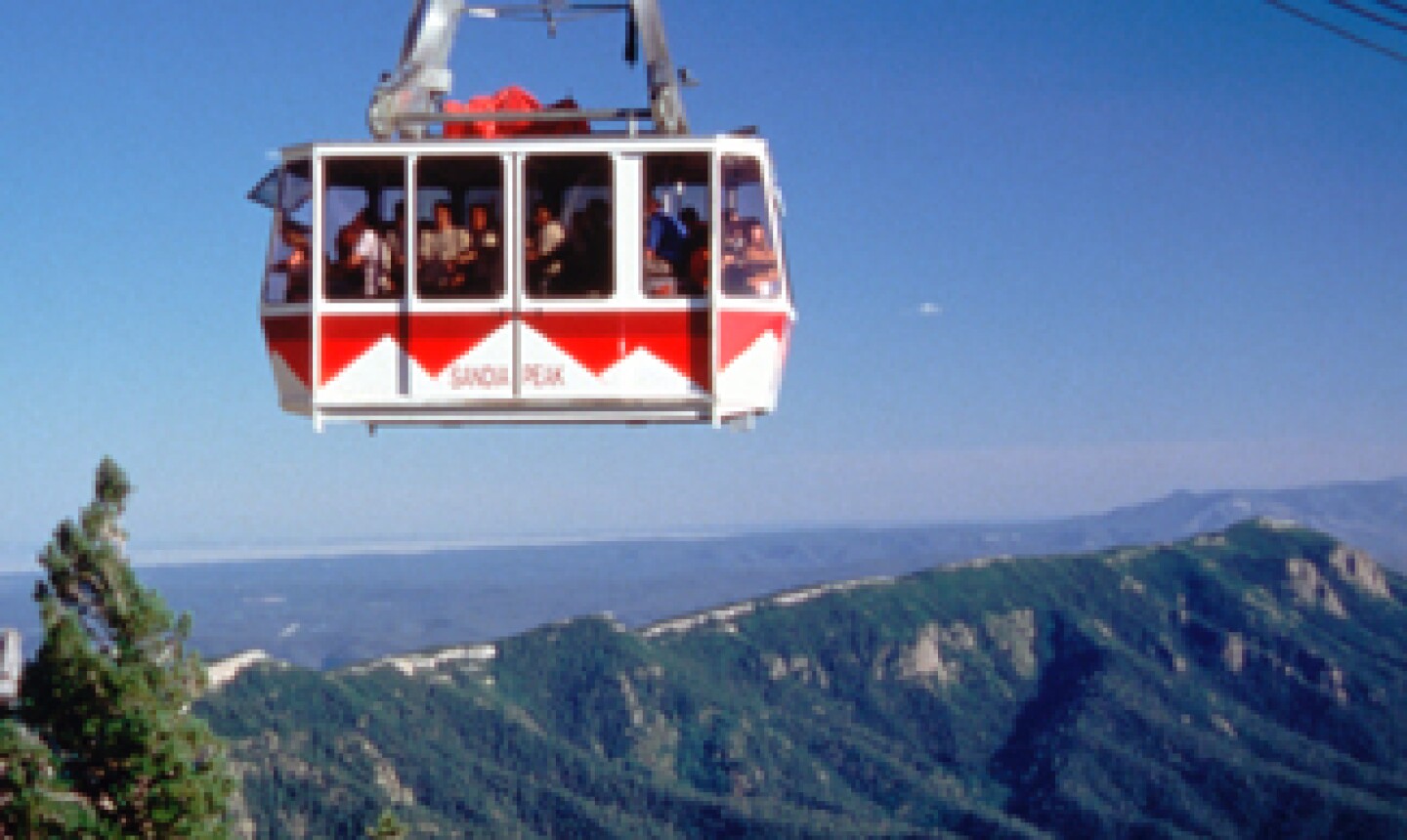 Mild weather, cultural diversity, affordable hotels and resorts - plus a mix of cool golf courses, such as Twin Warriors Golf Club and Pueblo de Cochiti Golf Course - are putting Albuquerque on the map as a must-play golfing destination.

Plus, the weather in Albuquerque, the state's most populated city with nearly 800,000 people, is milder than Arizona in the summer time with low humidity and more than 310 sunny days per year.

With relatively mild winters as well, many golf courses in the region stay open all year, although spring through fall is ideal. July is the only month of the year in which the average high exceeds 90 degrees (92).

The "Duke City," as it's also known, was founded in 1706, but its roots go to the American Indian people who have lived there for centuries. The Pueblo people who lived in the area when Europeans arrived in the 1500s had a sophisticated culture and advanced skills in stone masonry, ceramics and a wide range of arts and crafts. Many of these traditional techniques are practiced to this day, handed down through the generations.

The Albuquerque area is is one of the few places in the United States where you can play golf and ski in the same day. Golf Digest and Golf Magazine have ranked several of the public golf courses in Albuquerque among the best in the country. From desert links to parkland to mountain courses, the area offers a diverse selection of golf experiences.

Albuquerque's ski area, Sandia Peak, is just minutes from the city. Located just on the other side of the Sandia Mountains, which dominate Albuquerque's eastern skyline, 10,000-foot Sandia Peak has a certified ski school and a top-notch rental and ski shop. Visitors to the Albuquerque area can ride the world's longest single-span aerial tramway to the peak.

The Championship Course at the University of New Mexico: Located south of the school near the city's main airport, the UNM South is also known as "The Monster." Designed by Robert "Red" Lawrence, this 7,248-yard, par-72 layout has been the site of major amateur tournaments, including the 2008 NCAA Women's Championship and the William H. Tucker Invitational for the past 34 years. Featuring rolling fairways and undulating greens, the course, which opened in 1967, has several points that offer panoramic views of the city and surrounding mountains. The signature hole is probably the 248-yard, par-3 eighth, which calls for a tee shot to an elevated green over water. The complex also features a three-hole beginner course and full practice facilities.

Coyote del Malpais Golf Course: Located in Grants, about an hour west of Albuquerque off I-40, Coyote del Malpais is set against 11,000-foot Mount Taylor. This par-71, 7,184-yard course has 16 lakes and five sets of tees. Designed by William Howard Neff, the course, which has a rating/slope of 72.9/123, is wide open with large undulating greens. The signature hole is the 474-yard, par-4 17th, which requires a tee shot over water.

Isleta Eagle Golf Club: Consisting of three nines, this 27-hole daily facility is nestled against the backdrop of the Mount Taylor and Rio Grande. Located on the Isleta Pueblo, the three nines - Lakes, Mesa and Arroyo - are named for the prominent features that influenced the course's design. Any combination of the nines plays to a par 36 of at least 7,100 yards. The course is open year-round.

Paa-Ko Ridge Golf Club: Perennially named in major golf magazines' top 100 public list, 27-hole Paa-Ko Ridge provides some of the most stunning mountain views of any golf facility in the state. Designed by architect Ken Dye, of Finger, Dye and Spann of Houston, the course is set between 6,500 feet and 7,000 feet in the Sandia Mountains just north of Albuquerque. Many of the holes feature big elevation changes and can play two or three clubs one way or another because of it. Among the signature holes are two par 3s that play more than 260 yards (which is like 230 on most courses) - the eighth, "Panorama," and the 14th, "Cibola." Ranged among Golfweek's best 100 public golf courses, Paa-Ko Ridge enjoy terrific views from the club's spectacular clubhouse.

Pueblo de Cochiti Golf Course: Located in Conchiti Lake between Albuquerque and Santa Fe, Pueblo de Cochiti is situated along the foothills of the Jemez Mountains. Designed by Robert Trent Jones Jr., the course, which opened in 1981, has been ranked by Golf Digest as one of America's Top 75 Affordable Courses and listed among Golfweek's "America's Best Courses You Can Play" in 2007. The 6,817-yard course, which features bunkering on every hole, underwent an extensive renovation, overseen by Jones, in 2000.

Sandia Golf Club: Opened in 2005, Sandia Golf Club is the area's newest public golf course. Designed by Scott Miller, who also crafted We-Ko-Pa Golf Club in Arizona, this par 72 can be stretched out to more than 7,770 yards. Upon opening, Sandia Golf Club was named to Golf Magazine's 2005 list of "Top 10 New Courses You Can Play." The course encompasses strategically placed bunkers, challenging green complexes and panoramic views of the Sandia Mountains, the Rio Grande River, the Corrales Bosque and the greater Albuquerque area.

Santa Ana Golf Club: Located on the Santa Ana Pueblo land 20 minutes north of Albuquerque, Santa Ana Golf Club (sister course to Twin Warriors Golf Club) features 27 holes of links-style golf along the Rio Grande. Designer Ken Killian utilized native grasses, mounding and water hazards over 270 acres. Each configuration of 18 holes plays to a par 72 and more than 7,200 yards from the back tees. Having been ranked on Golf Digest's and Golfweek's top 100 lists, Santa Ana is surrounded by the Jemez Mountains to the west, the Sangre de Cristos to the north and the Sandia Mountains immediately east, offering a terrific view of 10,000-foot Sandia Peak.

Twin Warriors Golf Club: Designed by Gary Panks, Twin Warriors Golf Club has been ranked in the top 50 among Golf Digest's best 100 public golf courses. Host of the 2009 PGA Club Professional Championship, the course is named after the two warriors who led the Santa Ana people to settle along the banks of the Rio Grande. This par 72, which can play more than 7,700 yards, is routed in and around 20 ancient cultural sites of previous habitation and activity. The course rolls along grassy knolls and ridges dotted with Juniper and Pinon Pine. You'll also find plenty of arroyos, eroded land features and a sacred butte known as Tuyuna, or "Snakehead," against the backdrop of the Sandia Mountains.

Lodging and resorts in the Albuquerque area

You'll find all the major hotel chains as well as several resorts and casinos in the area. Many of them, such as the Isleta Casino and Resort, are connected to the local Indian tribes, which offer golf, gaming and great buffets.

One of the newer resorts is the Sandia Resort & Casino, which opened in late 2005. A business enterprise of the Pueblo of Sandia, this world-class resort just north of Albuquerque features 228 luxurious rooms including 20 suites, a 12,000-square-foot, full-service spa, and Bien Shur - a rooftop restaurant with a view for miles. There's also the Council Room Steakhouse, 35,000 square feet of convention and meeting space and the popular Sandia Casino and 3,500-seat amphitheater.

Just south of the city is the Isleta Casino and Resort. The property offers deluxe rooms with 40-inch flat screen TVs as well as an RV park. The resort features several quality restaurants, including 05 Fusion, which is a touch tropical, somewhat southwest, a bit Italian and part down-home barbecue. Stay-and-play golf packages are also available.

The Hyatt Regency Tamaya Resort & Spa is home to Twin Warriors and Santa Ana Golf Clubs on the Santa Ana Pueblo just outside of Albuquerque. The resort features 350 guestrooms with native décor and balconies, providing views of the Sandia Mountains and resort grounds. There are several restaurants on the property, more than 70,000 square feet of indoor and outdoor meeting space, and the Tamaya Mist Spa & Salon.

The official state question is "red or green?" referring to the chile that's so predominant in New Mexican cuisine. The food here is based on native ingredients such as corn, beans, squash and chiles, and incorporates Mexican, American Indian and Spanish flavors.

No trip to Albuquerque could be complete without stopping by the renowned El Pinto Restaurant (www.elpinto.com). Famous for its various homemade salsas, which are marketed around the world, El Pinto can seat more than 1,000 in its outdoor summertime configuration. Located on 10500 4th Street NW in Albuquerque, El Pinto has been serving authentic New Mexican favorites, such as flat or rolled green or red chile enchiladas, since 1962.

Also on 4th Street is the Calico Café (www.calicocafellc.com). This mom-and-pop restaurant serves steak, enchiladas and the house specialty Carne Adobado Burritos, which is made with marinated pork roasted with a special blend of spices.

You could also try Casa de Ruiz Church Street Cafe (www.churchstreetcafe.com), which has a long and distinctive history. The house was built during the founding of Albuquerque sometime after 1706, making Casa de Ruiz the oldest residence in Albuquerque and one of the oldest structures in the state of New Mexico.

Getting to Albuquerque by plane or car

Ten commercial airlines fly into the Albuquerque International Sunport. If you prefer the train, Albuquerque is also a major stop for Amtrak. By car, I-25 and I-40 intersect in Albuquerque, and the average city drive time is less than 20 minutes.