Golf Courses with the Weirdest Number of Holes 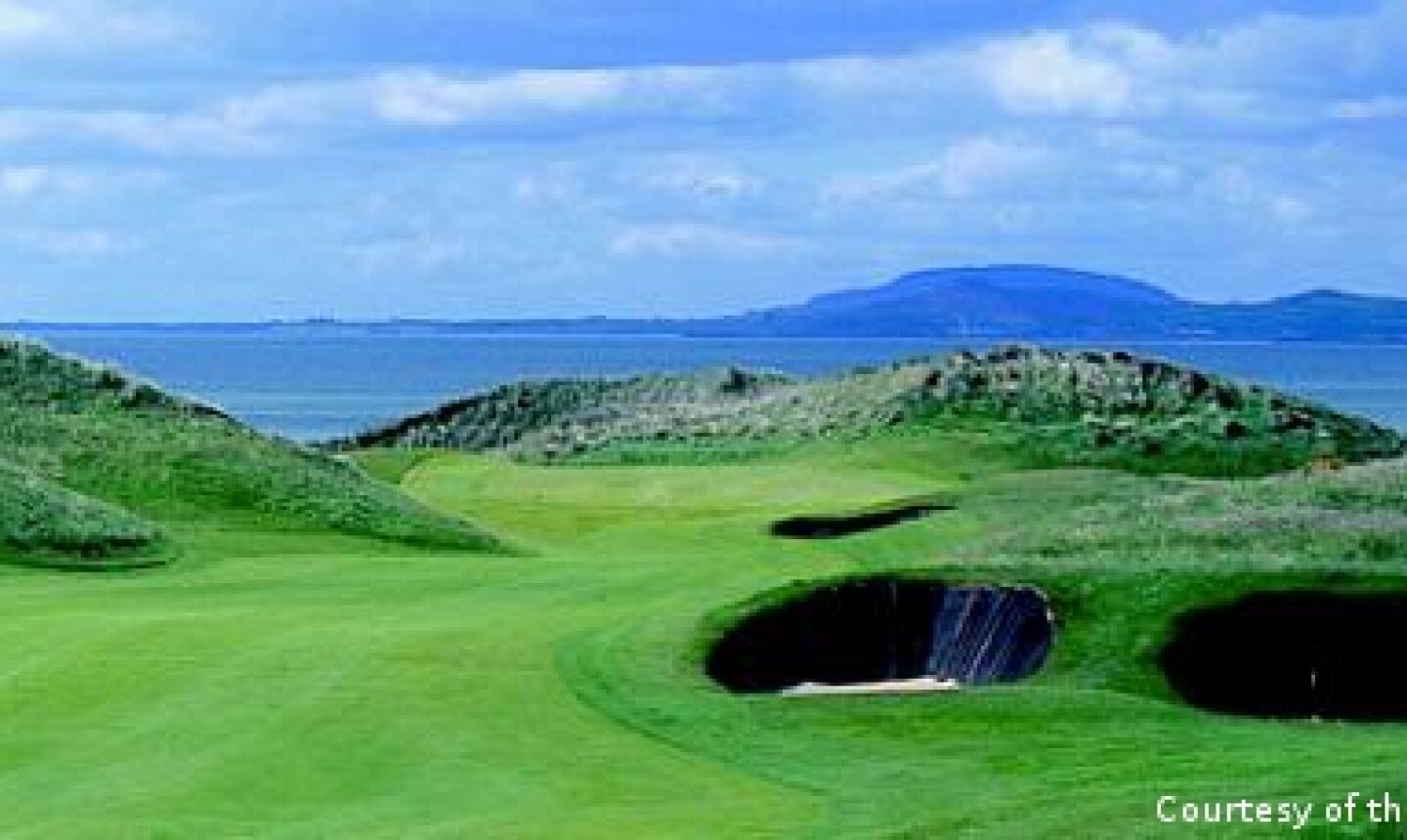 Owner/designer Pat Ruddy let the land dictate how many holes Ireland's European Club would have.

I haven't made up my mind about 12-hole golf courses, the idea Jack Nicklaus floated in 2007 and is now promoting again. (His private Muirfield Village Golf Club in Ohio hosted 12-hole tournaments over Labor Day weekend).

The idea did, however, get me thinking about some of the similarly "strange" golf course configurations I've come across in my travels.

For example, here in the USA, there are some pretty high-profile courses with 10, 13, and 21 holes.

And you're not going to believe what's going on in the rest of the world.

Apparently, not everyone got the memo that modern golf courses are "supposed" to have at least nine holes...or at least be built in multiples of three.

For example, there are four-hole courses in France and Austria (and now Vermont given that Okemo Valley Golf Club opened its "Family Fore" course this summer).

Not odd enough for you? Iceland has a five-hole course.

Six-hole courses are actually quite common here and abroad.

Seven holes? I can't think of any off the top of my head.

An eight-hole course by Hurdzan/Fry was scheduled to open this summer at Ohio's Glenlaurel Inn, but delays may push it back to 2012.

There's a 10-hole course at Kukio Golf Club in Hawaii (designed by Tom Fazio no less).

12 holes: There are a bunch of these (and seemingly more on the way given Nicklaus' influence). Two that immediately come to mind are the Shiskine Golf & Tennis Club, in Scotland and the Challenge Course at Monarch Dunes in Nipomo, Calif. (By the way, the first British Open Championship was held at Prestwick Golf Club when it only had 12 holes.)

15 holes: Oak Hills Golf Course in Charlotte, N.C., had four holes overtaken by interstate highway; one was rebuilt (thanks goes to Marve H. below for this one)

17 holes: This would be downright silly.

19 holes: More common that you might think, particularly at private courses to break ties and settle bets. Played a nice one of these "hog holes" this season at Sebonack Golf Club on Long Island. Michigan's Forest Dunes has a great one, too, a nod to the 6th hole at Riviera Country Club with a sand trap right in the middle of the green.

20 holes: The European Club in County Wicklow, Ireland. The lifelong dream of golf writer turned golf architect Pat Ruddy, there were two extra holes built because, as Ruddy puts it, "We had enough land, and we're here to play golf aren't we?" Haig Point on Daufuskie Island, S.C. (one of my favorite places in the world) also has 20-holes on its Rees Jones Signature Course.

21 holes: Parkersburg Country Club in Vienna, W.V. They do everything a bit differently in West Virginia, don't they? (Hailing from New Jersey, I have the right to poke fun at someplace else.)

22 holes or more: Nothing current that I can think of, although the Old Course at St. Andrews was expanded from 12 to 22 holes before being scaled back to its current 18.

Mmm, makes you wonder if all these alternative configurations represent a trend back to golf's less formal roots.

Have you come across golf courses with something other than 9 or 18 holes? What's your opinion on these "different" configurations? Please share your comments below.

Craig Better
Craig Better is one of the founding editors of Golf Vacation Insider. In addition to traveling to 15 foreign countries, he has twice traveled across America to play golf courses in all 50 United States. Prior to joining Golf Vacation Insider, Craig was a freelance writer who contributed to GOLF Magazine, Travel + Leisure Golf, Maxim Magazine, USAToday.com, and co-authored Zagat Survey’s book, America’s Top Golf Courses.
31 Comments

Eastern Oregon just opened up a new resort called Silvies...the McVeigh course has 7 holes! It is quite a unique layout.

South of Eugene, OR there is a course called Hidden Valley that has 10 holes.

Played The European Club last Saturday 1st October , and I had forgotten how magnificent the experience was. I last played it about 15 years ago and it is definitely one of the most spectacular and challenging layouts you will ever encounter. Make sure it is on your itinery when you plan your visit to Ireland.

I cant remember the name of the course, but there was one in Ohio that I played that had a "warmup" hole. You left the proshop and teed off and played the hole without counting score. A great warmup without the stress of First hole jitters
It is getting so slow on the courses anymore that I would rather play a 14 hole course and go home in less than 4 hours instead of having to sit and wait while some plumb bobbing nitwit to take 5 1/2 hours to mangle a course and waste a perfectly good day.
Too old to dedicate an entire day for a round of golf

Just a point of reference. The last four holes at Prestwick were the original holes. The extra 6 they added are in the middle of the round and are the long par 4s.

Black Bear Golf Club in Vanderbilt, Michigan has 19 holes. The first hole is about a 160 yard par 3 that is intended to be a warm up hole.

Barnbougle Lost Farm (the 2nd course at Barnbougle in North East Tasmania, Australia) has 20 holes, with 13a and 18a both excellent Par 3's for a Par 78 layout. Any of the 6 Par 3 holes in the courses full configuration would make brilliant signature holes at many top flight courses around Australia, such is the quality of this course.

Bear Mountain Golf course in Victoria on Vancouver Island (designed by Jack and Steve Nicklaus) has a 19th hole that overlooks the Olympic Mountains. It is between the 14th and 15th holes and the spot is so awesome that Stevie thought they should put a golf hole there. They call it the "betting hole" because lots of matches that are tied end up going to the score on that hole to determine who wins. It was also the site where the Telus Skins Game 2010 had the million dollar "Hole in One" hole that Mike Weir put it the closest. One of the most beautiful courses we have ever played.

Oak Hill in Charlotte has only 15 holes, the rest taken by an interstate highway

About 40 miles from Buenos Aires City, Argentina, there is a pretty good public golf course, LA ORQUIDEA.
It has 19 holes... and when the owner plays, 16th hole is a dogleg right par 4, which green is besides his own house.
When he is not at home, 16th is a par 3, obviously with another green and far away from where he lives...

In Toledo, Bayview Retirees Golf Course has 12. As the name implies, it's open only to those 55 and older - otherwise public.

Vermilion Country Club (despite the name, totally public, has been for years) in Ohio has 12 -- but it's set up for nine, with the other three apparently coming into play only when the course is partially flooded!

Kira K. Dixon
Lifestyle Correspondent
Now Reading
Golf Courses with the Weirdest Number of Holes
New Cookie Policy
WE AND OUR PARTNERS USE COOKIES ON THIS SITE TO IMPROVE OUR SERVICE, PERFORM ANALYTICS, PERSONALIZE ADVERTISING, MEASURE ADVERTISING PERFORMANCE, AND REMEMBER WEBSITE PREFERENCES. BY USING THE SITE, YOU CONSENT TO THESE COOKIES. FOR MORE INFORMATION ON COOKIES INCLUDING HOW TO MANAGE YOUR CONSENT VISIT OUR COOKIE POLICY.
CONTINUE
Search Near Me