Torrey Pines gets its first major since the epic playoff won by Tiger Woods in 2008.

The 2021 U.S. Open returns to Torrey Pines South. It's the second U.S. Open for the famed municipal course in San Diego. We all remember its first staging vividly when Tiger Woods, playing on a broken leg, holed a birdie putt on the 72nd hole to force an 18-hole Monday playoff with Rocco Mediate. That playoff would also require a sudden-death playoff hole.

A lot has changed in golf and at Torrey Pines since 2008. The U.S. Open has abandoned its 18-hole Monday playoff in favor of a more fan-friendly, two-hole aggregate playoff. Tiger Woods will not be in competition in 2021, out due to injury following his car crash earlier this year.

The South Course at Torrey Pines also looks a bit different. The city of San Diego spent $14 million on a slight redesign by Jones in 2019 to add even more difficulty, though most of the work was done underground, installing a new irrigation system. Perhaps the most noticeable change for viewers is the shifting of the par-4 17th fairway to the left, bringing the canyon more into play. New championship tees stretch the course to 7,765 yards. 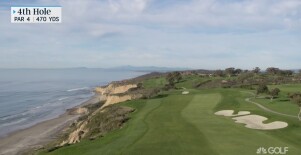 Despite its scenery along the cliffs of La Jolla, Torrey Pines South is not a favorite of all architecture critics, including the most famous one: Phil Mickelson, a local resident who has been outspoken about the changes Rees Jones has made over the years. Even so, you won't find Lefty complaining if he hoists the trophy to complete the career grand slam after being six times a bridesmaid.

If it plays more firm and fast in the drier month of June than it traditionally does for its Tour event in the winter, Torrey Pines should be a strong test of golf, but will it be tough enough to land a third U.S. Open down the road and keep its place among the pantheon of major championship munis?

Here's a hole-by-hole tour of the South Course at Torrey Pines with new photography from the USGA prior to the 2021 U.S. Open.

Will be able to enjoy the golf on TV now that I know each hole.
Thank you.