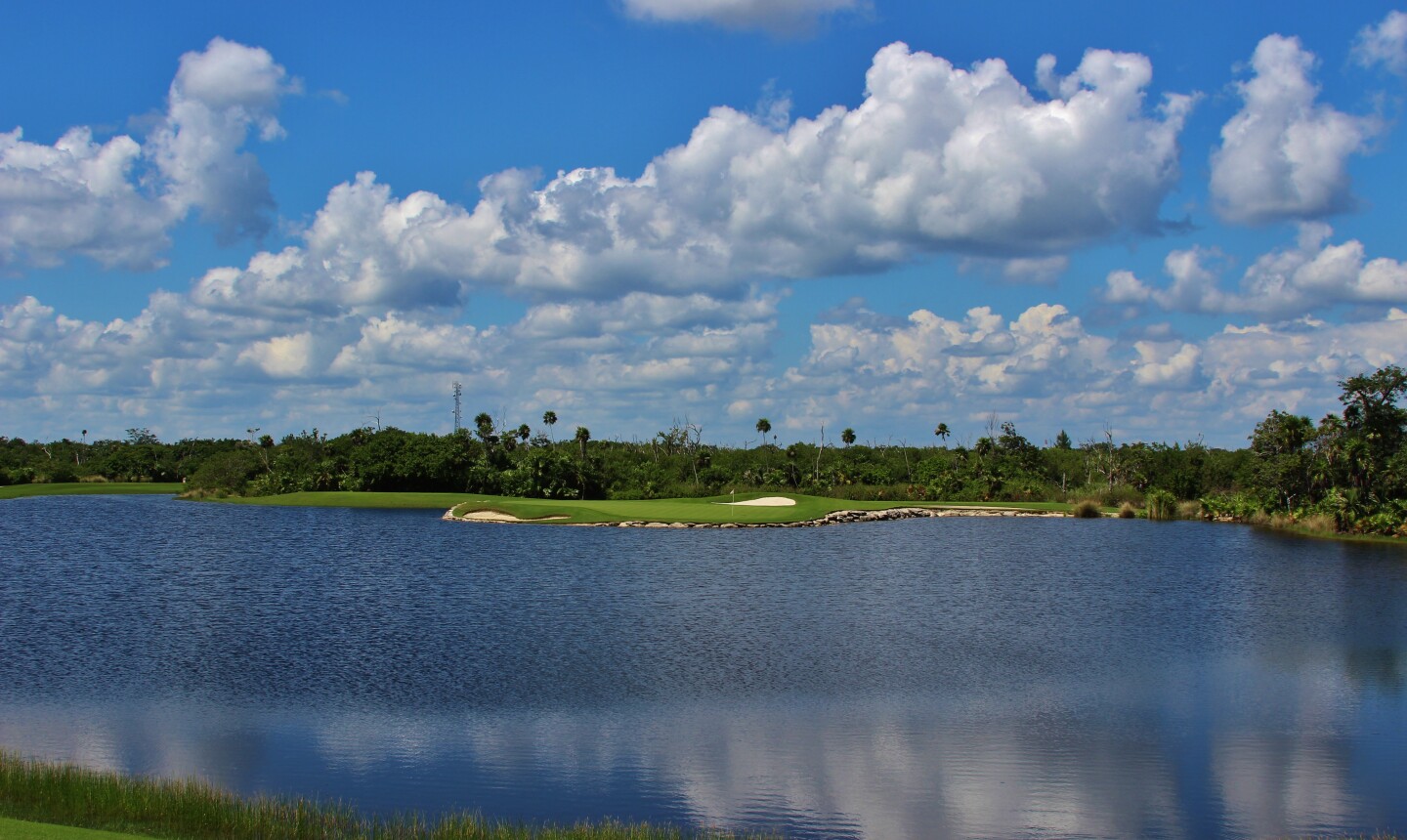 This peninsula green makes for a great par 3 on the eighth hole of the Lakes nine at the Moon Palace Golf & Spa Resort. Jason Scott Deegan/GolfAdvisor 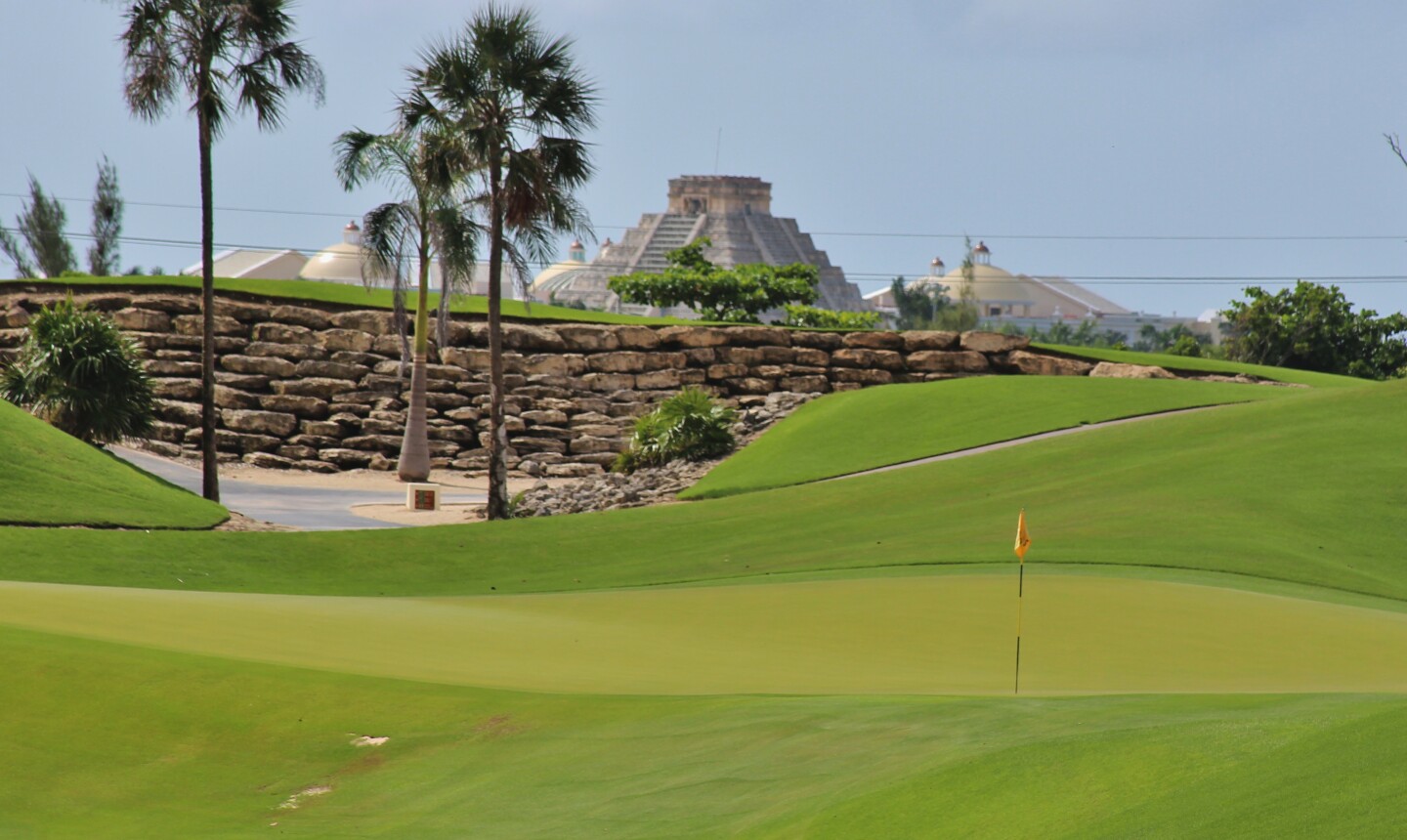 A replica of a Mayan palace sits in the background of the ninth green at the Iberostar Playa Paraiso Golf Club south of Cancun. Jason Scott Deegan/GolfAdvisor 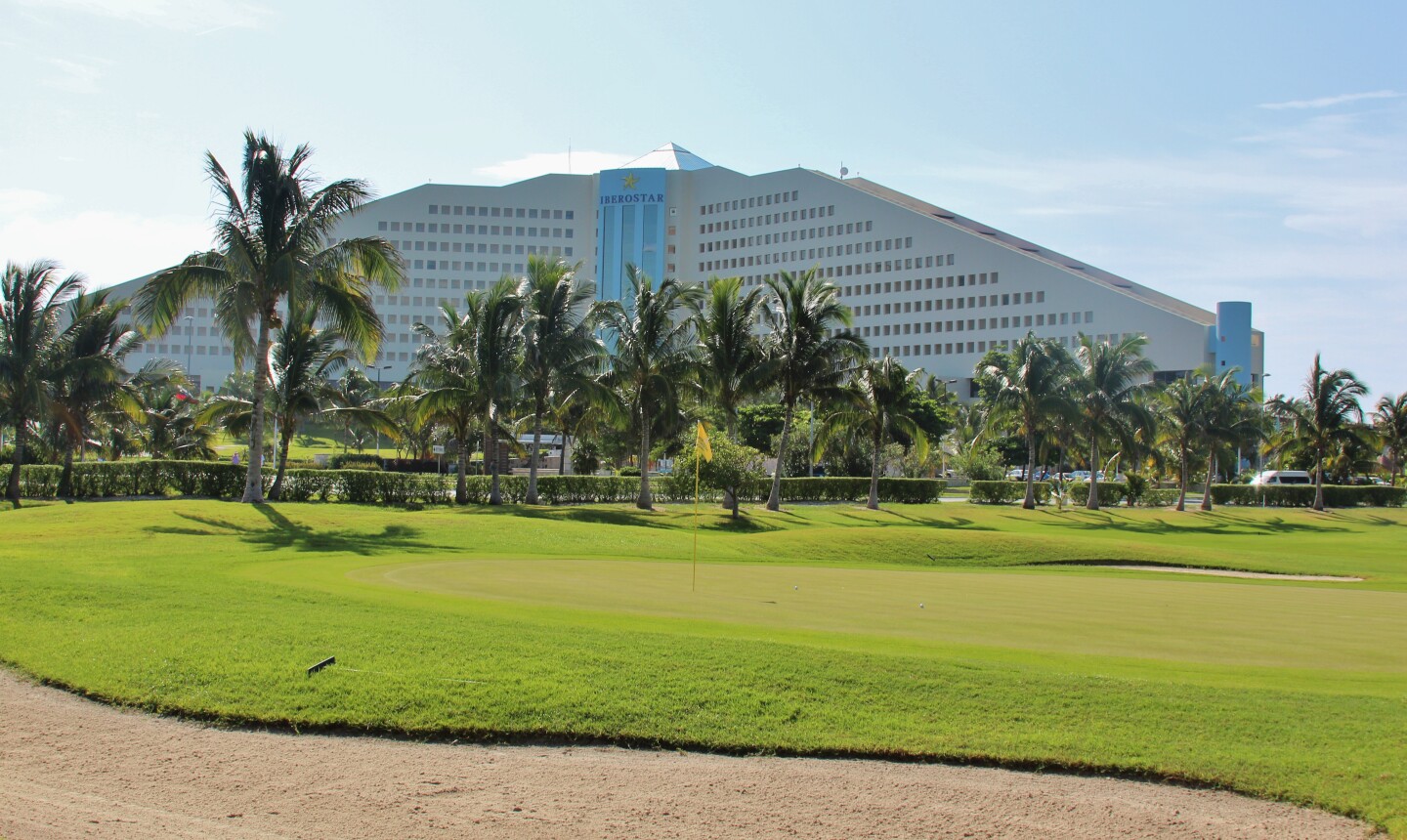 CANCUN, Quintana Roo, Mexico -- Tired of those $5 beers and $4 candy bars from the beverage cart?

The Riviera Maya wants you.

The all-inclusive theme of the region's resorts has bled into area golf clubs over the past few years. Leading the charge are the Iberostar Resorts and the Palace Resorts. Guests at these high-end resorts get premier pricing playing golf, but anybody who wants to go all-inclusive on the course can get the same experience for a surcharge.

For example, golfers who stay at an Iberostar property (there are several in the region) can play the Playa Paraiso Golf Club or the Iberostar Cancun Golf Club for a steal of $79 (if they're not on a golf package already). Even better, guests of the luxurious Iberostar Grand Hotel Paraiso get one round free for a three- to four-night stay. Non-resort guests must pay roughly $200 to get the same all-inclusive treatment at either course. Depending on how much beer (or shots of premium tequila) they drink, and whether they eat lunch or dinner, that price tag might be worth it.

The Moon Palace has refined the all-inclusive experience on the golf course. Several years ago, the 27-hole Jack Nicklaus club switched from beverage carts to permanent food-and-beverage stations built to be accessible twice on every nine-hole loop. This has not only increased pace of play, but also a business analysis found that golfers waste less food.

Golfers still stop too long to stock up on sandwiches, muffins, chips and alcohol of all sorts -- from mixed cocktails to beer -- but everybody does it, so the wait never causes much of a problem. These stations are better than a roving cart because they're equipped with blenders, fridges and more premium liquors.

All three nines conveniently end at the clubhouse. My group, which included two couples (one spouse didn't play but rode along), was so hot after nine holes that we stopped for a quick lunch. A buffet serving hot dogs, tasty nachos with salsa and cheese and chili were quite convenient for a quick bite to eat. I cooled off with two scoops from the ice cream and Popsicle station.

My playing partners, Mark and Shyla Tilley, of Grand Junction, Colo., said the food has improved tremendously since they started playing at the Moon Palace five years ago.

"The quality of the food techniques and the cooking process is better," said Mark Tilley, who works in the restaurant business. "They are happy to serve you. It's not the case at all all-inclusive resorts. Even the service and food at the golf club is great. It's fully stocked."

All three nines of the Moon Palace are solid to strong, although better players will want a shot at the Dunes Course, the most scenic and punishing loop in the region.

This fun P.B. Dye design is another strong amenity of the Iberostar Playa Paraiso Resort, home to five hotels and more than 2,000 beds.

Dye went a little wacky (in a good way) with the shaper, pushing up huge mounds and creating wild greens. Golfers will get some awkward lies, but considering the flat terrain of the other golf courses in Cancun, this round will be a welcome change.

The three-tiered green at no. 7 features ridges like ski slopes.

Playa Paraiso hosted a Canadian Tour event in the 1990s, and has hosted Monday qualifiers for the PGA Tour's OHL Classic at Mayakoba.

The former Kukulcan Golf Club was rebranded when the former Hilton hotel next door became the 426-room Iberostar Cancun in December 2011.

The 6,734-yard course winds through the jungle between the Caribbean Sea and the Nichupte Lagoon. The course aesthetically isn't as beautiful as those outside of the Cancun hotel zone, but it's got all the strategy necessary to test anybody's game. Cross winds off the water make the course play tougher than the generous slope and rating imply.

A lawsuit filed by a Long Island golfer who lost several fingers in a crocodile attack during the 2013 season brought unwanted international attention to the course. To err on the safe side, don't bother looking for lost balls in ponds or the jungle. Drop one and move on. If you're not happy about losing a ball, just enjoy the cervezas. They're free.

Kira K. Dixon
Lifestyle Correspondent
Now Reading
Pig out on all-inclusive golf along the Riviera Maya in Mexico
New Cookie Policy
WE AND OUR PARTNERS USE COOKIES ON THIS SITE TO IMPROVE OUR SERVICE, PERFORM ANALYTICS, PERSONALIZE ADVERTISING, MEASURE ADVERTISING PERFORMANCE, AND REMEMBER WEBSITE PREFERENCES. BY USING THE SITE, YOU CONSENT TO THESE COOKIES. FOR MORE INFORMATION ON COOKIES INCLUDING HOW TO MANAGE YOUR CONSENT VISIT OUR COOKIE POLICY.
CONTINUE
Search Near Me