Quicksilver Golf Club: Play a round (and around) in the dynamic Pittsburgh area 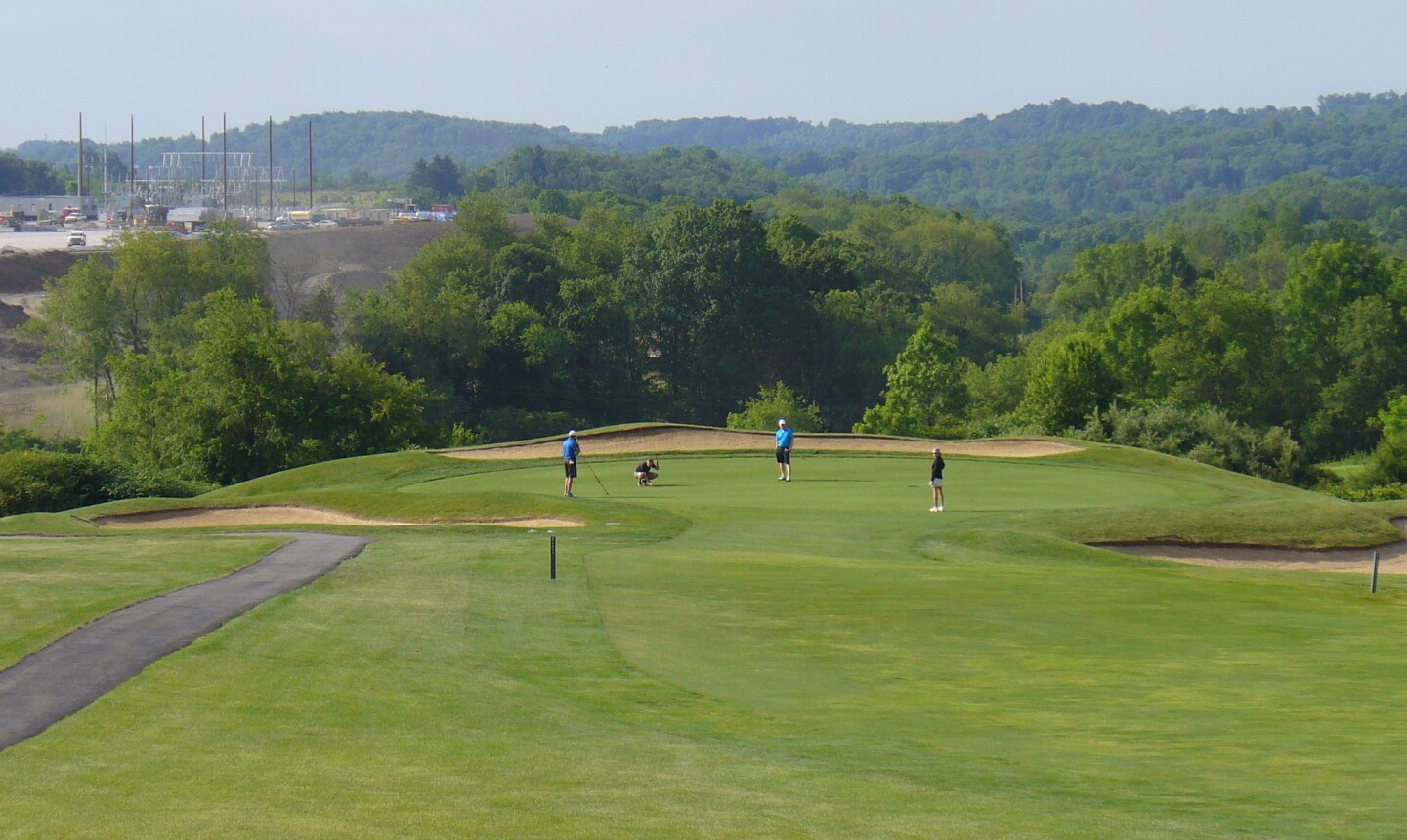 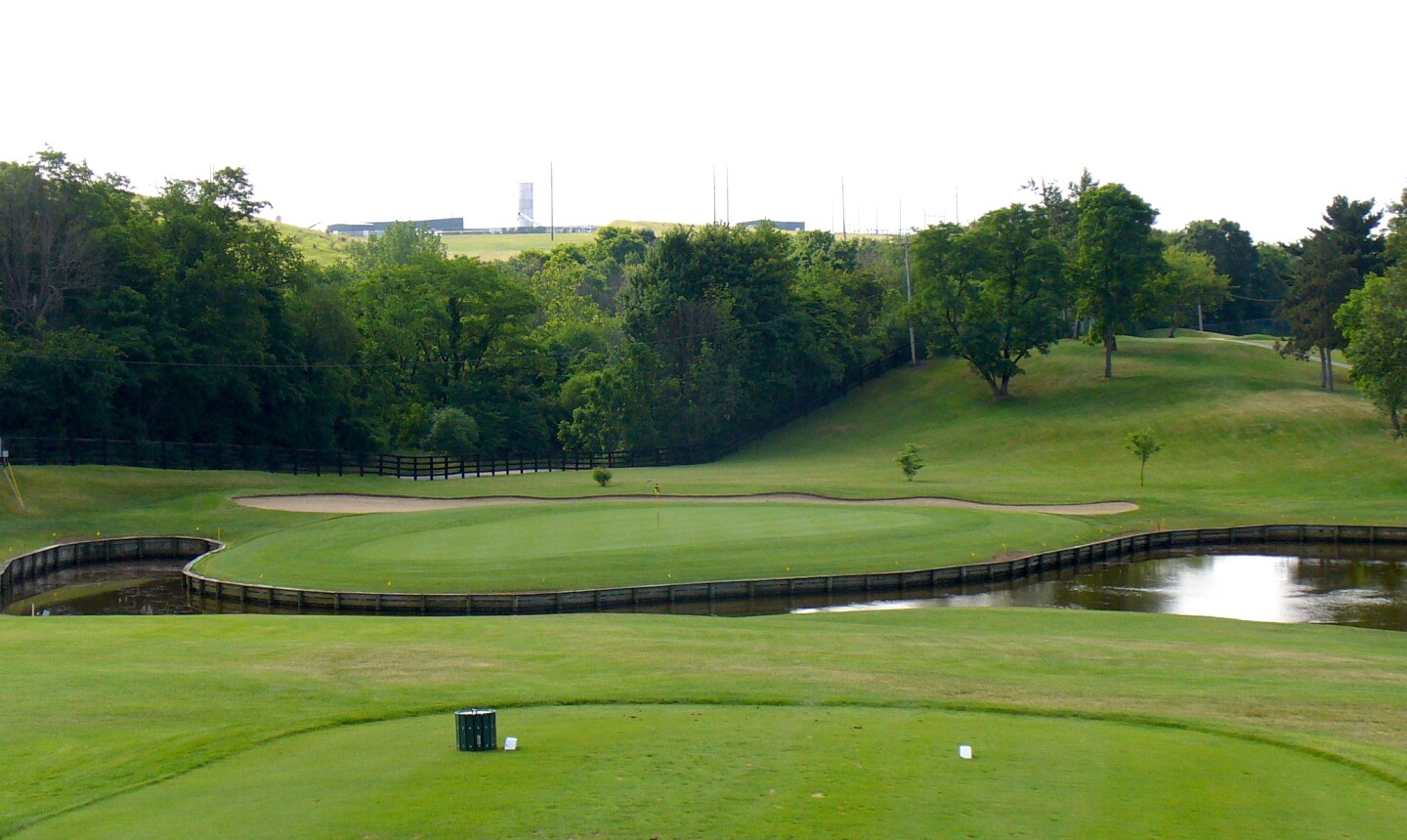 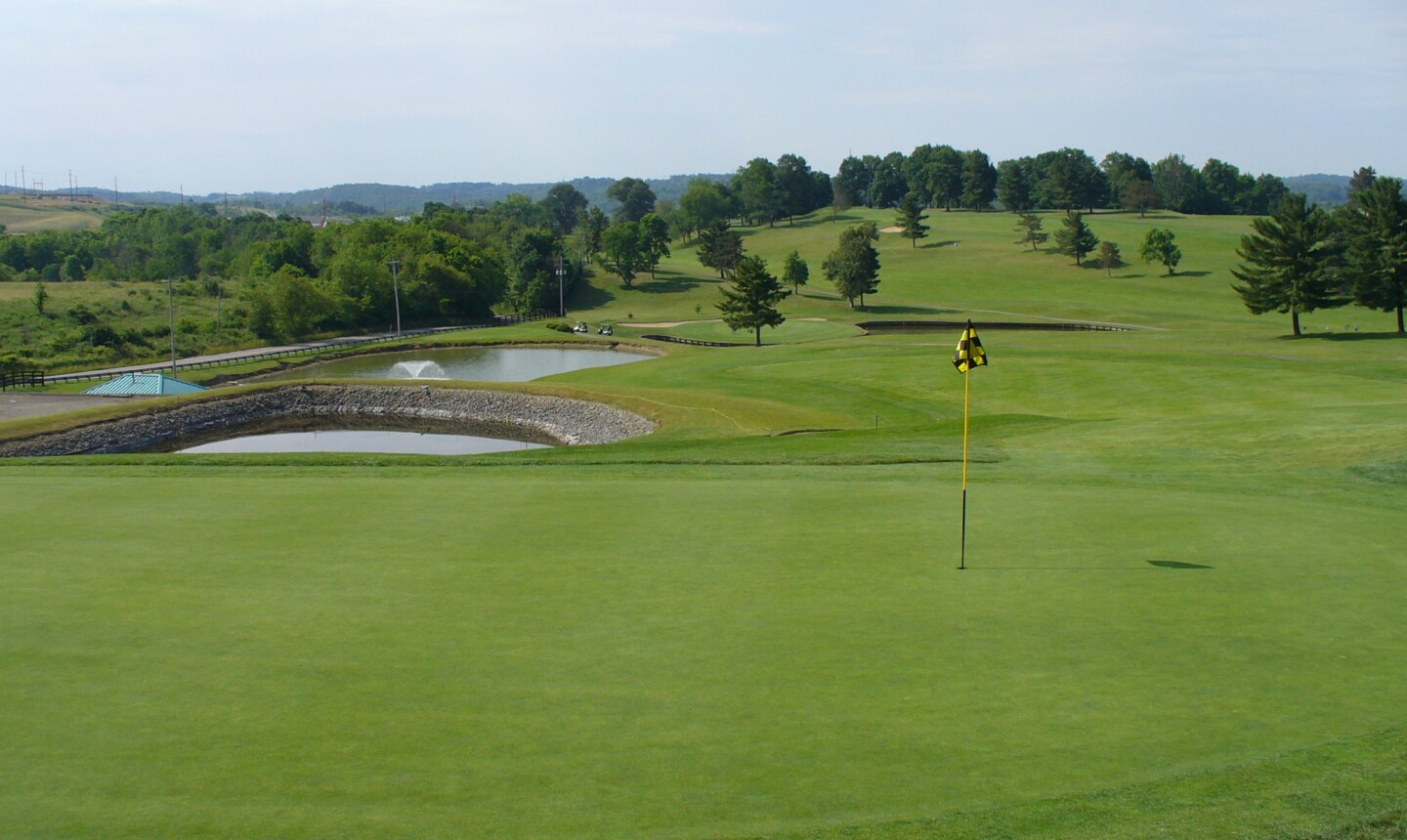 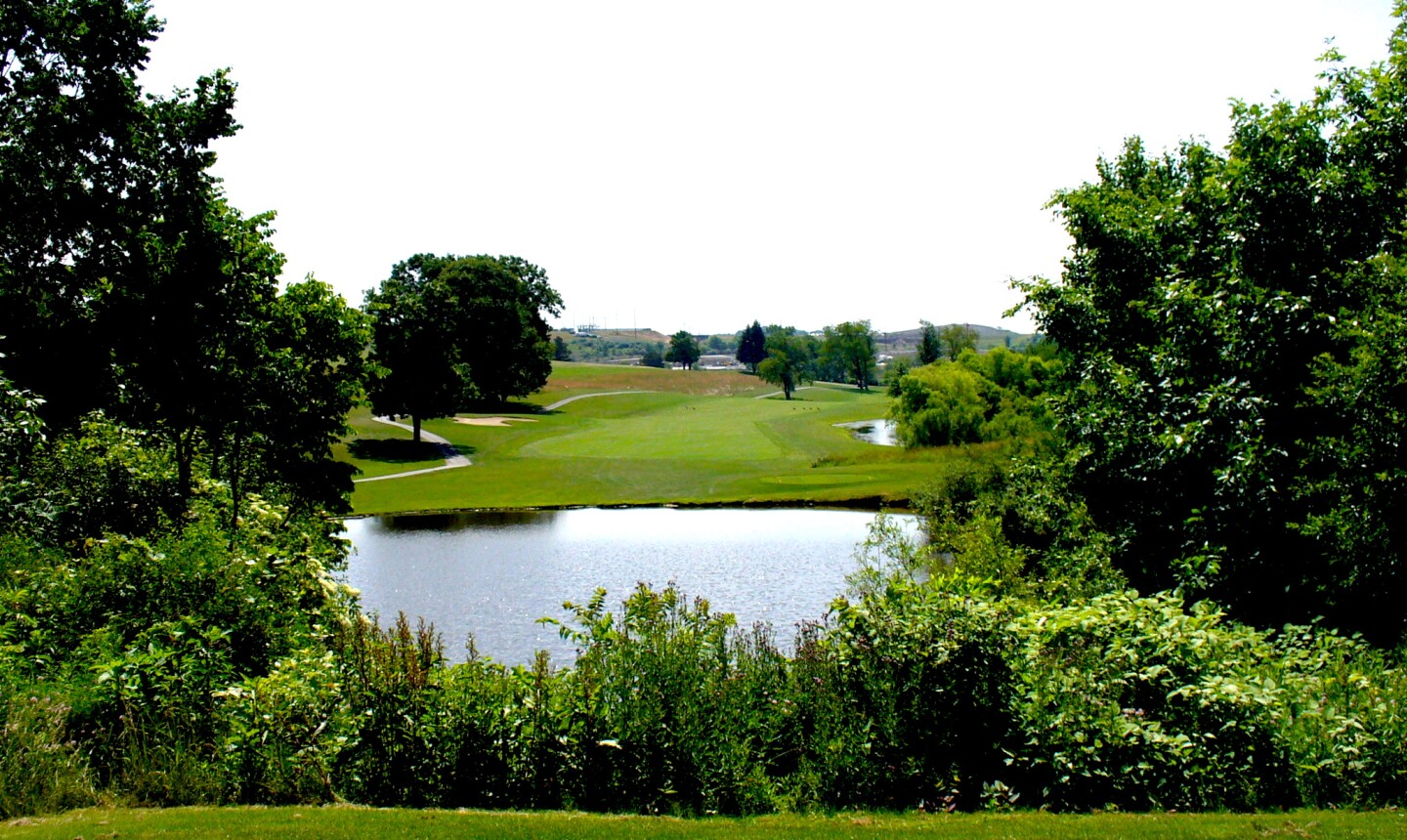 The 570-yard 15th hole at Quicksilver Golf Club is arguably the toughest driving hole on the course. Kiel Christianson/Golf Advisor 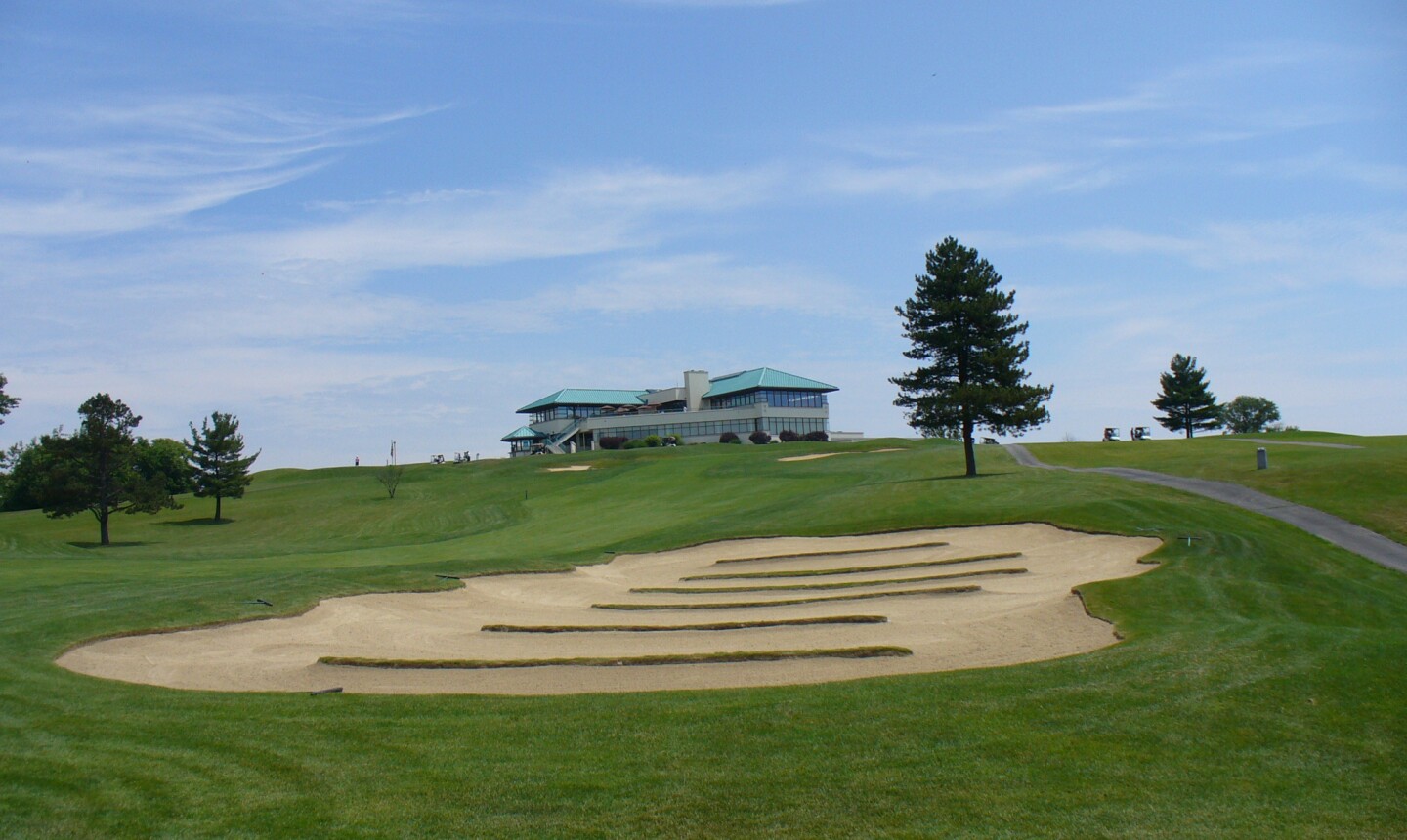 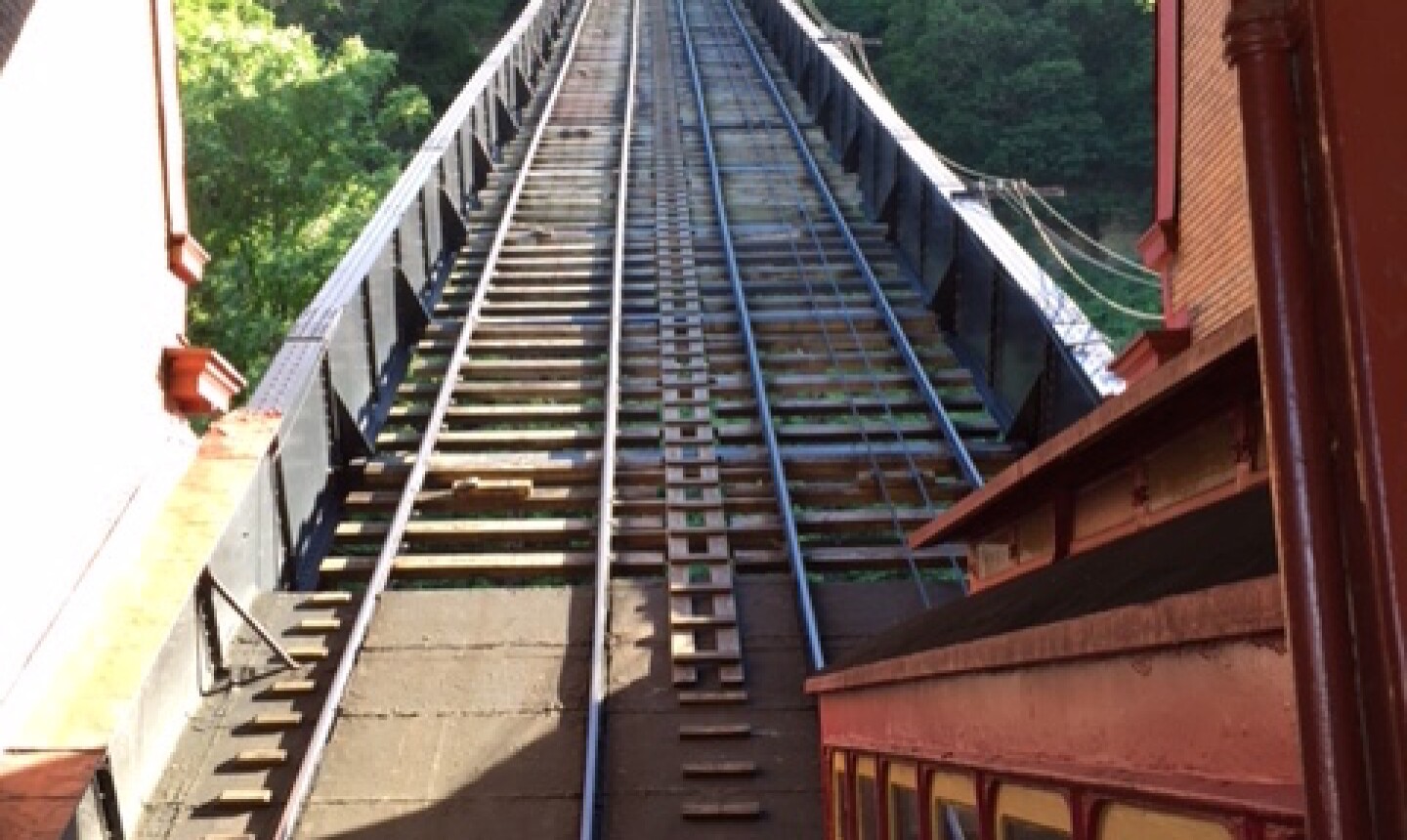 The Duquesne Incline has been hauling commuters and tourists alike up and down Mount Washington since 1877. Kiel Christianson/Golf Advisor 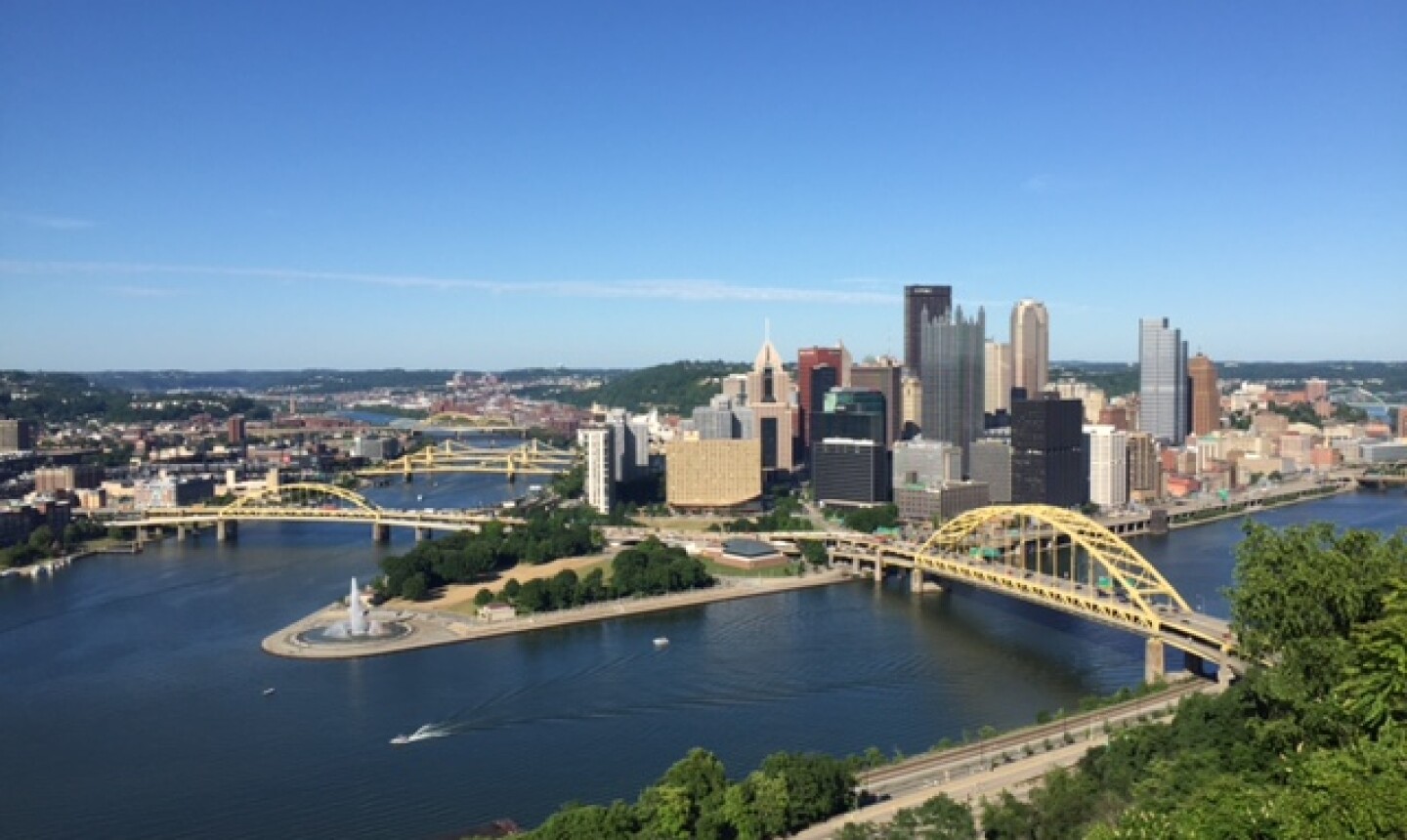 The view of downtown Pittsburgh from atop Mount Washington is pretty impressive. Kiel Christianson/Golf Advisor 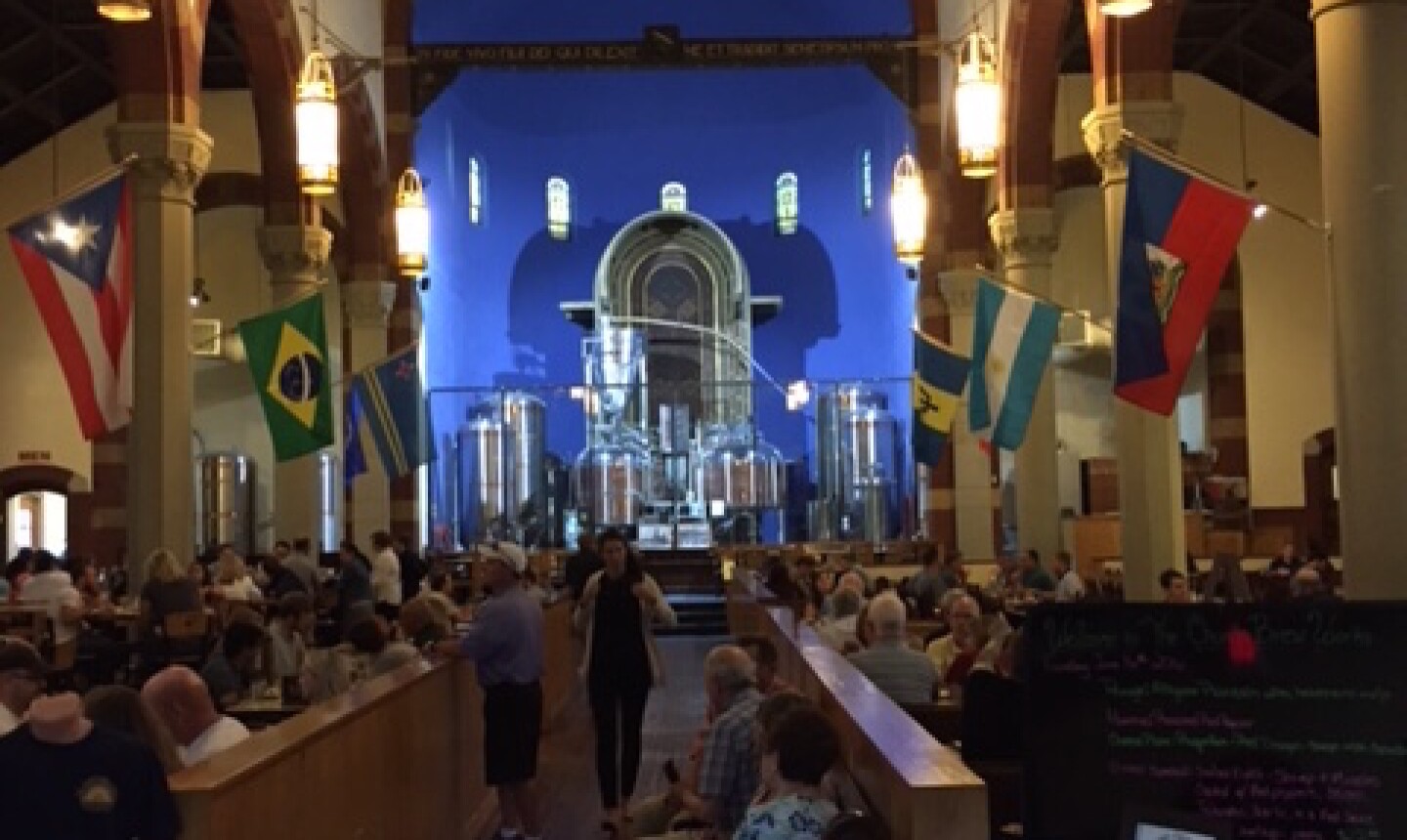 There's lots of good craft beers in Pittsburgh, but the only ones brewed in a church are found at the Church Brew Works. Kiel Christianson/Golf Advisor 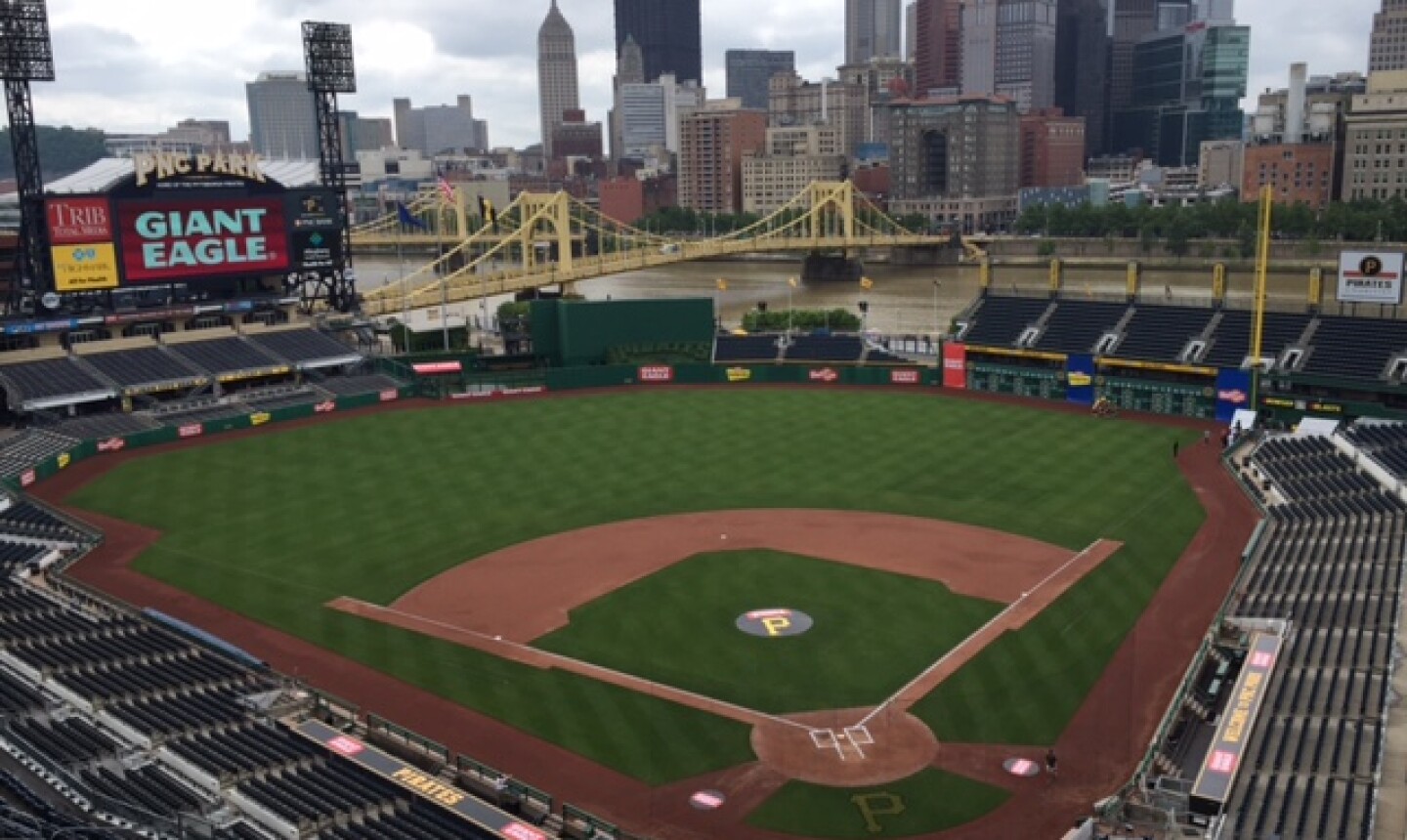 PNC Park, home of the Pittsburgh Pirates, has an old-timey atmosphere with all the modern conveniences and a great view of The 'Burgh. Kiel Christianson/Golf Advisor

Set just outside Pittsburgh, Quicksilver Golf Club is one of the best public courses in Pennsylvania. It also happens to be a great value and an eminently playable track, Kiel Christianson reports.

MIDWAY, Pa. -- Your perception of Pittsburgh will vary greatly depending on when you last visited. If you were there in the 1970s or 1980s, as steel mills were closing down and the economic and environmental aftereffects lingered, the perception might be a little rough -- or, rather, a bit rusty.

If it was the 1990s, you may recall a lot of potential, a groundswell of renewed pride, and local businesses starting to pick up the slack (and the debris) from the largely extinct steel industry.

Visitors today cannot help but be impressed by the way Pittsburgh has reinvented itself as a modern metropolis, bursting with high-tech companies, gastronomical delights and entertainment attractions.

Even Pittsburgh's nicknames have evolved along with the city's image, from the Birmingham of America to the Iron City to the Steel City to today's moniker, The 'Burgh -- you can just feel a younger, more dynamic energy emanating from new businesses, restaurants, stadiums and, yes, even golf courses.

Oakmont Country Club, host of the 2016 U.S. Open, might be a tough "get," but just outside of The 'Burgh in Midway you'll find Quicksilver Golf Club, one of the best public golf courses in Pennsylvania and former site of a Champions Tour event. Its rolling fairways and devilish greens are worth every bit of both the short drive and the reasonable green fees.

Playing a round at Quicksilver Golf Club

Quicksilver Golf Club hosted a Champions Tour tournament from 1992-1997. The 7,012-yard, par-72 course was also selected by golfers as Golf Advisor's no. 2 course in Pennsylvania and no. 35 course in the U.S. in 2014. Since its debut in the 1980s, it has been tweaked and renovated a few times, most recently by local hero Arnold Palmer, who flew in on his private chopper.

Today, with green fees in the $40-$70 range (including GPS cart), Quicksilver is a great value and an eminently playable track. The bentgrass fairways are generous though challenging, with lots of hilly lies. There are very few places to lose balls, if you don't count the lush rough, into which stray shots settle down and hide. The bentgrass greens are quick but very smooth and true.

From the tee, Quicksilver poses a few blind drives, like on the 568-yard, par-5 fifth hole. Rated as the toughest on the course, the hole provides no real aiming point off the tee and then runs steeply downhill to a tri-bunkered green. Find the fairway, and you can have a go in two; miss it, and you'll need plenty of time to search for your ball in the dense, bluegrass-rye grass rough.

The 200-yard eighth is a fun, sporty par 3 that plays from elevated tees down to a wide, shallow green fronted by water and backdropped by a ribbon of sand. Club choice is paramount.

Quicksilver saves the best for last, though, at the 424-yard closer, which plays downhill off the tee and then back uphill to a green set into a natural amphitheater right below the majestic clubhouse. There's even a miniature version of Oakmont's famed Church Pew bunkers on the right side of the 18th fairway -- though Quicksilver's pews are not nearly as penal as the ones at the U.S. Open venue (thankfully).

The layout has a strong collection of medium and long par 4s, with lots of variety and movement. The two short par 4s, however, are a bit tricked up: The 300-yard ninth plays straight up a severe slope, and the 349-yard 12th has a horseshoe fairway that is mostly blind off the tee and a green that slopes front to back and nearly impossible to hold, even with just 60 yards left to the green.

The pro shop is excellent, and, as noted, the clubhouse is a stunner. Take some time for a drink or meal up on the deck overlooking the course after your round.

Playing around in The 'Burgh

Speaking of drinks and meals, Pittsburgh was ranked by Zagat in 2015 as the top food city in America. You may be incredulous to hear this, but it makes sense.

Restaurateurs -- especially younger ones -- are often driven out of markets like DC, Boston, New York and Philadelphia by high rents and established, big-name competition. The 'Burgh is the next big city they run into, and the cost of living and doing business is a fraction of the East Coast hot spots, all of which are still within easy driving distance. And with a population full of university students and faculty (e.g. Pitt, Carnegie Mellon), and high-tech firms such as Google setting up shop in town, there's a steady clientele of adventurous, affluent foodies.

For breakfast, visit one of the six locations of Pamela's Diner, whose flapjacks (a hybrid crepe and pancake) are a favorite of President Obama. He enjoyed his meal at the Strip District Pamela's location so much that he asked them to cater a White House breakfast some years ago.

By the way, the Strip District is named after the strip of land it occupies, not something else, so it's family friendly. It's also full of exotic grocery stores, antique markets and intriguing shops. Follow breakfast with a lunch at Thin Man Sandwich Shop (a couple doors down from Pamela's), where you'll find sandwich combos you've never tried anywhere else.

For dinner, one option is the Market Square area, which has a bit of a European feel and houses no less than 13 eateries and bars. Expand your margarita horizons at Las Velas Mexican Restaurant with a cucumber jalapeno, mango cayenne or raspberry chipotle margarita. (Or, you know, try all three, because "research.")

If you end up needing a late-night snack, Primanti Bros. sandwiches are a Pittsburgh tradition. They put the fries -- and a whole lot more -- right on the sandwich!

Arguably the apex of 'Burgh dining can be found at the highest point of the city, up on Mount Washington. Take the Duquesne Incline -- an inclined railroad dating from 1877 and still running all day every day -- up the mountain and walk to the Monterey Bay Fish Grotto. Savor the outstanding crab cakes while you enjoy a sweeping vista of downtown Pittsburgh and the famed rivers that converge here.

Sports fans should avail themselves of tours of PNC Park (Pirates), Heinz Field (Steelers) and Consol Energy Center (2016 Stanley Cup Champion Penguins), along with the labyrinthine Western Pennsylvania Sports Museum, which of course includes an in-depth tribute to Arnold Palmer. Little-known fact: Pittsburgh is the only city whose major league sports teams all wear the same colors (gold and black).

In short, if your notions of Pittsburgh don't include gourmet restaurants, shopping, state-of-the-art stadiums, higher ed and great golf, do yourself a favor and visit. Historic Oakmont Country Club may be largely unchanged over the past decades, but The 'Burgh has been transformed.

For more information, go to visitPITTSBURGH.com.

Kiel Christianson
Kiel Christianson has lived, worked, traveled and golfed extensively on three continents. As senior writer and equipment editor for WorldGolf.com, he has reviewed courses, resorts, and golf academies from California to Ireland, including his home course, Lake of the Woods G.C. in Mahomet, Ill. Read his golf blog here and follow him on Twitter @GolfWriterKiel.
0 Comments
Related Links
More from the author

Kira K. Dixon
Lifestyle Correspondent
Now Reading
Quicksilver Golf Club: Play a round (and around) in the dynamic Pittsburgh area
New Cookie Policy
WE AND OUR PARTNERS USE COOKIES ON THIS SITE TO IMPROVE OUR SERVICE, PERFORM ANALYTICS, PERSONALIZE ADVERTISING, MEASURE ADVERTISING PERFORMANCE, AND REMEMBER WEBSITE PREFERENCES. BY USING THE SITE, YOU CONSENT TO THESE COOKIES. FOR MORE INFORMATION ON COOKIES INCLUDING HOW TO MANAGE YOUR CONSENT VISIT OUR COOKIE POLICY.
CONTINUE
Search Near Me