Boulders South a masterpiece of course design by Jay Morrish

The South Course at Boulders Resort near Scottsdale: An experience that transcends golf 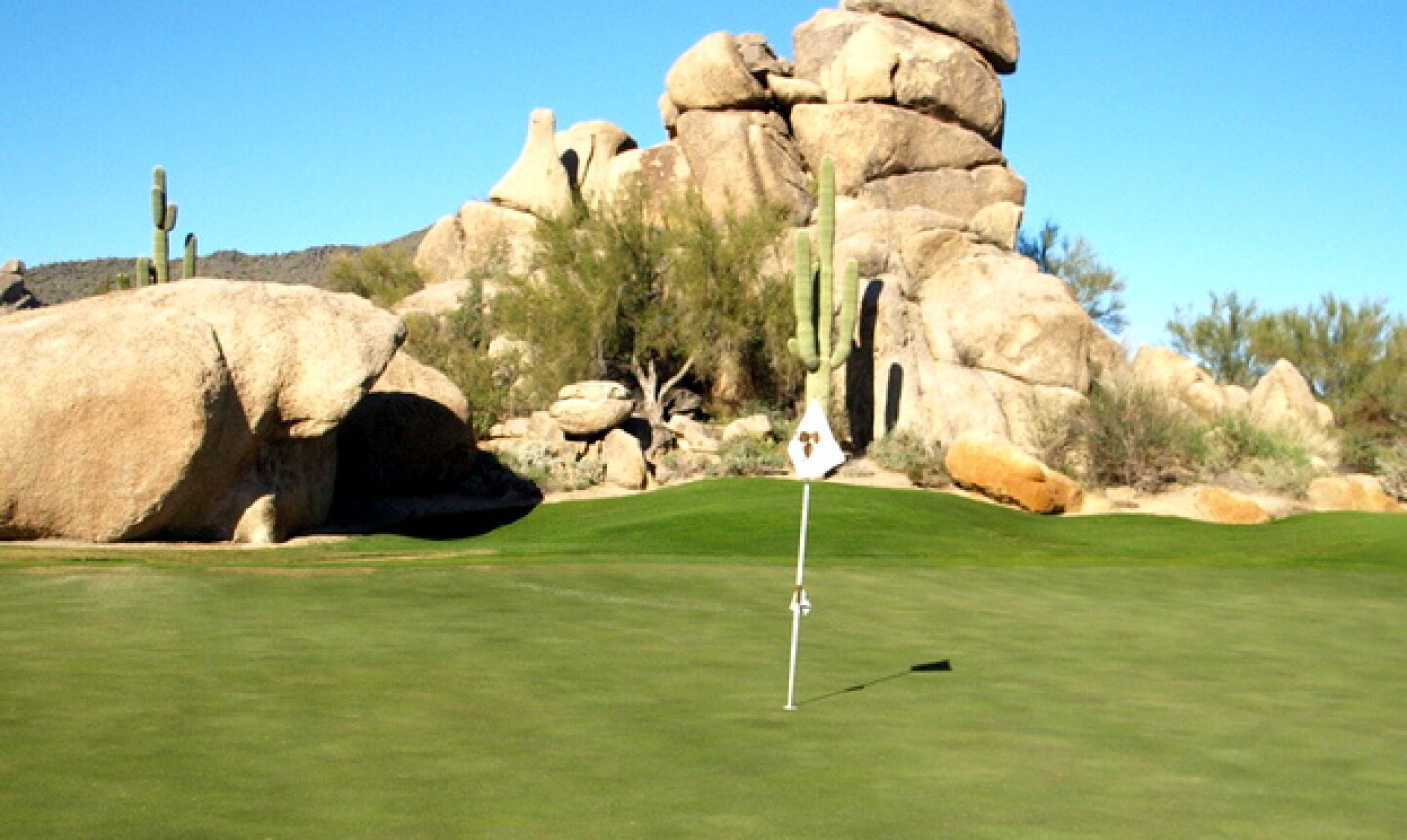 From the very first hole at The Boulders South Course, you get a pretty good idea what the course is all about. Mike Bailey/Golf Advisor 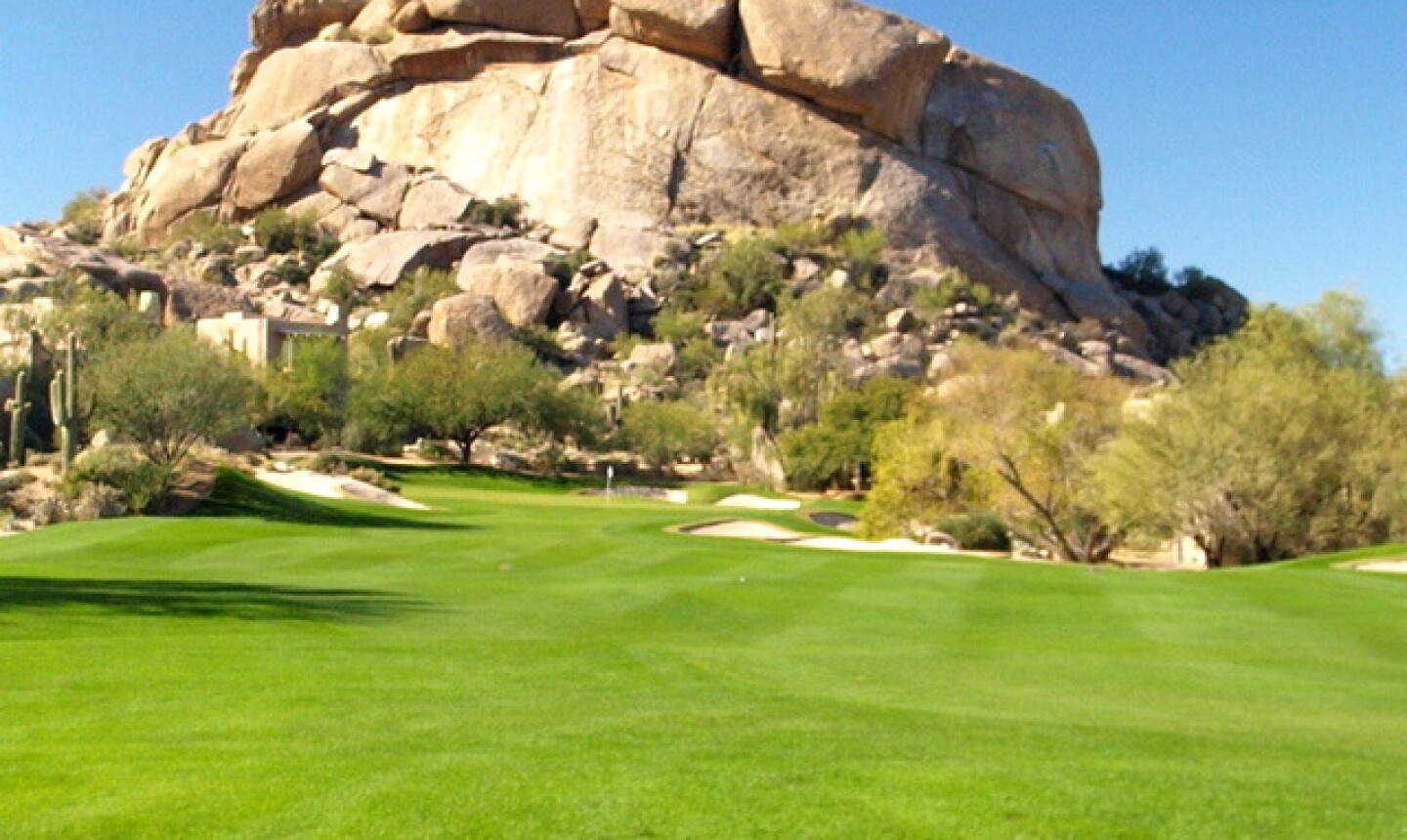 The par-5 fifth hole at The Boulders South Course in Carefree, Ariz., is known for its signature "Boulder Pile. Mike Bailey/Golf Advisor 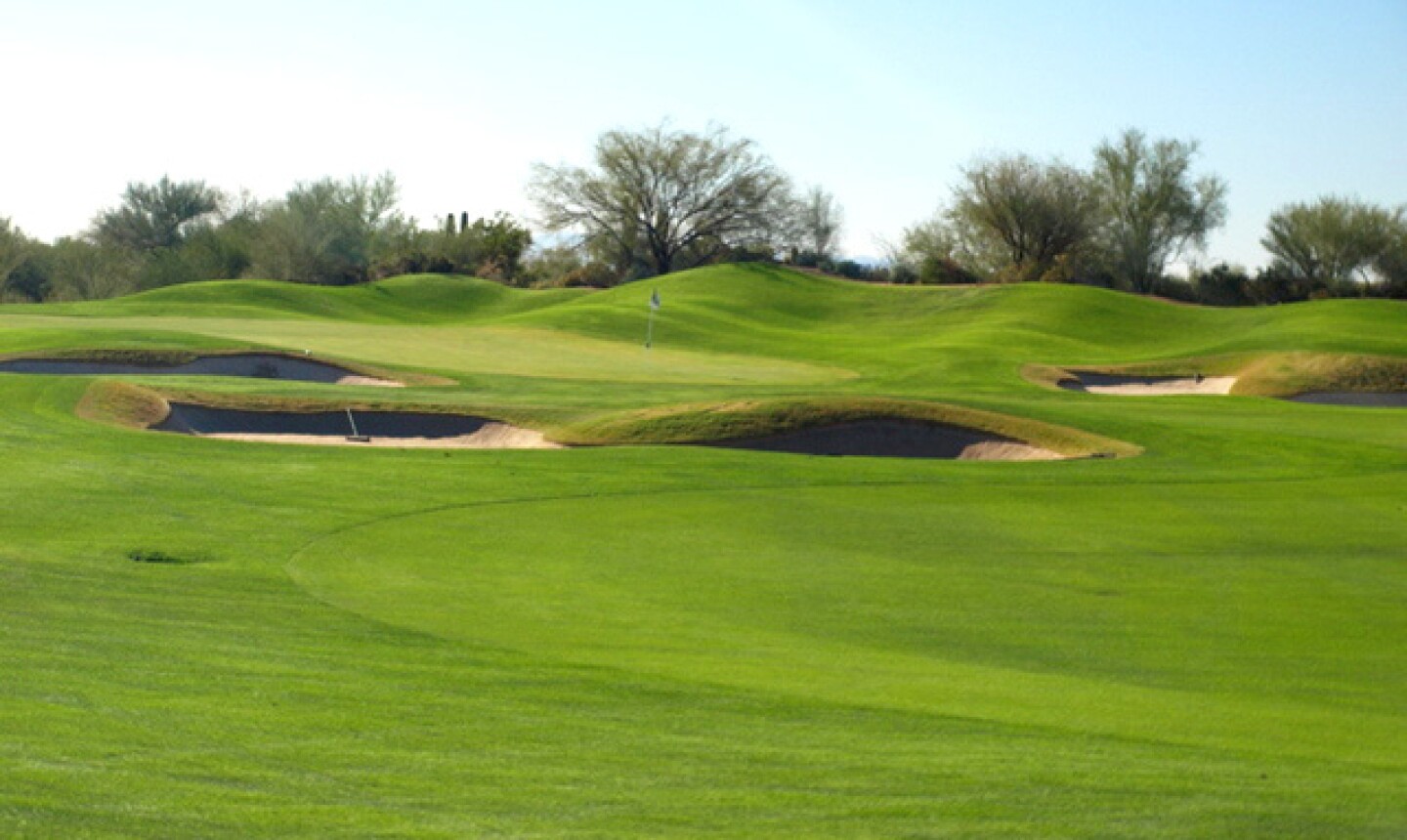 The Boulders South Course has fairways and greens as pure as any golf course in the Scottsdale area. Mike Bailey/Golf Advisor 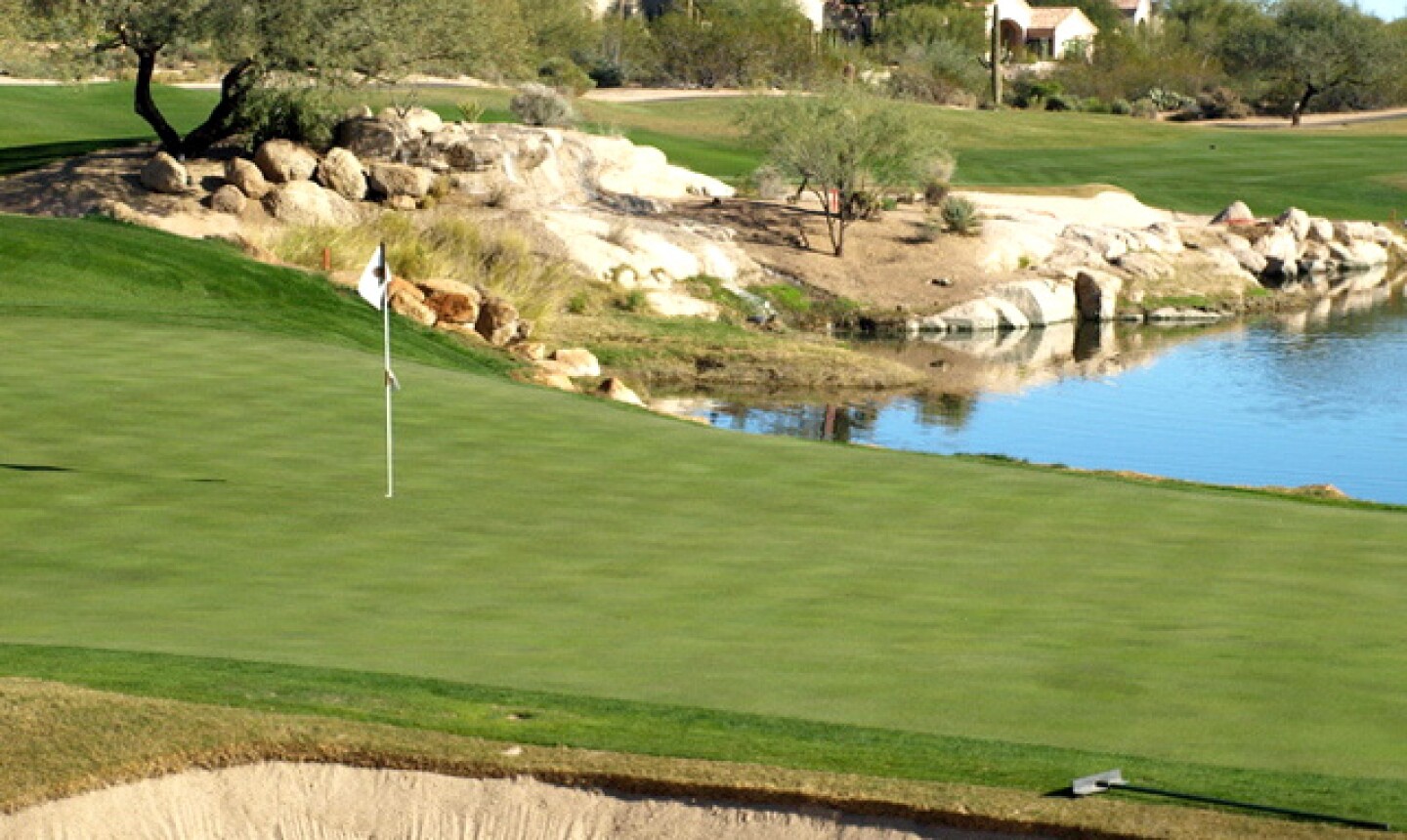 On the South Course at Boulders Resort and Golden Door Spa near Scottsdale, Arizona, designer Jay Morrish had to integrate a layout that held its own against - but didn't detract from - an incredible desert landscape.

CAREFREE, Ariz. - The game you are playing has been around for just a few centuries. It takes place largely on newly sprouted grass. The golf ball you placed on the tee came from a sleeve purchased earlier in the golf shop. Using your new Ping driver, you strike this new golf ball, which goes off the boundaries of this 25-year-old golf course - and collides with an object millions of years old. An object, by the way, that weighs thousands of tons.

Sounds like a science fiction movie, doesn't it? Wouldn't a photon torpedo from the Starship Enterprise be more effective?

These are the proverbial immovable objects, the landmarks that gave this splendid 36-hole resort its name and signature logo. It's a place unlike any other in golf - there can only be one Boulders Resort and Golden Door Spa.

And as you look for your golf ball, you can't help but think, "Long after I'm gone, perhaps thousands or even millions of years from now, that giant boulder will still be there, in the same position it is now."

It's almost sacrilegious to put a golf course on a landscape that was most surely sacred ground at one time. But if you did, you would have to pick an architect with the experience and perspective to pull it off, which is exactly what The Boulders did when it selected course designer Jay Morrish.

Morrish had an incredible canvas on which to draw his plans, both on The Boulders' South Course and the North Course , which he also designed. The rock formations that surround these holes will make even the most non-observant pause on occasion and reflect.

But make no mistake: These giant piles of granite are more than scenery; many are implicated in the design and will come into play. From the very first hole - a 447-yard par 4 from the tips - if you hit a drive too far down the left side of the fairway, you'll find yourself blocked out by one. You can try to hit a golf ball over it to the green with a wedge, but since the lie at this point is likely on desertscape, clean contact is no guarantee. Hit the boulder in front of you and there's no telling how high the number will be.

Perhaps the most striking site on the golf course is "Boulder Pile," which surrounds the 545-yard par-5 fifth hole. Reachable in two if you play the proper tees and hit a good drive to the left fairway, the green is surrounded on three sides by these rocks that rise some 200 feet above the surface. If you manage to hit them on a long approach shot, there's no telling where your ball may wind up, but if you play it as a three-shot hole and come in with a wedge, they shouldn't come into play.

There's also Rosie's Rock, named after the founder of the resort, Rusty Lion, near the seventh tee. It looks like it could tip at anytime, but it's been in that position for eons and isn't going anywhere.

While Rosie's Rock doesn't come into play - and many of the other boulder formations around the golf course are also ornamental - the course itself provides a great test. The South Course demands accuracy off the tee, because of the mostly tight fairways here. If you're spraying it, you're either ruining your clubs hitting off the small rocks in the desert or implementing the popular desert rule that's played in these parts.

The greens are fairly large, but have a good bit of undulation in them. There are also a few water hazards, most notably on the short par-4 sixth, where it comes into play off the tee, and the 583-yard, par-4 18th, where it fronts the green. And typical of Morrish courses, whether he did them by himself or with longtime partner Tom Weiskopf - there is a drivable par 4. In this case, it's the 12th, which plays anywhere from 237 yards to 348 depending on which set of five tees you choose to play.

The Boulders South Course: The verdict

In the winter, you're unlikely to find a golf course in better condition. Lush ryegrass fairways lead up to perfect bentgrass greens. And because of the course's namesake dotting the desert landscape, this is a course you'll never forget, making it a must-play for anyone who comes to the Phoenix-Scottsdale area to play golf, even if it does cost $285 to play in-season. (It's as low as $75 during the summer.)

Boulders Resorts' South Course is also a layout you should play according to your handicap. If you play from the tips - even though this par 71 is just 6,726 yards - you better have more game than just being able to hit it 280 yards-plus off the tee. You have to be accurate. Spending all day among the cacti, brush and small trees isn't a fun way to spend nearly three bills on golf.

Golf instruction at The Boulders

The practice facilities and range are just what you would expect from a world-class resort. The expansive driving range is plenty big for the largest groups, there's a large short-game area where you can hit 30-yard pitches, short chips or bunker shots and several putting greens convenient to both courses.

If you're looking to improve your game, you might want to look into The Boulders Academy, headed by top 100 teacher Don Crawley, a member of both the PGA of America and British PGA. The Academy offers private, one-on-one lessons, clinics, lessons tailored specifically for women and playing lessons. 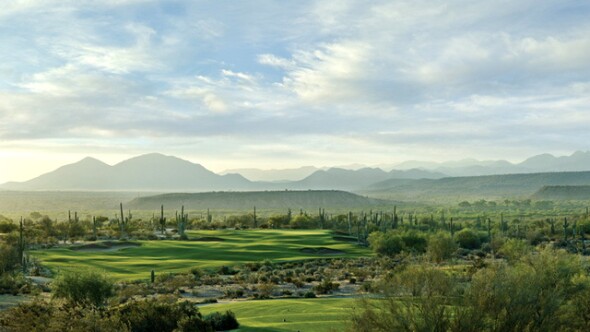 Tim Gavrich
Senior Writer
Now Reading
The South Course at Boulders Resort near Scottsdale: An experience that transcends golf
Search Near Me