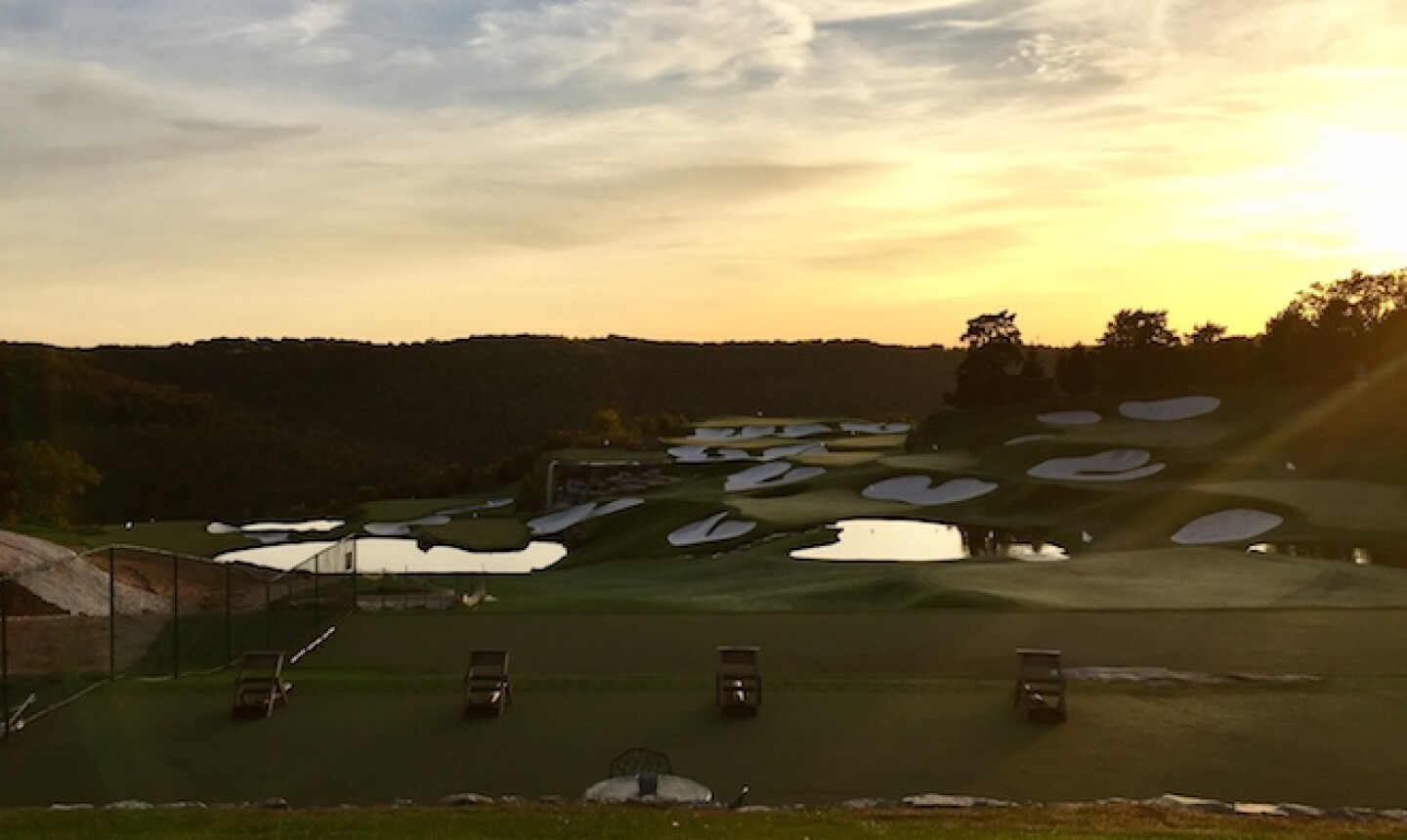 A driving range with water hazards? You can find it at Top Of The Rock.

It's been nearly a decade since the global recession prompted a massive slowdown in new golf construction. And in many places, including some of the biggest golf resort destinations, course numbers have contracted and continue to do so.

But one place - Branson, Missouri - is trending in the other direction. As announced last week, Tiger Woods' design firm, TGR, will be building a new course at Branson's flagship resort, Big Cedar Lodge, helping turn it into one of Middle America's biggest attractions for golfers and other outdoors enthusiasts.

We visited recently to scout the destination for Golf Vacation Insider readers. Here's what you need to know to get the most out of a Branson golf trip:

As Seen On TV...And In Person

Every year when the PGA Tour Champions come to town, Big Cedar Lodge takes center stage. Owner Johnny Morris, who founded Bass Pro Shops, is seeking to make the resort the jewel of the Midwest, and not just for golfers. Morris is a billionaire and a savvy marketer, so we're betting on his success. When we visited Branson late last fall, we enjoyed the resort's current 27 holes: the 18-hole Buffalo Ridge Springs (née Branson Creek) and the 9-hole Top Of The Rock.

Top Of The Rock took center stage this past weekend, and despite some rainy weather, gave the home viewer a decent idea of its splendor, though believe me, it is stunning in person. It is a feat of engineering, with massive boulders framing many terraced tee boxes and greensites. That said, it is eminently playable right down to the final hole, which presents a wonderful vista of nearby Table Rock Lake.

You'll be hitting mostly short irons and wedges at Top Of The Rock, but the huge, multi-target practice range, designed by Arnold Palmer, is one of the coolest you'll ever see.

Buffalo Ridge Springs is an excellent Tom Fazio design which serious golfers will likely prefer to the more novel Top Of The Rock. When Morris bought the course, then called Branson Creek, he added some signature touches. Elaborate and well-disguised manmade water features abound, though they are naturalistic, rather than tacky. The sound of rushing water is soothing either way.

Buffalo Ridge Springs' back nine begins and ends at the rim of a valley, where Tiger Woods' new course, Payne's Valley, will open sometime in 2019. Also visible from those Buffalo Ridge Springs holes, across said valley: the new Coore & Crenshaw-designed Ozarks National, which will open in 2018 on the site of a much-maligned track originally called Murder Rock. Also coming soon to Big Cedar: a 13-hole par-3 layout designed by Gary Player.

Big Cedar is the big name in Branson golf, but the savvy visitor would do himself or herself a disservice to overlook the area's other golf offerings. Branson Hills (formerly Payne Stewart) Golf Club, for its part, mounts a worthy challenge to Buffalo Ridge Springs for the title of "Best Branson Golf Course."

The course is the work of Chuck Smith in collaboration with Bobby Clampett, and puts up quite a challenge. Knowing where miss shots is absolutely crucial, as many holes have both drop-offs and gathering contours beside fairways and greens. The 18th hole is one of the longest and best par fours we've seen anywhere. It climbs some 60 feet up to the green, meaning a closing par feels like a birdie.

We also toured LedgeStone Country Club while in Branson, a course with a number of unique holes that dart up, down and across some wild terrain. Lesser architects would have built a weird, overly punishing course on this site, but Tom Clark did a wonderful job giving players enough room to miss and a sensibly spaced array of tees. Two dramatic drop-shot par threes here - the third and the 15th - caught our attention in particular.

There are a lot of golf courses out there that are par 72 for little reason other than the popularity of that number; that it's fashionable. As a result, there are a lot of awkward par fours out there that would be better off as an extra par three. In Branson, architect Bob Cupp built a rare par-64 layout, called Thousand Hills, that flies under many golfers' radars, but is a fun, worthwhile golf experience that will take you no more than three hours on most days.

With nine par threes, eight par fours and one par five, the course represents an enlightened attitude toward golf: a big, varied set of par threes plus some compelling longer holes will engage open-minded golfers on a smaller-than-normal tract of land. Long one-shotters like the tenth and 17th would rank among the tougher holes on most "big" golf courses, and they add balance to Thousand Hills. And the ninth and 18th, a par four and a par five, respectively, are excellent holes in their own right, too.

For the most part, the courses in the Branson area have a type of grass called zoysia on their tees and fairways. If you're unfamiliar with zoysia and play most of your golf on Bermuda or rye or bent grass, here's what you should know about this surface:

Beyond that of an up-and coming golf destination, Branson enjoys an interesting dual reputation. To many, it is a mecca of live music, as locations like the Lawrence Welk Theater, the Pierce Arrow and Legends in Concert play host to all manner of musical acts and variety shows. There are many other indoor attractions, including a museum devoted to the Titanic, the World's Largest Toy Museum Complex and the History of Fishing Museum. Shops, themed restaurants and a massive Bass Pro Shops location.

It can be kitschy as all get-out if you want it to be, but Branson is also a big destination for outdoor pursuits beyond golf, as well. Fishing, hunting and ziplining comprise a just a few of the possibilities. All these recreational activities beyond golf make Branson an especially attractive family destination.

If the rapid expansion of Big Cedar Lodge is any indication, it is safe to say Branson is poised to become a much more prominent golf destination in the coming years. We will certainly be keeping a close eye on it.

Have you taken a Branson golf trip? Share your thoughts on the golf and attractions in the comments below!

I have played all the courses in Branson numerous times. My favorites in order of preference are Buffalo Ridge, Ledgestone, Branson Hills, Thousand Hills, Holiday Hills and Point Royale. The Top of the Rock par three course is a novelty to play once. It has gorgeous holes with extraordinary views but with a $135.00 green fee for a nine hole par three, once is enough! The Branson area has so much to offer. That is why it is my favorite vacation destination and as a golf destination it will only get better with the addition of all the courses Johnny Morris is building and planning.

I'm fortunate to rep the area's golf destination, and I can say that it's got an excellent mix of courses. There are brawny, testing player's courses; player friendly shorter courses; flat courses; hilly courses; expensive courses; less-expensive courses. Best of all is that there will be three more courses opening in the next three years, barring unforeseen circumstances. That will bring to one-half dozen courses that have been added in the last five years.

I have played Buffalo Ridge (used to be called Branson Creek) and it is one of my top 5 courses I have ever played. And now they also have courses by Crenshaw and the old Payne Stewart Course is awesome too. When Tiger gets his course finished, it will be one of the best Midwest Golf trips out there.

I played Branson Hills at the end of March. I really enjoyed the course layout and hope to get back again.