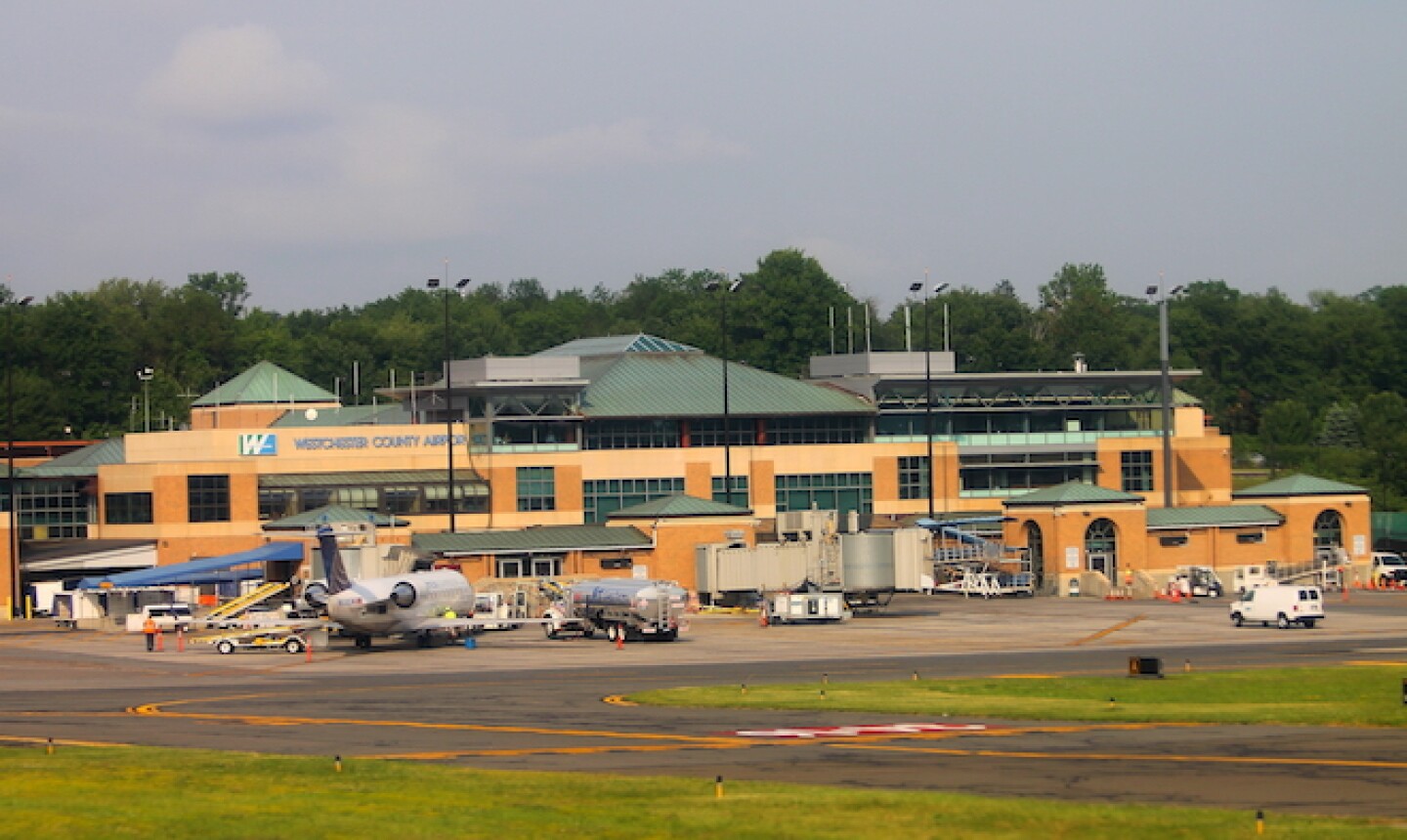 The design of Westchester County Airport (HPN) reminds more of a train station than an airport.

So, you're planning a golf vacation, and you're going to be flying to your destination.

Your first instinct is to fly to and from the biggest airports near a) where you live, and b) where you're going. That's sensible, but possibly misguided.

In our experience, you will probably be better off looking for one of numerous smaller, regional-scale airports close to home or to your destination.

Especially if you're a golfer and will have your clubs in tow, these smaller, best-kept-secret airports have some major advantages over their larger, busier counterparts, including:

Sure, huge international airports can be great for people-watching, but if your main goal is to get in, get out and get to the golf course or hotel, the smaller, secondary hubs are well worth what is usually a few extra dollars to investigate. Plus, they may even be closer to your eventual destination than the more obvious airport.

Not only that, but the planes that fly into these smaller airports tend to be those swift, quiet jets that I like because a) there's no danger of being stuck in a middle seat, and b) it takes much less time to board and deplane a CRJ jet than, say, a Boeing 757.

Also, to access these airports, you'll want to look into airlines like JetBlue, Allegiant and Spirit, which are using these alternate spaces to compete with American, United and Delta. That can mean an easier experience and cheaper fares.

Where I live in Florida, my main airport options are Orlando (MCO) and Palm Beach (PBI), each about 90 minutes from where I live. MCO is nice, especially for a big airport, but all things being equal, I'd prefer to fly out of PBI most every time, especially if I'd have to connect to my destination from MCO anyway. MCO is nice, but almost every time I fly in and out, the Disney-visiting crowd is almost always a hindrance - unruly kids and fatigued parents are not a great combination for fellow travelers.

Actually, there are a couple Florida airports I think are even better than PBI as a potential alternative to MCO, especially for golfers coming to the Sunshine State to play some golf. I'll share them, and other alternative airports to popular golf destinations, below:

Traveling to: Orlando
Instead of: Orlando International (MCO)
Fly here: Sanford (SFB; 30 min to Orlando), Melbourne (MLB; 75 min to Orlando, 45 min to Cape Canaveral)
MLB is as quiet as airports get, partly because its only main connecting airports are Atlanta (ATL, via Delta) and Charlotte (CLT, via American). It's generally a little more expensive to fly in and out, but the ease of access makes it worth it for travelers who value peace and quiet in the airport. SFB is a little north of Orlando, and it serves dozens more cities than MLB, mostly via the budget carrier Allegiant.

Traveling to/from: New York
Instead of: LaGuardia (LGA), John F. Kennedy (JFK), Newark (EWR)
Fly here: Islip (ISL, 60 min to Times Square), Westchester (HPN, 45 min to Times Square)
HPN (located in White Plains) is usually a breeze to get in and out of, owing to its diminutive size and the trademark energy-driven (but still friendly) New York efficiency the staff exudes. Its website looks like it hasn't been updated since 1997, but trust me, it's a good alternative to the New York Metro-area mega-hubs, even if it takes a little longer to get into the city from HPN. Bonus: If you live in the New York area, HPN serves multiple Florida spots directly, as well as Nassau, Bahamas. If you're aiming to tick Bethpage Black off your bucket list, in particular, ISL is just a half hour to the famous muni, and much less hectic than JFK or LGA.

Traveling to: Central Wisconsin (Kohler, Sand Valley, etc.)
Instead of: Milwaukee (MKE), Green Bay (GRB)
Fly here: Appleton (ATW; 90 min to Sand Valley, 80 min to Kohler)
ATW is another Allegiant (as well as United and Delta) destination, and with the much-anticipated opening of Mike Keiser's Sand Valley Resort project soon, it's a perfect access point, being closer than GRB to that area by about 20 minutes. Also, it may be 20 minutes farther from Kohler - 80 vs. 60 minutes - than MKE, but it's much easier to get in and out.

Traveling to: Myrtle Beach
Instead of: Myrtle Beach (MYR)
Fly here: Wilmington, NC (ILM; 50 min to Ocean Ridge Plantation), Charleston (CHS; 85 min to Pawleys Island)
Myrtle Beach's airport is relatively small in its own right, though it did receive some much-needed updates a couple years ago. But given that it can be pricy to fly in, you may be better off flying into another airport. And if you're going to be playing mostly North Carolina-side courses, ILM may be closer than MYR. If you'll be focusing on the Pawleys Island area, Charleston's airport is a legitimate alternative. It's about 20 minutes farther, but it's a pretty quiet airport and you can save a lot of money by flying there over MYR.

Traveling to: Southern California (Los Angeles area)
Instead of: Los Angeles (LAX)
Fly here: Long Beach (LGB; 30 min to Pelican Hill, 45 min to Monarch Beach)
LAX is well-known as one of the world's busiest airports - that's the trade-off for the huge number of cities it serves. But if you're looking to try and capture some of the laid-back vibe of Southern California from the moment you land, LGB may be where you need to go, especially if you're ultimately headed to great SoCal resorts like Monarch Beach and Pelican Hill.

Traveling to: French Lick, IN
Instead of: Louisville, KY (SDF)
Fly here: Evansville, IN (EVV;80 min to French Lick Resort)
French Lick Resort is one of the Midwest's best old-line resorts, but it's not the easiest to get to from afar. Both SDF and EVV are about 80 minutes from the resort, but coming from Evansville is an easier trip from a much quieter airport, served by Allegiant and the "Big Three" domestic carriers.

Traveling to: Phoenix/Scottsdale
Instead of: Phoenix-Sky Harbor (PHX)
Fly here: Phoenix-Mesa (AZA; 40 min to Phoenix)
There are dozens of courses for all budget and type of golfer in the Phoenix/Scottsdale area, from luxe resorts like The Boulders to less-heralded sleepers like Papago Golf Course. AZA is a fraction of the size of PHX, and is an Allegiant hub. Nonstop flights to Mesa are available as far away as Cincinnati, Ohio and Grand Rapids, Michigan. Fair warning: the airport is in the eastern portion of the area, so you might be in for a bit of a longer drive if you're staying in, say, the Glendale, Peoria or North Scottsdale areas.

Traveling to: Streamsong
Instead of: Orlando (MCO), Tampa (TPA)
Fly here: Tampa/St. Pete (PIE) Ft. Myers/Punta Gorda (PGD), Sarasota/Bradenton (SRQ)
Streamsong is one of the best recently-built winter golf destinations in the U.S. It does require a bit of a drive after a flight, no matter which airport you use to ultimately access the resort. MCO is about 90 minutes away, with TPA, PIE, PGD and SRQ all between 70 and 80 minutes away. The latter three are all smaller, quieter airports, so if you can get reasonable airfares to any of them, I like them as alternatives to the bigger hubs.

Traveling to: Southern Wisconsin - Lake Geneva
Instead of: Chicago-O'Hare (ORD), Milwaukee (MKE)
Fly here: Rockford, IL (RFD; 60 min to Lake Geneva)
The main Lake Geneva resorts - Grand Geneva Resort & Spa and Geneva National Resort - are about an hour from both MKE and ORD, but the smaller RFD airport may be your best option, especially if you want to avoid big-city traffic on your way out. Rockford serves a number of warm-weather destinations, too, making it a decent potential alternative airport of origin for Chicagolanders and souther Wisconsinites.

Traveling to: Boston, Cape Cod, Newport
Instead of: Boston (BOS)
Fly here: Providence, RI (PVD; 60 min to Plymouth, MA)
If you're looking to experience coastal New England this summer or - our recommendation - autumn, Boston's Logan Airport seems like a natural choice. But PVD may prove the better choice, especially if you're looking to check out Cape Cod or Newport, or even the Connecticut casino resorts at Foxwoods or Mohegan Sun.

What are your favorite smaller airports, particularly near major golf vacation destinations? Let us know in the comments!

When we went to myrtle beach we took Southwest out of Bradley into Charleston. Oh by the way, clubs fly for free and like you mentioned easy access to rental car area and drop off was a snap.

Orange County, CA in Newport Beach for So. Cal and San Diego

Your article is fine with some assumptions that cost is not a factor, time is not a factor, and that airlines always run on schedule. It always costs significantly more to connect to a regional airline. Why connect to fly to a smaller airport when you can fly direct to a larger airport without the layover connecting time delays. When the small airport with the single source regional airline experiences delays with the 2 to 3 flights per day, you may even have to stay into the next day to rebook. The large airport with multiple flights and airlines offers alternatives to canceled flights. Business travelers know to avoid connecting flights like the plague, I would listen to their tips first. Just fly into the large airport in the morning and play golf that afternoon. Also, you left Southwest Airlines off your list, have you ever flown Spirit Airlines?