What I would expect for the price

Well rounded course with a mix of target golf and straight away bomb it holes. Course starts off with some non-driver position holes then builds up to some tight and lengthy holes. Tees, greens and fairways in good shape. Bunkers were a little rough but they have been taken care of. Lots of unrepaired ball marks on greens which isn’t the courses fault but the clientele’s. Repaired many every hole. Played on a Saturday early as a twosome and never waited. Will play again when in the area.

Hadn't played in over 10 years as I live in Northern Virginia. Course was in really good shape. Greens sneaky fast. Groups in front of us were not fixing their ball marks so we fixed them. Pace of play was slow & no marshal. Took us 4.5 hours. Maybe next time I won't sign up for Friday morning.

Quite a nice course; hidden gem

The Bridges is a hidden gem of a golf course. The greens and fairways were cut very nice and were both in great condition. Nicely cut fairways can e distinguished from the rough, which many public courses don't have.
The layout is very pretty with a variety of straight-away holes , combined with dog legs. Greens were in 'A' condition.

Played in a bad dry spell and course was in great shape. Nice layout greens were true. Just say yes and play it.

You MUST Play Here

The greens had been aerated on Sept. 23rd and it was still noticeable, on Oct. 9th, but not prohibitive. Additionally, there was a chemical type odor at the greens and there was a gritty feel to the ball after you would putt and some gritty residue on the putter cover if it was on the green. I assume it was some type of fertilizer applied with or after the aeration.

The maintenance of the course was the best I've seen in PA in years.

I can't say that there were any "breathtaking" vistas and I can't really think of a "signature" hole, but every hole was very nice. The fellow in the pro shop, when I told him that I'd never been there before, said that the course is pretty straight forward, what you see is what you get.

I believe that someone from the maintenance dept. goes around with sand and fills divots on every tee box. And, I actually saw grass growing out of many of the sand divots.

The regular golfers must do a good job repairing ball marks on greens... or... they don't get enough good golfers that make ball marks. Greens were fast.

It had rained on Tuesday night into Wednesday morning and the course, especially before noon, was damp and the ball did certainly make marks when landing on the greens. I think it would be unusual, although possible, that a maintenance person may repair ball marks before play in the morning. I've never heard of such a thing. I'm just trying to figure out why the greens didn't have un-repaired ball marks.

All bunkers were edged, had no weeds, and were tractor raked earlier in the morning.

There were no patchy areas on tee boxes, and there was no crabgrass on tee boxes, fairways, fringes, greens, or rough, with the exception of some type of grass weed well off to the right or left of the normal area of rough. And that grass weed either was treated and dying or dying due to the cooler weather. It would certainly be the golfers fault (and I was there a couple of times) to be that far off line.

On top of all of that, the Senior Rate for this time of fall was $27 before noon, cart included. How can they afford to keep the whole course nearly immaculate at those rates?

If I did not live 1 hr. 25 min. from the course, I would be there very often. However, I will not hesitate to return.

Course is in great condition compared to last couple of years. Some challenging greens, variety of holes, and strategically placed hazards keep the game interesting. It's beautiful setting and great restaurant keep me coming back.

I rated the course in August 2018 as 4 stars, but had some concerns. However, back today on a clear, beautiful (but crisp) morning, and the course was in excellent condition...warranting 5 stars. Green and lush--fairways, rough, and surrounding environmental areas--and the fairways were like hitting off carpet. There were a couple of wet places, but they were near the cart path or off the side in the tall rough...shouldn't be in play (but, for me, were a couple of times...ugh). We followed a men's league, but they moved quickly and left the course after hole #12. We breezed around, and then had a great lunch in the grill. All staff are friendly and helpful, and the course is and always has been one of my favorites. A great layout, excellent conditions, and welcoming staff...not to mention a great price.

Even after the deluge and days of rain the course was simply amazing!

Even after the deluge and days of rain the course was simply amazing! Great Job Bridges for making an outstanding course!

I haven't played The Bridges this year and finally got a chance to get up there (1 hr 20 min drive). The course, from the clubhouse, looked green and lush. And, many of the fairways were beautiful; however, the course was extremely wet and some fairways had wet ruts, brown spots (no grass), and thinning grass. It wasn't consistent, so there were some really good fairways and some not so good. The greens were fast and, for some reason, hard to read. They also had some splotchy patches on some of the greens. Frankly, I was surprised by the damage/bad places, as The Bridges is typically always in good shape regardless of weather. I will continue to go back, but I think I'm going to wait until it dries out some.

Conditions Good
Value Excellent
Layout Good
Friendliness Good
Pace Excellent
Amenities Good
Difficulty Fairly Easy
Comment
Response from The Bridges Golf Club on 08/24/2018:
Hello, thank you for the four stars! We are thrilled to hear that you enjoyed your round of golf for the most part. Thanks for the feedback, and we look forward to seeing you again soon.

Nicely designed parkland course. No homes lots of mature trees. Starts with a short par 4 and finishes with a good par 5. Only drawback is the sand in the bunkers needs to be replaced. Otherwise really enjoy this course.

My group has done an annual trip for a decade here. The course lay out is really enjoyable with only 2 and 5 being potentially "gimmicky" nonetheless they are surrounded by 16 other challenging holes. The course appeals to myself as a single digit handicapper but is also very playable to high handicaps and beginners. You won't score your best round if you aren't hitting it solid, but you also won't lose 2 sleeves of balls either. Greens have always been up and down, but even at their worst they are worthy for the price. This year greens were fast and pretty free of balls marks. Play is often quick and the staff has been historically friendly. Certainly recommended. Even if you have to drive an hour or so. You shouldn't be disappointed.

If I could rate this course any lower I would. This is by far the worst course I have every played in my entire life. The layout is horrendous and the course conditions are not much better. The fairways consist of dirt with a few patches of grass, and the rough is mud. Every green is a different speed, and the staff places pin in the middle of slopes. The ball does not roll on most greens, as it bounces about 3 times every 3 feet. Furthermore, every putt and chip reacts a differently if hit the same way. There is not a single pleasurable hole on the whole golf course, and most holes take pure luck to make a good score on. If you are trying to shoot a somewhat reasonable score on a fair golf course DO NOT play The Bridges, spend your money elsewhere.

I'm a single digit handicap and have had some of my best rounds at the course. Not a private course by any stretch. But not as bad as depicted above.

This is a well-designed course on a rolling piece of property with lots of the namesake bridges over wetlands and a meandering creek. Only a few holes have significant water hazards. Lots of up, down, and sidehill lies on the fairways along with undulating greens make for an interesting round.

The greens reportedly were severely damaged last year. They are much improved this year. They are playable, but there is a tremendous variation from green to green and even on some individual greens. Speed ranges from fast to downright slow. Grass color varies from dark green to light green on the same green.

Fairways are in good shape.

Not a walker's course. Lots of elevation changes, and significant distance between some greens and the next tee. Carts are gas powered and in average condition.

I look forward to playing here again, but not this year. Maybe next year.

Played here once before a long time ago and wasn't impressed. Not the case this time.....the fairways, greens, bunkers ....all in excellent condition. The posts from 2015 about green damage due to a harsh winter were true, but they've been fixed and are in excellent shape. A visually pretty course with lots of trees, elevation changes, and a few ponds here and there. A challenge for every level. Pro shop staff wasn't very friendly at all. Starter was very helpful. Pace of play was terrible and there was no one out on the course to move it along.

I've played this course before and was looking forward to the excellent track on Memorial Day weekend. I was so disappointed when we started playing and the greens we all dead. I was told they lost them over the winter, it would have been nice if we were warned while making the tee time. So now I'm warning you, don't play here until maybe the fall of 2015.

they charge top dollar and then don't mention that they are aerating their fairways? inexcusable, especially on a blustery autumnal day. never again.

A Must Play in South Central PA

Course conditions are typically very good here with slightly above average green speeds (relative to other courses in the area). Greens can be tricky depending on hole locations. Layout is very nice especially from the back tees.

Restaurant has good food at reasonable prices as well. They often have live music on the deck on weekend evenings as well which is nice.

My father and I drove 2 hours to play The Bridges and we were not disappointed. The course was in remarkable condition and we had a fantastic day. While the course offered plenty of space off the tee, the greens were quite difficult to figure out. If you are a walker, the course is setup beautifully for it with almost all tees close to greens. 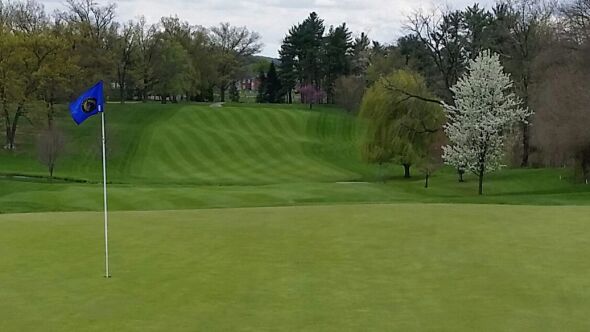 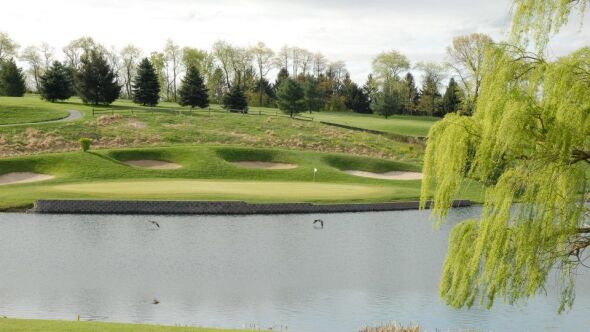 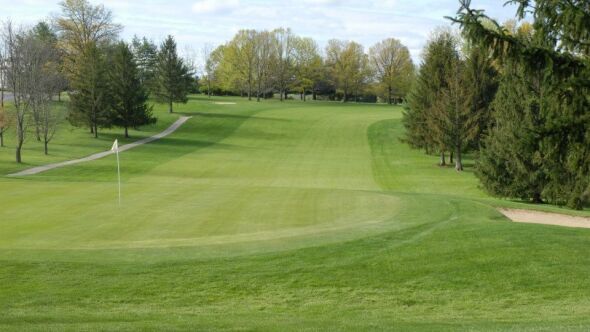 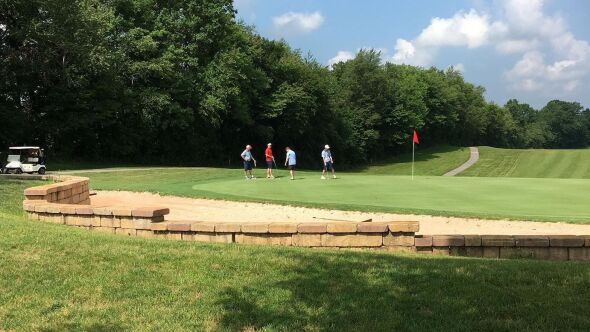 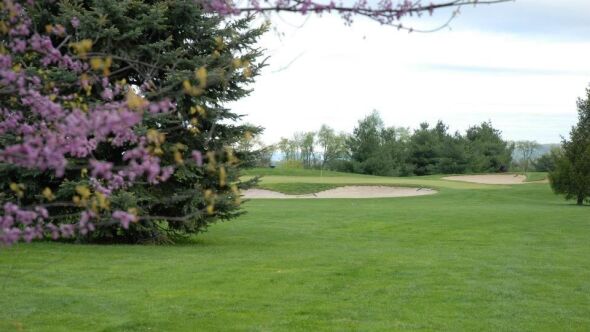 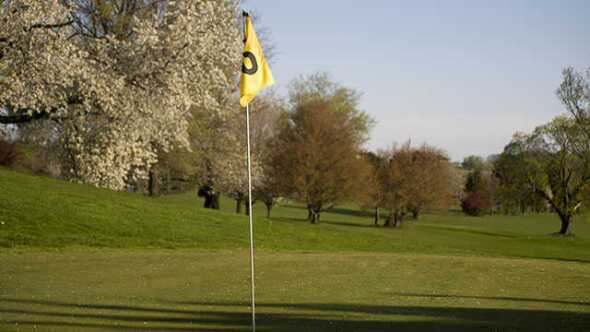 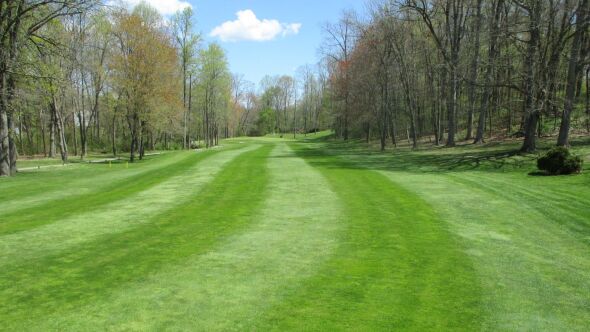 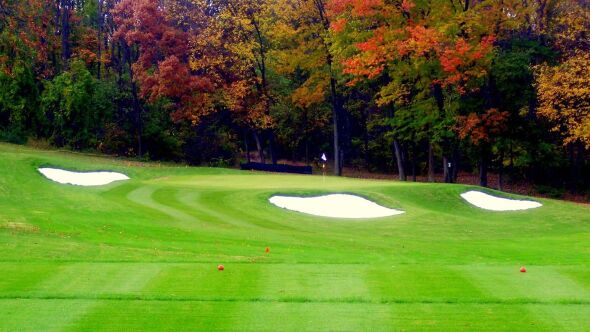 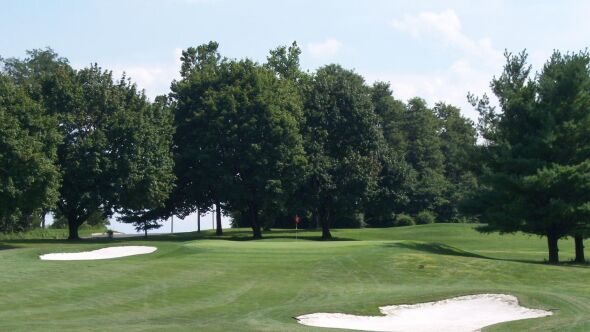 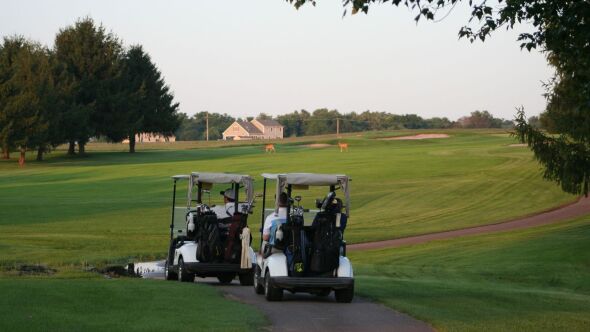 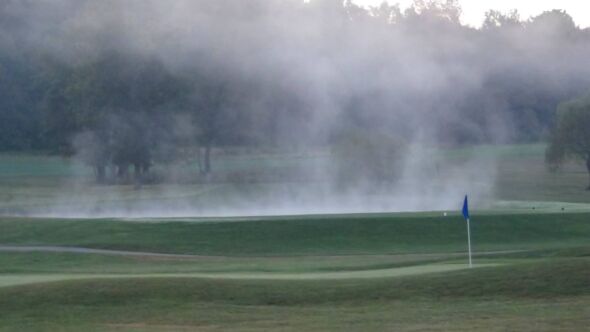 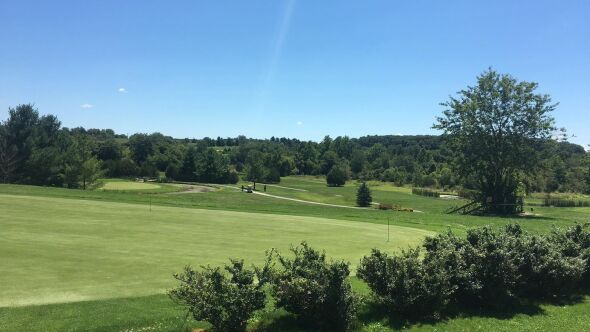 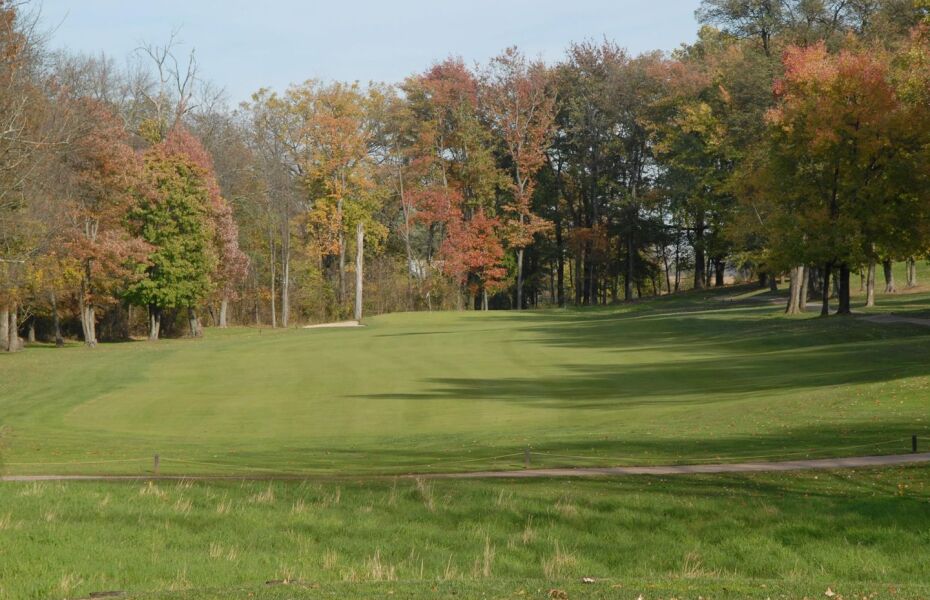 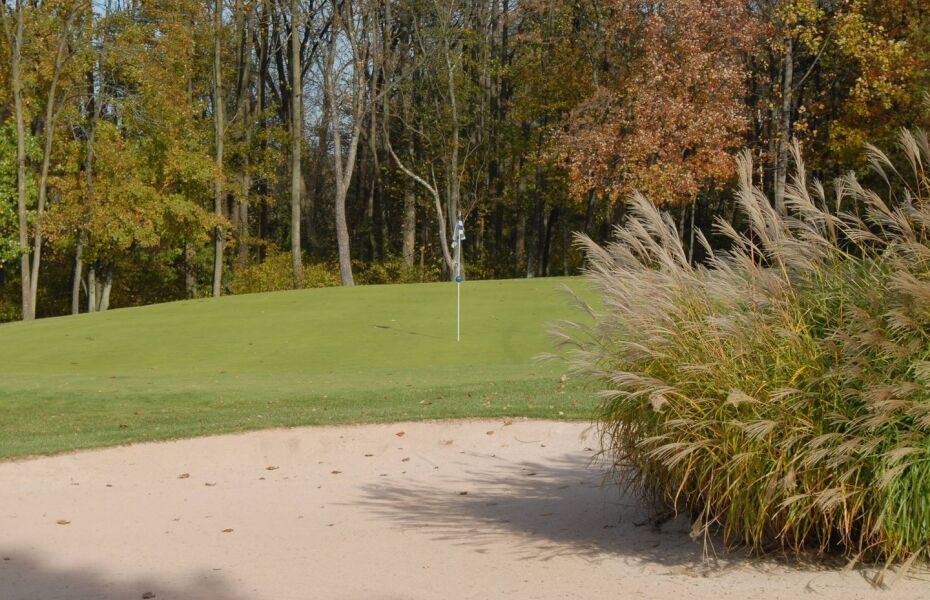 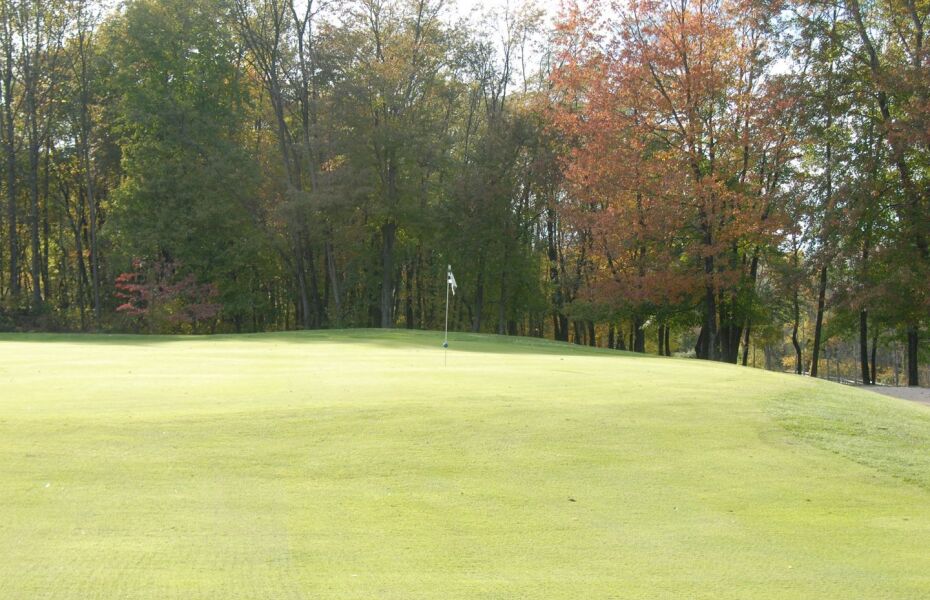