I booked Binghamton golf trip for me and my sons through Conklin Players Club (another fantastic course). En-Joie on Friday, Hiawatha Landings on Saturday and Conklin on Sunday. We were at En-Joie only two weeks after Dick’s PGA Champions tournament and only two days after greens aerated. I didn’t detract from course condition rating because greens were fine (and easier) and aeration necessary to keep greens healthy. The gentleman in pro shop was extremely friendly and the starter went out of his way to be helpful and instructive. Two great ambassadors for the course. A beautiful and very challenging course (somewhat tamed by aerated greens as approach shots would stop on a dime and allowed attacking of pins). A very memorable experience for me and my sons. Totally En-Joieable!

Worth the 3hr drive

Five stars all the way. I’ve dying to play this course for some time. It was well worth the wait. The dicks sporting goods tournament was played the weekend before so the course was in flawless condition-Lucky me.
I have No complaints at all. Greens were lightning fast and true, fairways and impeccably lush. Food was delicious at the restaurant and the staff friendliness well above expectations. Special shout to the starter Tim who made me feel very welcome from the time I walked in from the parking lot. What a good dude. Thank you

So I drove 3 hours to play Conklin Players Club and En-Joie near Binghamton, NY. I wish I had skipped upstate NY, and gone directly to Atlantic City or someplace else with some superb golf.

Let me start with the course. The 12 holes I played were really nice. Great conditions from tee to green. I'm a little confused how this place hosts a Senior PGA event and used to hold a PGA event. Don't get me wrong, it was nice overall, but not something that I would consider "Tour worthy". And definitely not something I should've traveled 3 hours to play

Fairways are tight, but not so tight that you can't miss a little. Big misses will get you in trouble, and you could end up on other fairways with a lot of trees to impede your progress. Placement is key on a lot of holes because of the big, full trees that line and hang over the sides of the fairways. If you're in the wrong spot, you can have an awkward shot to the green.

The biggest downfall of this course for me, was the pace of play. Just brutal. We zipped through the first 7 holes in an hour and 15 minutes, only to catch up to a senior women's league that was incredibly slow. They teed off an hour before us, and there were no other groups between us and them. We went from playing at a nice pace, with nobody coming up behind us, to suddenly waiting 10 minutes for each and every shot, and waiting at the tee box with the group behind that caught up to us. 10 minutes isn't an exaggeration and might even be generous on some holes.. On the 11th hole, there was a foursome on the green, a foursome about 70 yards short of the green, my group, and then another group on the tee behind us. We waited 10 minutes for the first group to finally finish their putts, only to wait another 10 minutes for the next group to finish their putts. It took us 30 minutes to play the 11th. That's not OK. I personally watched one of the women take 12 strokes on a hole. At some point you have to pick the ball up.

The Ranger was no help either. When we alerted him to the issue, with a bit of an attitude, he said that we would finish our round in the appropriate time. He then drove off sort of shaking his head like he was annoyed we brought up the slow play issue. He was kind of right about how quickly we would finish the round though, because I walked off the course after the 12th hole. The round would've easily taken 5.5 hours had I stayed out there. That's just not fun. Would've loved to see all 18. Holes 8-12 took just under 2 hours to play. 5 holes in 2 hours? That's unacceptable. I understand this league is filled with regulars, and the ranger is probably in a tough spot telling regulars to pick up the pace, but that's his job... To make sure things are running smoothly on the course. If he's not doing his job, it ruins the experience of others playing the course. Had the guy in the pro-shop and the starter not been so nice, my "Staff Friendliness" rating would've been a 1.

I've played with all sorts. From beginners, to scratch golfers, and I've never seen such slow golf in my life. Even the beginners I've played with, know to pick up their ball at some point if they're taking too long.

I'd love to recommend this course to people, but after the experience I had, I can't imagine telling anyone to go there. Majorly disappointed in the experience.

I’m sorry you caught it on a bad day. I had a totally different experience with great pace of play (4 hours).. Since PGA BC open ended, players driving distances have skyrocketed. I agree the course might not work well for the regular PGA tour, but the pro tea boxes are fine for the senior pros

We always wanted to head up to Endicott to check out where the seniors played the Dick Spoorting Good’s Open, and we we’re glad we did. Don’t be fooled by the Go-Kart looking facility on the outside with the green dinosaur logo, this place is legit. Course was in such great shape. I loved the layout. The rough was just that, rough. Gotta keep it in play. It’s a challenging course from the tips, pro tees weren’t available to play. $60 on a Saturday, well worth it. We will definitely be back! Do yourself a favor, go check this track out.

Bertoni8
Played On 08/25/2019
Reviews 11
Skill Intermediate
Plays Once a week
I Recommend This Course
4.0
Previously Played

I love this course- was a member when I lived in the area 20 years ago, and course conditions are what I remembered and enjoyed. But if you’d like to buy a beer- bottle of water or a hot dog, you’re going to be outta luck.

We arrived and put our clubs on a cart, that hadn’t been even rinsed since the last group used it (my cup holder was a cigar ash tray). Staff inside were friendly as always—- i just have a hard time coming to grips with the fact that a course of this caliber is so short on the basics of clean carts and any sort of amenity (that you would think would just generate more revenue...?)

Can't say enough about the course conditioning. It is in pristine condition, with thick, deep rough and excellent fairways, tees and greens. Current work includes restoring water features and replacing retaining walls - which will further enhance this outstanding golfing experience. What a value - golf as it should be.

Excellent layout, pristine conditioning. Doesn't look like much from the street, but once on the course it is 5 stars all the way. Great greens, tees and fairways. Excellent grounds maintenance. Highly recommended.

Course is really nice and open, greens are well cared for. You will find your ball off the fairway (unless you are in the very deep rough) and while you may have a shot off the fairway, the strategically placed trees make it a real challenge every time. The only negative point that I have is the snack bar/restaurant. Granted we were there early in the season and so they may not have been fully stocked but the food options and quality was lacking. Having said that, i'm going to play this course again and again.

Despite living about an hour away from En-Joie I had never played it until recently. I've played the Links at Hiawatha and Conklin numerous times. Why I waited so long to make the drive up is beyond me. This is an excellent course from hole 1 through 18. It's as traditional as it gets. Each hole is framed perfectly. The conditions for early spring were fantastic. The greens rolled true, the bunkers were in great shape and the tee boxes were pristine.

I really don't get why this course doesn't get more respect. Binghamton in general has some really good public courses and this one is the best of the group imo.

A group of 12 played this course as part of a two day tournament. This course was great, well conditioned, bunkers galore, narrow tree lined fairways and fairly quick greens.

I liked this course a lot, it was not tricked up at all and it is a traditional course in every sense of the word.

Two things were disappointing: 1, the bathroom behind the snack stand were disgusting and can only be described as filthy.

The service in the restaurant was slow to the point of almost walking out.

The golf course itself is great!!

The is one of the most hidden courses ever. Although they had the BC Open for years here; and now the Dick's sporting goods Open, this course still doesn't get the respect it deserves. The course is sneaky hard. A long par four there, a water hazard there. The fairways are very narrow. Don't be deceived with the drive into the course. Although this course is in a not so nice neighborhood, it is a great course. One of the only downfalls about this course is that the driving range is not on site of the course.

Being new to this whole golf thing it took us a while to play all 18 but the staff was very accommodating and made it a great experience. Well layer out course with good challenges along the way.

The course was absolutely perfect and beautiful. Fun. 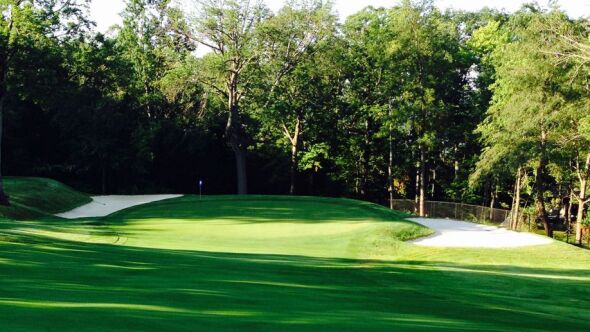 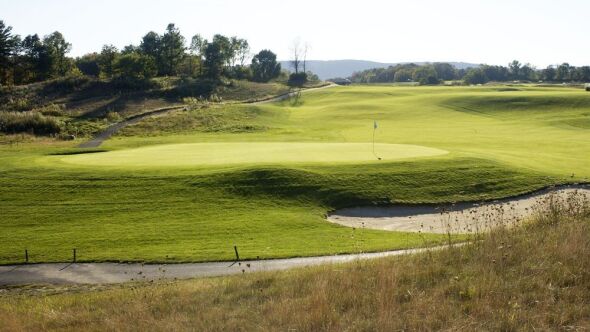 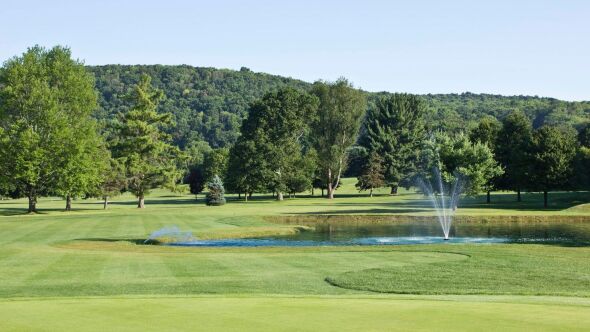 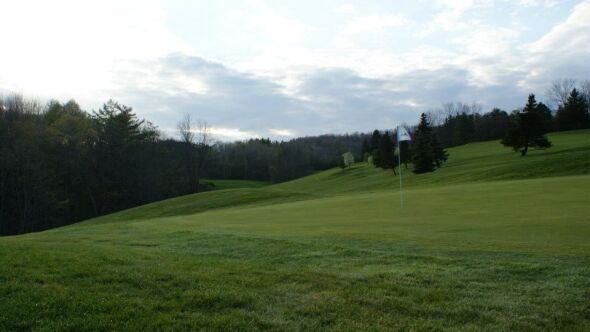 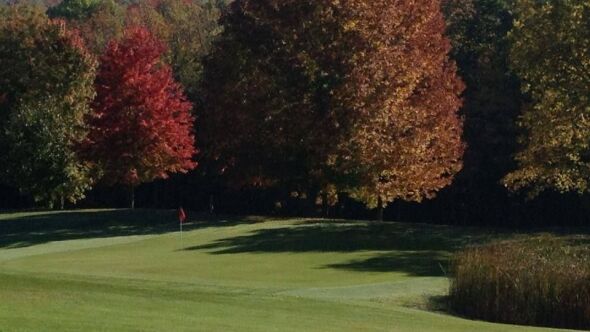 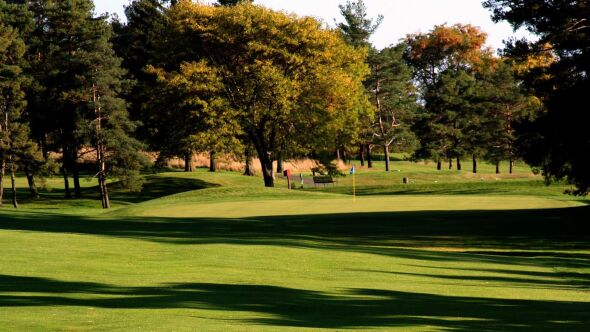 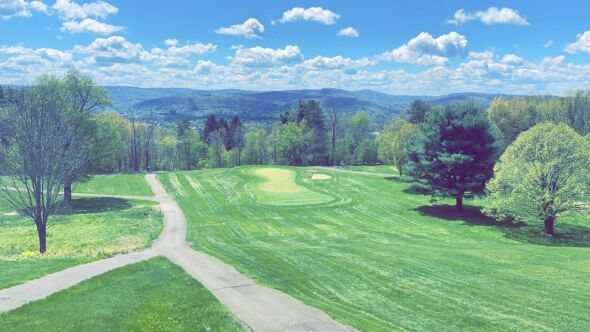 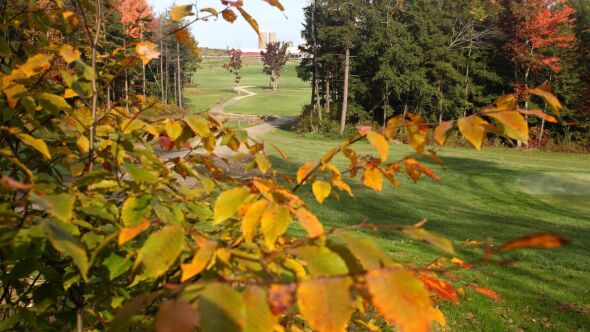 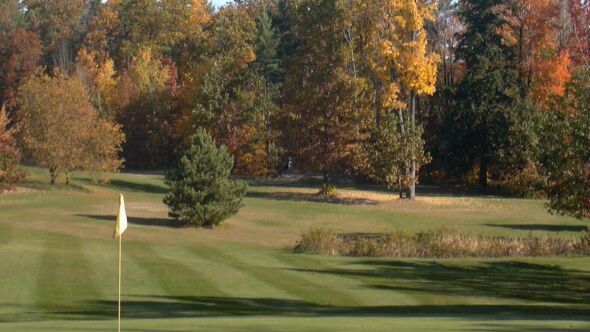 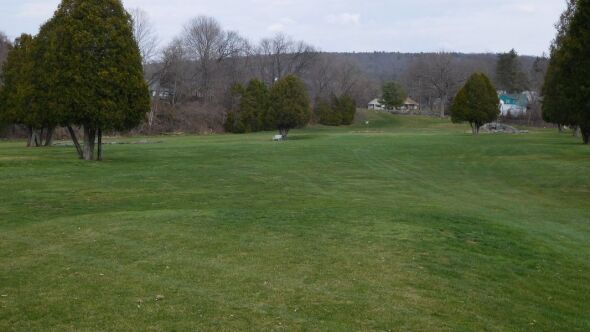 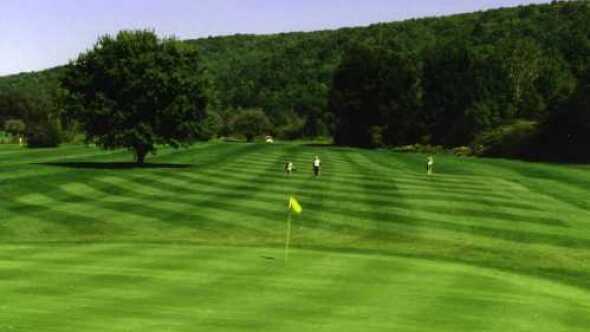 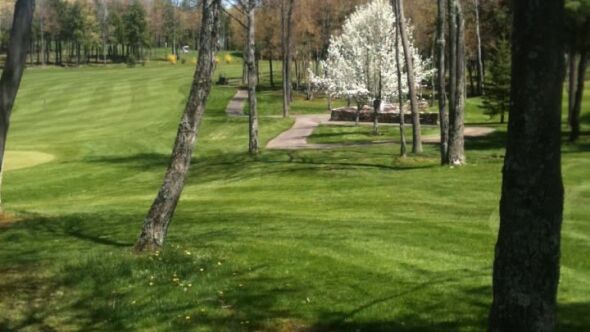 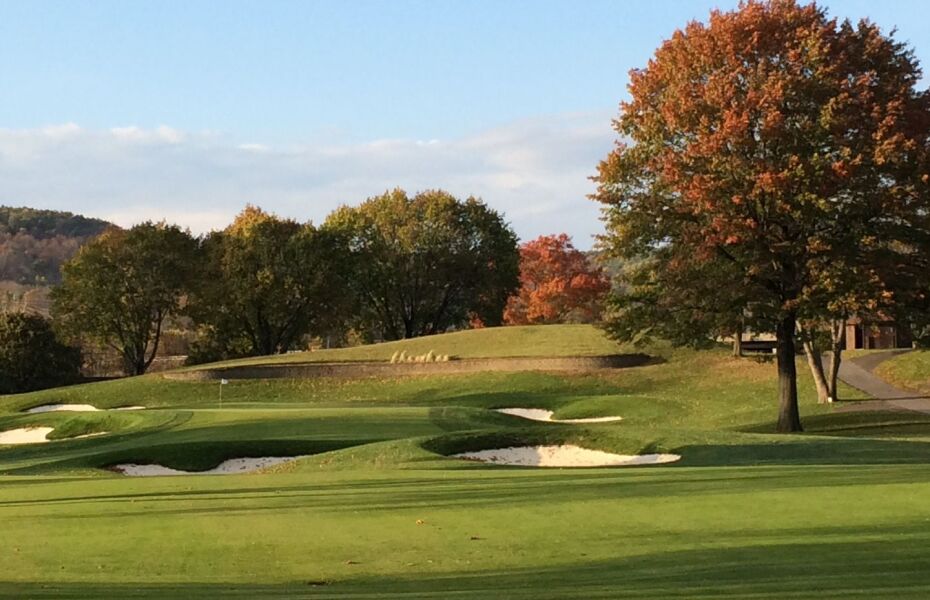 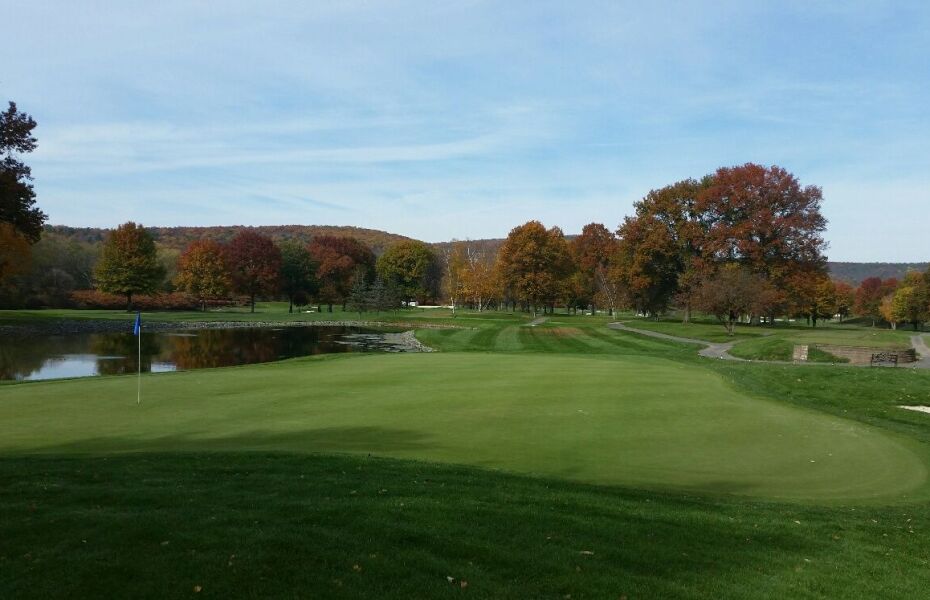 A view of the 7th hole at En-Joie Golf Course. En-Joie GC 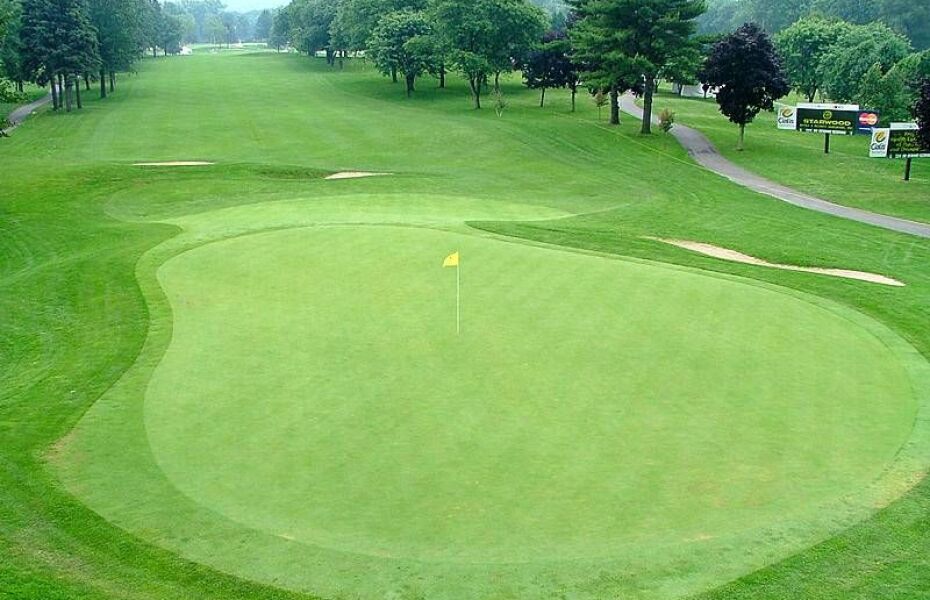 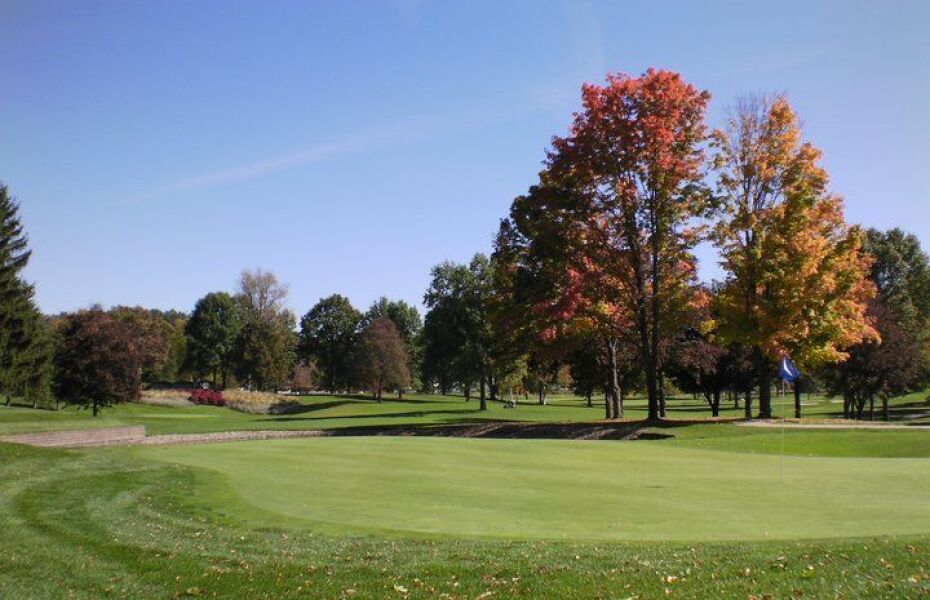 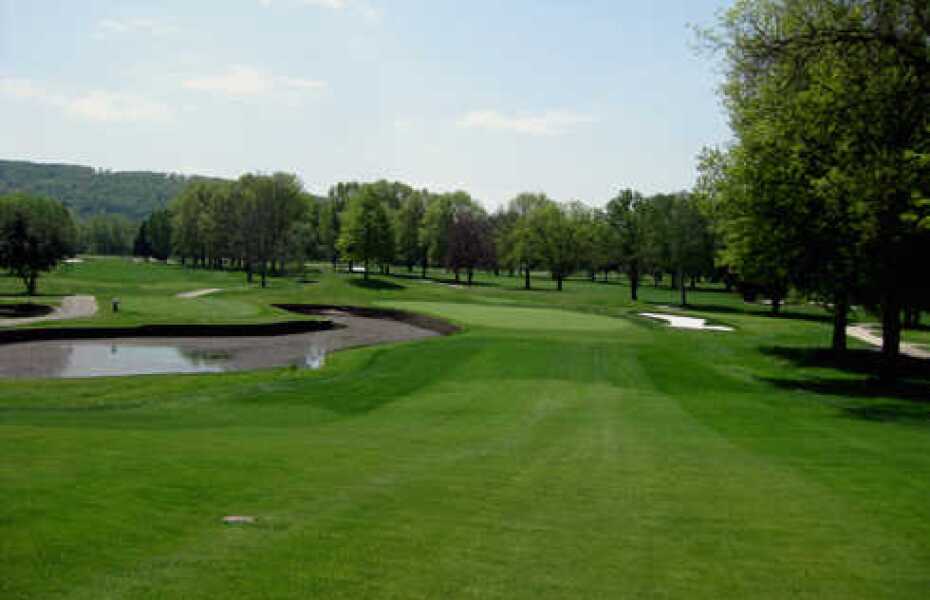 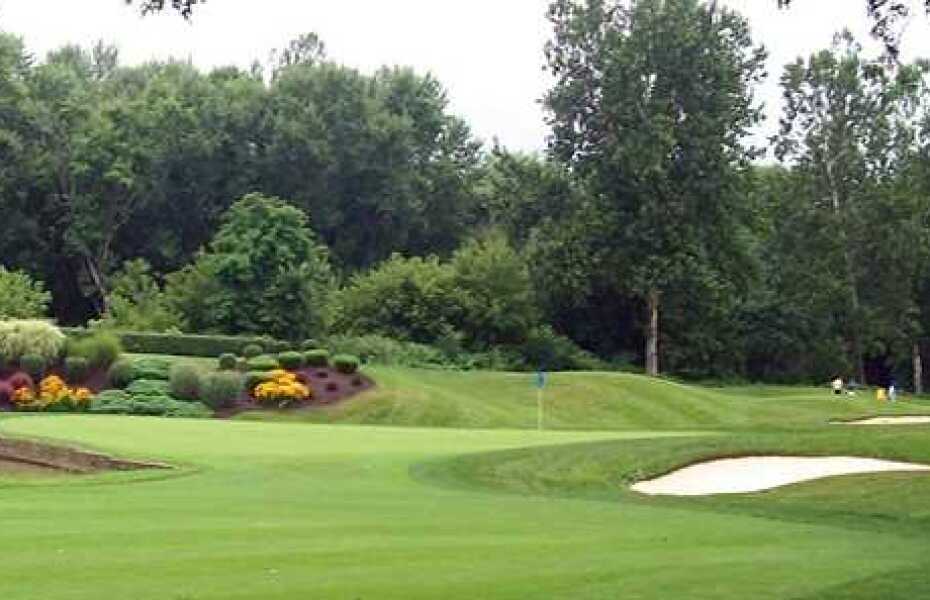