The 19th Hole is Great For:
Drinks 8
Patio Dining 6
Course Challenges Include:
Elevation Changes 13
Forced Carries 12
Bunkers 10
This course/club is great for:
Wildlife/ Scenic Views 9
Advanced Golfers 8
This Course's Location is:
Worth the Drive 8

Course was in great shape. It was cart path only due to overnight rain so somewhat of an inconvenience. I was sorry to hear they want to go private next year. It was the public that supported them last year when the course was in rough shape. I hope the current members don't mind their annual dues being doubled.

There are still open spots to join the club...you should consider it. It's far better now that it's private.

Two hour delay from a storm two days ago. All other corses around here did not have delays.

Every year this course gets worse and worse.

Those days are over… some problems are related to the public players that do not have access to members tee times.

Especially now as a private club… these problems and your participation will not be an issue.

Very nice course on Level of Lake of Isle and CT National would return. Only complaint was there was no on course cart service on a Thur Afternoon.

The course is beautiful but the course management was not good. So many groups were waiting for cart.

Only had one issue

Arrived 2 hours before tee time to warm up, wasn’t actually able to start until 40 min after tee time. Carts for thin and far between to obtain. Everything else was excellent.

XrJtSa3nkvpAPFvXSkO4
Played On 10/16/2021
Reviews 1
Skill Advanced
Plays Once a week
I Recommend This Course
5.0
Previously Played

Challenging and Only Getting Better.

I’ve been playing Fox Hopyard for over 7 years and have also initiated and run many Chamber & Rotary events there. There has been a strong commitment to course upgrades and course management. They have made improvements every year not only with the course, but also the facilities and professional staff.

The investment in the property and hard work of their staff has been so successful that the club will be going private in 2022. The course has the rare ability to be fun for the high handicap player and challenging for those in the single digits. The fairways are tight and the greens are skinny or wide and contoured.

Bring your “A” game and go for it… but be careful, this Fox bites back!

Course in great shape. Punishing but fair. Miss the greens and the rough around them is thick and hard to get out of. Pins tucked near fringe on many holes so when I missed, chips out of the rough with no green to work with was extemely tough. My fault not theirs. Pace was slower than I'd like. Think we came after a scramble and things got slow especially late. Some of tee blocks need repainting. Hard sometime to tell which tee was which. Overall a good experience. Want another shot to make amends for a disappointing scoring round.

I have played this course many times over the years. Normally, one of the best tracks in New England. Greens were furry and slow. When I inquired about the greens, I was informed that they had been aerated 7 days ago, though I did not see any evidence of that (late in the year for aerating). No aeration alert when I booked.
Much of the rough was very long.. Always a search for the ball in it. Very difficult to hit out of. Was a 5 hour round waiting for the groups ahead of us, probably from everyone searching for their balls.
I will certainly play here again., but only after doing my due diligence about conditions.

Almost all the way Back!

Was able to book a round on GolfNow for a good deal. Paired with 3 others. Good guys. We teed off at 1140 got done at about 440. A little slow but nothing crazy. Greens were a little slower than I’m used too there but def almost as good as they were before the power outage. Great time of year to play as the leaves are starting to pop. Will go back.

This is a fantastic course. Excellent holes, views and conditions. Don't like slow pace of play, carts that completely shut off if you go in a restricted area, carts need to be in too early when is is still light out.

Stuck behind a 4some slowing down play, playing multiple balls, and giving lessons for the full 18.

No ranger, no one checking on the course.

The group in front of us went home after 9 holes because they were so slow!

Spoke the assistant manager at the clubhouse after and he told us he couldn’t do anything because we played the full 18. So we were shamed for not calling and complaining, and also for playing the course that we payed to play.

too bad A slow group of women two ahead and a slower group of old men were in front of us. A single came up to us on the third hole. We let him go through. When we finished the 3rd hole, the single was waiting on the 4th tee. The old men were still putting. 15 minutes later, we said, lets play as a 5some and if it opens up we will let you go. We kept up to the old men as a 5 some till the 16th hole. A ranger came to on 16 and said people behind us were complaining we were a 5 some. we split up 3 and two and continued to wait every shot through 18….

We teed off @150 and @5pm right now we’re only just finishing 12. It’s absolutely horrible playing behind a group of 5 who don’t know proper golf etiquette. No ranger.

The high quality of the layout at Fox Hopyard seemed to supercharge the proceedings today, as only the very best courses I’ve played earlier this year have done. This is an exciting, enjoyable, top-notch layout, excelling in design quality, setting, and playability. The Hopyard occupies the same echelon, I think, as Jay Peak of Vermont or Omni Mount Washington (at Bretton Woods) of New Hampshire, both of which have been ranked #1 by Golfweek in their respective states for 2021. It’s also a spectacular looking track. I’ve played here a couple of times in the past, and walked away, then, feeling about as I did today: more than impressed. The fly in the ointment on this occasion, though (I’m sad to write), was slow play, which docks the overall rating by a star. But I’ll be glad to return and give this course another go.

Fox Hopyard isn’t a gentle course, running up and down, as it does, through unspoiled woodlands, intimidating with several forced carries, and challenging you through imposing hazards on every hole. But it is a fair one, even considering that it slopes as high as 136, because the strategically placed bunkers aren’t overdone, and there is enough width on most of the fairways such that they seldom feel claustrophobic.

The par-threes:
All are very good, but the toughest may be long sixteenth, which, without the use of water, makes the most of greenside terrain and bunkering (that is hardly low-key). Eight demands a carry over water and features what may be the course’s best defended putting surface. The fourth, however, stands as one of the best par-3’s in Connecticut. No description needed; just look at the photo.

Three and fifteen, two great par-5’s.
Among all the par-5’s, I’m most partial to the clever third, with its blind second shot to a troublesome layup zone and a well-fortified, plateau green. But the fifteenth is its equal, a 567-yard stunner that challenges, off the tee, with its tight landing zone, then virtually forces a layup on the second. The raised green complex is superb.

A quartet of great four-pars:
The second is a tough, uphill par-4 of 409 that concludes on a bunker-fronted plateau, and 17 is an equally tough, longer version of this one (but without a corridor of woods). Then there’s seven. This hole may be criticized, fairly enough, as a difficult target hole, but I like the use of water to the left and long in its landing zone; then at green again. It demands a well-struck drive, then a pured iron to find the green--no shuffling on this one. The ninth could be the course’s best four-par by virtue of its elevated, hard-to-hold green. But it’s a bit sinister.
The closer: this 551-yard five-par will be for most players a 3-shot hole; you’ll need to be a long and very straight hitter to intelligently risk going for it in two from the deeper tees. Even the lay-up is not without risks, so calculate carefully. But eighteen also manages to be a subtle hole that demands precision and finesse into the green--no small feat.

Conditioning;
To complain is to quibble. The maintenance staff does an admirable job here.

Playing experience:
Had a great time with my playing partners. Played with the friendly and personable Brendan, who hits the ball a ton. We were joined for several holes by a couple of other pleasant guys and good golfers.

Design Strengths:
Certainly, Roger Rulewich, who is best known for his long-time work with Robert Trent Jones, Sr., seems to have taken his sense of direction on this course from Jones, who is counted among the greatest masters of the last century. Here, there are a few excellent risk-reward holes, along with outsized bunkers sprinkled liberally around fairways and greens, a few sizable water hazards to steer clear of, and several greens set upon big plateaus. And like Jones, Rulewich everywhere shows his unerring judgment. Above all, the holes are varied throughout: each par-3, for example, is quite different from the others. Better still, uphill and downhill holes vary in severity, directional movement, and the use and placement of key hazards: the course’s rhythm, fortunately, never runs like clockwork. Most every green complex here is strong, too, and these vary widely by their bunkering and mounding, chipping zones, green shapes and side slopes, as well as slopes on the surfaces themselves.

You’ll often be forced to pitch the ball when you miss a green, which invariably puts pressure on your short game. The long and short of it: I felt little (if any) repetition and experienced no boredom as I played my way around these eighteen. What was constant, however, was the sense of challenge on nearly every shot.

Some conclusions:
Too bad the golfers we played behind here, much of the way, paid little heed to the 40 second or Ready Golf rules, nor spent 3 minutes or less looking for their errant shots. I’ve never seen the need, either, to stand around watching your putt for thirty seconds after you hit it. Pick it up, move on. In any case, Fox Hopyard needs a marshal.

None of this changes the fact that the layout is easily among the most precisely designed, high quality courses I’ve played in Connecticut. Every hole has its virtues. It seems wrong to dub Mr. Rulewich merely an acolyte of Trent Jones, for his sense of style is his own, and what he does is done with flair.

Over 5 hours to play……no ranger in sight…..won’t play there again 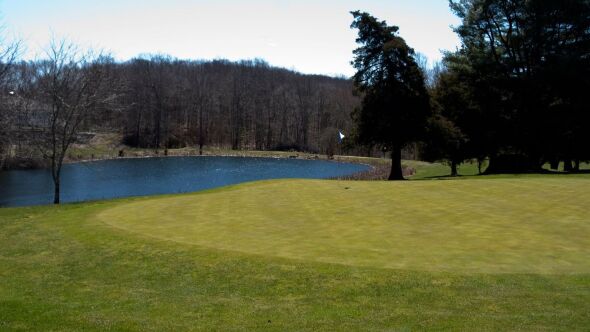 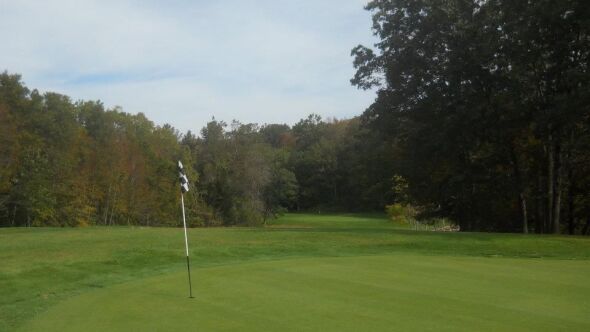 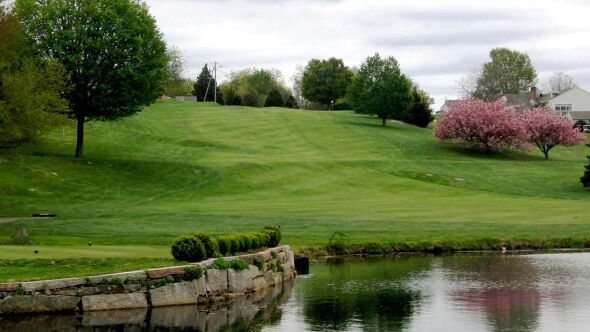 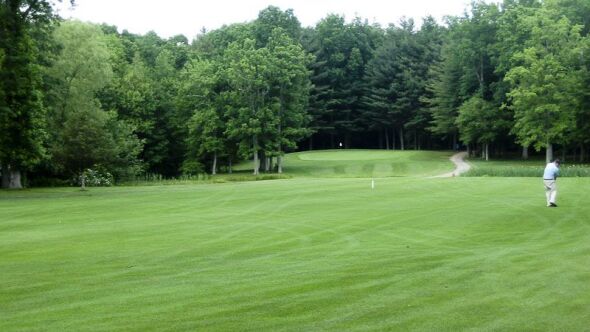 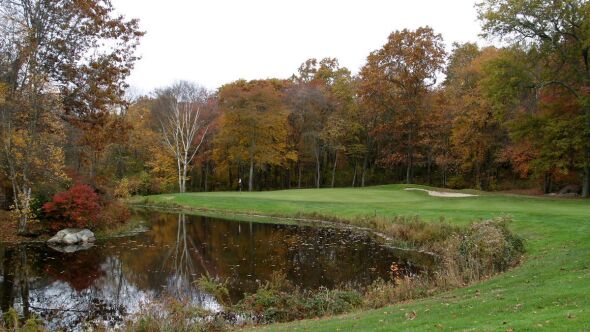 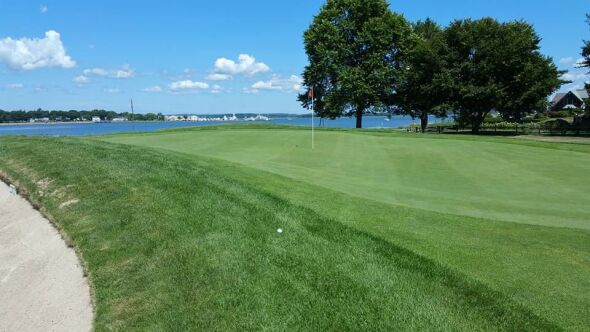 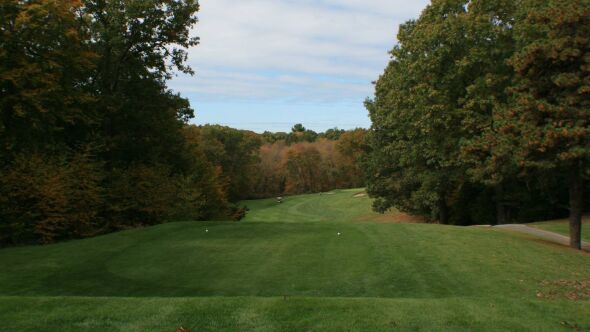 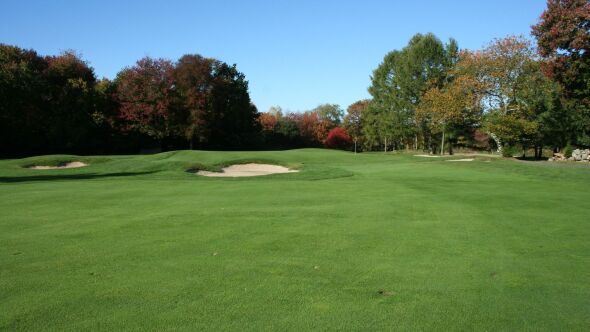 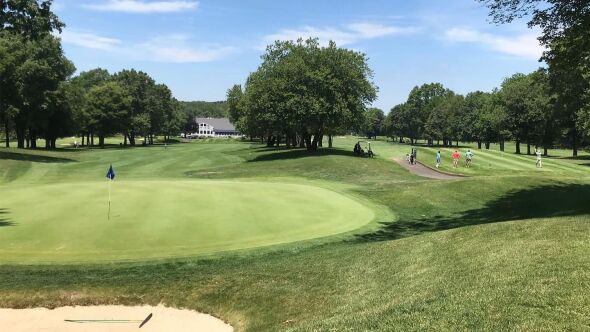 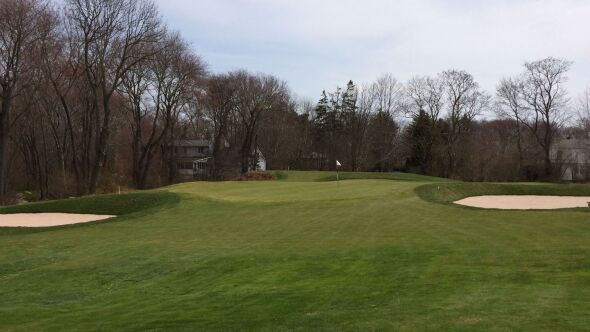 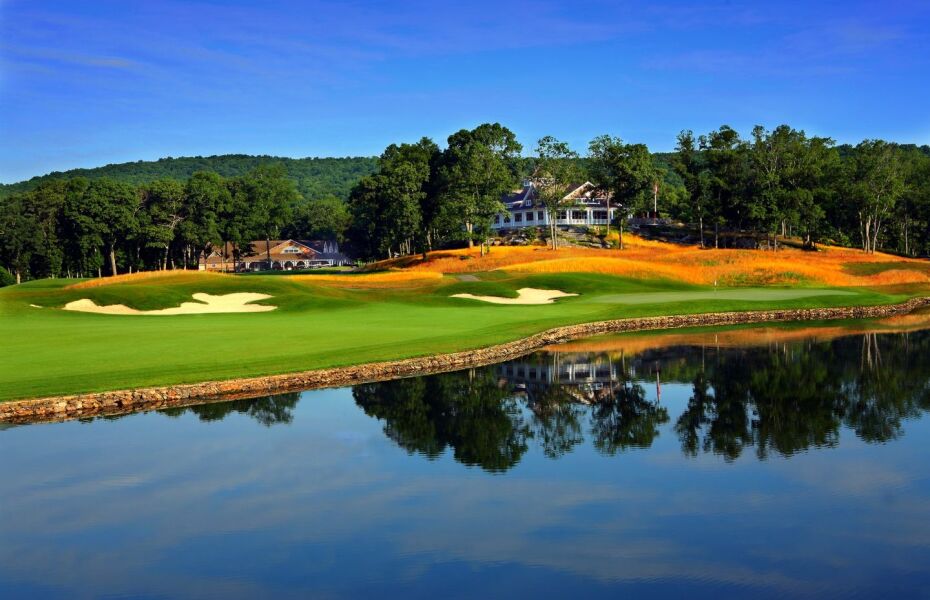 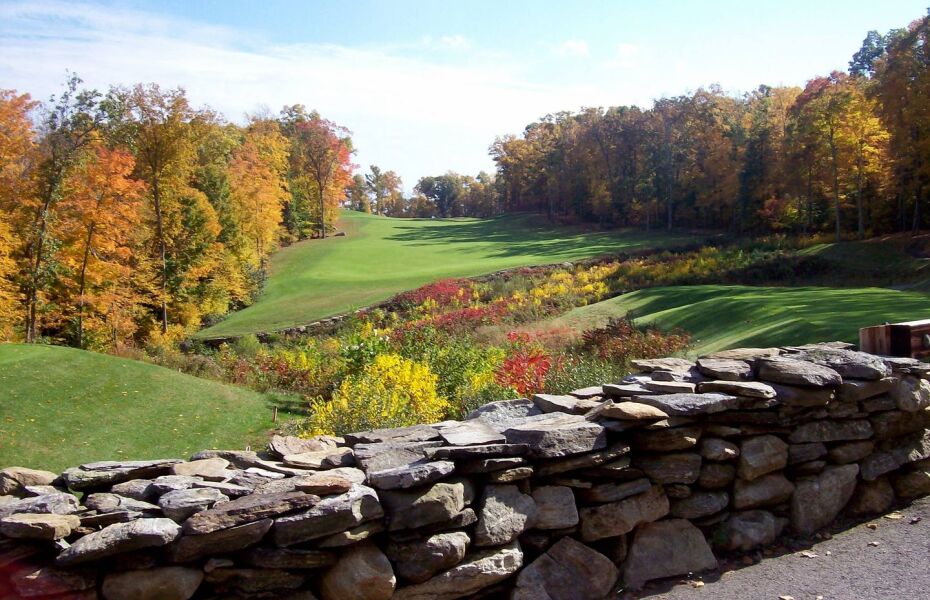 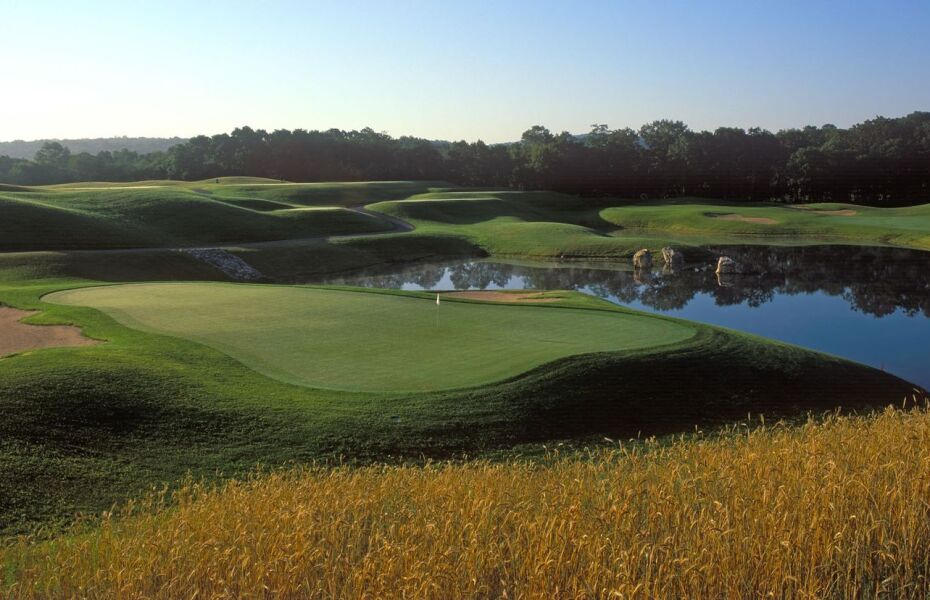 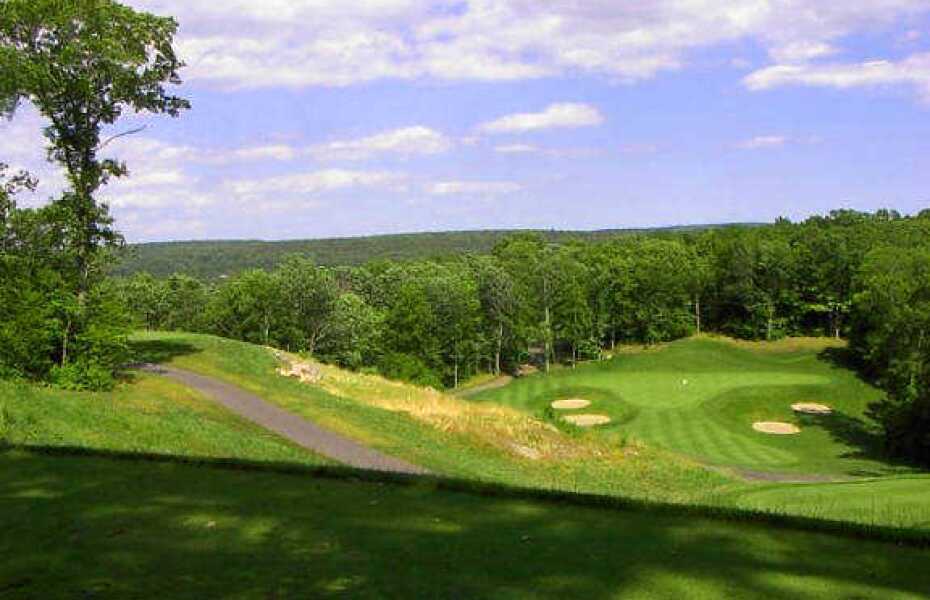 A view of the 4th hole at Fox Hopyard Golf Club 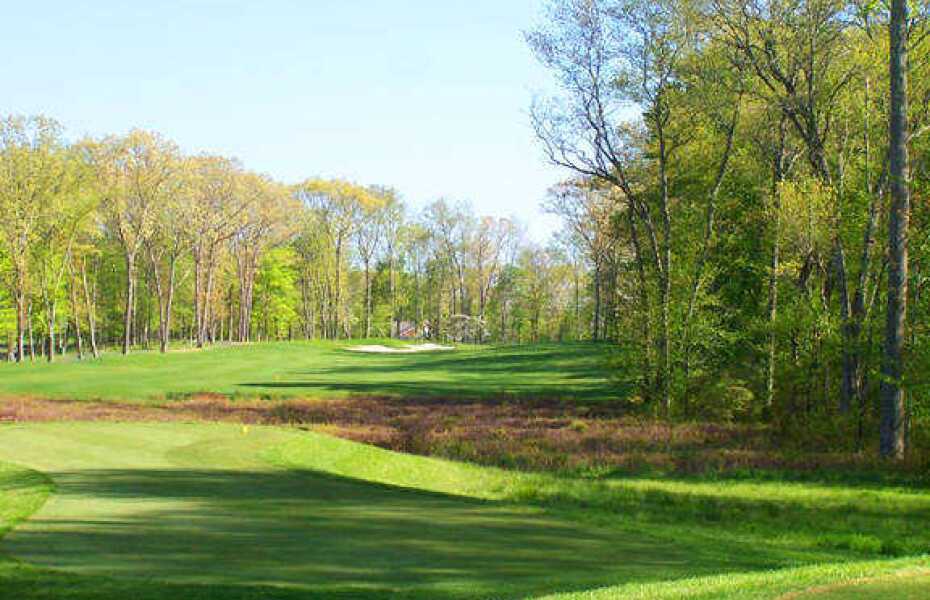 A view of hole #8 at Fox Hopyard Golf Club 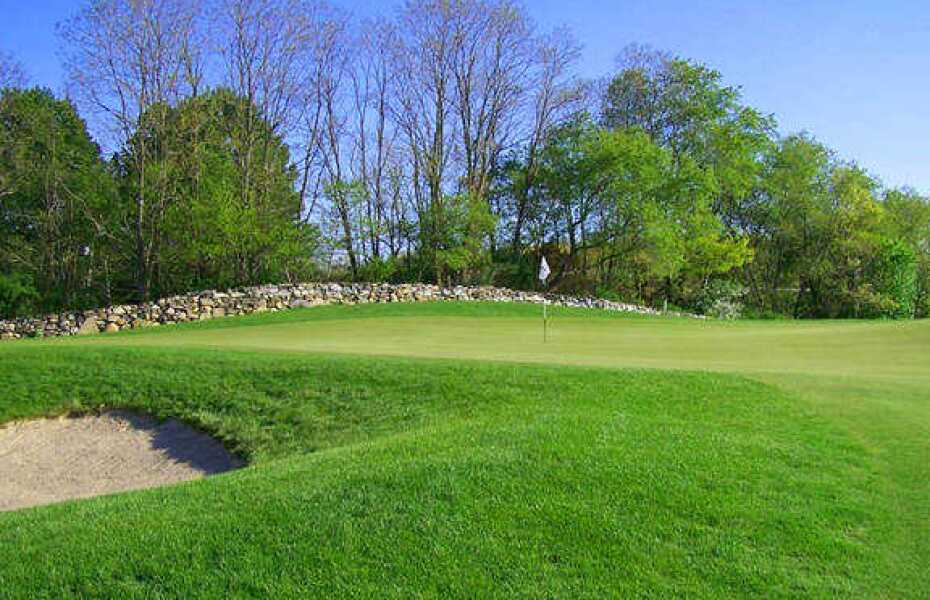 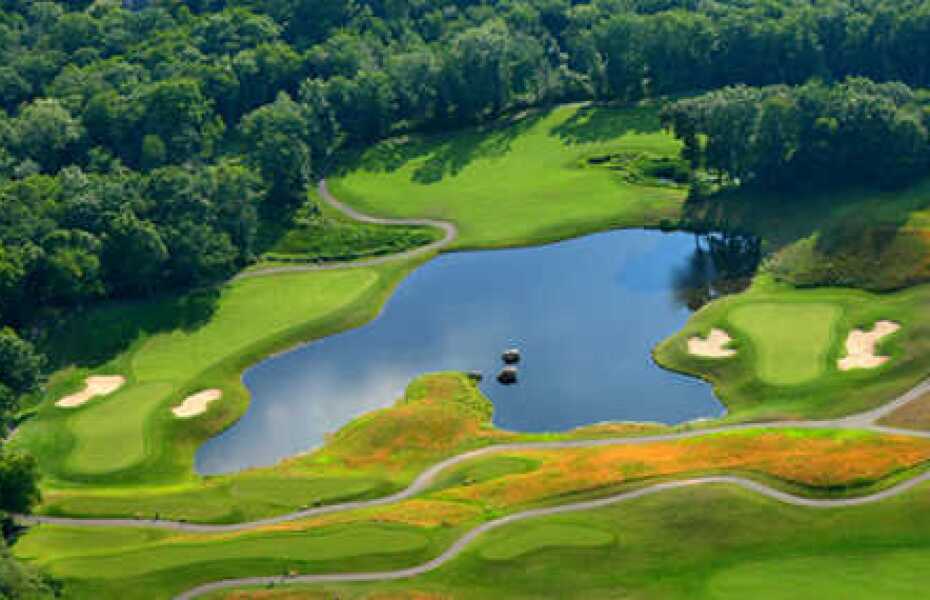