Best conditions ever at Jay Peak

We flew from Phoenix to Burlington, VT, and played the Dinosaur at Gold Canyon just before leaving. The Dinosaur is a wonderful course and I loved it. Jay Peak was at least as good. The conditions were perfect. Fairways and greens of both courses were in perfect conditions. The sand traps were perfect and the flower beds were extraordinarily beautiful and smelled so nice at Jay. The friendliness of the staff is also exceptional. I would definitely give a rating for Jay at least equivalent to the one I gave for the Dinosaur..

The four-mile drive from the tiny town of Jay, Vermont (population 500) is a steep one up to the Jay Peak Resort and Golf Course. Route 242 is heavily forested and the roadside nearly devoid of anything man-made. Having driven in through Vermont’s low-lying farmlands, Jay Peak itself, situated five miles from the Canadian border, has already been visible: the tallest mountain in Orleans County, it towers prominently over the landscape.

The Jay Peak Golf Course has the sort of stature that matches its mountain namesake. Topping out at 6,908 yards from the deep tees, it’s slope rating is 153 (which, for comparison’s sake, exceeds New York’s Bethpage Black’s by a point) and the course rating 75.2. The latter number is a few strokes shy of Bethpage’s mind-boggling 77.5 mark. Curiously, this invigorating layout seems fair in almost every way despite the fearsome scorecard figures; the way you’ll find big trouble here is by simply hitting bad shots into the forested no-man’s land. The fairways, though, are generous enough.

While difficulty plays a role in this course’s superiority, many other qualities make the design a masterful one. Chief among these are key modern elements: sprawling greens, profuse and deep greenside bunkering, lots of ground movement in the fairways and around greens, multiple sets of tees to make the course accessible to a range of players. Most impressive here are some of the under-exploited aspects of modern layouts. These included closely shaved areas--instead of roughs--over large swaths of greenside slopes, the creative and strategic use of fairway bunkering, and large fairway contours and slopes that should govern tee-to-green strategy. The bottom line, then, is that the course should be attacked with gusto (and some cleverness) by tactical-minded players. The large greens alone, affording multiple pin positions, will vary how each hole may be played from day to day.

Such features speak to the course’s playability, yet they only partially answer the question of what supplies the real rigor. And that comes from individual hole design. Consider that every one of the five par-3’s, which would be considered quite challenging for most courses, are classified here as higher handicap holes. The par-4’s and 5’s, though, play much harder as a group.

Although they’re manageable, the par-5’s here are a mark of Jay Peak’s resistance to scoring. One exemplar of such comes at the brutal 13th, a neat switchback hole, which stands out by its uphill climb from tee over 568 yards (gold tees) to the green, by its brushy cross hazard positioned some eighty yards before the green, by the gaping fairway bunkers at the first big bend, and finally by the deep frontal and rear greenside bunkers. Into a headwind, especially, this monster will threaten to gobble up your good score. More troubles await at a couple of other great uphill par-5’s, seven and eleven, while the fourth measures a ‘mere’ 538 and plays downhill from the blue tee. If you play your cards right at four and the risk-reward 16th, they become realistic birdie-chances.

Jay Peak exerts its ultimate powers on players through many long and grueling par-4’s. I found that an incredible nine out of ten of the four-pars played long and tough today, especially given the wind, and it seemed like I wore out my 4-hybrid by round’s end. Part of this rigor derives from the fact that only two of the par-4’s are under 400 yards, and only of these two plays downhill. Six exemplifies how a sub-400 yard hole (of 384) can be difficult: it moves steeply uphill to a driving zone limited by a diagonal cross hazard, then plays further uphill to a shallow green set on a plateau and angled 45 degrees to the fairway.

All of this toughness doesn’t mean you won’t have fun on these powerfully rolling eighteen. I was thoroughly engaged all the way round, especially on par-4’s like the third, eighth, ninth, and tenth, which lend an air of intrigue to the challenges because every one of them felt at least a bit outside-the-box. Jay Peak also gives several risk-reward shots, though I wasn’t a fan of one at the 15th. Here, from the tee, you’re encouraged to bite off as much of marshland as you can in hopes of hitting a wedge into the green, but the fairway is mostly obscured from the tee. Much better are the risk-reward carries at 13 and 16. Each of the five par-3’s was well-designed but also fun to play. Standing out were the two shorter holes of the five: the downhill second and uphill twelfth, while the fifth, a180-yarder, had the trickiest green complex to negotiate, a nearly ‘Reverse Redan’ design favoring a fade.

Most interesting hole: 7th, par-5, 531. A spectacular five-par that plays downhill off the tee, then up, the seventh’s driving zone is beset by huge bunkers left and right. It could be a two-shooter on the strength of a long drive, but the second is still fraught with difficulty in the form of a plateau green with big drop-offs around it.

Hardest hole: 3rd, par-4, 441. The #1 index lives up to its rating, if in unexpected ways. Starting from a high tee where the fairway is only in partial view, the terrain plummets to a tiered and split landing zone, its difficulties compounded by strong pitch and sideways roll. A tough approach follows into a well-guarded green. With impressive floral displays and other plantings, the hole is as beautiful to look at as it is to play.

Service and Course Conditions: At the front desk, service was especially impressive from on-duty Manager Aaron, who gave me detailed directions and tips about how to negotiate the course on a cart--even telling me to give a call on the cellphone if I had any problems--and supplied a ride back to the parking lot when finished. He was also knowledgeable about the layout and its special features. The course conditions were impressive for what is considered ‘pre-season’ in extreme-northern New England. It was a below-average 56 degrees when I arrived here at 1:15 p.m (!), though I still removed my medium-weight windshirt by the fourth hole. Greens and their surrounds were excellent here and tees near-perfect. Only the fairways were ‘good,’ if only because there were a few, minor bare spots on some of the holes.

Some Conclusions: Jay Peak is ranked number one in the reliable Golfweek (2020) among all Vermont public-access clubs. The rating, I think, is fully deserved. Kudos for this layout goes to renowned Canadian architect Graham Cooke: he brought to fruition a meticulously-crafted layout that is playable yet highly challenging, beautiful yet seamlessly interwoven into its spectacular setting. One of the things Aaron imparted to me today was of a golfing group that flies in from Toronto to play, expressly, this golf course. It was a fact that surprised me, but only a little bit.

We stayed in the Club House suite. Good accommodations. And convenient to the course. I wanted to make a tee time for 8-8:30 so we’d have time to play the 2nd 18. I was told first tee time was 9am because of frost delays. There were no frost delays and tried to get out early. We got out at 8:50. Finished at 1:20. 4.5 hours. You cannot make a tee time for the 2nd 18. We were able to get out at 1:30 and that round was going to be 5 hours plus. Never finished.

The three things i took away from this day of golf were 1. how perfect the greens were. 2. How well landscaped and decorated the course was (for Halloween) 3. WHat a challenge the course was. The greens were rolling so pure and fast. They were really fast! but just perfect. There was so much added color with flower beds. They decorated for Halloween. On every hole and in between they had lots of Halloween decorations very tastfully done . Very fun and interesting. There isn;t a flat lie out here. With the wind and elevation changes, makes for a real challenge!

One of the best public courses in New England

Very beautiful setting with mountain views in nearly every hole. My family has been coming here for years and have never been disappointed with the condition of the course.

A large group of friends and I had the chance to play Jay Peak and came away completely underwhelmed at the overall condition of the course. The layout is really spectacular and the elevation changes create truly scenic and enjoyable holes and vistas but the condition of the course was just awful. In particular the greens on the back nine were borderline unplayable. The fairways and general condition of the course wasn’t great but typically I’m not one to really care about that assuming the greens are halfway decent. Unfortunately the greens were so poor and barely had any grass on them it was kind of pointless to even try and putt. To have to have paid full price for this round and not have had a ‘spring’ rate as an option was very disappointing. The proshop staff was also very nonchalant and dismissive of our feedback which made it even worse. Being a Canadian they also didn’t proactively advise us of a cash at par program they have which could have saved our large group money and weren’t open to honoring the program after the round (even as a make good for the poor condition). Wouldn’t go back there again, which is a shame because it could be spectacular.

Wow, this was a great test

Classic mountain course, lots of trees, rolling fairways, and greens to die for. What you see is what you get. Watch for the pin placements. If you get on the wrong side of the hole, yikes, have fun. I can't wait to go back. 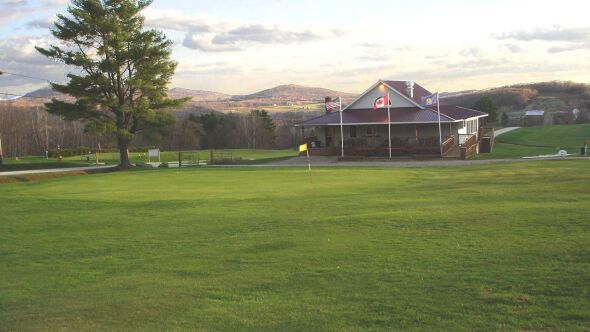 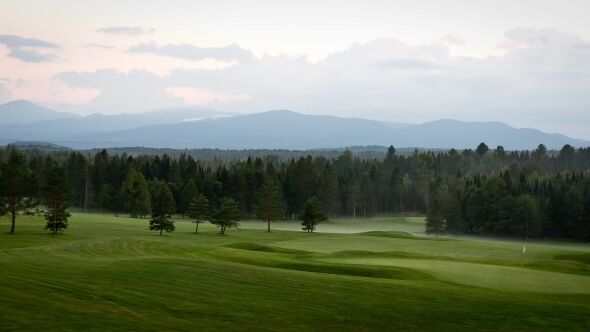 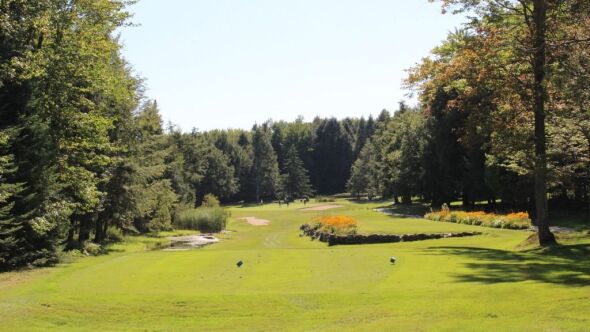 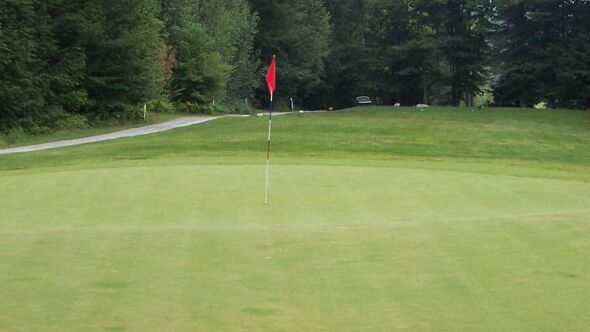 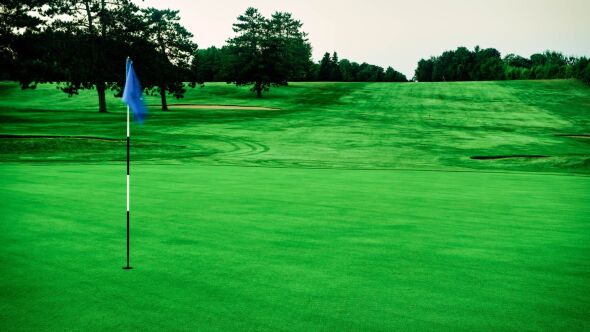 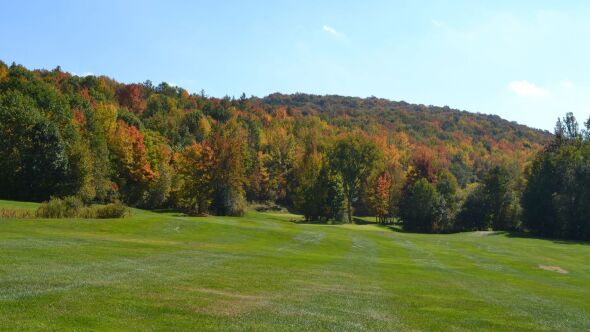 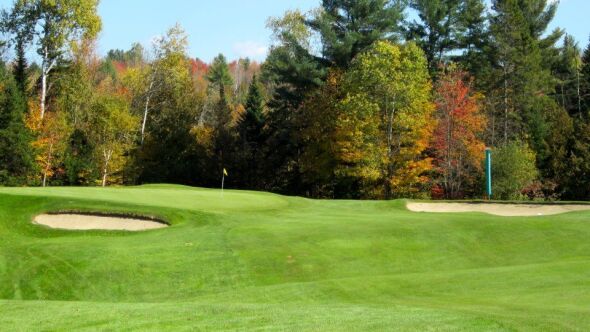 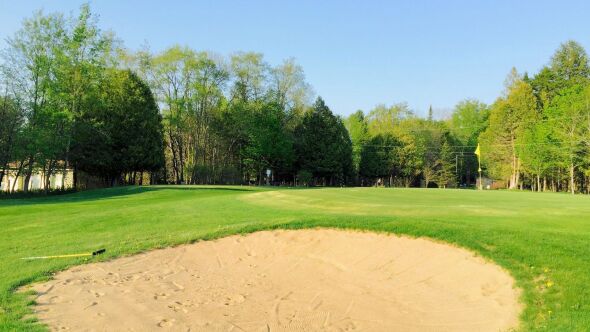 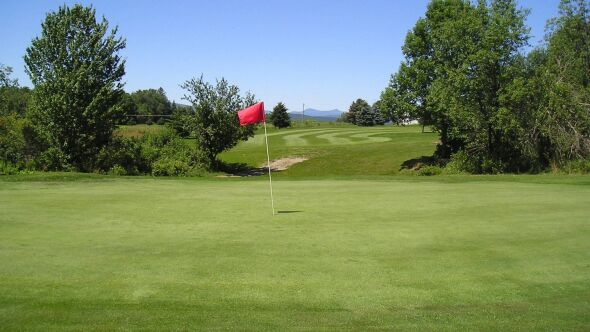 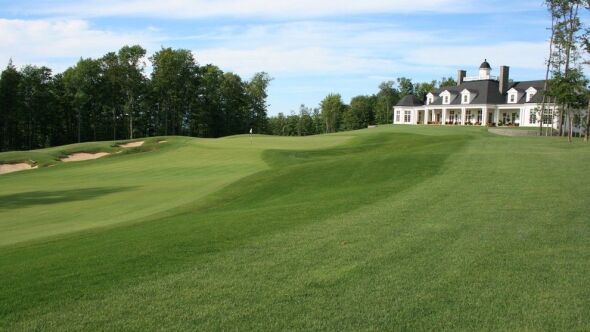 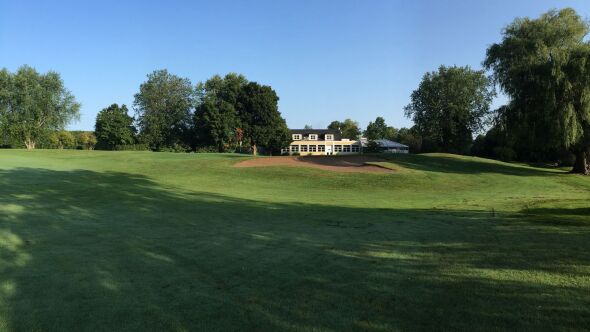 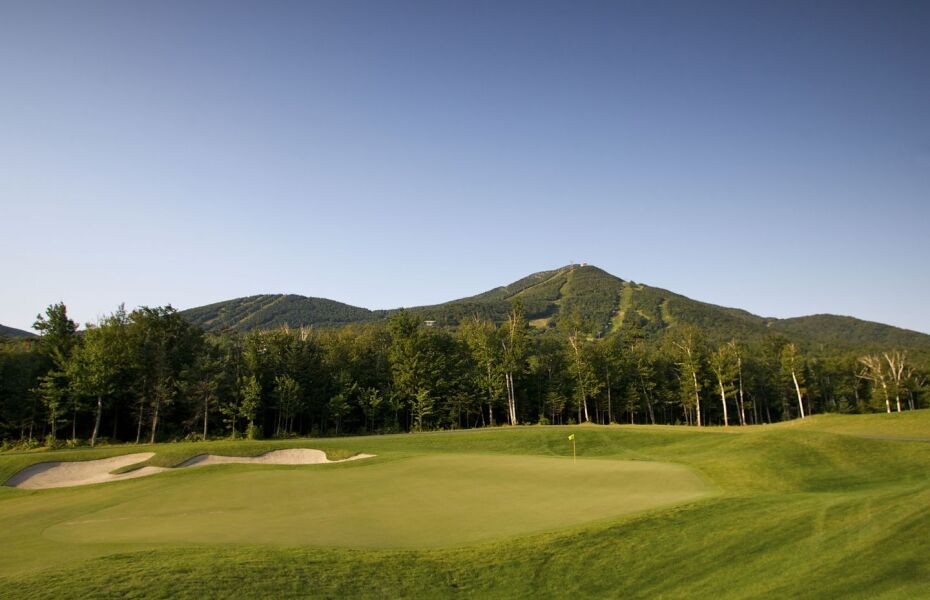 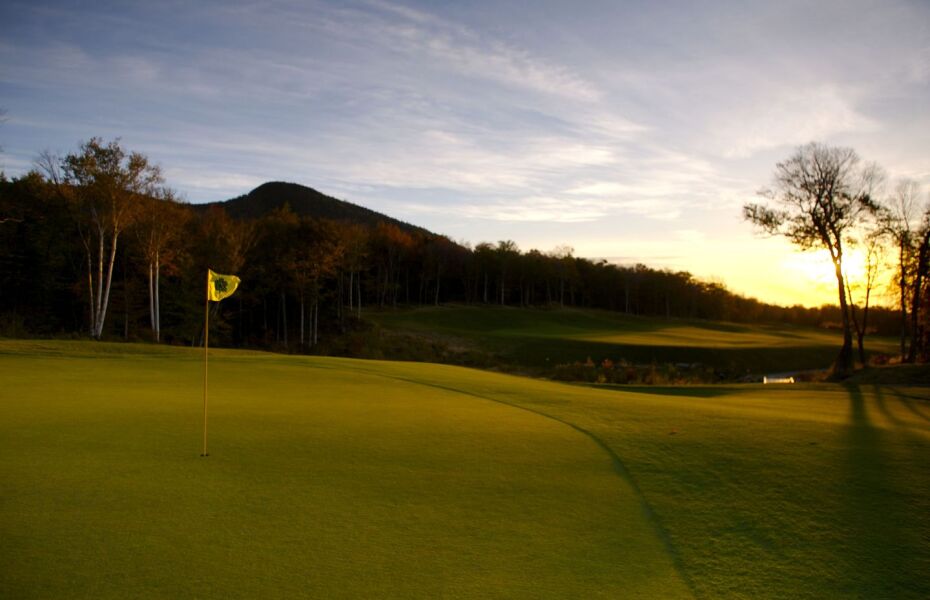 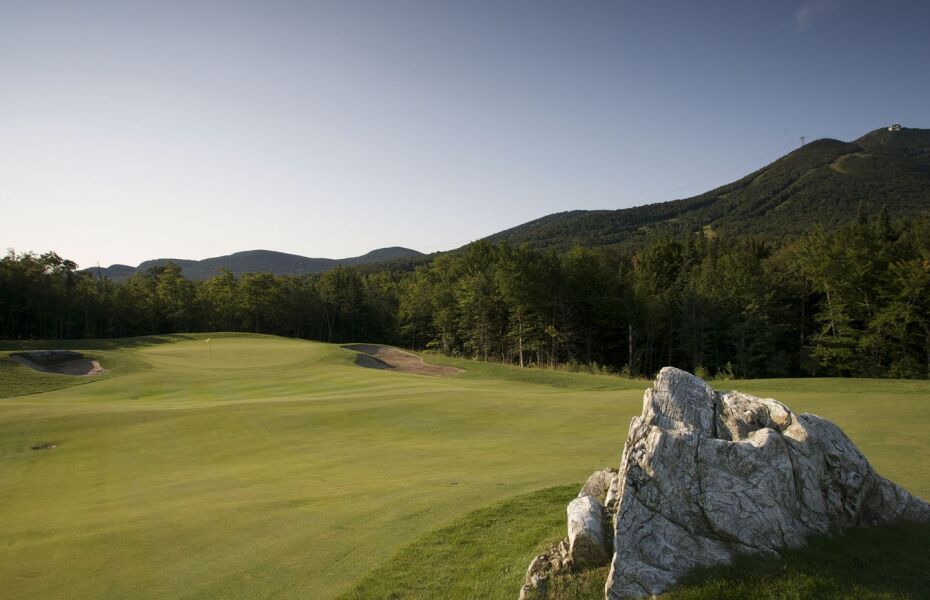 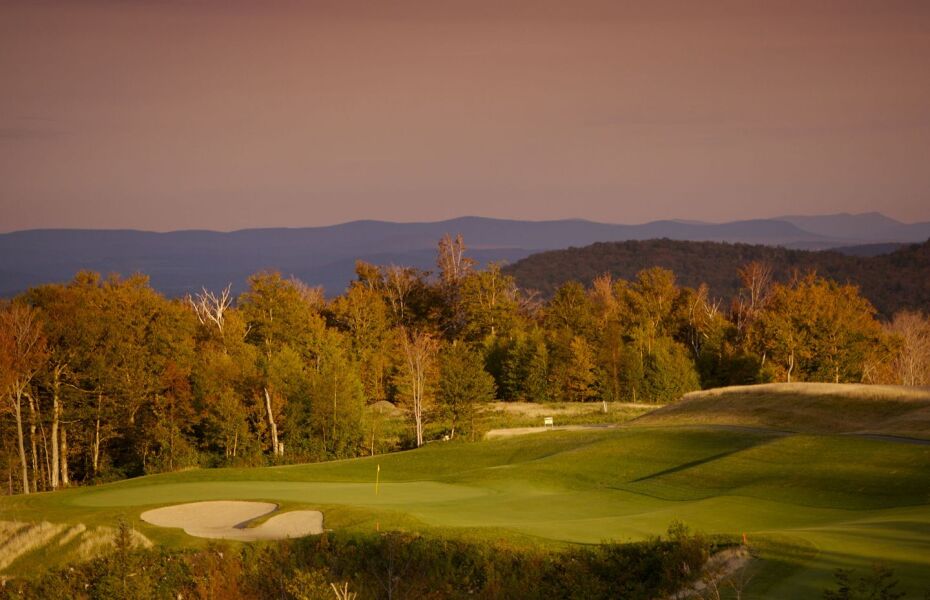