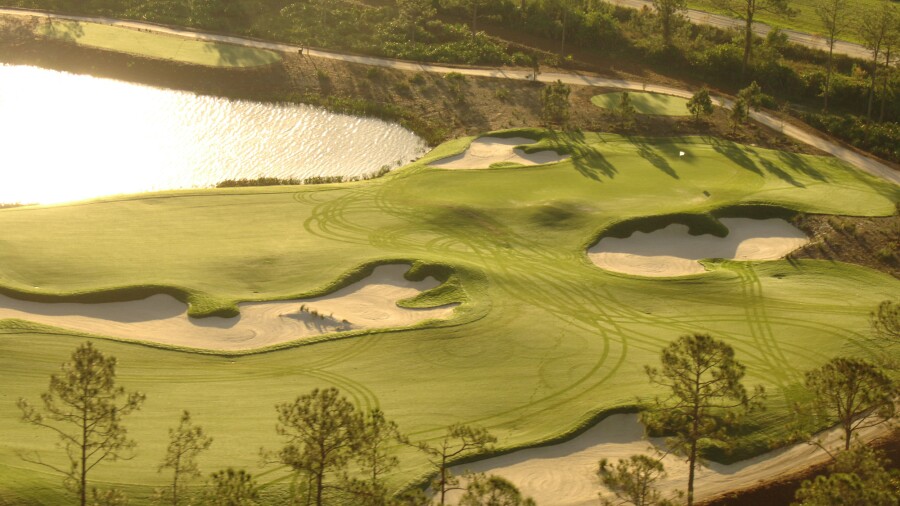 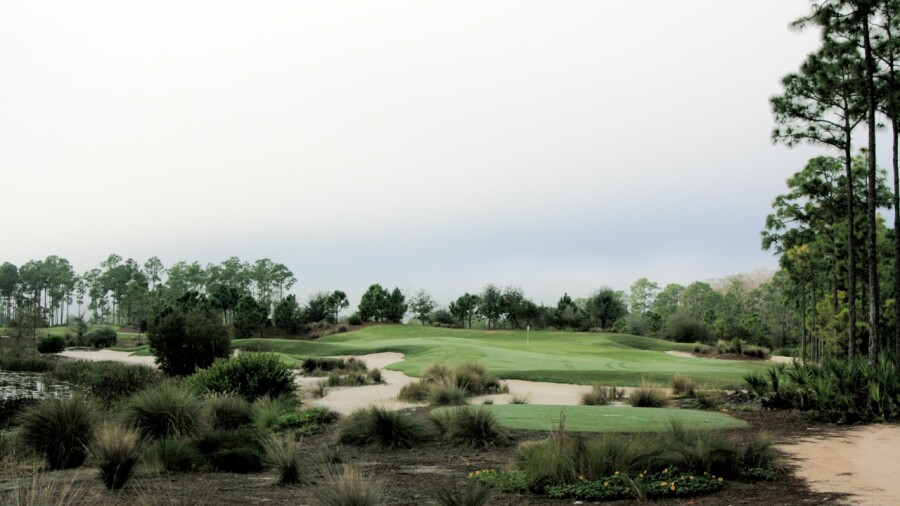 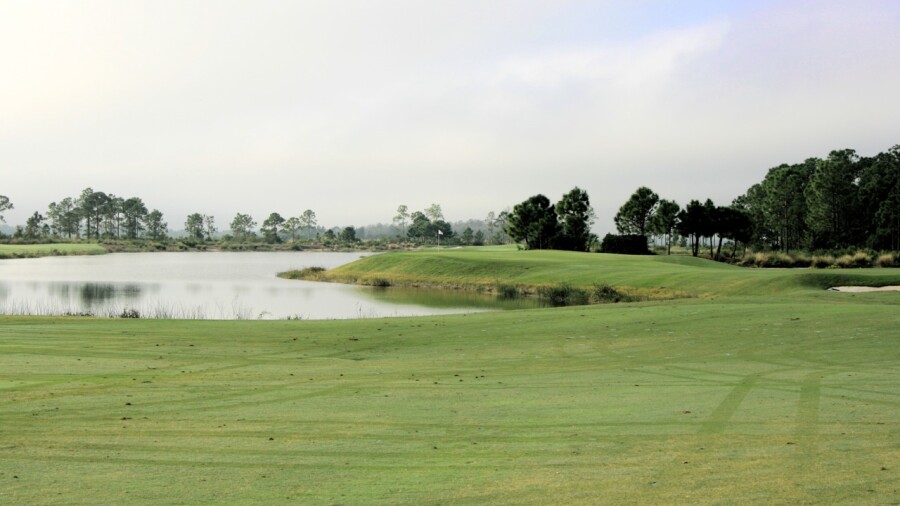 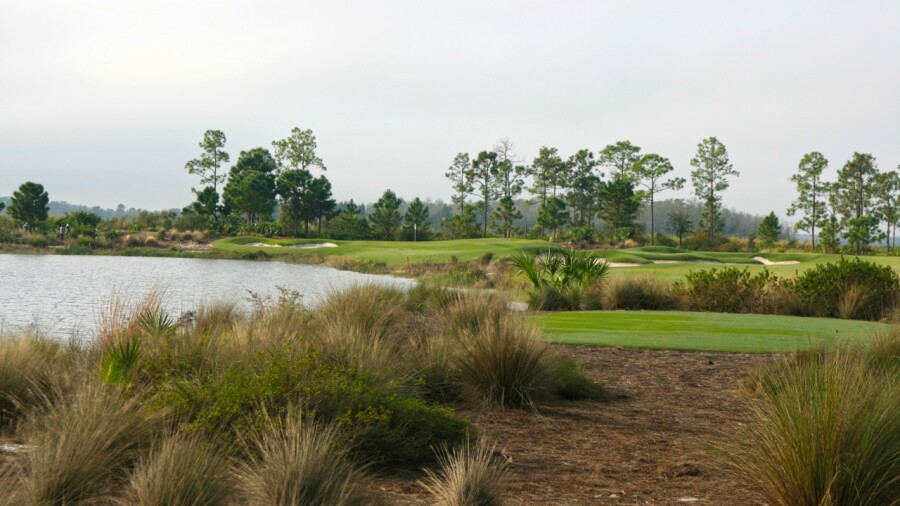 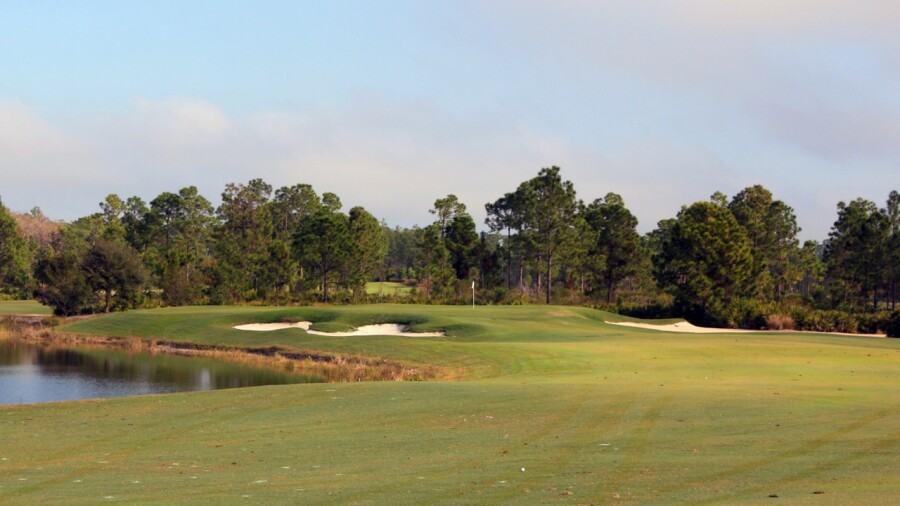 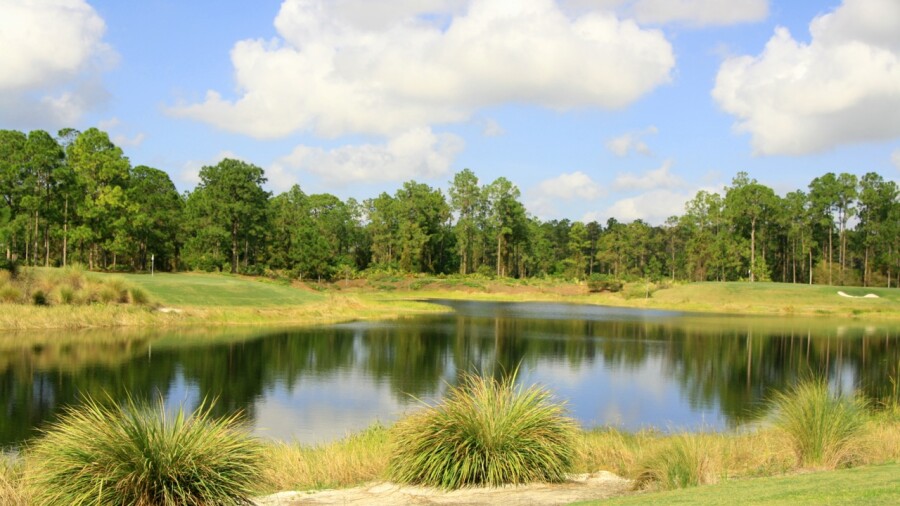 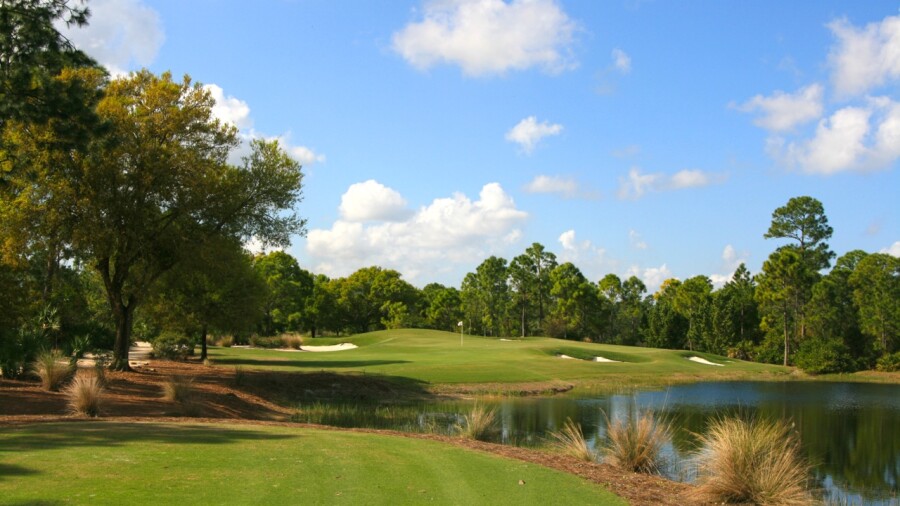 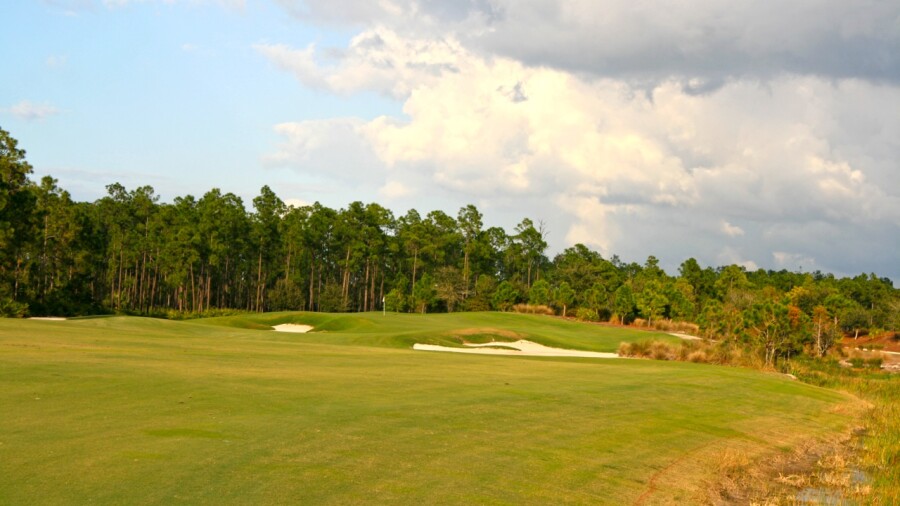 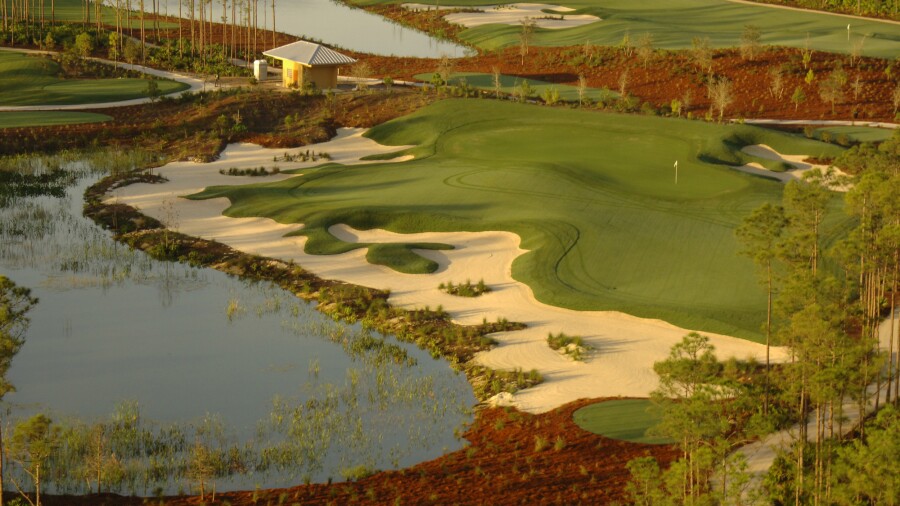 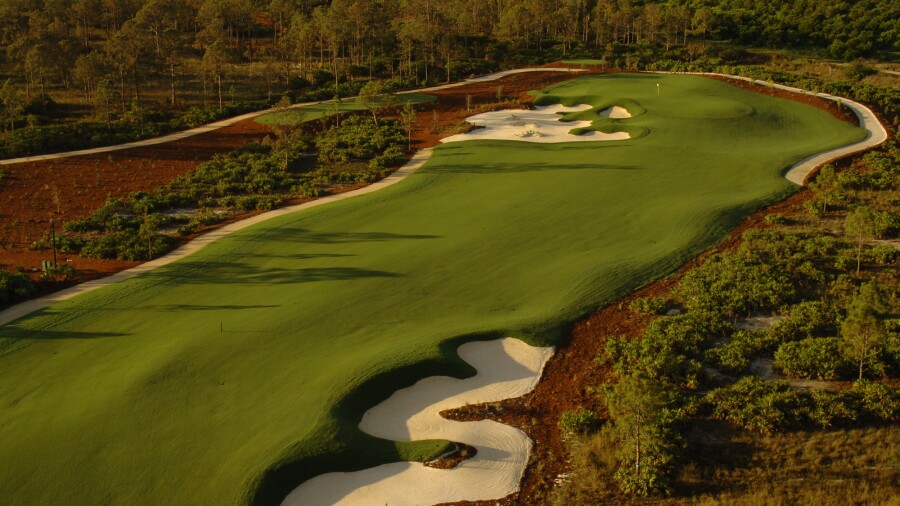 The Jack Nicklaus-designed course, set on 275 scenic acres, opened in 2007. With no development attached to the property, golfers can count on total tranquility -- and they'll need it, because Old Corkscrew has teeth.

Playing 7,393 yards from the championship tees, Old Corkscrew has a peak slope/rating of 77.6/153, making it one of Florida's toughest courses for low handicaps. There are five tee sets here, so choose accordingly.

While playing corridors and fairways are mostly quite generous, the green complexes make up much of the challenge at Old Corkscrew. For example, while the blue tees are a 146 slope, the white tees -- despite playing more than 300 yards less -- are still a 144. The greens are contoured and often surrounded with trouble in the form of deep bunkers or water hazards.

Nicklaus also has a habit of creating risk-reward par-5 green complexes that jut out into water (employed on three of the four par 5s). Those aren't the only risk-reward opportunities at Old Corkscrew, however.

Perhaps the most fun hole on the course is the short par-4 fourth, which has a fairway littered with bunkers. Those who play straight toward the green will have to carry traps and avoid water to the left, but a well-played shot has its rewards with a much easier chip onto the green than those who bail out to the right.

Old Corkscrew has a small clubhouse with a pro shop and grill that has a good lunch menu. The practice facility is a good one, with multiple greens and a large driving range.

Brandon Tucker
Brandon Tucker is the Sr. Managing Editor for Golf Advisor. Prior to the launch of Golf Advisor in 2014, he was the managing editor for Golf Channel Digital's Courses & Travel. To date, his golf travels have taken him to over two dozen countries and nearly 600 golf courses worldwide. While he's played some of the most prestigious courses in the world, Tucker's favorite way to play the game is on a great muni in under three hours. Follow Brandon on Twitter at @BrandonTucker and on Instagram @btuck34.
Related Links
Nearby 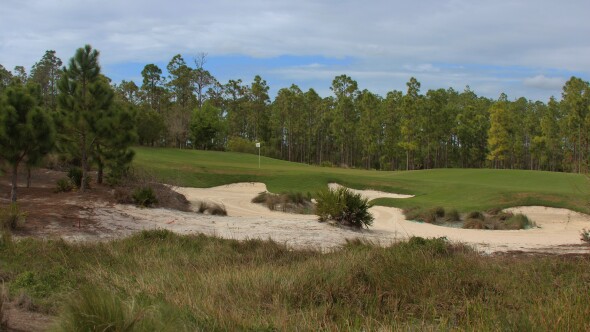 Articles
2 Min Read
Old Corkscrew Golf Club north of Naples: A scenic challenge in southwest Florida
Old Corkscrew Golf Club in Estero, Florida isn't for the faint of heart. Golfers who don't have the guts (or ability) to hit quality shots under pressure might not like this demanding Jack Nicklaus design, but those of us who love risk-reward shots will find Old Corkscrew a pure pleasure. Our best advice? Enjoy Old Corkscrew for what it is -- a cart ride on the wild side. 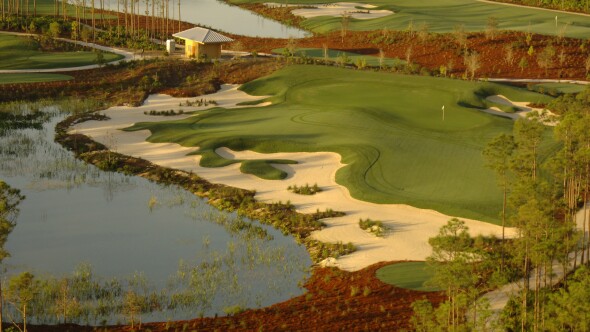 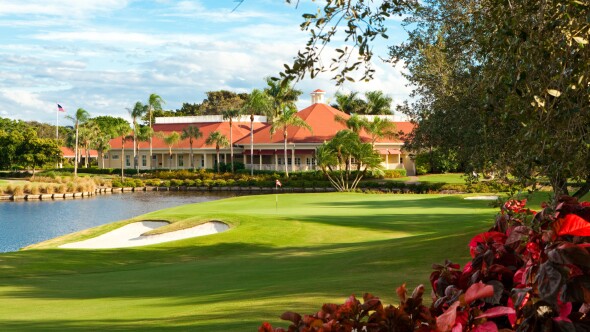 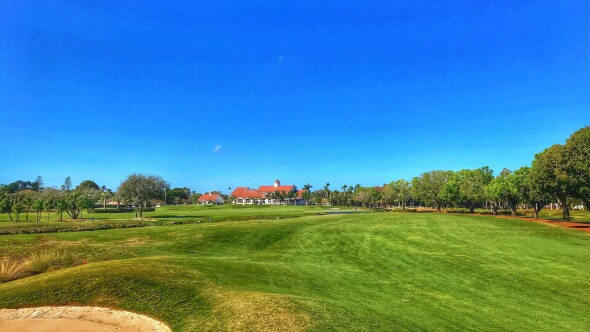 Articles
9 Min Read
A foursome of diverse Fort Myers golf courses
Fort Myers sits in the heart of southwest Florida, making it an attractive spot for vacationing golfers. The courses feature both affordable courses and high-end plays nearby. 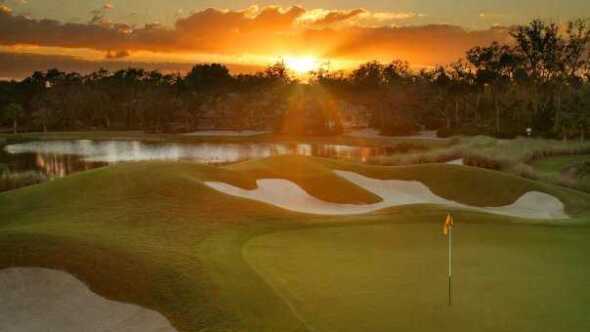 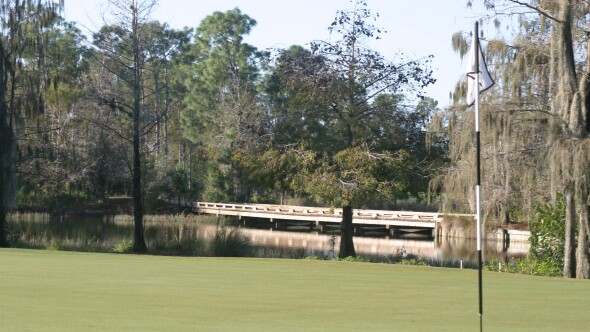 Articles
4 Min Read
Tiburon Golf Club in Naples, Fla.: Home of the Shark Shootout and a grand Ritz-Carlton resort
The Greg Norman-designed Black and Gold Courses at Tiburon Golf Club in Naples, Fla. play like links golf -- firm and fast and full of pot bunkers. And the adjacent Ritz-Carlton property secures this 36-hole venue's spot as a must-see golf destination in a town filled with more golf courses per square miles than anywhere else worldwide, Jason Scott Deegan writes.

By Jason Scott Deegan
Read More
Load More
Now Reading
Scenic, natural and tough: Jack Nicklaus-designed Old Corkscrew Golf Club in Estero, Florida
New Cookie Policy
WE AND OUR PARTNERS USE COOKIES ON THIS SITE TO IMPROVE OUR SERVICE, PERFORM ANALYTICS, PERSONALIZE ADVERTISING, MEASURE ADVERTISING PERFORMANCE, AND REMEMBER WEBSITE PREFERENCES. BY USING THE SITE, YOU CONSENT TO THESE COOKIES. FOR MORE INFORMATION ON COOKIES INCLUDING HOW TO MANAGE YOUR CONSENT VISIT OUR COOKIE POLICY.
CONTINUE
Search Near Me