Portrait of a young restoration architect

Meet Kyle Franz, old school designer and specialist in restoration architecture. Even his golf clubs are completely out of date. Which is just the way he likes things.

It’s media day at Country Club of Charleston, South Carolina, a 1925 design by Seth Raynor that is getting ready for the 2019 U.S. Womens Open. Much of the heavy lifting to get the course revived took place over a decade ago by Brian Silva, another designer with a penchant for retrofitting. Now the club has turned to Franz to tweak things, keep an eye out, and prepare a long-term plan to guide the club for the next 20-30 years,

As part of his duties, Franz is playing golf with the press and showing them what he’s thinking about. Much of it involves bunker work – both moving hazards and strengthening their shape. Guidance for this comes by way of newly unearthed historic documents in the form of old plans, notes and aerial imagery found by club archivist, Forrest Norvell. The trove he uncovered helped Franz undertake a craft that he describes as “part architecture, part archaeology.”

He’s on the fourth hole at CC Charleston, a 384-yard par 4 with bunkers intruding on both sides along an offset staggered angle that represents Franz’s first substantive tweaking of the golf course. He stands over his tee shot, about to challenge a left side bunker some 230 yards off the tee, and it becomes apparent that the club he’s got in hand is something of a relic – a two-decades-old (at least) Callaway WarBird driver with 11-degrees of loft. “It was 14 years old when I got it," he says proudly.

A glimpse into his golf bag reveals irons of equal vintage: TaylorMade Burner Midsize irons with the grips so worn down it looks like the life has been squeezed out of them.

Franz is unapologetic. Actually, he’s ingenious, explaining his choice of equipment as part of the tools of his design trade. “I find these clubs allow me to hit the ball just about as far as Raynor and the others in the 1920s were relying upon for the players they designed for,” he says. “So they give me a good sense of how the course was intended."

It’s a credit to his diligence that Franz hits the ball pretty well with what might politely be described as a “self taught” swing of "the caddie yard variety” – weak grip, inside take away, shoulders at some sort of weird angle at the top, yet with impressive force through impact and he holds on through the impact line to produce a low draw with strength and regularity. It’s enough to maintain a mid-single-digit handicap, though befitting his trade Franz is more interested in hitting shots than scoring. In this case his drive lands just abreast of the left-side bunker in question, leaving him 150 yards in, which he handles deftly with a low-slung 7-iron that lands short (as planned) and runs up to within 20 feet of the hole.

With @KyleFranzGolf restorationist at CC Charleston for @USGA Women’s Open preview round. pic.twitter.com/gl2ZLwbfxT

Franz, 37, grew up in the Albany-Corvalis area of Oregon and came to course design early on from what he saw on television and read about. The region wasn’t big on classic-era design, but there was Eugene Country Club nearby to visit, along with Waverley Country Club and Columbia Edgewater Country Club up in Portland.

He studied turfgrass at Oregon State University – the closest major to the subject matter he really loved. Even before finishing up at OSU in 2003 he was supplementing his class time with experience in the field; in 1999-2000 at the helm of a mini-excavator and small bulldozer shaping Pacific Dunes in Oregon, a bluff-side links course co-designed by Tom Doak and Jim Urbina that would win universal praise.

Next came fieldwork at the North Course at Stonewall Links, a Doak design in Elverson, Pa., followed by 10 months in Tasmania on Doak’s Barnbougle Dunes and then Stone Eagle Golf Club in Palm Desert, California. From there, he worked for Tim Liddy on the rebuild of the Duke's Course in St. Andrews, Scotland, before heading off on an extended tour of courses throughout Great Britain and Ireland.

Eventually he landed work with the design/build operation led by Bill Coore and Ben Crenshaw. And it was during the restoration of Pinehurst No. 2 that Franz really immersed himself in the work of Donald Ross. There, the peeling back of layers of modernization entailed not just uncovering lost shapes to bunkers and greens but also a reclamation of the entire grassing system – most notably the old sand-scraped, wire-grass areas astride fairways.

Among those locals watching closely the work at Pinehurst back in 2011-2012 was Kelly Miller, president of Pine Needles and Mid Pines. The two Donald Ross-designed resort layouts are four miles down the road from the big Pinehurst Resort property. In a small town where nearly everyone is in the golf business, word of interesting work travels fast. After meeting Franz at a golf outing, Miller took him up on an offer to walk Mid Pines, where plans were underway to convert the bentgrass greens to a new hybrid strain of Bermudagrass.

What Miller wasn’t prepared for is that when Franz showed up for the walk-through, he was armed with photo-shopped versions of the holes showing suggested improvements, all in line with the original intent of Ross. Later on, he amended this with detailed drawings in the same graph-paper style that Ross relied upon throughout his career. Franz’s version included refinements like tees relocated to accommodate contemporary dispersion patterns. He also foresaw restoration of the old scruffy, native Sandhills vegetation.

Miller let Franz weave his magic on one hole. “The results were amazing in terms of an old school feel,” says Miller. “At that point we had to do all the other holes or they would have looked terrible. The change in how the roughs and bunkers looked was extraordinary.”
No. 5 at Mid Pines: Before and after 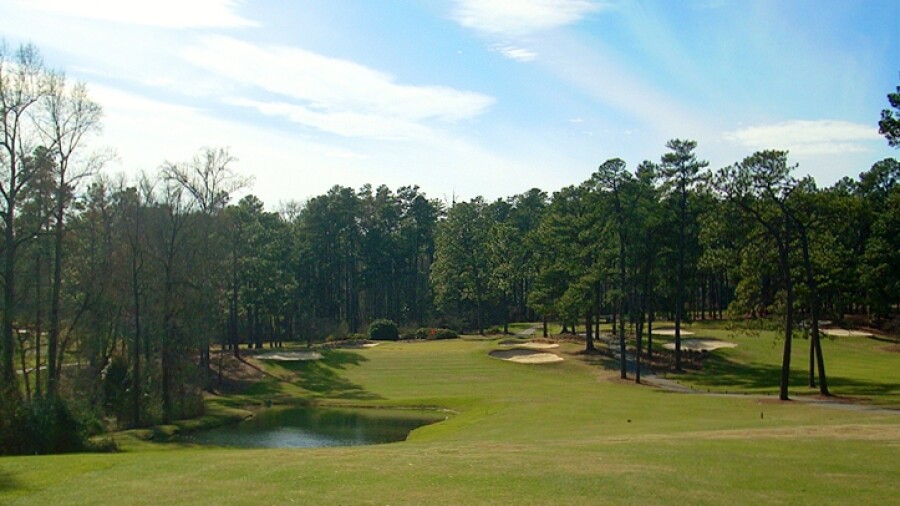 Mid Pines No. 5: Prior to Franz renovation. 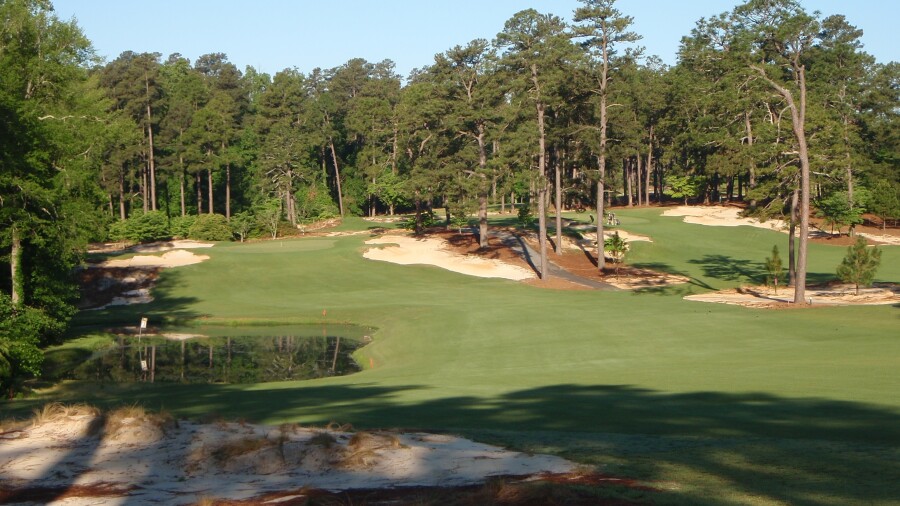 Mid Pines' 5th hole after renovation.
Soon Mid Pines flourished – a far cry from its second-tier status among Ross’ work in the region. The success of the work there led to an assignment across the street at Pine Needles. He also helped implement Gil Hanse’s plans for creation of the Olympic Golf Course in Rio de Janiero for the 2016 Olympiad.

Franz’s cellphone has been ringing a lot lately. He now has work on the books at several classic-era courses: Charlotte Country Club, Minikahda Club in Minneapolis, Silver Spring Country Club in Connecticut and both Haverhill Country Club and Woods Hole Golf Club in Massachusetts.

Over at CC of Charleston, Franz’s work has only begun. It will be renewed in pace once the U.S. Women’s Open is completed this May. Much of the work entails naturalizing the roughs, weaving wiregrass across the site and enhancing pond edges and low-lying areas fronting tees with sweet grass and pampas grass. There’s also tree work under way and greens anticipated – always a dramatic undertaking on a course sporting Raynor’s telltale putting surfaces that combine massive form, bold contours and linear perimeters.

Under Miller’s instigation, Franz has also made a big shift in terms of home and office. He’s moved into Pine Needles, with a residence in a cabin by the 18th tee and a work space up in the lodge. The timing could not come better, since Franz’s work there on tees, bunkers, greens, and native sandscapes will be on display at the 2019 U.S. Senior Women’s Open at Pine Needles, July 9-12.

It’s doubtful if any of the players at that event will be using clubs of the vintage Franz deploys. Of course, they’re more interested in producing low scores. For his part, Franz just wants to channel the classic-era architects.