It's 2020 and data-driven golf apps are here to assist with every shot you take in a round of golf. The relationship can get weird.

Standing on the tee of the par-3 2nd hole, I've got 199 yards to the front of the gently elevated green. The breeze seems to be coming off my left. I'm debating a 5- or 6-iron.

My caddie chimes in: "Pitching Wedge."

I glance down at my wrist and on my watch is my "Virtual Caddie" showing its target on the hole diagram at the widest part of the fairway about halfway to the sparsely defended green.

Pitching Wedge, Lob Wedge, Putter is what its analytics think is my best chance at this fairly benign hole.

Welcome to the new world of digital, wearable caddies powered by shot tracking and artificial intelligence, so advanced they rightfully have little-to-no-faith in my sketchy game and probably yours.

Golfers gobble up gadgets, so expect a digi caddie of some form to take on your bag soon. Loopers in America of the blood-and-sweat variety are settling into a future confined to mostly bucket-list resorts, exclusive clubs, and some subsidized grassroots programs like Youth On Course. Modern-day wages have made caddies with a heartbeat a novelty (humans, goats, llamas). But what golfer doesn't need some help on the links? Tech companies are filling in with data-powered wearable and smartphone apps.

Garmin's Virtual Caddie uses your shot history as well as its mapping of 41,000 courses, as well as local wind data to pull the club for you.

Arrcos' website promotes the power of its A.I.: "Arccos members improve by 4.2 strokes in the first year, some in as few as 5 rounds."

Arccos starts at $179 for the sensors and a year subscription to the caddie and analytics dashboard. Garmin's Approach s62 watch ($499) has a Virtual Caddie. Other apps like V1 Game use their shot-tracking data to provide instant coaching analysis sharing strength and weaknesses. SwingU, another GPS and Apple Watch app, offers an artificial intelligence-driven virtual caddie promising "smart" club recommendations.

By using shot-tracking technology these apps gradually learn how far and where you hit your clubs. After a few rounds they can provide advice on what you should hit and to where on any golf course they have mapped. The virtual caddie remembers every shot you hit and puts it into an app dashboard where you can see your average distances with each club, how much you're missing right and left and where you're wasting shots on the greens.

The truth about your golf game cannot hide from the virtual caddie.

The virtual caddie is emotionless and ready to provide the predictive scoring average instantly based on every shot of yours it's ever tracked.

A round of golf with a virtual caddie

As my virtual caddie and I have gotten to know one another, I've learned its advice is generally more conservative than my golf brain's impulses. Resort caddies know that you're there to go for broke (could you imagine laying up on holes 6 or 18 at Pebble Beach after a big drive?). Their job is to jack you up and make a great swing. Eagles and lifelong stories tip more than a vanilla 82.

My virtual caddie is emotionless and ready to provide the predictive scoring average instantly based on every shot of yours it's ever tracked. For me, an 8-handicap with a two-way-miss going on in perpetuity, driver isn't recommended as often as much as I think it should. On par 5s the advice is a head-scratcher. It calculates in real time that by hitting two 5-irons and then a 7-iron, I will average a 5.2 on this hole, but if I hit Driver, 3-wood, chip, it will be a 5.3.

So by heeding my virtual caddie's advice we plod about the course in a tactical, Jim Furyk and Fluff Cowan-style fashion. Until we don't. Out of nowhere, it tells me to hit a 3-wood over trees and a creek to an elevated green. I haven't gotten a 3-wood 30 feet off the deck in six weeks! Give me the 9-iron.

The many faces of the virtual caddie 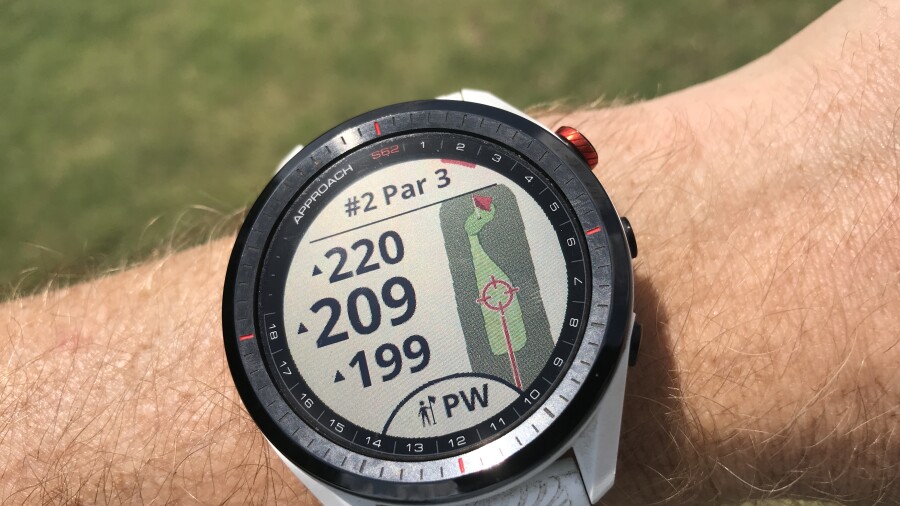 Lay up on a par 3? Some confidence you have in me. Brandon Tucker/Golf Advisor 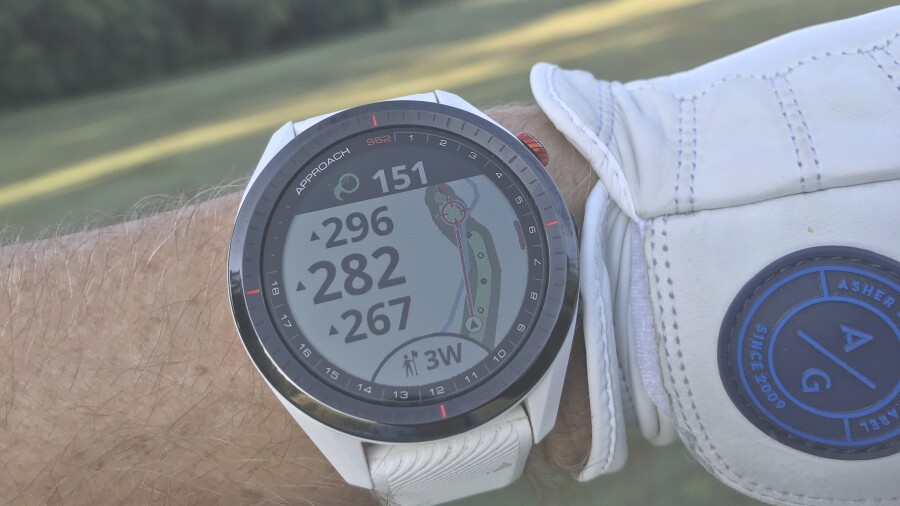 Just take this 3-wood over the trees and creek and land it softly on the elevated green. Brandon Tucker/Golf Advisor 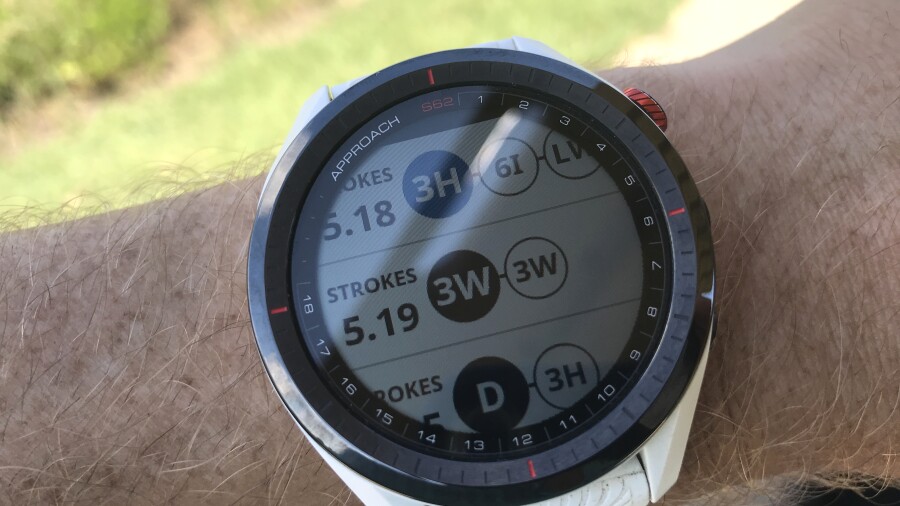 There are positives with a virtual caddie compared to the human variety. You don't need cash on hand. You don't have to worry about its personality clashing with yours. It won't show up hungover or accidentally leave a club behind. But it isn't very eccentric. It doesn't tell me stories like my Pinehurst caddie told me years back about how he accidentally ran over my boyhood idle Steve Yzerman in the staging area ("It's okay, I know how to take a hit," responded Stevie, according to the caddie), or how he saw a well-known PGA Tour pro served divorce papers as he walked off a tee box during the Tour Championship. Pinehurst has the best caddies. My second time there my caddie had me dropping putts on No. 2 like Crenshaw. Virtual caddies can't read break or speed. It'd be sacrilege to boot up mine while playing there.

I've had caddies tell me about their rounds looping for presidents like Clinton and Trump, what they tipped and how often they cheated. My virtual caddie never plays with anyone interesting unless I'm playing with somebody interesting.

That isn't to say my virtual caddie and I aren't fostering a rapport. We've had our highs and lows. Playing a quirky budget course for the first time, it saved my Srixon as the yardage plate in the tee box of a downhill par 3 with trouble everywhere was off by a good 25 yards. There are indecisive moments on new courses where the club recommendation gives me a little confidence boost.

But we recently got into it. On a 350-yard dogleg right, it suggested I lay up off the tee with a hybrid. But the hole suited my eye perfectly to take the Tiger Line with the driver. I stood on the tee with the hybrid in my hand before backing off and grabbing the Big Dog. Striped it.

"Hybrid, my a**!" I screamed at my wrist as my towering drive reached its apex, my playing partners looking confused. I had to explain. Virtual caddies can't tell when you're oozing with confidence or when your game is in shambles or if a work email has you distracted or if you've been drinking. Waiving it off is easier than Michael Greller. It will, in fact, not go get that.

My virtual caddie doesn't ask for a little something for the effort. It just asks that I plug it in after a long day's work. I take it to the pool with me where it's allowed.

One day, my virtual caddie and I's relationship will grow stale. A more advanced A.I.-powered caddie will emerge. Or maybe I want to start fresh with all new shot analytics. I want a new caddie with no record of that topped 3-wood six months ago, or that chunked 9-iron on 16 last week.

Really all I want in my app - my partner - is something as naive and optimistic about my game as I am.

Brandon Tucker
Brandon Tucker is the Sr. Managing Editor for GolfPass and was the founding editor of Golf Advisor in 2014, he was the managing editor for Golf Channel Digital's Courses & Travel. To date, his golf travels have taken him to over two dozen countries and nearly 600 golf courses worldwide. While he's played some of the most prestigious courses in the world, Tucker's favorite way to play the game is on a great muni in under three hours. Follow Brandon on Twitter at @BrandonTucker and on Instagram at @btuck34.
6 Comments

Too many machines doing too much for us already. During golf? I rarely use my Garmin because it is horrendously inaccurate and even though it is only 18 months old, does not have programmed into it changes some of my local courses made 5-6 years ago. It is the worst golf investment I have made.

If I am on a new course, I do pull out my phone app simply because I am unfamiliar with the terrain and layout in general. If I have played a course more than twice....I let my eyes, instinct and the course's markings make my decisions.

Haha distance with irons isn't my problem. I've got Ping G30s, they're pretty hot on the face. I don't hit many greens though, either. Maybe I need to dial them down.

Recently, I was reading in Golf Advisor comments about the pros and cons of how technology has impacted on the equipment and the game - particularly in the driving distance and artificially low scores - even mediocre golfers can drive the ball 250 yds. Now we have machines that will do the thinking for us - duh, what club should I use now?. So just at what point do people actually play this game themselves and experience the thrill of having their skills win a hole?

Nice article again BT. I too have the odd strange piece of AI advice. I often start some rounds promising to follow the caddie to the letter, but end up doing my own thing, much like yourself. Perhaps I should stick to the caddies advice exclusively as an experiment.

Thank you! I Today my virtual caddie wanted me to hit a 3-wood over water (230 carry) to a green with basically no room to miss. It is starting to get more confident in me, I guess. I bashfully laid up with a 9-iron instead.

Every time I've been to a course where I've had a caddy, they have watched me during my warm up and observe what clubs I'm hitting well and what clubs I'm not hitting too good. Am I hitting the 3 wood flush 4 out of 5 times, or just 1 out of 5? but I'm hitting the 9 iron solid 5 out of 5? A watch is just going to read data and not understand how well you're playing on that specific day.