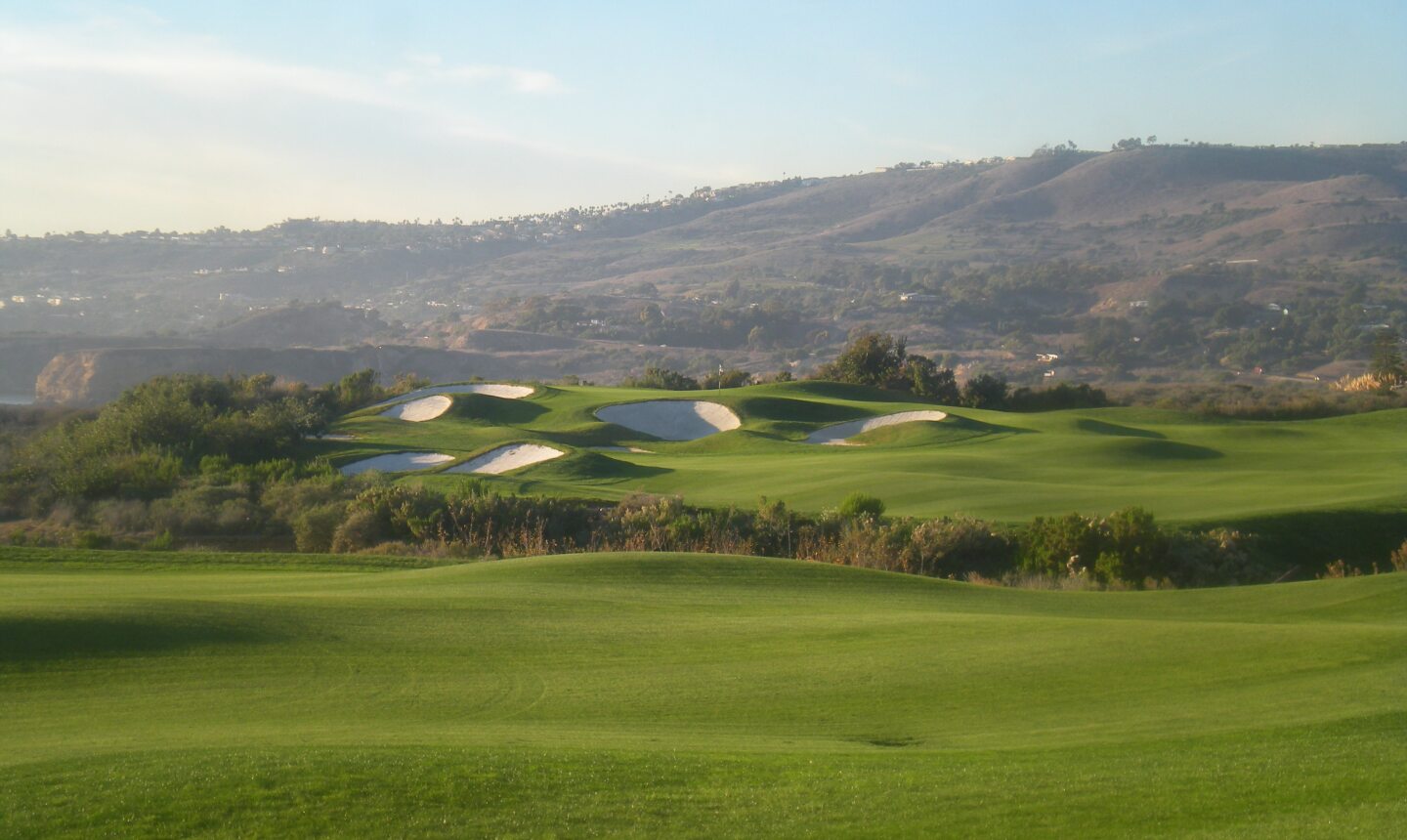 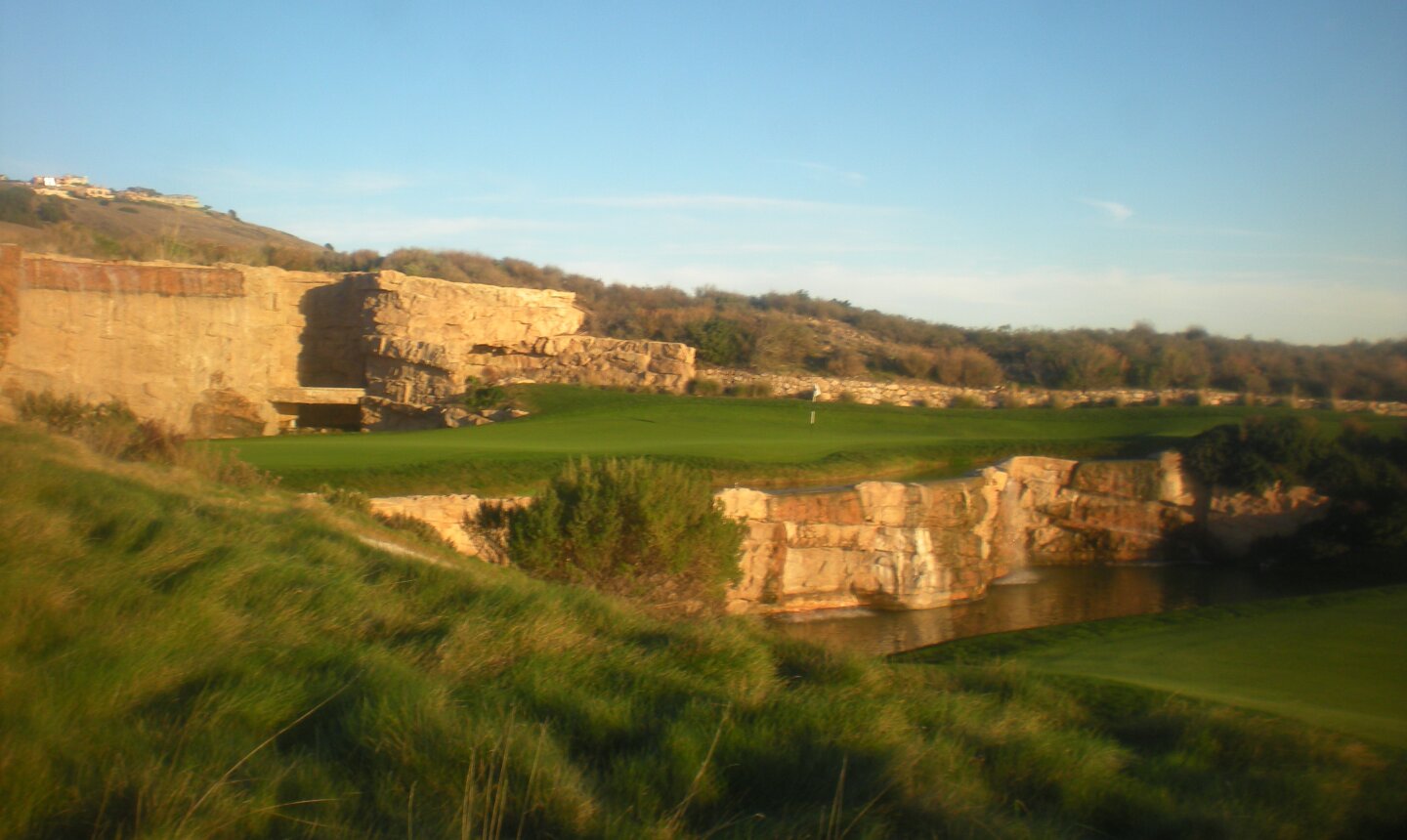 Trump transformed a plain first hole into a 340-yard par 4 that culminates in the first fake waterfall and green surrounded by water. David R. Holland/Golf Advisor 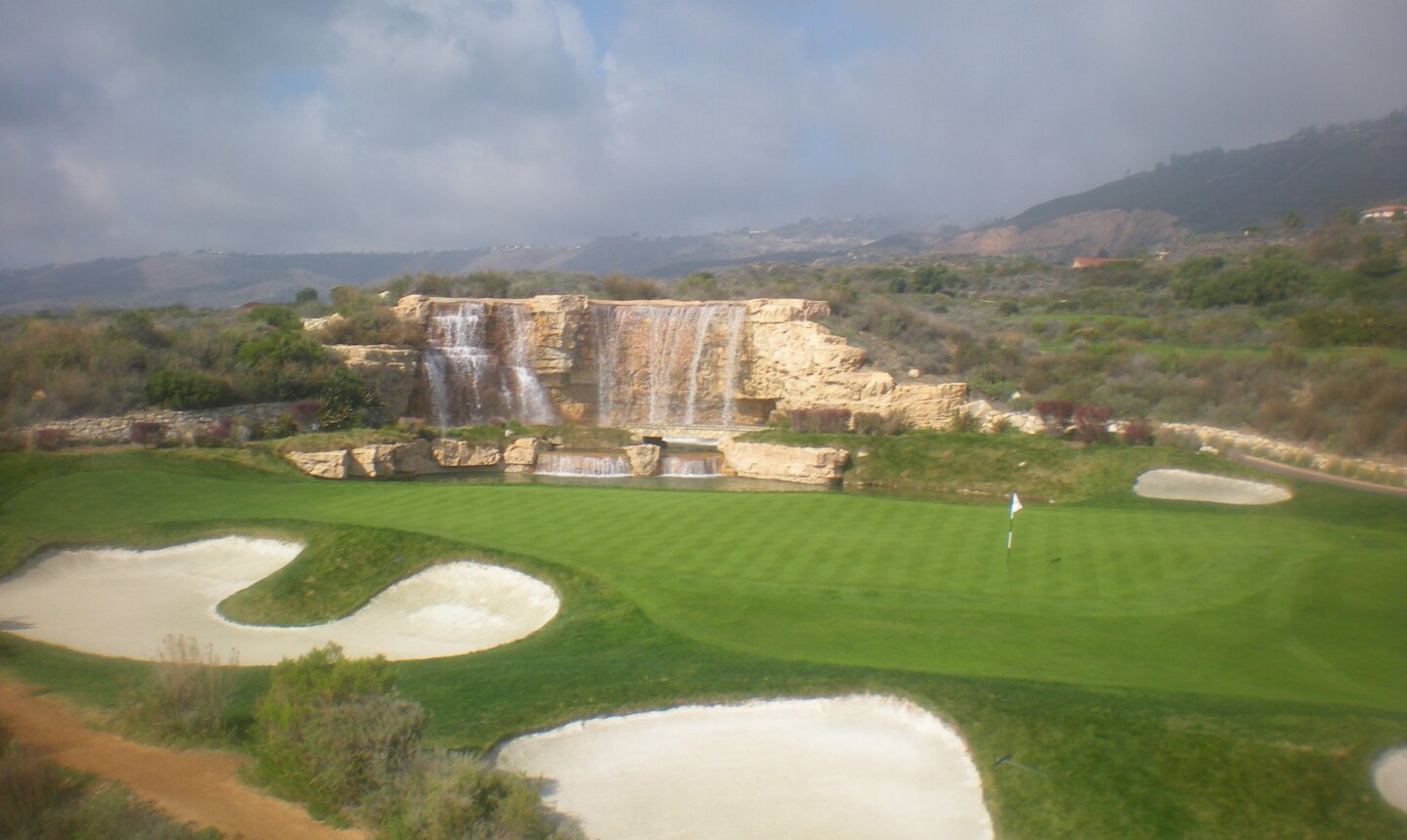 The waterfalls on No. 17 at Trump National Golf Club Los Angeles won't be for everyone. David R. Holland/Golf Advisor 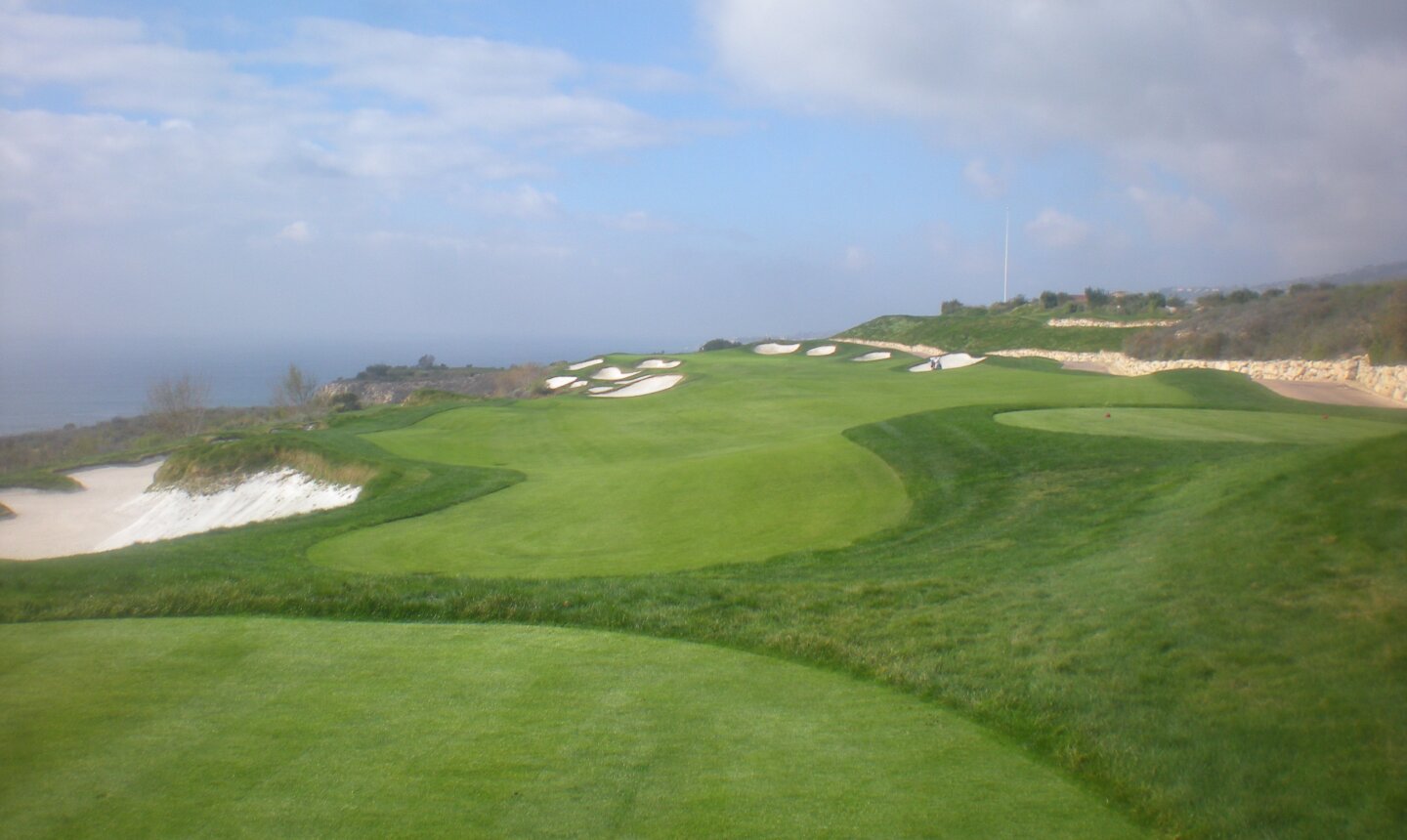 RANCHO PALOS VERDES, Calif. -- Trump National Golf Club Los Angeles is as brash as a billionaire. It screams "Lifestyles of the Rich and Famous" the moment you drive onto the manicured grounds and walk into its opulent, 45,000-square-foot clubhouse complete with chandeliers that cost more than your average vehicle.

Even better -- it calms you with a view of the Pacific Ocean and Catalina Island that's as good as California gets. One can find solitude here gazing out over the rugged, soothing views of this scenic coastline.

The facade is spectacular, but there is a hidden second life.

This is the most expensive golf course ever built ($264 million just to get it opened) -- make that re-built -- complete with three fake waterfalls over which purists cringe. Owner Donald Trump, however, thumps his chest saying those who don't like fake waterfalls can't afford them.

Trump National Golf Club Los Angeles was born as Ocean Trails Golf Club, a Pete Dye layout that was all set to open when the 18th fairway slid into the Pacific Ocean on June 2, 1999. After bankruptcy and Trump buying up the property for $27 million, the "re-design" began. It is now known as a Donald J. Trump Signature Design.

"I know for a fact that Mr. Trump walked the land countless times envisioning a new, better golf course," said David Conforti, general manager, who says No. 10 is a favorite with the surf noise in the background.

"Since it was Ocean Trails, some of the green complexes were softened, bunkers placed more smartly and he took out some of the forced carries," Conforti said. "It is now a par 71 (7,242 yards) with No. 11 playing as a 225-yard par 3. I think it is very playable with added tee box options."

Other "volcano" tee boxes were built to add a sense of the panoramas and also superior views of some fairways.

"I think Mr. Trump gave it more character with the waterfalls, the crushed white-marble sand and the flashed-up bunkers. I think he softened or took out most blind shots and improved the sightlines," Conforti said.

So here's No. 1, a plain Jane par-4 opener that made Trump cringe when he first gazed upon it. You can hear him say, "We are going to make this a great hole, 340 yards -- just add a pond in front, then the green, then the waterfall, made of natural Palos Verdes stone." Presto. Great architecture? Not quite. But it is a shaky-knee approach when you have 80 yards over water with water behind.

The 17th is another scenic, 240-yard bomb, par-3 waterfall hole surrounded by coastal scrub and cascading bunkers to the left. If you go too long you are in the froth of the waterfall runoff.

The 18th, the one I never played when I was here for Ocean Trails, has an elevated tee and a 512-yard par 4 that climbs uphill on a rumpled carpet with bunkers left and right. Go too far left and you are tumbling down to the surf. It took $61 million to rebuild this hole.

Like a portrait on the wall in a scary movie, I wonder how many golf purists rolled their eyes when Trump said Trump National Golf Club Los Angeles is "much" better than Pebble Beach? And then added the kicker: It is much better than Bandon Dunes.

Love the Trump Golf Empire or hate it -- you have to check it out. Even The Golf Channel is airing its new series "Donald J. Trump's Fabulous World of Golf."

You are even reminded of The Donald's greatness when you pick up your Trump Ice natural spring water –- the bottle has his face on it. I just don't buy that it is the best golf course in California.

There are many things I love about Trump National LA -- the views, the lushness, the exclusiveness, the ability to be out almost in solitude since it is so expensive. But there are some things I don't like -– the few stair-stepping fairways that cascade down the hillside, and a smidgen of a hook or slice gets you into deep, unrecoverable coastal scrub.

But I spent the next day playing the hallowed grounds of Riviera Country Club and spent the night in the Ben Hogan Suite. The "historical experience" at Riviera was heads and shoulders above "The best golf course in the entire state of California," as Southland Golf Magazine calls Trump National LA.

Where to stay: Terranea Resort, just a mile from Trump

Terranea Resort (www.Terranea.com) is a 582-room luxury resort that includes a 360-room hotel with 32 suites and even closer to the Pacific are its Villas, Casitas and Bungalows.

There are seven restaurants, but I picked Nelson's, named for the Mike Nelson character Lloyd Bridges played on the popular television series "Sea Hunt," filmed on-site at the old Marineland of the Pacific. The restaurant features old Sea Hunt promotional posters, a bar countertop made of recycled wine bottles and a menu that is Southern Cal.

Kira K. Dixon
Lifestyle Correspondent
Now Reading
Brash, bold and built by a billionaire: Trump National Golf Club Los Angeles
New Cookie Policy
WE AND OUR PARTNERS USE COOKIES ON THIS SITE TO IMPROVE OUR SERVICE, PERFORM ANALYTICS, PERSONALIZE ADVERTISING, MEASURE ADVERTISING PERFORMANCE, AND REMEMBER WEBSITE PREFERENCES. BY USING THE SITE, YOU CONSENT TO THESE COOKIES. FOR MORE INFORMATION ON COOKIES INCLUDING HOW TO MANAGE YOUR CONSENT VISIT OUR COOKIE POLICY.
CONTINUE
Search Near Me