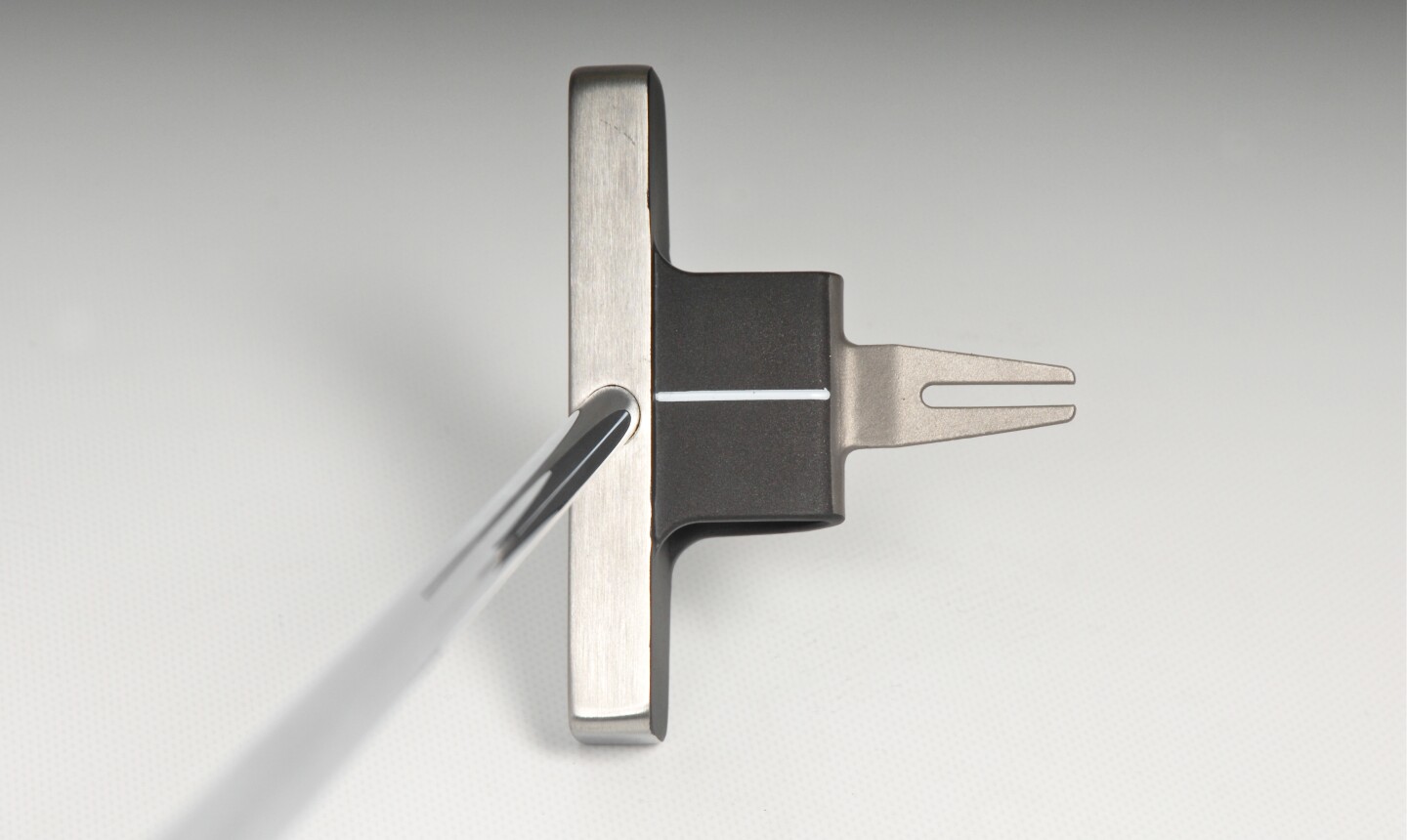 The Double Duty divot repair putter rolls the ball smoothly, and helps you make sure your line is smooth. Courtesy of Double Duty 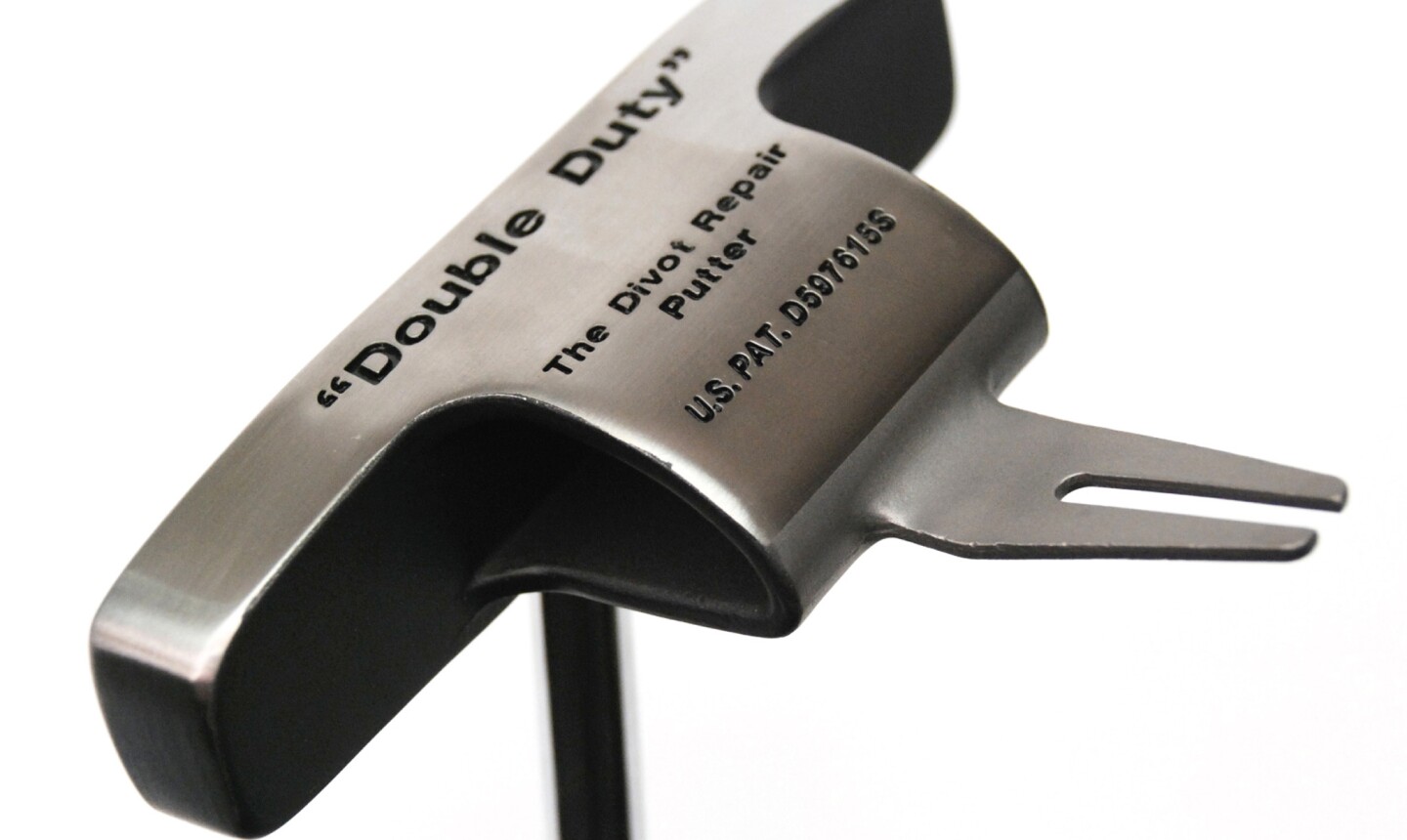 Fatigue resulting from bending down to repair ball marks is not an issue when using the Double Duty divot repair putter. Courtesy of Double Duty

When I started playing golf regularly, about 25 years ago, I played a couple of rounds with older guys who had glued suction cups onto the ends of their putter grips. They used the suction cups to retrieve their golf ball from the hole. At the time, I considered this little handy-man project to be quaint, and maybe a little sad.

Fast forward to my own 51st year on this planet, and, well, I might need to get one of those suction cups. I hurt my back over 20 years ago, and every now and then, the hole seems to get twice as deep.

Fixing ball marks on the greens also requires a lot of bending over. Although, by the looks of some of the greens on many courses, most players don't bother with the effort.

Now there's a multi-tool putter that allows golfers to repair pitch marks without bending all the way over. The Double Duty divot repair putter ($65) has two divot repair prongs protruding from the back of the putter head. According to the company Web site, a quick flip and twist of the wrist will smooth out ball marks and save your back.

On the practice green -- with the flat side of the putter head -- the Double Duty is rock solid. The blade-style head is center-shafted and perfectly face-balanced. From the back, there protrudes a sort of loop of metal, the top of which is black with an alignment line. Sticking out from the back of the loop are the divot repair prongs.

At impact, the Double Duty imparts a firm feel, with nice feedback on center vs. off-center contact. I asked Troy, a low-single-digit handicap player at my home course to take few putts with it, and he agreed: "I really like how it feels," he said. "I used to play a center-shafted putter, and the set-up is nice, too."

As for the Double Duty's divot repair function, I had a bit of trouble at first. I repair ball marks by inserting my "pitchfork" around the outside of the ball mark and pressing towards the middle. This method is impossible with the Double Duty. In fact, any method is tricky at first, as it requires some practice to get the repair tool into the turf in the right spot. More than once, I ripped a much larger chunk of turf out of the green than I was originally trying to repair.

I asked Walter Graves, inventor of the Double Duty, for advice, and he pointed me towards the video on the putter Web site (see below). The ideal method, according to the video and some materials Mr. Graves sent along, is to first press down the pitch mark with the putter (which I was doing), and then insert the prongs into the center of the mark several times to pull the depression back up toward level (which I was not doing).

With yet some more practice, I succeeded in fixing most ball marks in this way -- sort of. We've gotten a lot of rain recently, and some of my ball marks are a half-ball deep. I never could get these craters repaired with the Double Duty. Or rather, perhaps I could have, but the amount of time required to do the work was so great that I relented, pulled out my pocket divot repair tool, and fixed them in a second.

For players who like center-shafted blade-style putters, the Double Duty is definitely worth a look, especially given that it is a fraction of the price of most brand-name putters. It may look gimmicky, but the feel and roll are excellent, and the stock pistol-grip fits nicely in the hand. The foam and Velcro headcover is somewhat awkward to put on and doesn't fit well. I tended to leave it off but worried a bit that the divot repair tool would scrape my other clubs.

As for the second function of the Double Duty Putter -- the ball-mark-repair function -- I can certainly see the appeal, especially for older or injured players who cannot bend over, or who would simply prefer not to. It'll take some practice (and patience) to work properly and completely, though. On the other hand, there are so many players on every course who do not repair their ball marks, maybe the Double Duty would get them to at least try to fix them.

And if you glue a suction cup onto the grip-end of the Double Duty, you may never have to bend over again!

For more information, and a video lesson on how to fix ball marks with the Double Duty putter, visit www.divotrepairputter.com.

Right Handed Golfer's - turn the putter head to the right, hold putter by the grip on about an 80 degree angle, PICK at the ball mark, not pick around it but in the ball mark, this will fluff up the grass and dirt in the ball mark, then you pat it down with the sole of the club until level with the ground. By doing this properly when the greens are watered at night and cut in the mornings you will not be able to find you ball mark if done properly. 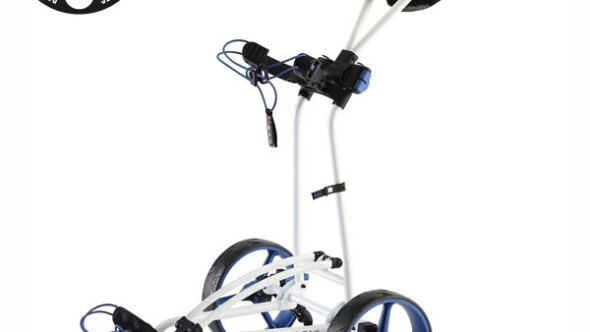 Articles
BIG MAX Autofold FF golf push-cart folds flat, opens big
The BIG MAX Autofold FF cart is the newest offering from the largest golf cart (trolley) company in Europe, and it is one clever and classy push-cart. It folds up flatter, and unfolds more spaciously, than any push-cart I have ever used.
2 Min Read