Eagle Landing at Oakleaf Plantation is a playable playground south of Jacksonville, Florida 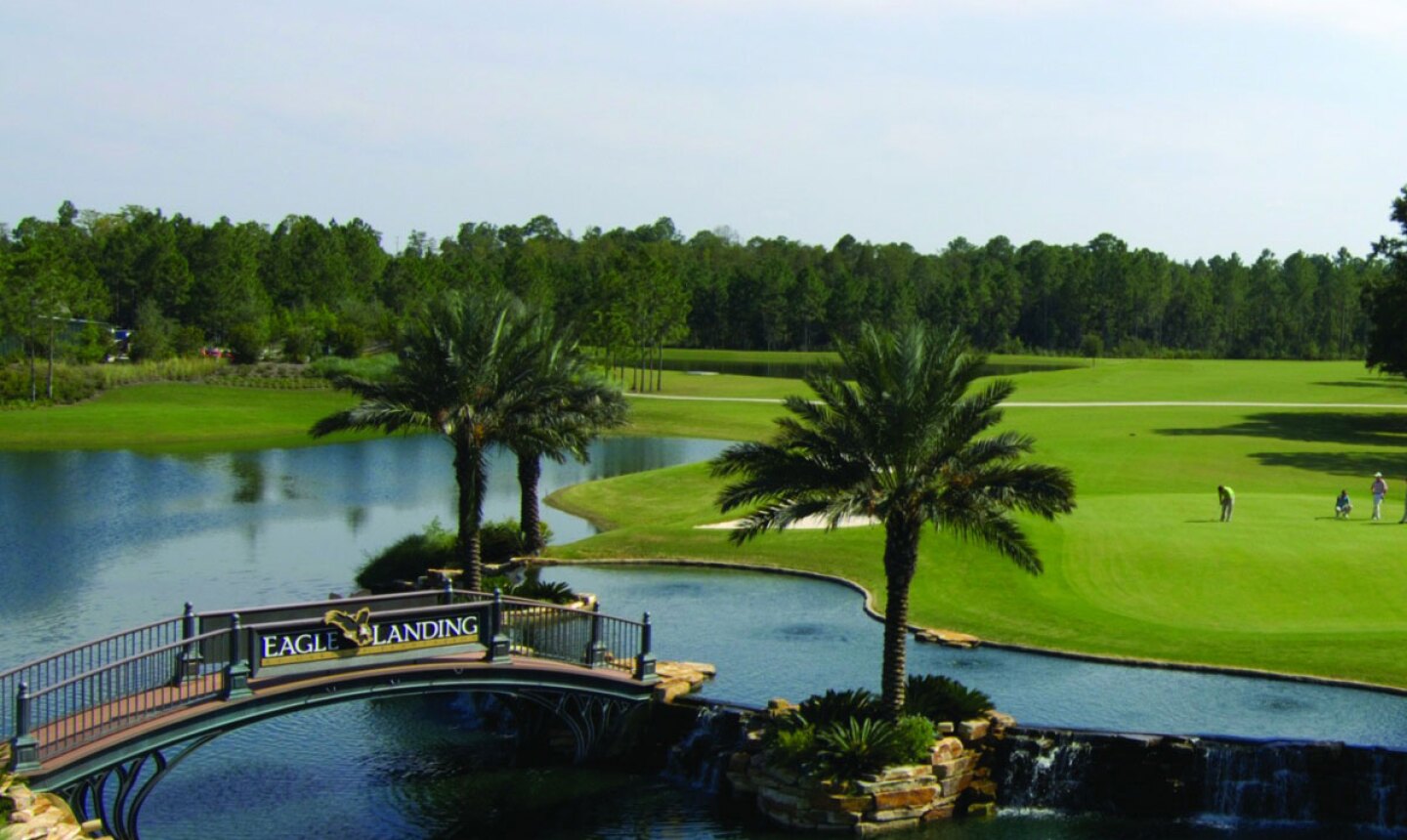 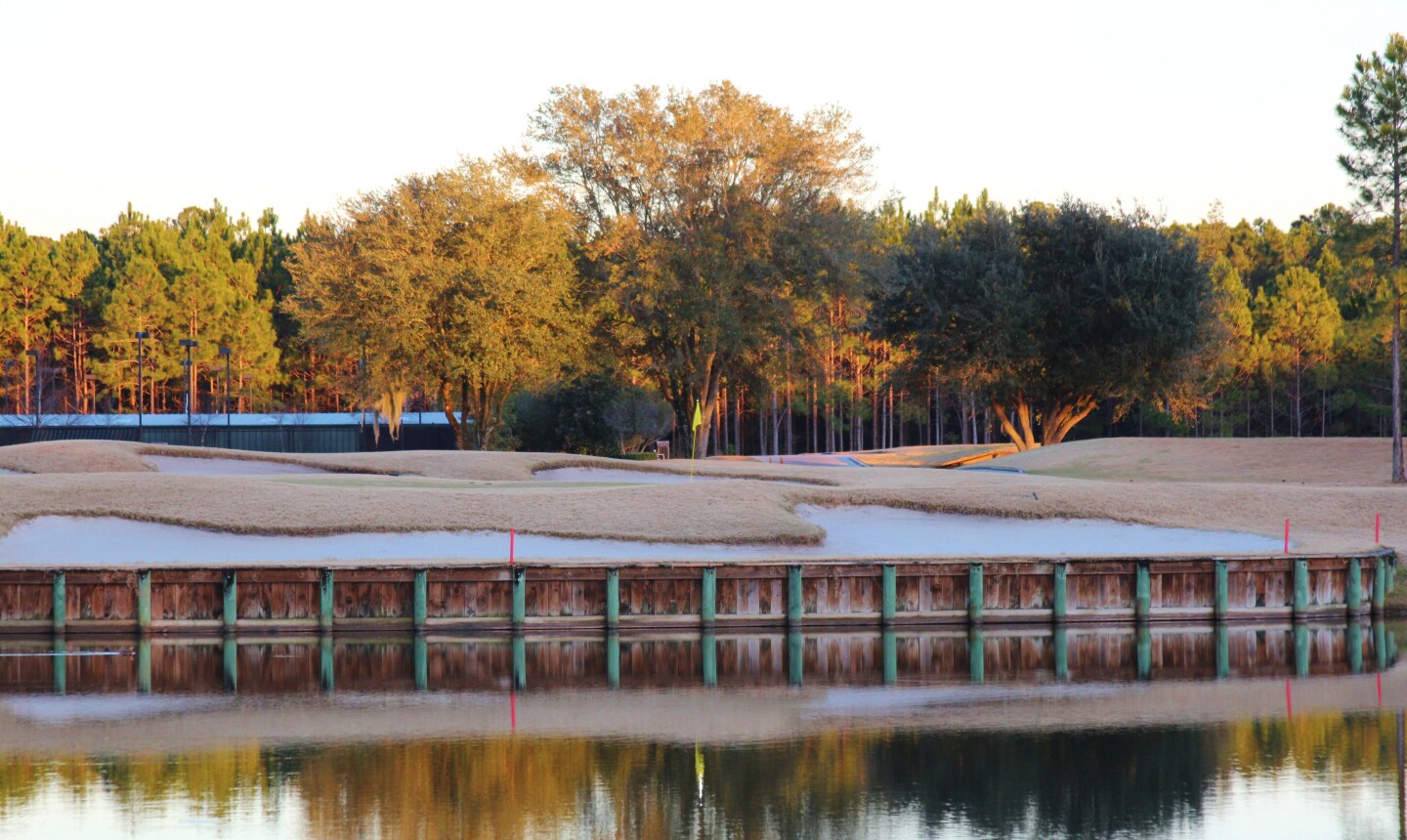 A pond frames the left side of the 18th at Eagle Landing at Oakleaf Plantation. Jason Scott Deegan/Golf Advisor The clubhouse at Eagle Landing at Oakleaf Plantation glows in the sunset. Jason Scott Deegan/Golf Advisor

ORANGE PARK, Fla. -- Architect Clyde Johnston built just enough unique features on Eagle Landing at Oakleaf Plantation to stand out among the best golf courses on the south side of Jacksonville.

Johnston, who has designed three other courses in greater Jacksonville, incorporated a waterfall, a church-pew bunker and bookend par 4s around the same pond to finish each nine. More than anything, those who play Eagle Landing will likely remember their score more than any particular hole. Johnston deserves kudos for designing a 7,037-yard layout that rewards good shots and doesn't devour bad ones. Weekend warriors tend to miss their fair share of shots. Johnston gives them enough room for second and third chances.

There are six sets of tees, which is more than most clubs. Men can play from 6,764 yards on the blues or the 6,359-yard whites. The 5,894-yard green tees cater to longer-hitting ladies, senior men or high-handicappers. There are even yellow youth tees, perfect for the beginner, at 2,789 yards.

"People like Eagle Landing for its playability. It's fair," said Tim Spangler, the director of golf at Eagle Landing. "It is usually in good condition. Golf today is such a luxury item. The last thing you want to do is shoot 120 and lose lots of golf balls."

Johnston, a fan of classic architecture, built a course that delivers a linksy feel with wide, fast fairways and big greens. Players can bounce shots up onto the greens and putt balls that just miss around the edges. Water remains a factor on only five holes, especially at Nos. 9 and 18 and the par 3s at Nos. 6 and 16.

Johnston's par-5 holes stand out. The 600-yard seventh is the No. 1 handicap thanks to an intimidating pond guarding the left side off the tee. The 10th bends left with a green that is reachable in two. Just don't miss long. The back of the putting surface slopes into the waterfall visible on the drive into the subdivision. This is Spangler's favorite spot on the course.

"Every hole should have a waterfall," he said. "It's just so soothing."

A massive bunker with six grassy humps called church pews, a tribute to the famous Oakmont Country Club in Pennsylvania, tends to gather up loose tee shots on the par-5 17th. Spangler said Johnston had to take out a few pews before the course opened to soften the penalty for landing there.

"It's so big. The players hate it," Spangler said.

That's not entirely true. Sometimes, the golf gods allow safe passage through the pews. David Bammer, a regular customer who visits from Michigan, lauds its design, even if he's had to wedge it out a time or two.

"For such a short par 5, that's a great feature," Bammer said.

It was no coincidence I shot my lowest score of the four rounds I played in and around Jacksonville at Eagle Landing. All my drives rolled out farther because of the firm conditions and the green complexes weren't overly penal. It's a golf course that strikes a great balance between providing enough challenge to make it interesting, while staying fair.

Kira K. Dixon
Lifestyle Correspondent
Now Reading
Eagle Landing at Oakleaf Plantation is a playable playground south of Jacksonville, Florida
New Cookie Policy
WE AND OUR PARTNERS USE COOKIES ON THIS SITE TO IMPROVE OUR SERVICE, PERFORM ANALYTICS, PERSONALIZE ADVERTISING, MEASURE ADVERTISING PERFORMANCE, AND REMEMBER WEBSITE PREFERENCES. BY USING THE SITE, YOU CONSENT TO THESE COOKIES. FOR MORE INFORMATION ON COOKIES INCLUDING HOW TO MANAGE YOUR CONSENT VISIT OUR COOKIE POLICY.
CONTINUE
Search Near Me