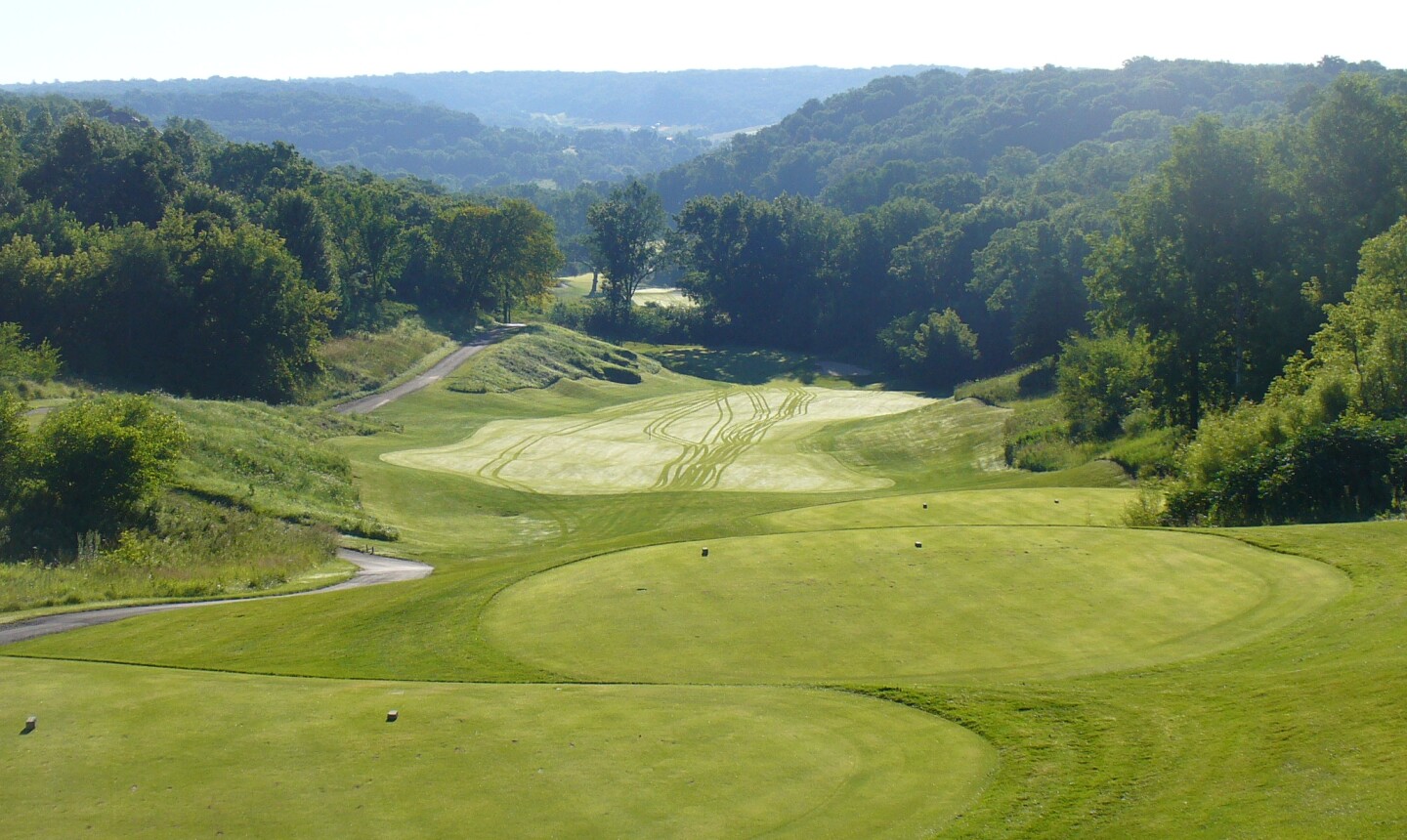 The first tee on Eagle Ridge's General Course beckons players to a round of fabulous resort golf. Kiel Christianson/Golf Advisor 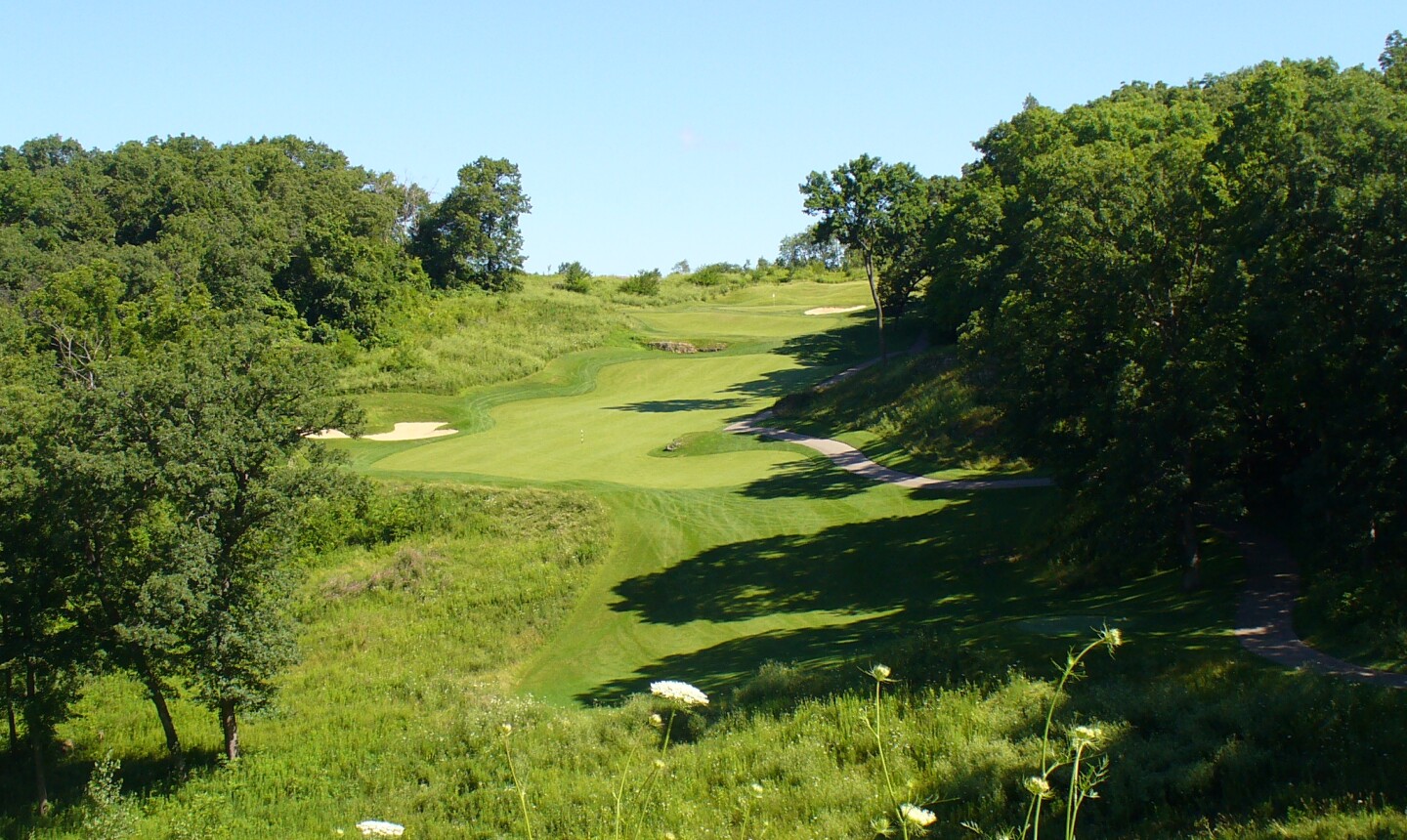 The tough tee shot at the 407-yard 17th hole on The General at Eagle Ridge. Kiel Christianson/Golf Advisor 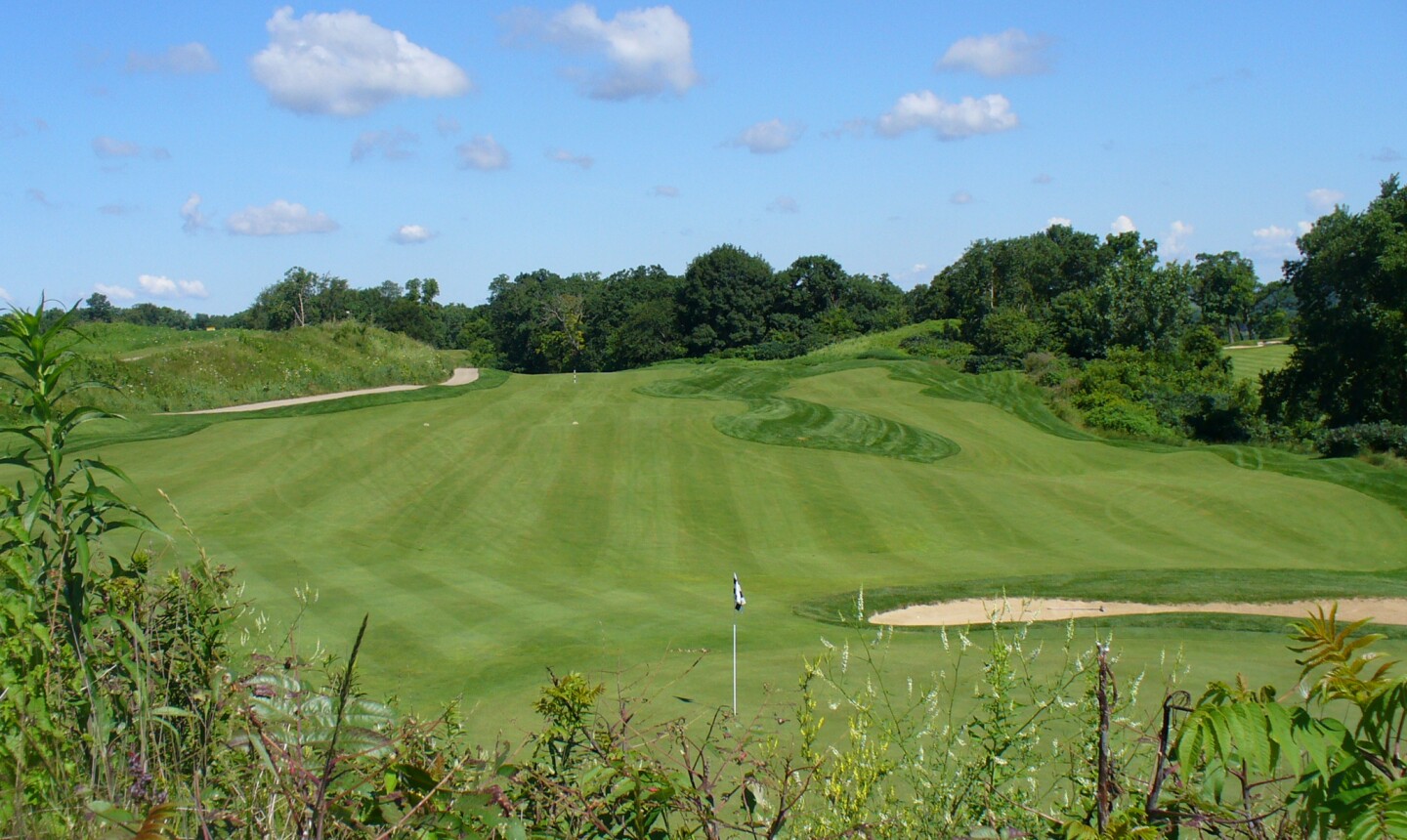 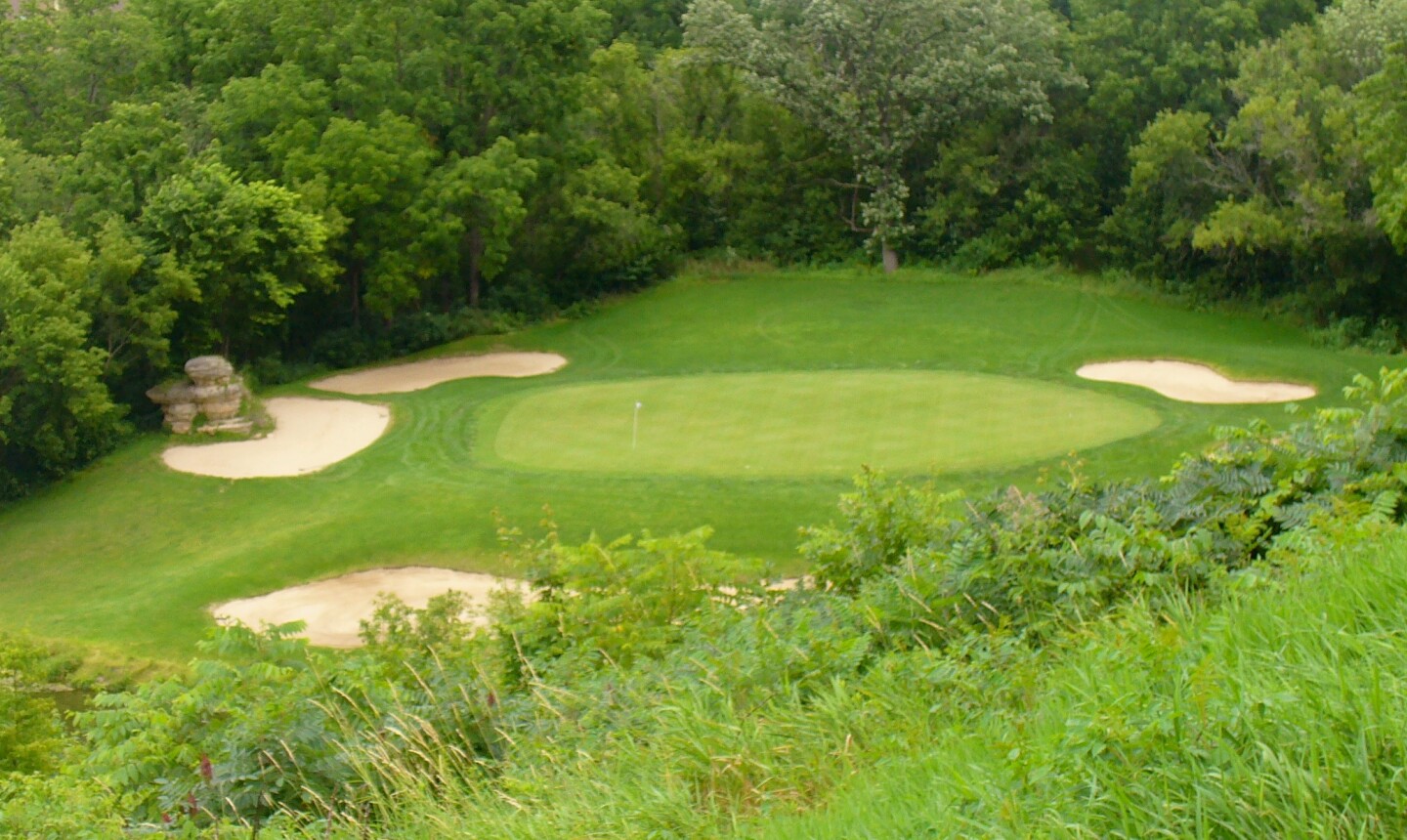 On the North Course at Eagle Ridge, the fun really begins on the 165-yard eighth hole. Kiel Christianson/Golf Advisor 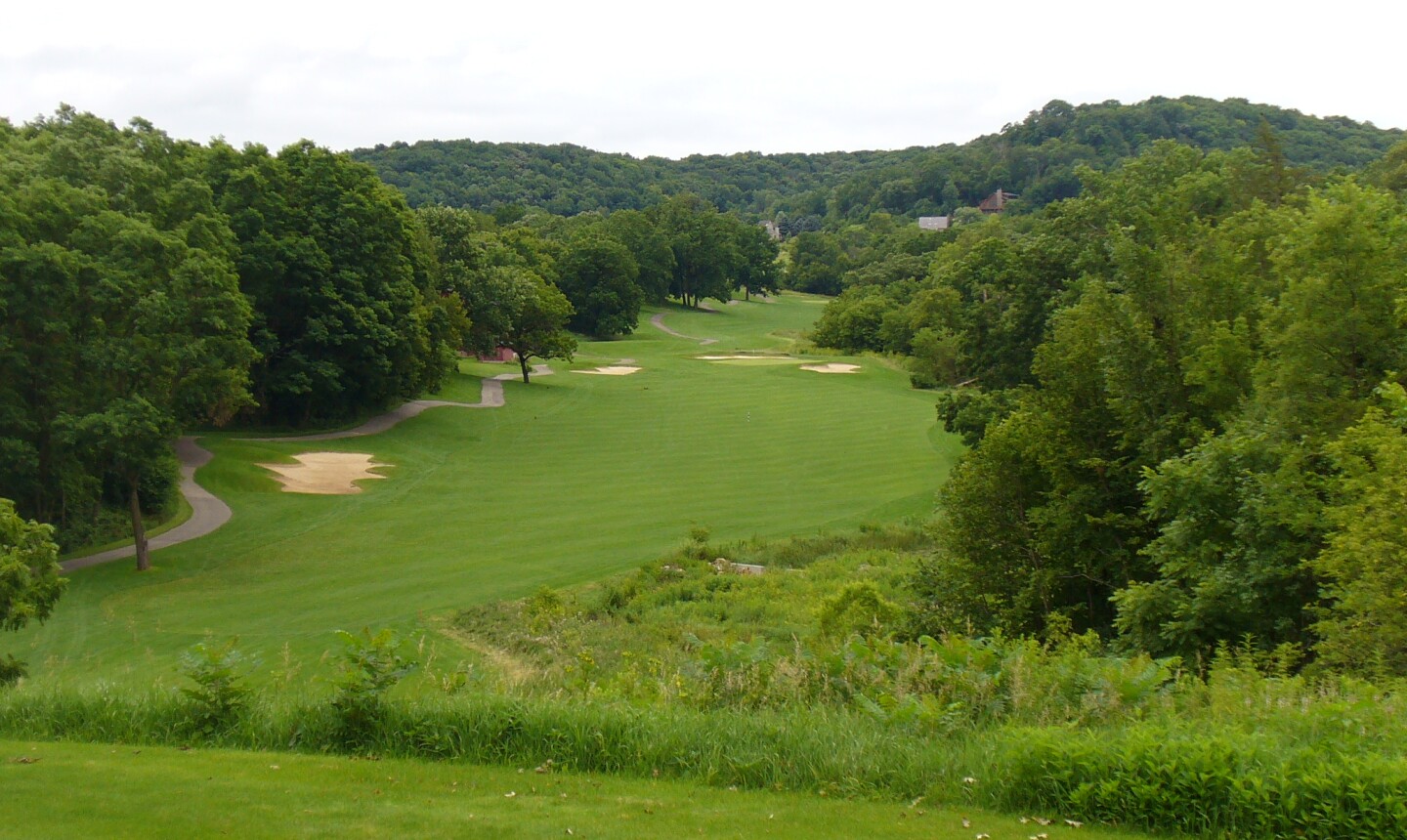 The tee shot at the 533-yard 11th hole on the North Course at Eagle Ridge. Kiel Christianson/Golf Advisor 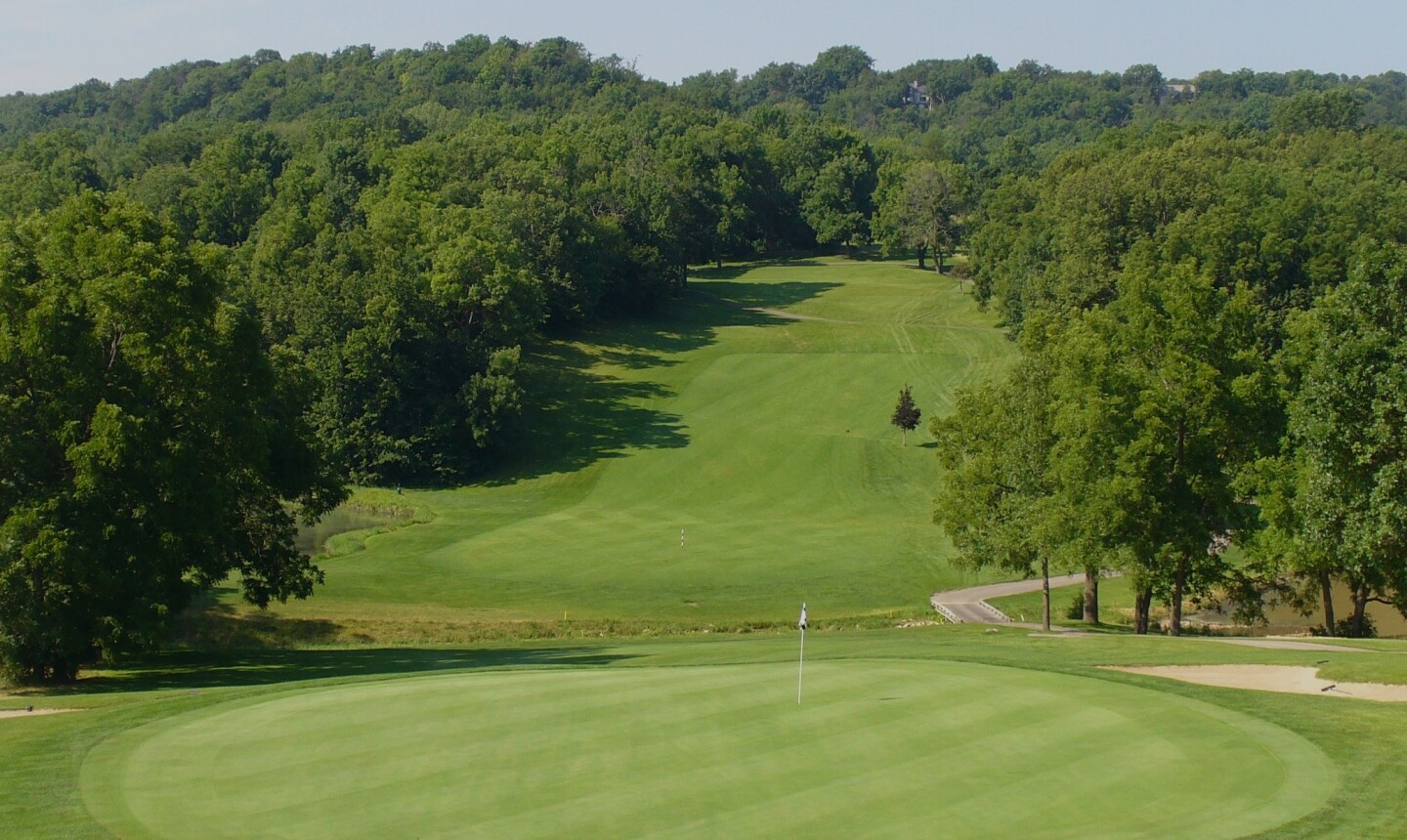 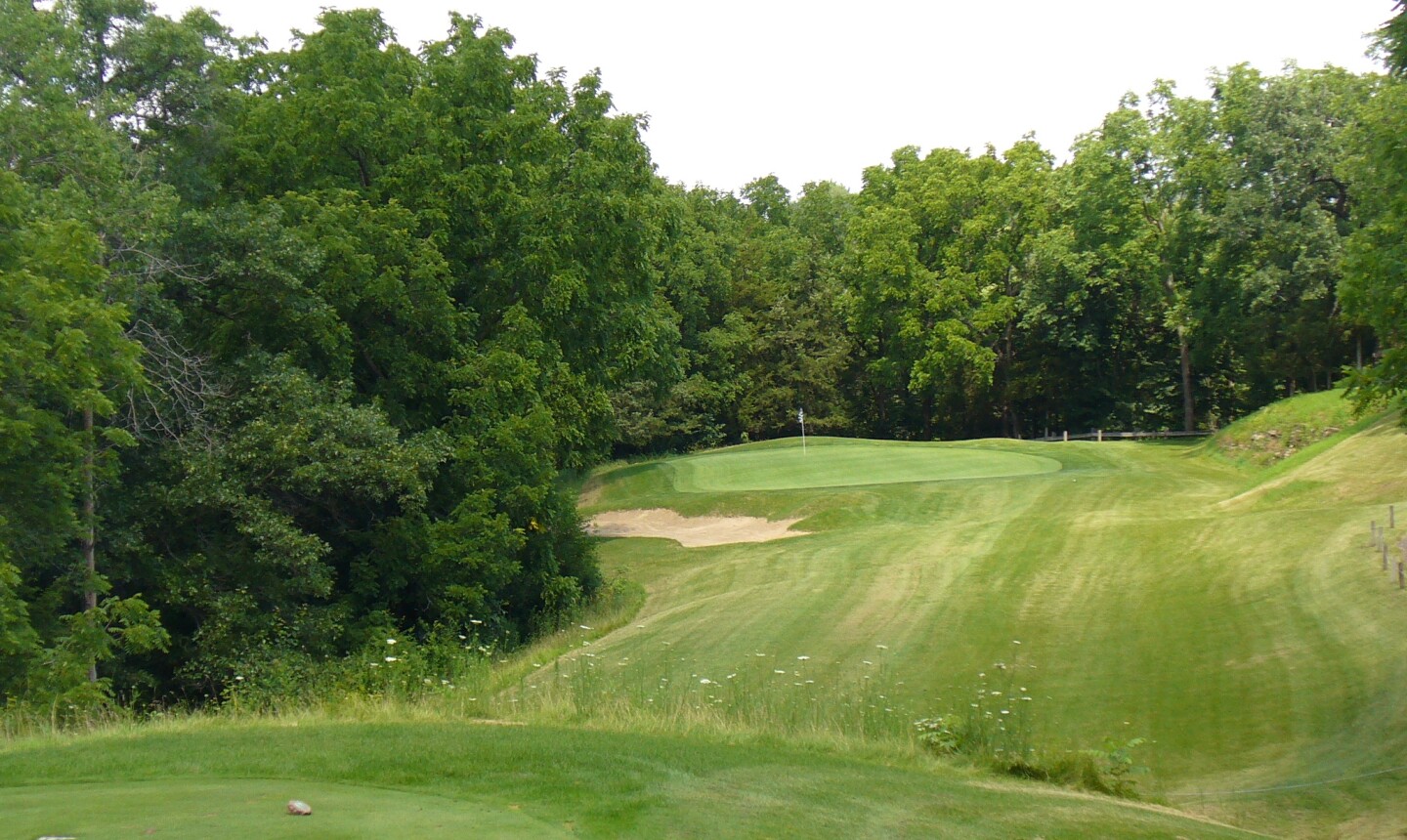 The green on no. 7 on the South Course at Eagle Ridge. Kiel Christianson/Golf Advisor 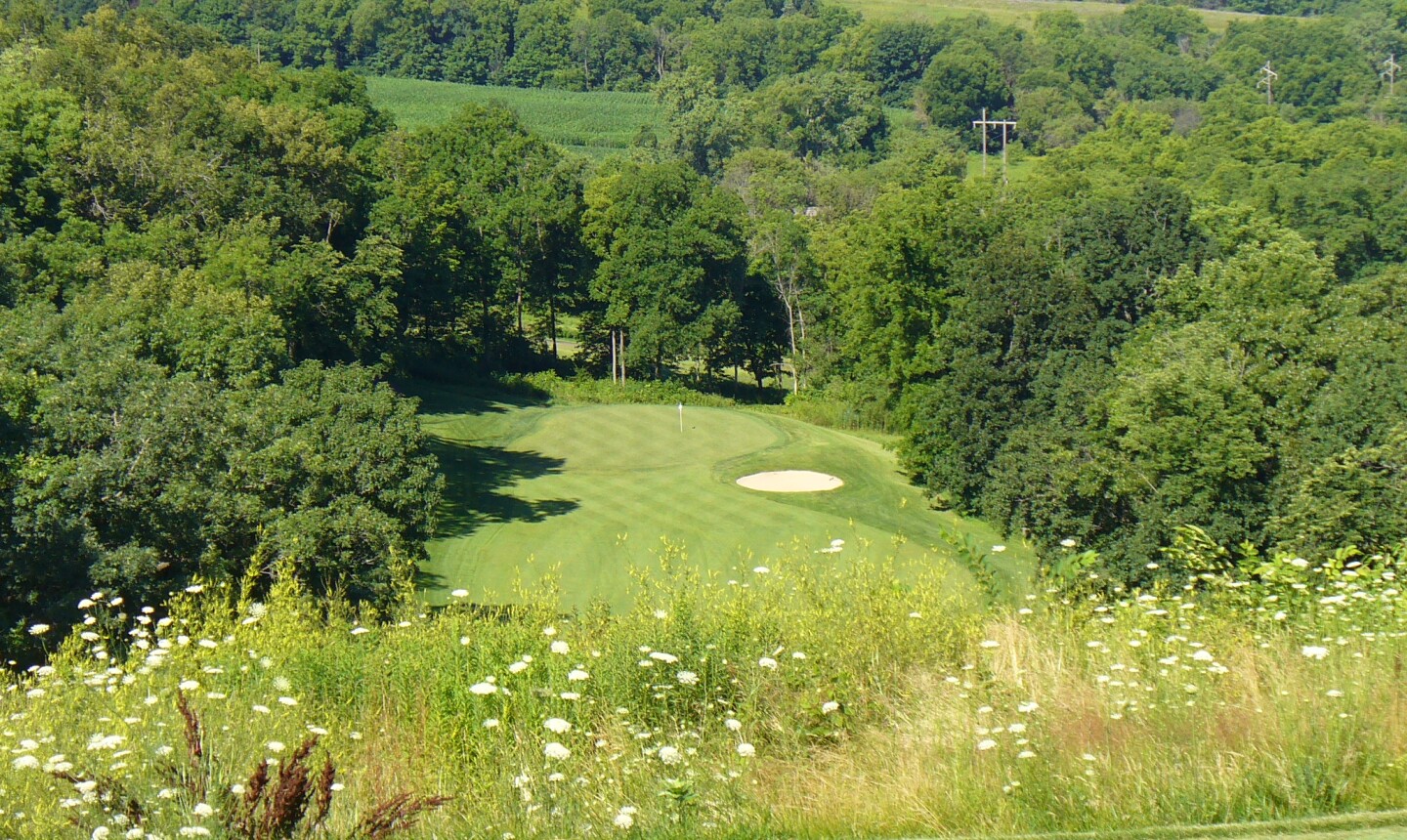 No. 14 on The General at Eagle Ridge is the most fun you can legally have on a golf course. Kiel Christianson/Golf Advisor

Eagle Ridge Resort & Spa is the original Illinois golf resort -- and it's still the king.

GALENA, Ill. -- Golf course architects have to walk a fine line when designing resort courses. On one hand, many, if not most, of the golfers on these courses are first-time or once-a-year visitors.

So resort courses should not be overly deceptive off the tee or on the greens -- in other words, they should not be courses you have to play multiple times to appreciate and play reasonably well.

On the other hand, resort courses need to be memorable so that visitors will want to come back. With this in mind, the relatively forgiving nature of the ideal resort course needs to be camouflaged by visual beauty -- arresting vistas and unforgettable character that produce enough "wow factor" to guarantee a return visit.

The General at Eagle Ridge Resort & Spa is the epitome of resort-course design. The 6,820-yard Roger Packard and Andy North design is the newest of the four golf courses at Eagle Ridge Resort just outside the historic town of Galena, and it's the track that guests plan their golf vacations around.

The resort's other two 18-hole courses, the North Course (6,875 yards) and the South Course (6,727 yards), along with the nine-hole East Course (2,648 yards), all traverse the same heaving and plunging topography unique to this northwest corner of Illinois. But it is The General that takes the best advantage of the dramatic landscape, presenting golfers with hole after hole after hole characterized by two words that sum up the very best resort golf: "Fun!" and "Wow!"

In talking with some of the resort management before I teed it up on the North, South and General Courses, a frequent comment I heard was that the South (or North) was equally deserving of praise as The General, which, according to Dan Schreiber, Eagle Ridge's tournament coordinator, "Is all carry off the tee -- if you can get off the tee, you're golden."

But therein lies the very secret to The General's brilliance: It allows you to enjoy those tee shots.

Eagle Ridge's North Course, opened in 1977, and the South Course, opened in 1984, are both stout tests, with narrow fairways snaking through dense woods. But the combination of elevation changes and multiple doglegs have the effect on both of these older layouts of taking driver out of the hands of longer, and/or crooked, hitters. In the yardage books, there is hardly a hole on either course on which the "preferred" landing area lies beyond 250 yards from the tips (usually around 225 from the regular men's tees). Moreover, many of these landing areas are blind or semi-blind -- over hills, around corners or uphill from the tees -- so players rarely get to enjoy watching their balls land safely in the fairway (or see where the balls go if they are offline, which can be frustrating).

The General opened in 1997, and perhaps it was a more enlightened take on resort golf, or the input from two-time U.S. Open champ Andy North, that produced a different philosophy. Here almost every hole features an elevated tee with broad, clear views out over the fairways below. Players get to watch drive after drive sail majestically out over generous, beautifully framed landing areas. Nothing is hidden -- not bunkers, not hazards, not water -- so even first-time players can see the lines they should try to take.

The General is still a stern test for golfers of every playing level. But it is the sort of test you do not have to study for during multiple rounds. During my time at Eagle Ridge, I ran into dozens of groups of golfers, all of whom had been coming back to the resort year after year for 12, 16, 20, even 25 years. Without fail, these players said their favorite course was The General, but the ones who'd been coming back the longest were also more likely to express appreciation for the North and the South Courses as well -- they just take time to grow on you.

Highlights from The General at Eagle Ridge

The General, named after former Galena resident Ulysses S. Grant, grabs your attention and imagination from the very first hole -- or at least it did mine.

The wide fairway slides downhill toward a gooseneck approach to a green nestled into a shady dell with trouble on three sides. Like many of the greens on The General, the worst trouble lies just off the putting surface, so there is a premium on accuracy with your approaches.

Nevertheless, the greens here -- and on the other courses -- are huge and, given the undulating topography, nearly devoid of breaks. In fact, most first-time visitors will likely over-read most putts. Where there is break, it is very obvious.

It is the tee shots at The General that players will remember the most, though. My notebook is filled with the phrase, "Another great driving hole!" The reason is that, with only a couple of exceptions, the landing areas are fully visible off the tees, as is the trouble you want to avoid. The most memorable is certainly the 357-yard 14th hole, where a nearly 100-foot drop from tee to fairway allows bombers to try to play it like a par 3. More fun cannot (legally) be had on a golf course.

The General's green complexes are also memorable, even if the putting surfaces are relatively drama free. Take the green at the 372-yard eighth, which is cut into an amphitheater of limestone, the likes of which I've never seen anywhere else.

There is a reason that The General was just named the fifth best public course in Illinois by a major print magazine -- and, having played several of the higher-ranked courses myself, I would say it deserves to be bumped up a few spots.

Highlights from The South Course at Eagle Ridge Resort

Eagle Ridge's South Course challenges first-timers with difficult club selections off the tees, especially if you're not playing the tips (which you simply should not do if your handicap is over 5). Fairways curl around doglegs and disappear over hills, sometimes resulting in well struck shots ending up in poor positions (or lost). There is an abundance of left-to-right doglegs with dense woods on the right of the fairways, setting up for confident fades but punishing slices severely.

This is not to say the South Course is not enjoyable -- it has some very fun holes, and if your tee shots generally end up in the short grass, some of the approach shots will stay with you for a long time. It's just that if you are unfamiliar with the course, you'll need to pick a line and a club based on the yardage book and hope the ball goes where you aim.

The 406-yard closing hole is probably the most fun to play, as it is one of the few holes with a landing area that is wholly visible from the tee. Club choice is still key, though, as a stream cuts across the fairway about 250 yards down the hill. If you want to carry it, you'll need to carry your drive at least 280 yards.

The North Course is maybe the best one to start out on to get a feel for the landscape and the large, minimally breaking greens. After a wide-open first hole, the fairways tighten back up on the 533-yard, par-5 second, where the S-shaped fairway takes anything longer than a 5-wood or hybrid out of your hands.

The fun really begins on the 165-yard, par-3 eighth hole, which plays more than 50 feet downhill to a massive green partially obscured by the edge of the teeing grounds. To the left of the green is a picturesque natural limestone stack, and when you head down the hill, you realize you were also teeing off over a small inlet of Lake Galena. This is one of the most memorable holes on any of Eagle Ridge's courses, and one of the prettiest three-shotters in the state.

On the back nine, the North Course finally opens up off the tee, starting out with a completely visible landing area on the 512-yard 11th -- such a joy to see your ball land! And the 16th (180 yards), 17th (439 yards) and 18th (420 yards) holes are three artfully designed closing holes that will beckon you back to this original layout.

Eagle Ridge is the original Illinois golf resort, and it is still the king. In June 2013 a new management company took over the resort, and Colin Sanderson, director of sales and marketing, told me that the goal is to bring Eagle Ridge's courses and facilities back to where they were when the property was the pinnacle of Midwestern golf resorts.

"We're trying to get the courses back to how they were originally designed," Sanderson said. "The native grasses and scrub had grown up all over, and players were losing balls right off the first tee. No one wants to spend their day looking for balls."

To this end, the resort has invested a half-million dollars in new maintenance equipment and has mown the hazards back away from the fairways, opening sight lines where possible and widening fairways and rough. All the while, green fees remain extremely reasonable, ranging from $55-$135.

These measures are reviving the true spirit of resort golf, striking the perfect balance between challenge and fun, so that golfers will return year after year.