From horsin' around to playing a round, Revelstoke Golf Club is steeped in history 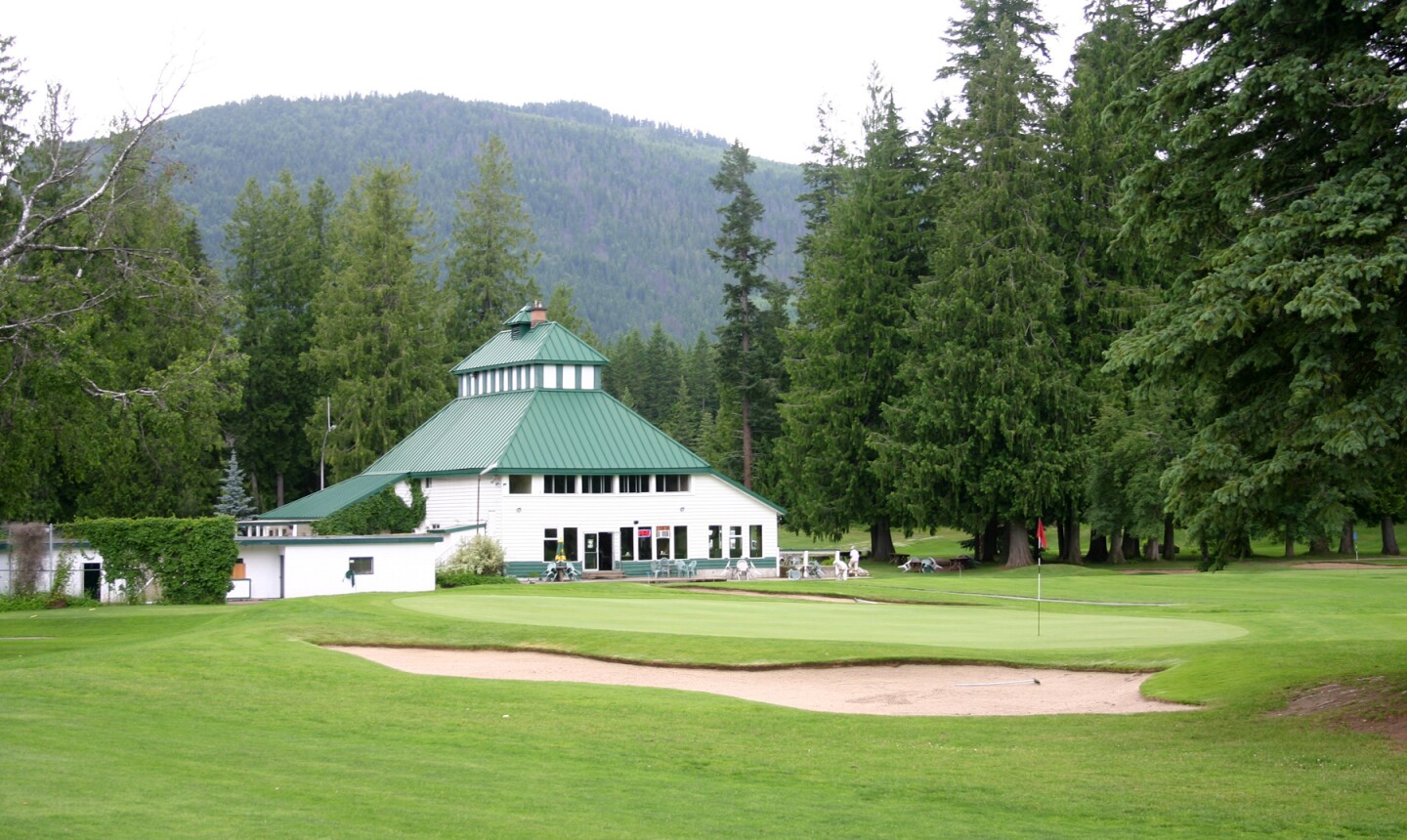 The clubhouse at Revelstoke Golf Club dates back more than a century. Wes Gilbertson/Golf Advisor 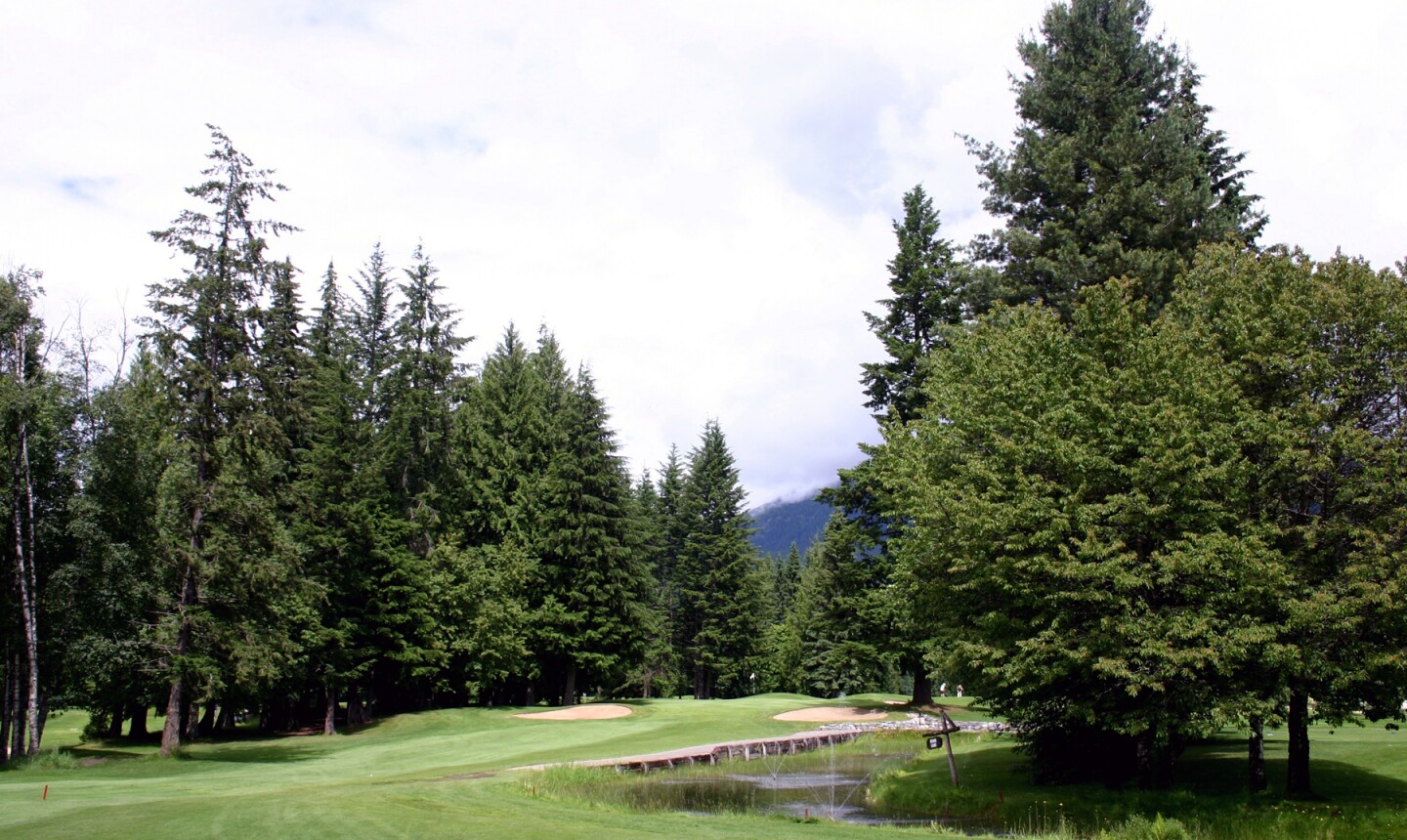 The front nine at Revelstoke Golf Club, which was added in the mid-1970s, has more bite than the back. Wes Gilbertson/Golf Advisor 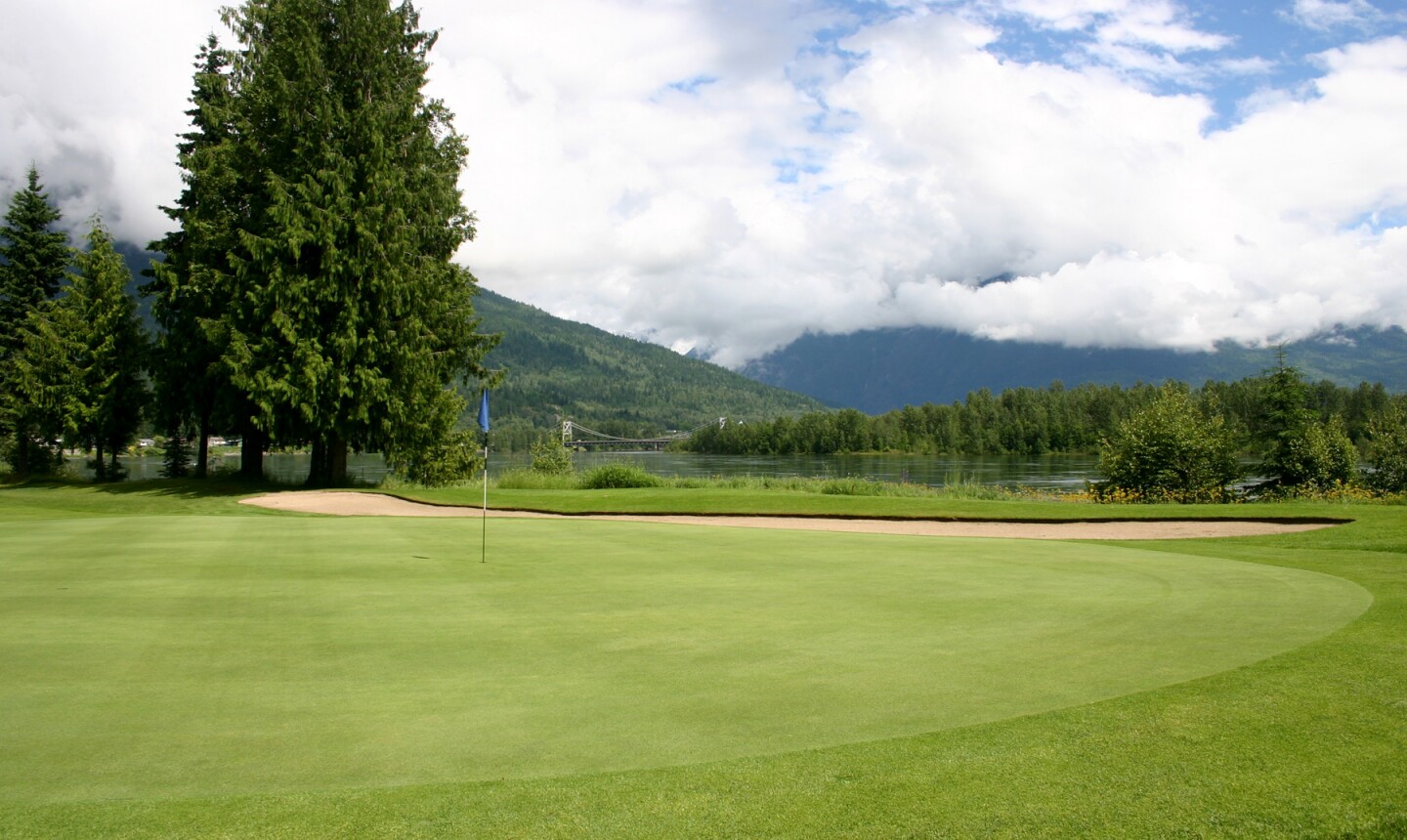 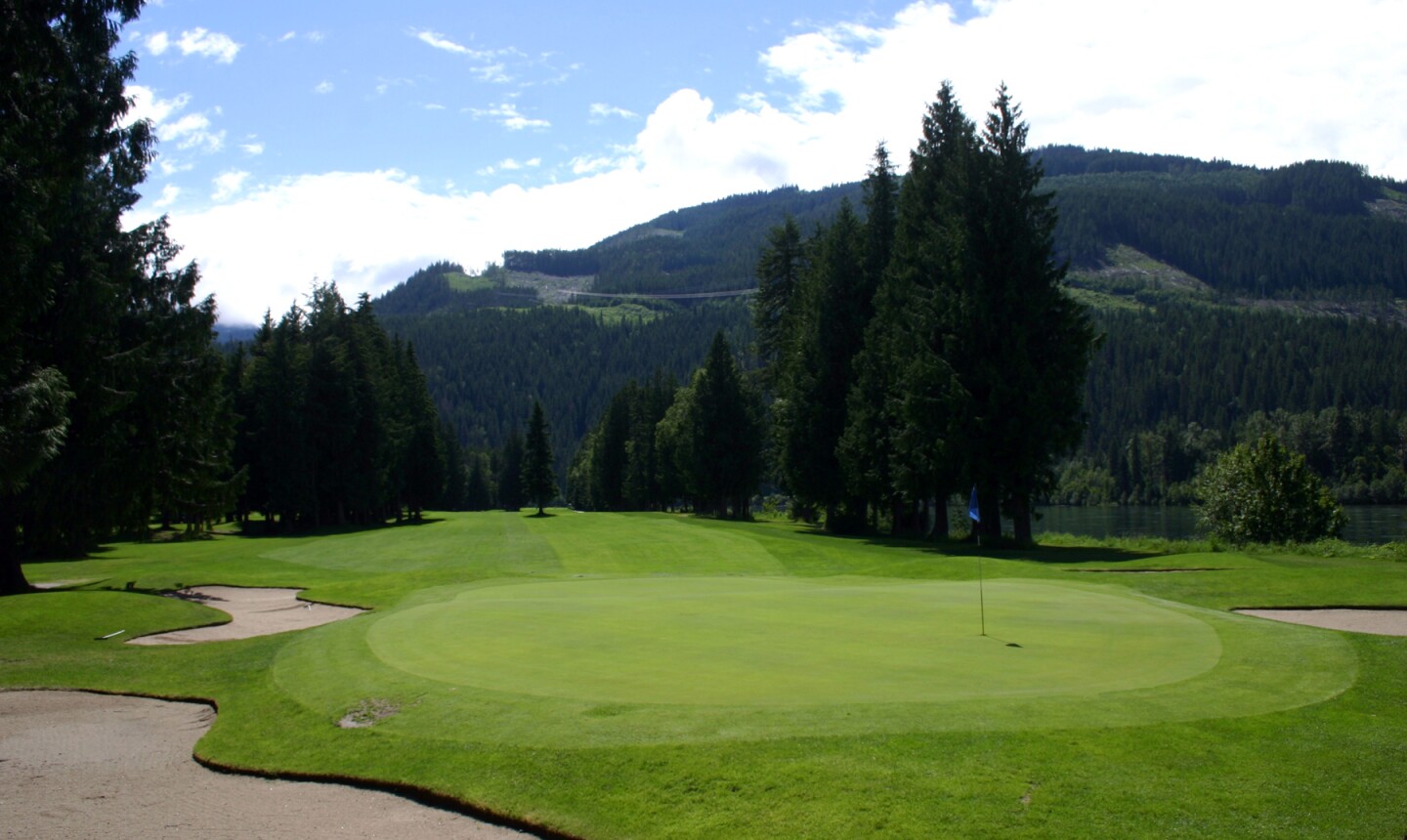 Revelstoke Golf Club is the only 18-hole course for about an hour in any direction. Wes Gilbertson/Golf Advisor 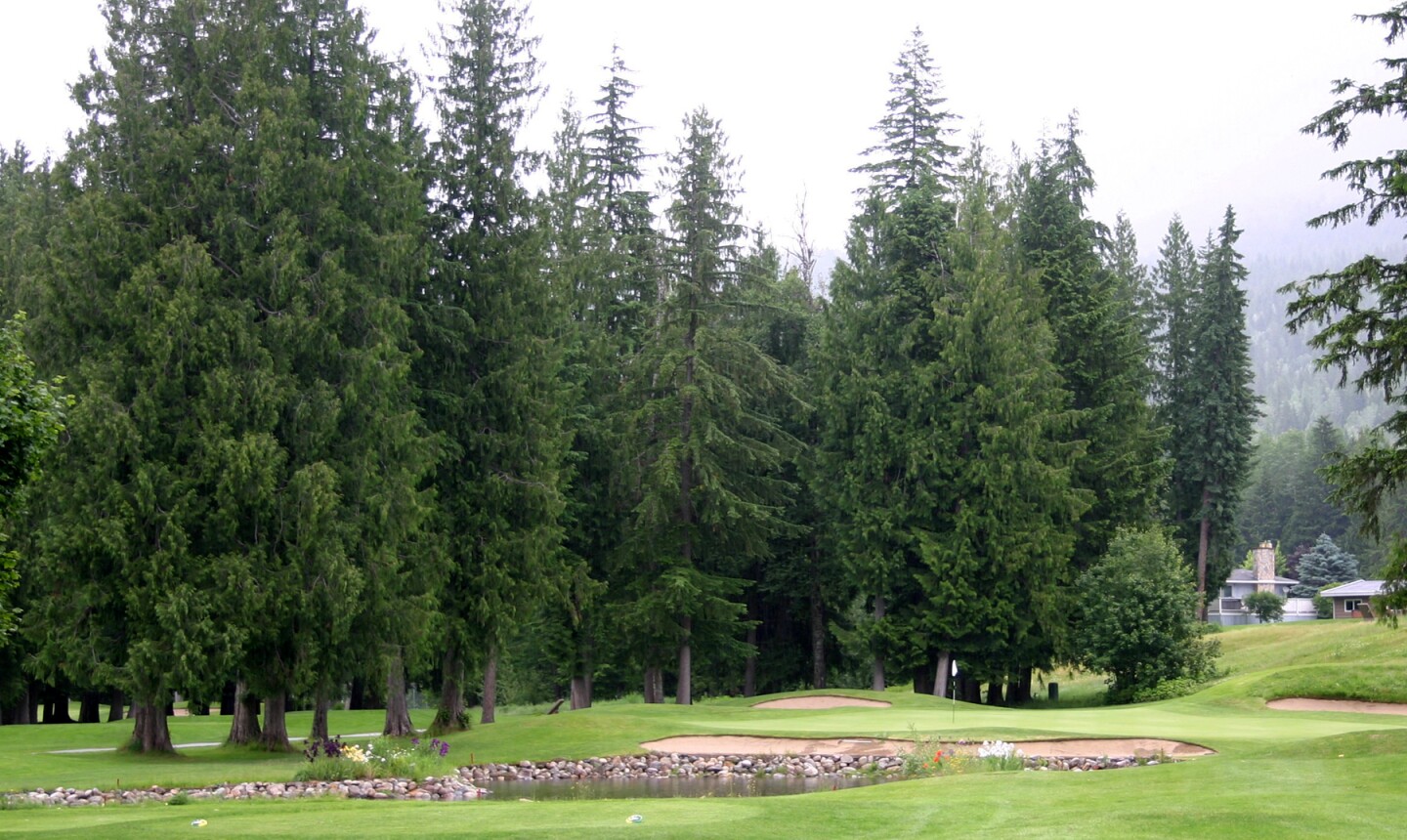 The 17th hole is one of three par 3s on the back nine at Revelstoke Golf Club. Wes Gilbertson/Golf Advisor

Long before anybody was haggling over strokes on the tee, Revelstoke Golf Club was the site of another form of gaming.

"It was originally an equestrian track, and you can kind of see it," said John Franks, the head professional at Revelstoke. "I mean, why else would you build a green like No. 12 that's kind of on an angle? But that was the corner of the track. You can see a bit of the banking."

Revelstoke, set amid the mountain peaks and timbers along the Trans-Canada Highway, is best known as a pit stop between the Alberta Rockies and Canada's West Coast.

In the old days, jockeys would hop off the train in Revelstoke to run their horses on the track. Today, road-weary golfers often pause for a few hours to zip around the gentle, tree-lined layout.

The back nine at this 6,537-yard setup dates back to 1924, when grass was planted on the ground once trampled by thoroughbreds.

There are several black and white photos of the racetrack and grandstand on the walls in the clubhouse. What you'll notice is the one-of-a-kind centerpiece -- which has a peaked green roof and now houses a pro shop, locker rooms and restaurant -- hasn't changed a bit.

In fact, the clubhouse at Revelstoke Golf Club, complete with an old lookout tower to keep an eye on the races, dates back more than a century.

"This is a city heritage building," Franks said. "It does have a lot of history and a lot of stories. It's always a conversation point."

The golf is worth talking about, too.

The front nine, which was added in the mid-1970s and has more bite than the back, is highlighted by four holes on the banks of the Columbia River.

The challenge after the turn is sticking the pint-sized putting surfaces, a good hint that Revelstoke Golf Club has been around awhile. The strength of this side is the three par 3s, which range from 133 to 177 yards into tricky greens.

But it's not the putting surfaces, pin positions or even course conditions that Franks usually hears about as golfers finish up their rounds. The semi-private setup sits in the shadows of the Monashee and Selkirk mountain ranges, and many out-of-towners are admittedly gobsmacked by the towering peaks that surround them.

"First of all, you hear about the scenery," Franks said. "There's the river, and then you've got the mountains. One guy told me, you can duff a shot and you look up at the sky and go to swear or say something and all you see is the peaks and the beauty and everything else and it's like, 'It's not so bad.' It's just the nature and the scenery that it provides. People just love that element."

Revelstoke Golf Club isn't necessarily a course you would go out of your way to play.

It is, however, a great spot to stop en route to wherever it is you're going.

Revelstoke Golf Club is the only 18-hole track for about an hour in any direction, making it an easy decision if you have golf clubs in your trunk and want to stretch your legs. Thanks to the scenic setting, you'll soon forget the course is located just a couple of minutes from the Trans-Canada Highway.

Relatively easy on both your ego and your wallet, you should be in good spirits when you return to the road.

"This is the kind of the course that a lot of people love to play, and the walkability is a really good sell," Franks said. "People, over the years, have realized that this is a top golf course. When people come play for the first time, it's like, 'Wow, I never expected that.'

Tim Gavrich
Senior Writer
Now Reading
From horsin' around to playing a round, Revelstoke Golf Club is steeped in history
Search Near Me