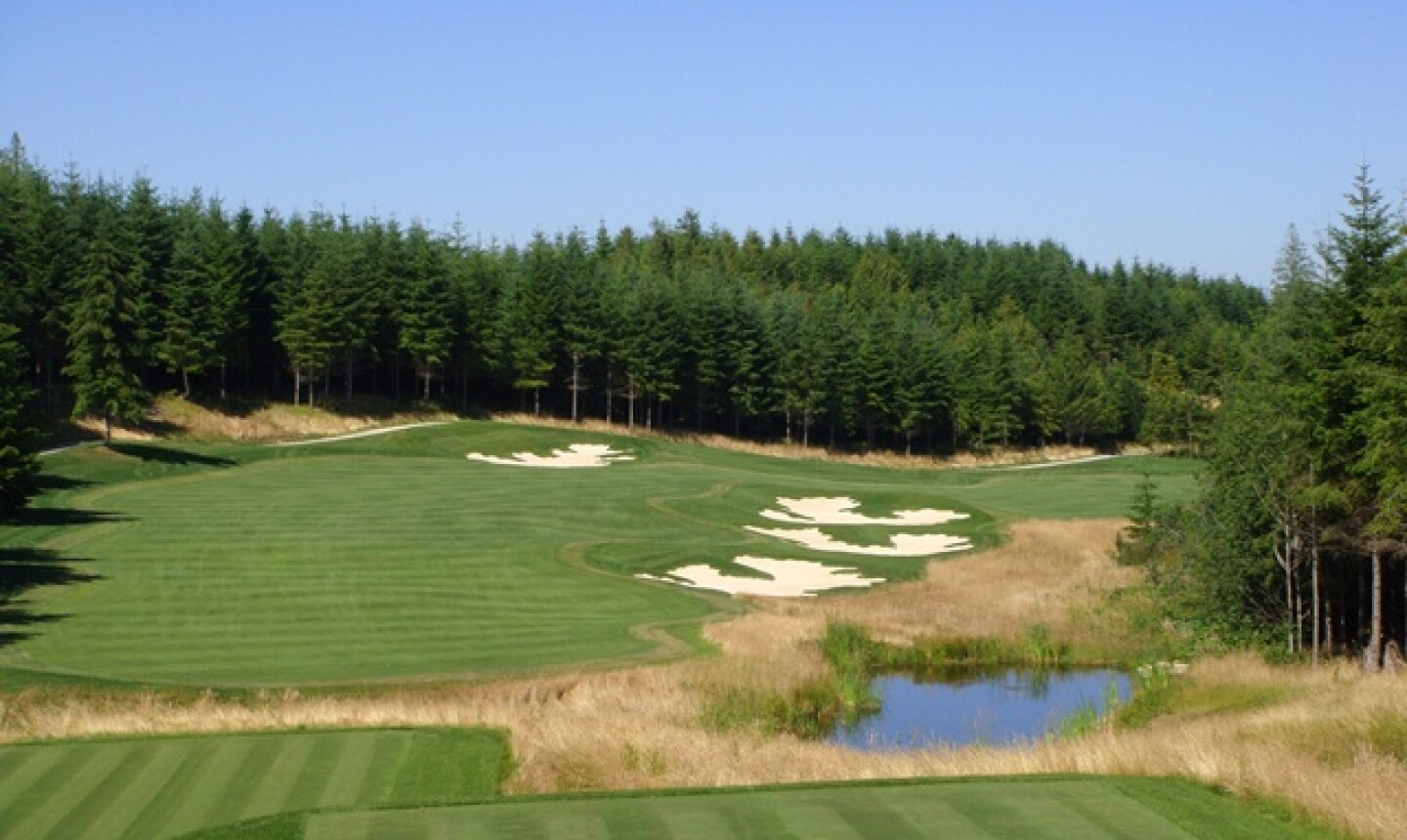 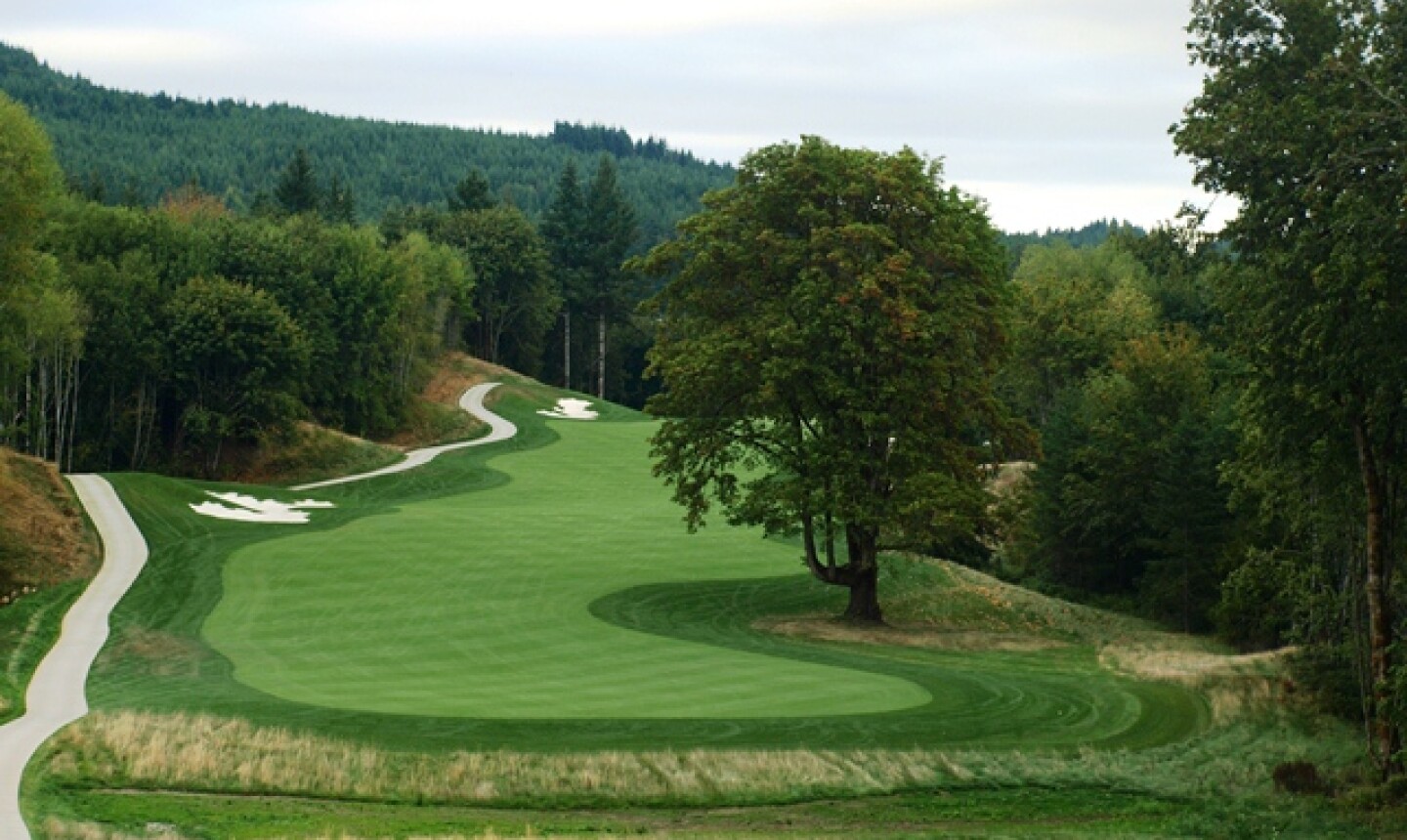 From the first hole, you get a sense for the elevation change at Salish Cliffs Golf Club. Mike Bailey/Golf Advisor 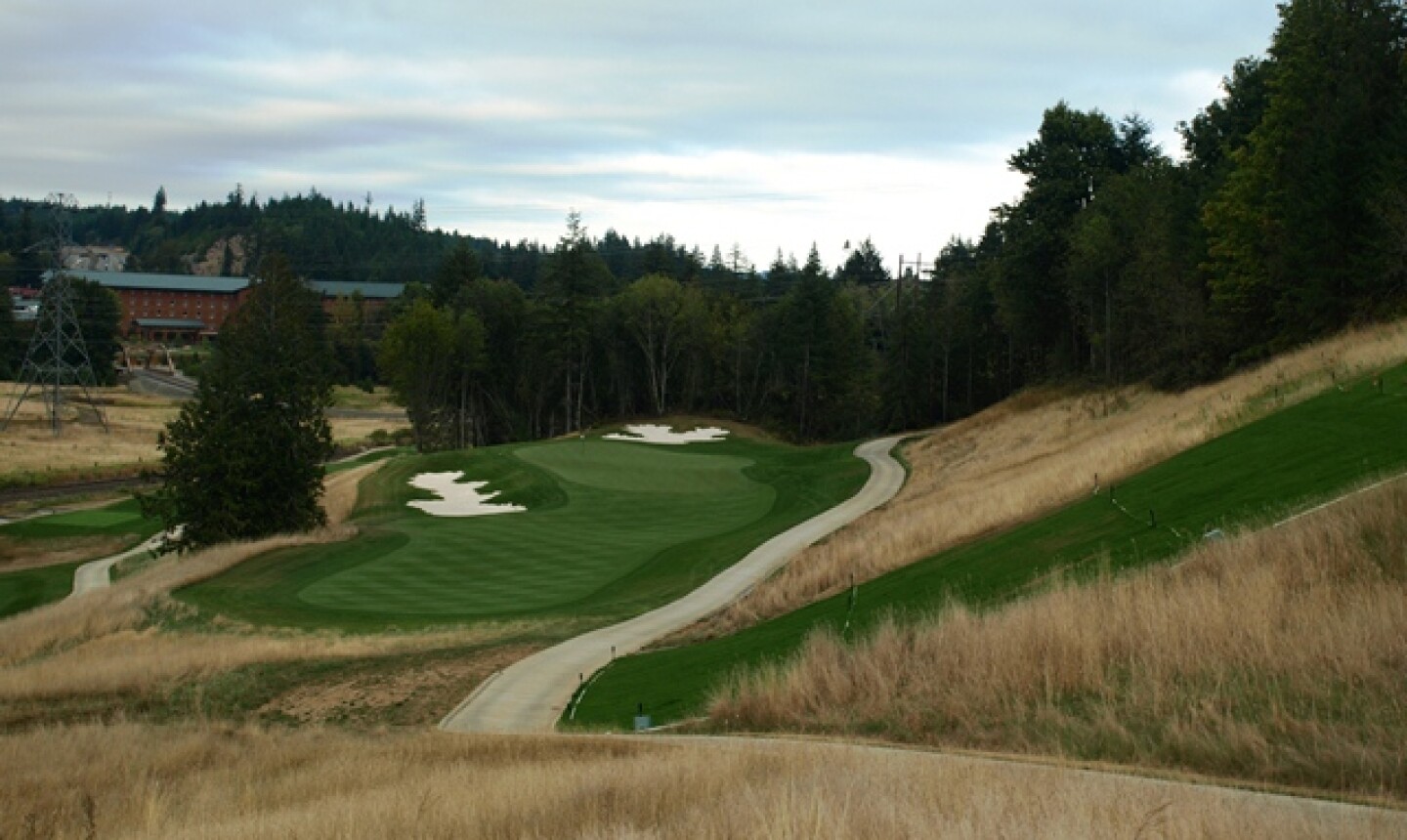 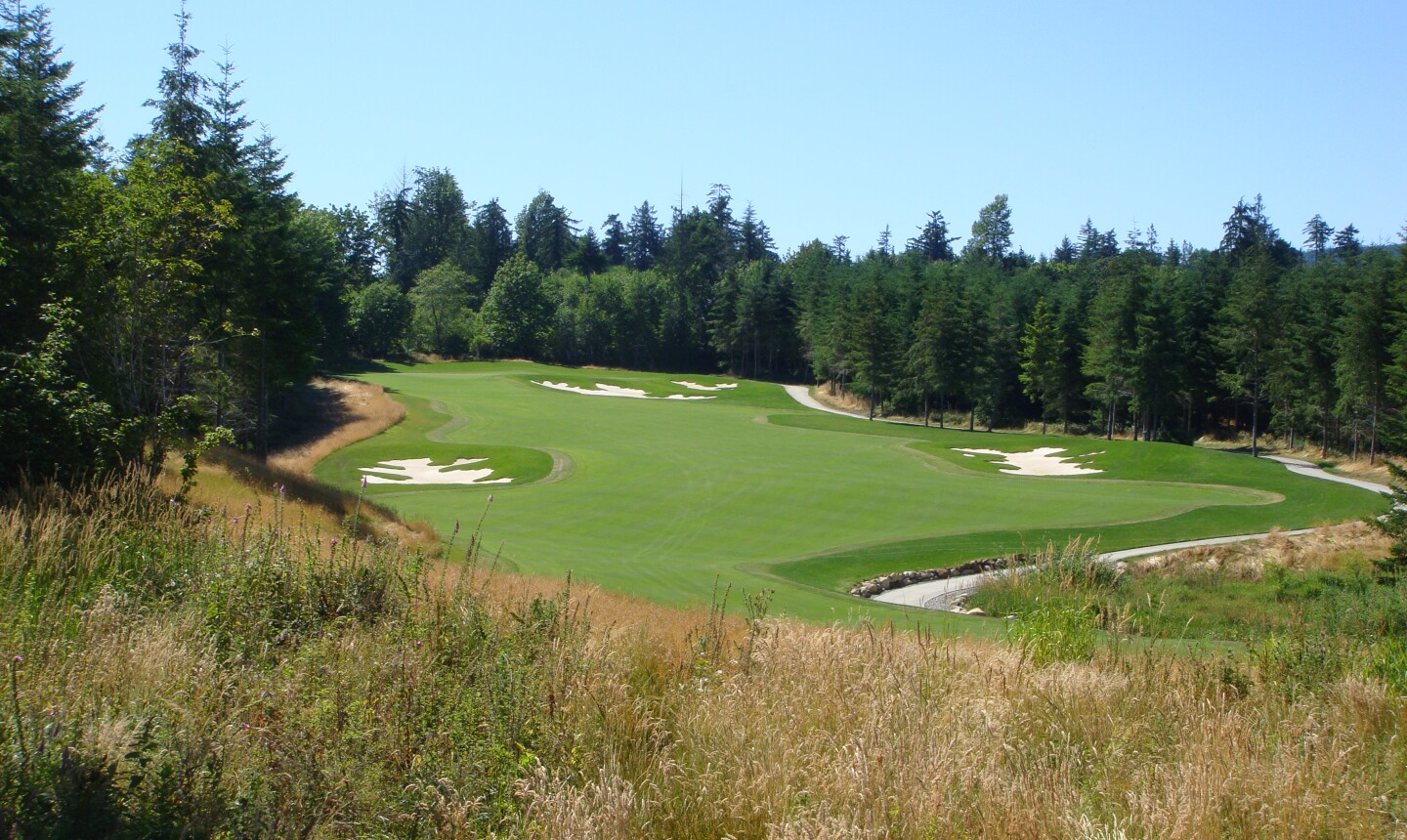 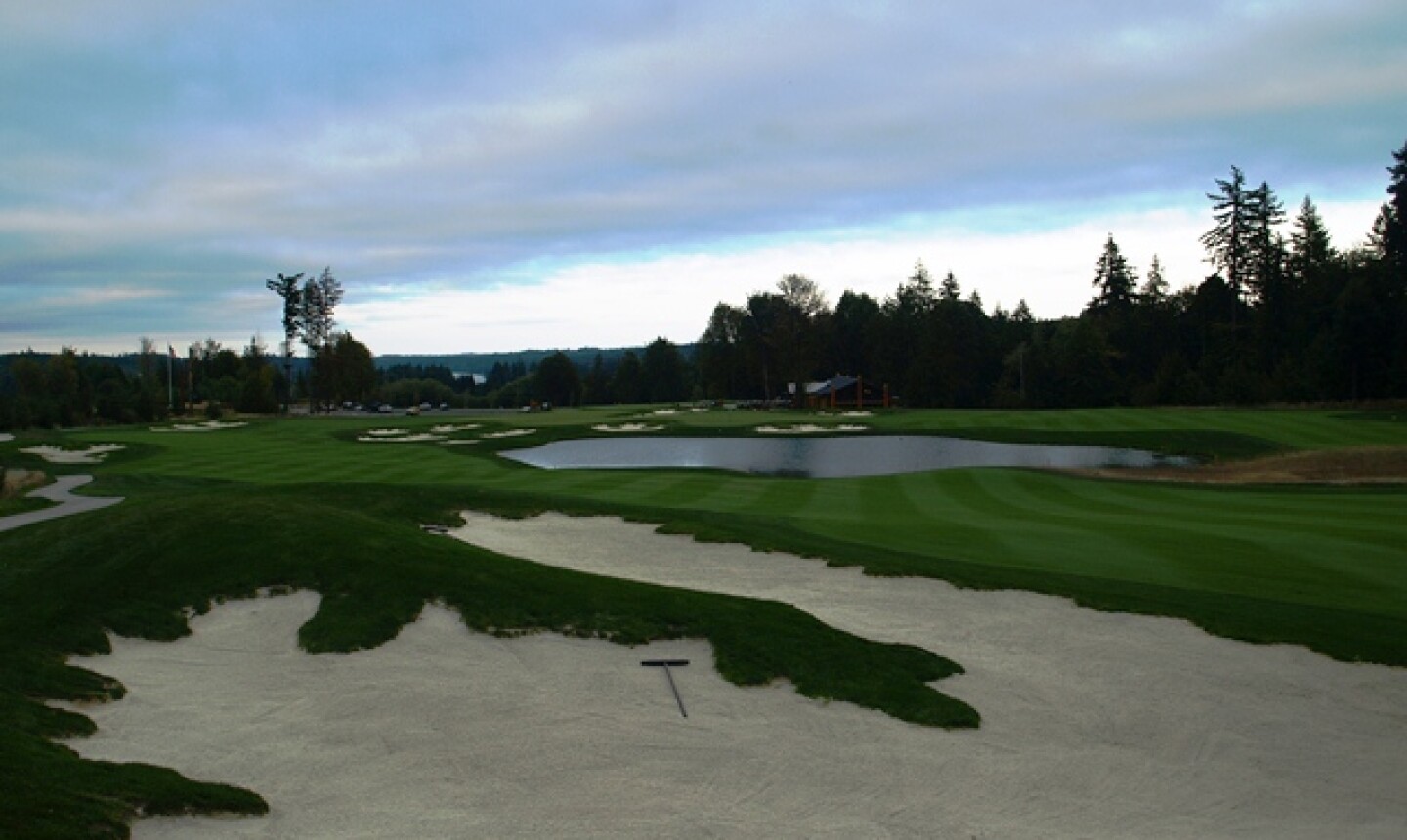 SHELTON, Wash. -- It was media day at the new Salish Cliffs Golf Club at Little Creek Casino Resort, and architect Gene Bates had a smile on his face. He wanted to hear what visitors had to say about his latest creation, a 7,269-yard ride that winds up and down 600 feet of elevation change.

Though he probably wouldn't admit it, he had to know that the early reviews would be positive as they have been for some of his other courses, like Circling Raven, across the state border in Idaho. And although he would be the last to compare Salish Cliffs to Circling Raven, visitors who play the two courses undoubtedly will. They'll find differences, of course, but some important similarities, one being that they're both good tests of golf built on expansive pieces of property while protecting the environment. And they're both in outstanding condition.

As one of just a handful of new golf courses opening this year in the United States, Salish Cliffs will certainly get its accolades. The nearly all-bentgrass course, which looks like it's already been here a decade, has lots of great vistas of the Kamilche Valley, interesting greens complexes and the ragged edge bunkers that are becoming a trademark for Bates.

The golf course is an amenity for the Little Creek Casino Resort, which is owned and operated by the Squaxin Island Tribe. Bates first entered discussions with the tribe some seven years ago, but as they worked to expand other amenities at the resort, golf course plans were put on hold a couple of times.

Eventually, Bates was given the go-ahead, and like Circling Raven, he had his pick of the land on which to build the golf course.

"We had three sites that we looked at," Bates said. "This was the most challenging of the three, but fortunately it was closest to the casino."

The golf course sits on 320 acres, which is about twice the size of most courses. Although it isn't much above sea level overall, it has plenty of elevation change, topping out at around 600 feet at its highest point on the 12th tee.

This elevation change, flow of the land and tall Pacific Northwest pines make for some really interesting angles to the holes. Plus, it's not easy to find a level lie on the course.

Each hole feels very secluded as well. There are no plans to have homes on the golf course, which is one of the side benefits of having a course as an amenity to a casino.

Perhaps the most notable feature at Salish Cliffs is the double green shared by the ninth and 18th holes. The huge green wraps around a lake that comes into play for both holes. The ninth is a 409-yard par 4 that features a carry over water some 230 yards off the tee. The 18th is a risk-reward par 5 that's just 537 yards from the tips. Hit a big drive, and you've got a decision to make, but it's all carry over the left side of the lake to a well protected green on the approach.

There's also a double tee on the eighth and 16th holes. That came about, Bates said, because he wanted to lengthen the eighth to more than 600 yards.

"There's a certain wow factor to having a 600-yard hole," said Bates, adding that today's good players can easily manage that distance as well.

The course also drains fairly well because it was sand capped throughout. Conditioning is so good that the course looks like it's been there for at least a decade, not like it just opened. And construction crews also took great care to protect the environment.

There is nothing not to like about this course. Sure, everyone can nitpick, but conditioning, design, views and even price (considering the championship conditions) are all good. With only a few courses opening each year, Salish Cliffs presented itself spectacularly.

Perhaps the greatest compliment we can give it is that it looks like it belongs with the land, which is exactly what Bates hoped to accomplish. In fact, he said his favorite hole is the 16th, a par 4 that wraps around a small lake where hardly a shovel of dirt was moved. You'll also find a good variety of par 3s, including one that plays nearly 250 yards, four distinctly different par 5s and par 4s that all have their own character.

"I just wanted to fit the golf course on the land and make it look like it's been here for a long time," he said. "I didn't want to move so much dirt in places that made it look artificial. It was really just molding it."