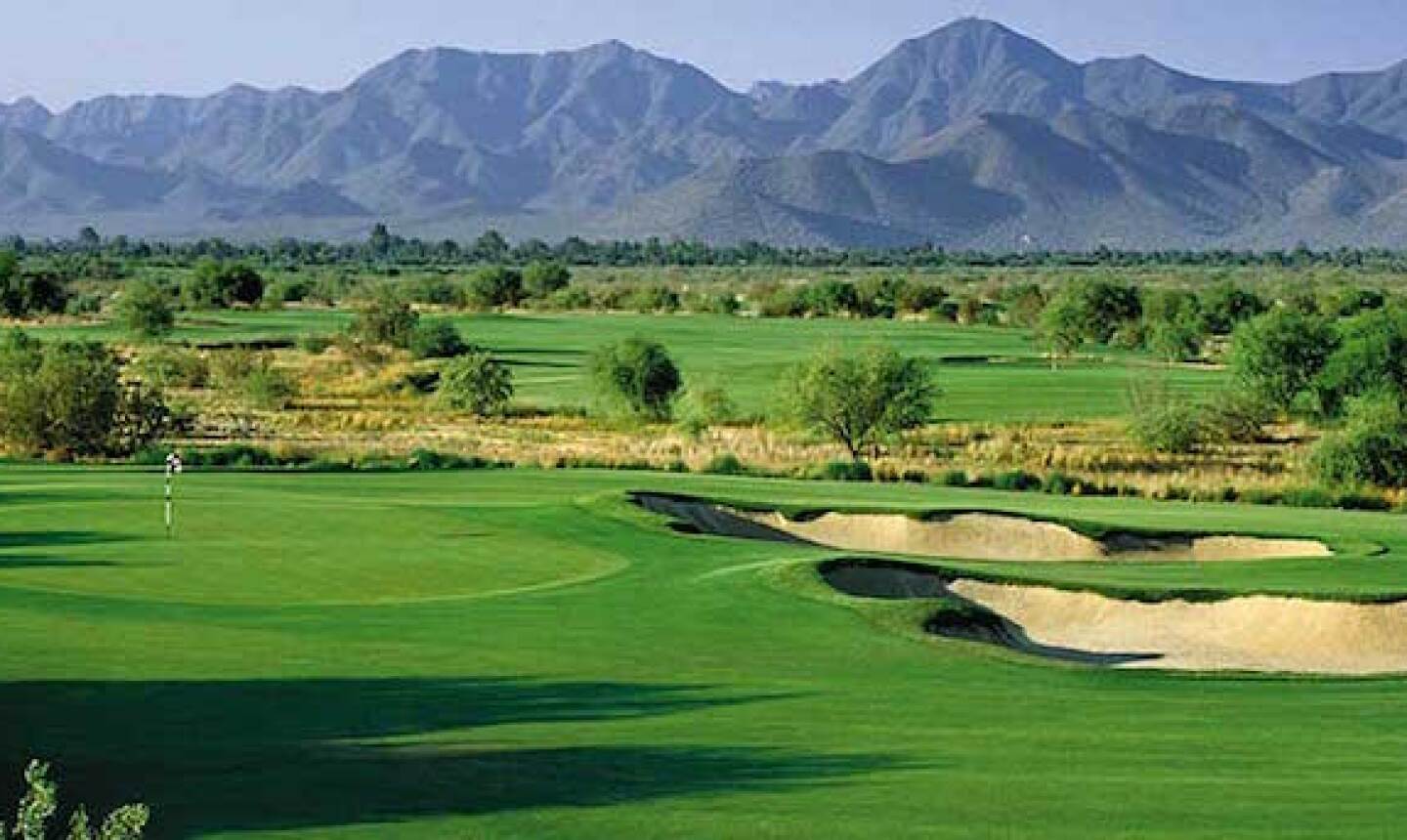 It's human nature to travel somewhere, experience a place, and come away with certain generalizations in mind. Oftentimes, those generalizations have at least a good amount of truth underpinning them.

But in the end, generalizations are there to be broken. So it is with golf courses. The world's major golf destinations tend to have certain stereotypes that their respective golf courses tend to adhere to. But sometimes, the most exciting courses are the ones that break the mold. And when you encounter these courses, they can turn your latest golf vacation from merely enjoyable to utterly memorable.

The golf stereotype: Modern, flat courses, lots of water hazards and ever-present out-of-bounds stakes with houses and condos everywhere
Stereotype-breaking courses: It's well-documented by now, but the most un-Florida spot for golf in Florida is Streamsong, with its Red and Blue (and Black coming next year) layouts. No housing as far as the eye can see (just the distinctive clubhouse and hotel), and wide hole corridors that bob and weave between massive sand dunes left by parent company Mosaic's past mining activities.

Another un-Florida Florida golf spot is Lake Jovita, about 45 minutes northeast of Tampa. It is home to a hole - the par-5 11th on the South Course - that drops 90 feet from tee to green, more than any other hole in the Sunshine State. There are houses on the property, but they do not crowd play on Lake Jovita's two lovely courses (stay tuned for more on this lesser-known spot in the coming weeks). Water comes into play a little bit, but it's not everywhere.

Along similar lines as Lake Jovita is Mission Inn, whose two courses traverse the hills northwest of Orlando. Mission Inn's first course was built almost a century ago, and provides a nice classic look for golfers who note that the vast majority of Florida's public and resort golf is on the newer side.

The golf stereotype: Tight, soft courses whose holes are walled in by massive trees.
Stereotype-breaking courses: Chambers Bay, the first course in Washington State to host the U.S. Open, is the ultimate stereotype-buster, especially relative to claustrophobic, tree-lined Sahalee, the former most famous course in the state before Chambers, by Robert Trent Jones II and Jay Blasi, came along.

About 4 1/2 hours south and east for Chambers Bay is another course that most golfers would never guess is in Washington: Wine Valley, in Walla Walla. This Dan Hixson design resembles something one would expect to see in the Great Plains, rather than the Pacific Northwest, but this part of the state is much drier and more open than the Seattle area.

Another un-Washington layout is David McLay Kidd's Gamble Sands, in the town of Brewster, overlooking the Columbia River. Kidd designed Bandon Dunes' original course, and Gamble Sands is very much in that mode: wide open, firm and fast and a whole lot of fun.

The golf stereotype: Super-expensive courses with housing everywhere and constant forced carries over desert
Stereotype-breaking courses: Talking Stick Resort, which has two courses, is a mold-breaking resort in Scottsdale. Designers Bill Coore and Ben Crenshaw infuse a minimalist, throwback sensibility into their courses, and in the Arizona desert setting that translates to generous fairways, ample short grass around the greens and relatively few of those forced carries. That means you can get around without losing a golf ball, a rare feat in the Southwest.

A bit west of Talking Stick, the Arizona Biltmore's two courses rebel a bit against Arizona golf stereotypes as well, particularly the older Adobe layout. Originally designed by William Bell and opened in 1928, Adobe is a parkland course through and through, with the desert never coming into play. Fairways are pretty wide, but if you stray off them, you're likely to find your recovery prospects very manageable. And at just 6,400 yards from the tips, with a rating and slope of 70.3 and 123, respectively, we would definitely describe this as a "Blue Square" course in a region full of Black Diamonds.

The golf stereotype: Ancient, windswept links or heathland gems with tons of history and pot bunkers
Stereotype-breaking courses: Not that we don't heartily recommend the "stereotypical" great links courses of Ireland, England and Scotland and the amazing heathland layouts south of London, but there are a number of other worthy layouts that defy classification as either of these types. Our favorites include The Grove, a Kyle Phillips design on a gracious country estate north of London, and Rowallan Castle, a Colin Montgomerie layout located about midway between Glasgow and Troon. Then there are the modern Ryder Cup venues of The Belfry, The K Club, Celtic Manor and Gleneagles, all of which are more modern American-style resort courses than anything else.

What courses that you've seen on your travels have upended the expectations you had going in? Share your thoughts and read what others are saying below!

Try playing at Isles of Scilly Golf Club on St Marys, IoS, U.K. Scenically stunning views over the other islands. Watch out for the signature 4th hole.

I agree with Mike D. World Woods is one of my favorite tracks in Florida. You cannot go wrong by playing Pine Barrens and Rolling Oaks. While Rolling Oaks may not break the mold the Pine Barrens is not your everyday track. There probably is only about 20 waste area bunkers on the course, but they average about 3 acres each. I love it. I found it on www [dot] mygolfvacation [dot] com The one guy used to work there and informed me of it.

The course next to The Grove in Watford England, West Herts, was founded in 1890. Suggest you look at the course via their web site.

Just played Wine Valley in Walla Walla last month. Great links style course. Next time this Kansan is in Washington will definitely drive out of my way to re-vist. Great vineyards and wineries just down the road.

Being from the west, try the Old Works Golf Course in Anaconda, Mt. This is a Jack Nicklaus design with bent grass tee's boxes and fairways along with the black sand (Buy product of the old mine) in all the traps, lush greens with the black sand, Gorgeous!

I've played both Streamsong and the Talking Stick courses (and about 850 others). There are many courses in the Scottsdale area that are also "unconventional" if Talking Stick is the test - We-Ko-Pa, Ak-Chin, Quintero, Verde River to name a few and all are better tracks than Talking Stick (no houses, wide fairways, etc.)
Worldwoods is certainly not conventional Florida golf. The Pine Barron's course is equal to those at Streamsong and Rolling Oaks is a good track as well.

Check out the Cliffs at Mountain Park, near Travelers Rest, South Carolina; a Gary Player designed "links course in the mountains

Big Sky Golf Course located in Pemberton BC, Canada never fails to please. A beautiful, walkable track in a splendid setting at the base of rugged Mt Currie.

Well, say what you will about Donald Trump, his course near Aberdeen is very nice! (Although it is a Scottish course, with the heather, gorse, and deep pot bunkers.)

By Jason Scott Deegan
Read More
Load More
Popular
Padraig Harrington's thoughtful, unassuming tournament dispatches are a Cool Golf Thing
A hole-by-hole tour of Torrey Pines South, the 2021 U.S. Open host
Strokes Gained isn't just a stat for the pros anymore. Here's why and how you can use it in your game
Golf travel's greatest debates
Editorial Staff

Kira K. Dixon
Lifestyle Correspondent
Now Reading
Golf Courses That Totally "Break the Mold
New Cookie Policy
WE AND OUR PARTNERS USE COOKIES ON THIS SITE TO IMPROVE OUR SERVICE, PERFORM ANALYTICS, PERSONALIZE ADVERTISING, MEASURE ADVERTISING PERFORMANCE, AND REMEMBER WEBSITE PREFERENCES. BY USING THE SITE, YOU CONSENT TO THESE COOKIES. FOR MORE INFORMATION ON COOKIES INCLUDING HOW TO MANAGE YOUR CONSENT VISIT OUR COOKIE POLICY.
CONTINUE
Search Near Me