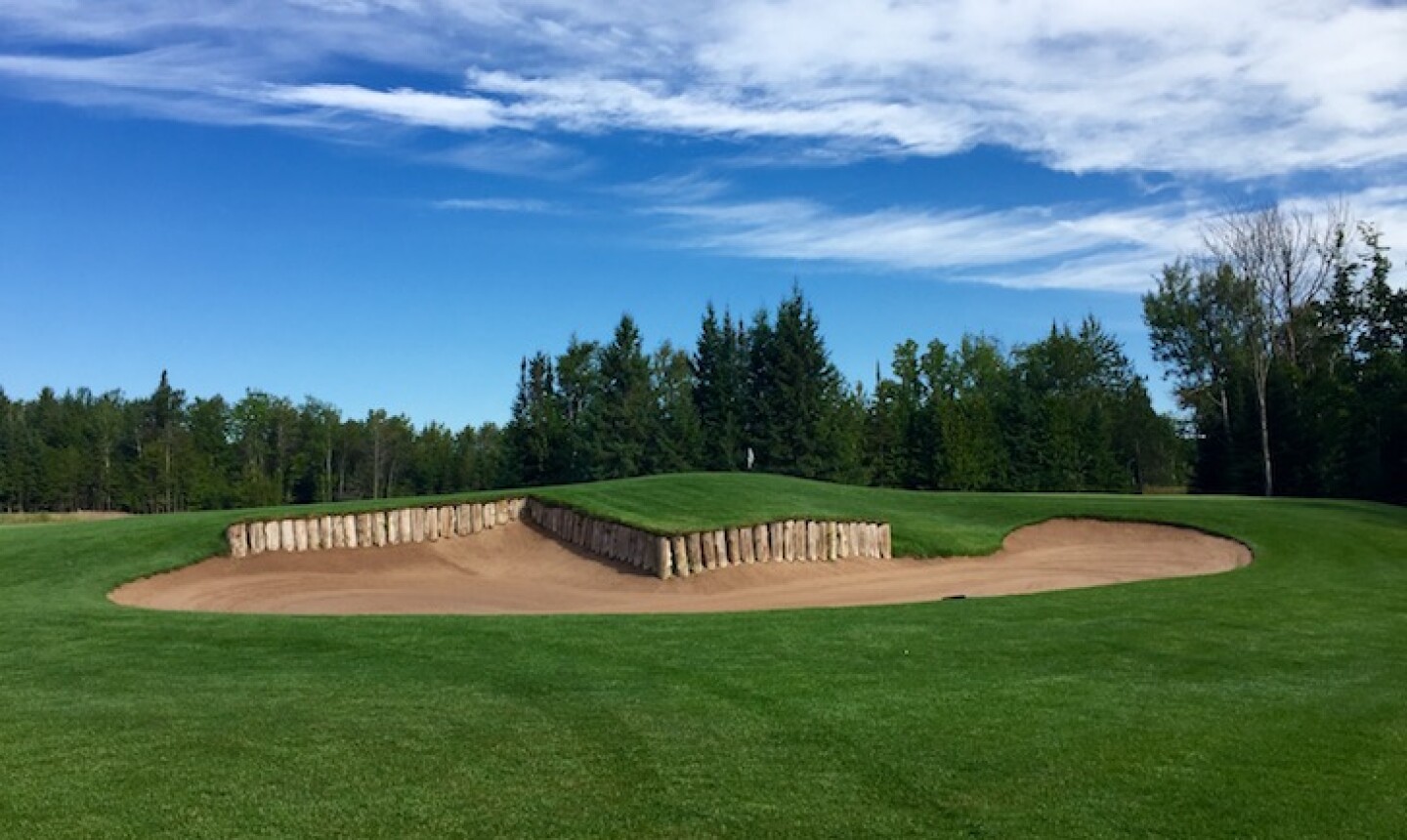 Z-shaped wall of pilons on the edge of a greenside bunker on the eighth hole (above), meant as a tribute to Zoie Brozowski, a longtime friend of the Hannahville Potawatomi Indian Community

If you've played golf at a few casino resorts, or if you've merely been following their development over time, you've probably noticed a common thread.

They're located, in many cases, on Native American tribal land.

Why is this? Not to bore you, but in brief: the passage of the Indian Gaming Regulatory Act of 1988 enabled tribes to aggressively develop gaming places, from humble bingo halls to massive casino resorts and everything in between, on their own federally-granted land.

Casinos are big tribal business, with their associated gambling operations generating close to $30 billion in revenue each year.

That legislation has been a boon for traveling golfers, as many tribes in the casino business have realized that golfers who gamble tend to spend a bit of money between the tables and the courses and everywhere in between.

Bottom line: it's good to be in the golf business as well as the casino business.

And just as many of these Indian-owned casinos showcase a good amount of tribal-related décor, that aesthetic tends to extend to their golf courses. For example...

An easy way to brand golf operations as tribal-owned is to have the name of the facility point to the heritage and history of the resort's overseers. As you can see on our Best Golf and Casino Resorts List, tribes have taken different approaches to naming, from the overt to the subtle.

At the obvious end of the spectrum, there are a number of courses and facilities with names rendered in a native language, such as:

At the more subtle end of the spectrum are facilities like Sweetgrass Golf Club (and its soon-to-open companion, Sage Run), Dancing Rabbit Golf Club and Whirlwind Golf Club, which nod toward animals or concepts of significance to the communities that own them.

Other facilities split the difference. Take for example the Oneida-owned Turning Stone Resort & Casino, which lends native-derived words "Shenandoah," "Kaluhyat" (which means "the other side of the sky" in Oneida) and "Atunyote" ("eagle") to its three main golf courses.

Beyond the naming of golf courses is the naming of individual holes, which is another trend among Native American-owned casino courses. Hole names tend to highlight animal and plant life that are native to the area where the golf course is located, of particular significance to the tribe, or both. They may even help to cleverly describe the hole itself.

Take the fifth hole at Yocha Dehe Golf Club outside Sacramento, California: it's a medium-length par four where the tee shot needs to carry a pond. The name of the hole? "Frog's House."

Beyond names, there are other distinguishing features that are indelible to casino golf courses. When we visited Sweetgrass Golf Club at Island Resort & Casino in Michigan's Upper Peninsula this summer, we noted a couple unique touches.

The first was a Z-shaped wall of pilons on the edge of a greenside bunker on the eighth hole (above), meant as a tribute to Zoie Brozowski, a longtime friend of the Hannahville Potawatomi Indian Community, who own the resort. The second was a carved wooden eagle (below, lower left of photo) perched on a pedestal behind the 13th green, a symbol of great cultural significance to the tribe.

Native-owned golf courses use interesting names and other "little things"  to endear themselves to visitors help to establish a tangible sense of place that doesn't always prevail at other public-accessible golf courses. It makes sense: it adds to the sense of escape that a lot of special golf experiences offer.

Some other noteworthy features at Native American-owned courses:

To be sure, serious golfers would not want to be overwhelmed by these symbols, but that's never problematic, as these golf courses' owners know that the best way to market themselves is by providing a quality golf experience first and foremost.

What are some of your favorite features of Native American-owned golf courses? Tell us about them in the comments below!

Cedars at Dungeness in Sequim, WA is a beautiful course on the coast with views of the Olympic Mts and a big bunker with red sand in the shape of a Dungeness

Dancing Rabbit is awesome. It has 2 great courses. One u can play anytime and the other you do have to stay somewhere on the property

WeKoPa is a gem (well, 2 gems - both courses are spectacular).

Dancing rabbit in Mississippi is outstanding. Can play when you stay at the casino hotel.

Kira K. Dixon
Lifestyle Correspondent
Now Reading
Best golf and casino resorts: The game's tribal influences
New Cookie Policy
WE AND OUR PARTNERS USE COOKIES ON THIS SITE TO IMPROVE OUR SERVICE, PERFORM ANALYTICS, PERSONALIZE ADVERTISING, MEASURE ADVERTISING PERFORMANCE, AND REMEMBER WEBSITE PREFERENCES. BY USING THE SITE, YOU CONSENT TO THESE COOKIES. FOR MORE INFORMATION ON COOKIES INCLUDING HOW TO MANAGE YOUR CONSENT VISIT OUR COOKIE POLICY.
CONTINUE
Search Near Me