The GolfChannel.com staff shares highlights from their summer trip to Ireland's northwest coast.

Don’t be afraid to go northwest and play golf in Ireland, you won’t regret it. That’s a common refrain that I’d heard each of the previous five times I’d visited the Emerald Isle.

So, I elicited the help of Rex Hoggard, Ryan Lavner and Mercer Baggs. Our fearsome foursome visited five courses in four days before heading onto the 148th Open at Royal Portrush.

Turns out, the area is as terrific as it’s billed.

Our itinerary was put together by Maura Nolan, founder and president of Irish Links Tours and Travel, which specializes in organizing travel experiences in Ireland, Scotland, England, Wales, Spain, Italy, France and South Africa. She endorsed Northwest Ireland's offerings as such:

“These remote clubs offer more accessible tee times, are very welcoming and the quality of golf and tremendous value is unmatched,” Nolan said. “When you combine the golf experience with the magnificent scenery of towering mountains and dramatic cliffs; the small fishing villages, the local pubs, the freshest of seafood, the legendary castles and the friendly locals, you have a most memorable golf tour.”

Here’s some of our most memorable experiences from the whirlwind trip:

No matter your age, or where you’re arriving from, it’s always challenging to play a course straight off the plane. Unpacking your travel bag, changing in the clubhouse, shaking off the jetlag – it rarely adds up to an enjoyable experience.

But here’s a solution: After flying into Shannon, pile into the car and drive 15 minutes to Dromoland Castle, a five-star hotel that also features a parkland-style (and affordable!) course that gets your trip started off right.

Rather than try to find your swing on the course after a redeye – like we did at Ballybunion – take a few swipes on the covered range before teeing off on the lush, 6,800-yard track that features plenty of challenge and intrigue. We chose to stay on-site, and the hotel mixes 16th-century grandeur with all of the modern amenities you’d expect in a luxury hotel. For dinner we lounged in The Gallery, where we tipped back a few Guinness and enjoyed everything from the Irish stew to fish and chips. (Pro tip: Highest recommendation on the stew.)

One of the benefits of starting at Dromoland is that it’s an ideal launching point for the rest of your Irish golf vacation. From there it’s only about 90 minutes to Ballybunion, which was one of the highlights of our trip. We played the Old Course (est. 1893), but if given the opportunity we’d love to squeeze in a 36-hole day by including the newer Cashen Course, as well.

Guided around the classic links with a father-son caddie duo, the Old Course featured a benign opening stretch before a distinct shift on the par-4 sixth hole. The demanding approach shot previewed what we’d see the rest of the round, with elevation changes, more severe runoffs and spectacular vistas. Listed at just less than 6,400 yards from the member tees, the course played plenty tough, especially with a pair of back-nine par 3s that were 200-plus yards. Clever design on the last two holes leaves a satisfying taste as you undoubtedly retire to the clubhouse bar, ready for the next leg of your journey.

At first it seemed like Siri was caught in some sort of directional loop as she led us to another destination on our itinerary. “Take a left on Wild Atlantic Way and your destination is on the right,” Siri announced as we pulled into Enniscrone Golf Club.

Enniscrone was the third course in three days located off the Wild Atlantic Way, which is less a continuous byway than it is a collection of coastal roads that connects some of Ireland’s best links layouts.

The meandering road stretches nearly 1,600 miles from County Cork in the south to Donegal in the north, but it was the northwestern loop and the promise of unexplored golf that drew us off the beaten path and onto Wild Atlantic Way.

This particular portion of Wild Atlantic Way winds haphazardly from the iconic Old Course at Ballybunion Golf Club to the rugged charm of Carne Golf Links in North Mayo. The Dunes Course at Enniscrone is the understated star of any golf tour of Ireland’s northwest coast followed by County Sligo’s Rosses Point and finally Ballyliffin Golf Club, which is billed as Ireland’s most northerly course and is located about 60 miles from Royal Portrush.

Like the better-known Ring of Kerry in the south and even the collection of back roads that connect many of Scotland’s best links courses in Fife, the northwest stretch of the Wild Atlantic Way is sometimes more adventurous than the golf and, like those more renowned links road trips, it’s just as rewarding. 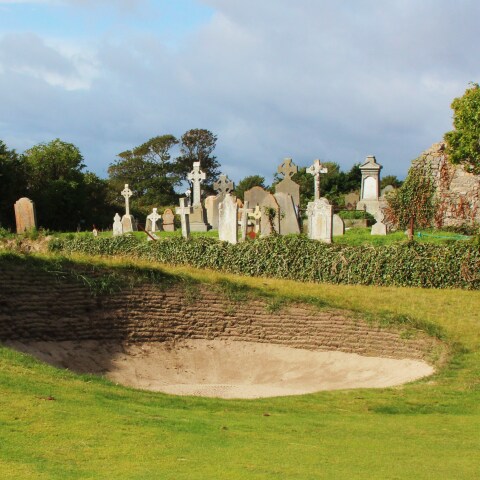 Enniscrone? Or was it Inniscrone? Literally depending on where you stood in and around County Sligo, the course name was written with an E or an I. However you spell it – going to stick with the E – it was my favorite of the five courses we played on our Ireland golf trip.

Enniscrone was the first on a two-course Sunday. We were greeted – and later had lunch with – the friendly staff and assigned a club member to walk along with us. That helped as we had obviously never seen the course, and also because he carried Snickers and Mars bars in his caddie bib.

The course itself was sightly, with ocean views and huge mounds. It was also a relatively easy walk, which is always appreciated when playing 36 holes in a day. Primarily, though, I recall it was fair and enjoyable. Maybe I remember it that way because I played well. Or maybe I played well because it was that way. Everyone in our foursome, however, gave it a five-star review, so it must have been more than just my good play. Speaking of which …

Needing to play the final two holes in even par to break 80, I hit a 6-iron to 2 feet on the par-3 17th for birdie and then successfully played for bogey on the final hole. Proud of my accomplishment, I even purchased a logoed golf ball from the pro shop to commemorate the time I shot 7-over-par 79 at Enniscrone. 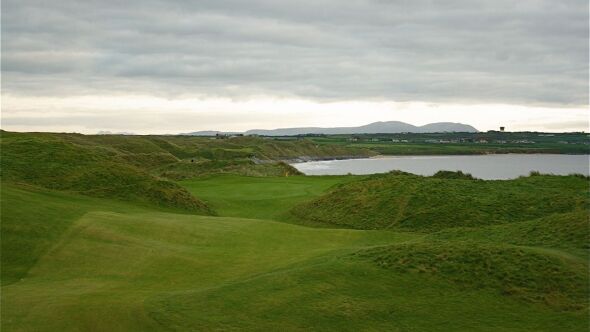 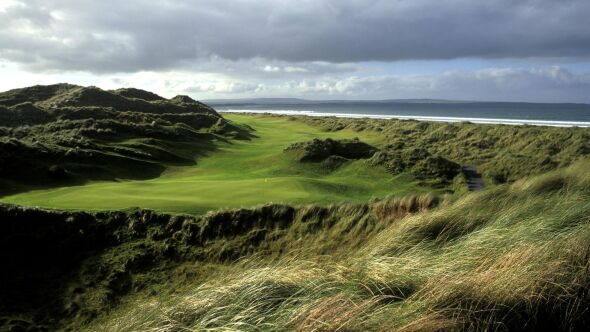 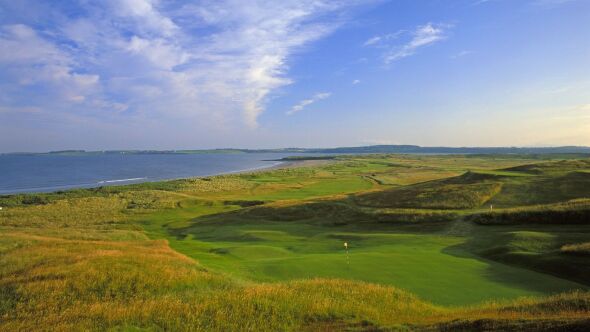 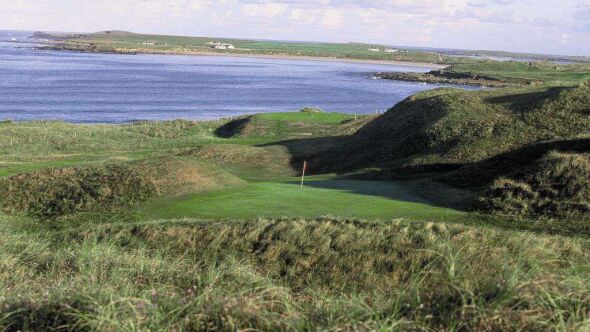 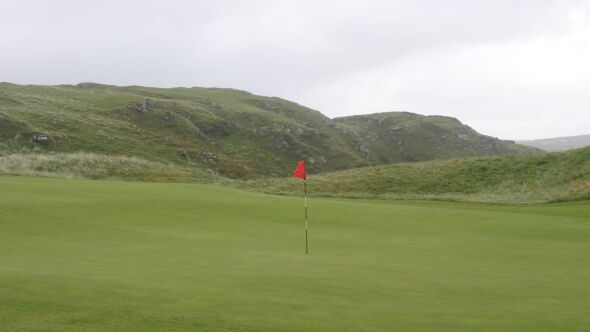 I first played the Northwest Ireland courses in 1994. Our last day was both courses at Ballyliffin. Between the two courses I thought the area was magical. For Christmas that year I asked my wife to get me a lifetime membership. Go every year since.

Several years ago, 4 of us old boys did the northern thing - Ballyliffin, Castlerock and down the east coast Royal Belfast, Ardglass (our favorite), Bettystown and Laytown, Seapoint , Portmarnock Links and County Louth. This is the "poor mans" tour, with reasonable green fees (we were guests at Royal Belfast) and lots of links golf. You can golf in Ireland at good courses for a reasonable green fee if you stay off the 'biggies'. Well worth the trip!

Earlier this summer, last half of May, I enjoyed a similar outstanding trip arranged by Matt Adams of GC and Swing Ireland of the southwest Ireland including Ballybunion. Your article reminded me of this fantastic time which in addition to the great golf, was highlighted by the most hospitable people that golfers could visit. I'll definitely go back and look forward to visiting "the Northwest" loop.