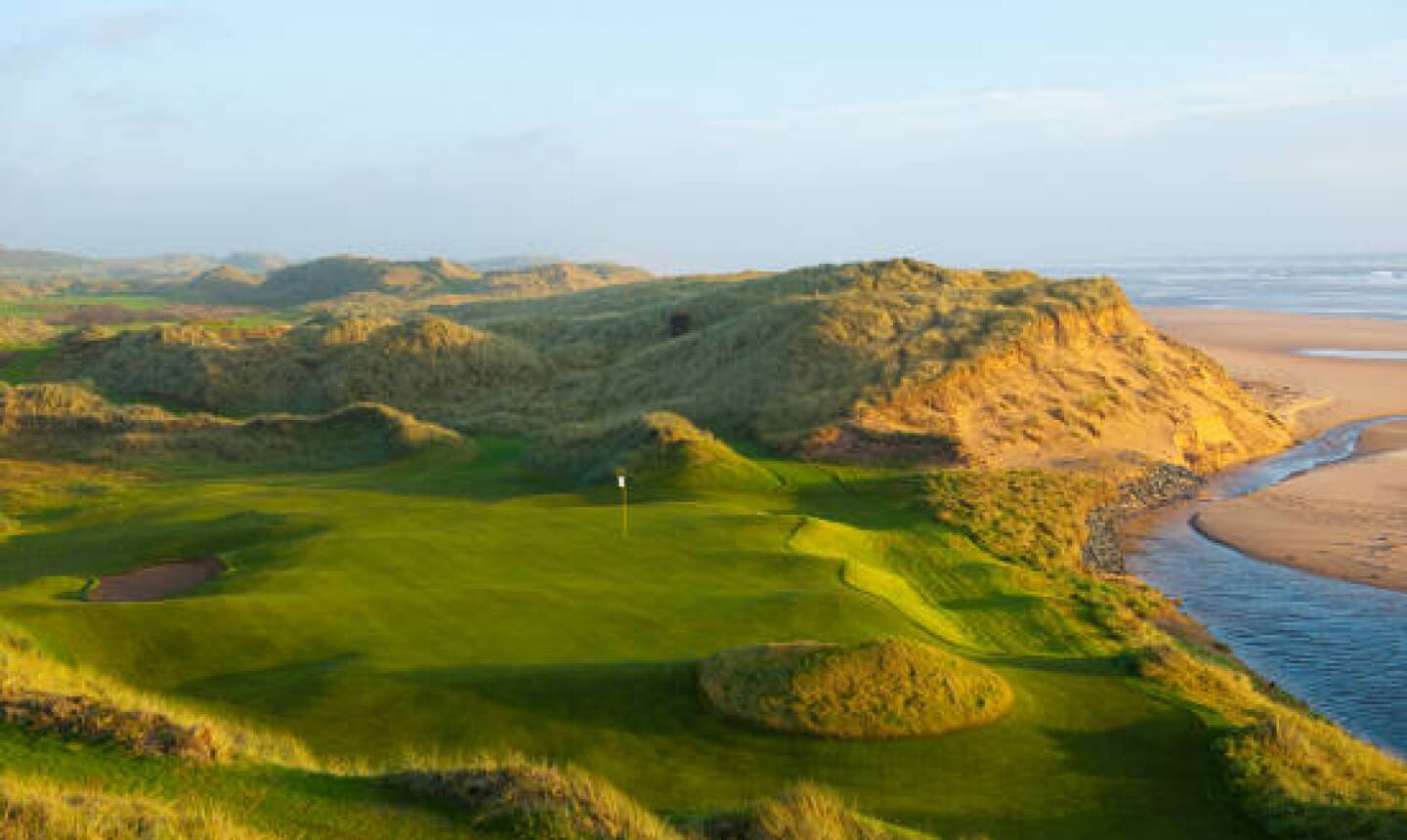 Trump Scotland is now officially open for play and will likely ascend quickly in the world rankings.

After years of Donald Trump telling us he built, "the world's greatest golf course," we can now judge for ourselves.

Last week, one of my operatives attended the official opening of -- and played -- Trump International Golf Links, Scotland (or "Trump Scotland" as most people are calling it) in Aberdeen, which is a two-hour drive north of St. Andrews.

My guy says the "masterful" design by architect Martin Hawtree is "awe-inspiring" and, "an absolute must-play."

British PGA chief executive Sandy Jones said: "There is no doubt in my mind it will certainly be in the top three in the world, but I don't know what's going to be number two and number three."

Another extremely-well-traveled golfer I know said, "Cruden Bay is a 10. Royal Aberdeen is a 9.5. Trump Scotland is at least a 12...You are going to be blown away."

Impressive, for sure. But why all the praise?

For one thing, Trump Scotland set on a phenomenal piece of property alongside the North Sea and features what is probably the largest dune system in the world.

And, in addition to being visually stunning, these enormous dunes add excitement and intrigue to the game.

For example, from many tees it looks like you're forced to hit knee-knocking, "thread the needle" shots to reach safe landing zones, but these areas are actually quite generous (the rough is another story).

Likewise, the dunes provide a false sense of insulation from the wind. Buffered at address, the wind can wreak havoc once the ball rises above the dunes' peaks, making club selection a constant debate.

So, no question this course is a good one. Probably a great one.

To answer that, we need to know what makes a course the best in the world.

Eighteen strong tests of golf would seem like a prerequisite, but to what extent do things like aesthetics and "history" matter?

Must it be so challenging that even the world's best players have trouble breaking par?

How about the ability of a less-skilled player to make their way around? Is recoverability important?

Must a good shot always be rewarded or is some level of randomness acceptable?

How do you think the world's greatest golf course should be defined, and which course do you think best defines it?

Craig Better
Craig Better is one of the founding editors of Golf Vacation Insider. In addition to traveling to 15 foreign countries, he has twice traveled across America to play golf courses in all 50 United States. Prior to joining Golf Vacation Insider, Craig was a freelance writer who contributed to GOLF Magazine, Travel + Leisure Golf, Maxim Magazine, USAToday.com, and co-authored Zagat Survey’s book, America’s Top Golf Courses.
15 Comments

The pictures look great but only Trump will tell you it is the world's greatest because all he cares about is to lay claim to that title. In the future he will say it is the greatest but like everything else, there will have to be a true vote that he will say is rigged if it is not him. My guess is the property in the future will probably go bankrupt after the loans he took out to build it come due and he is not able to pay them.
There are so many truly spectacular golf courses in the world that is really unfair almost to rank them. I like the idea of saying for X reasons, the following courses fall into the top 25, 50 or 100 in the world and leave it at that. I was fortunate to visit Scotland and played Carnoustie, Royal Troon, Turnberry, the Old Course and the Jubilee at St Andrews. Which is better?? What criteria? The best part is the rich history associated with each and knowing that I was fortunate to be able to walk those fairways and enjoy the experience. I shot even par on the Old Course on the final day of my trip, the first and only time I played her. I can still remember almost every shot and it has been 10 years.
Golf truly is the greatest game a person can play. I have played around the United States and in some other countries and on some of the "greatest" courses but to say some are the best?? The best courses to me are the ones that are memorable and I walk off the course and say wow.

Well I just played The Donald's new course and while it is a stunning and stern test of golf, I don't think it will ever reach the lofty position of #1 or "best course" in the world, not by a long shot. It is too penal, some holes are unplayable, and when the wind blows forget it. I have played the best in the world, and one of the most important criteria for being considered the very best is the desire to want to play the course everyday. You will certainly want to play this course but once is probably enough. There are so many better courses in Scotland, just head two hours north to Castle Stuart, now thats a great golf course.

Have look at a recent course opened in Nova Scotia. A true Links 18 holes with a view of the sea and all on the land between the town of Inverness and the sea. Many predict it to be the best in Canada some feel it can be a world contender. Cabot Links will surprise a lot of pundits. There has been an influx of writers from a variety of American Golf magazine predicting great future for this stupendous new course.

My two cents: greatness can never be separated from history. In the case of Trump Scotland, it only means: "give the course some time, let golfers play it and weep. Or simply feeling goosebumps." Also, I do believe there should be 2 different classments: links golf and parkland golf. Greetings from Rome.

Looks pretty exciting architecturally and visually, but who can say without some widespread play. Also--lets have some of the world's best GOLFERS play there and say what is or isn't the world's best course!

Rehajm's comments are superb. Have had the chance to play countless great courses. Personally I find Royal Dornoch over rated. There are several holes that just need to be nuked. The pictures of Trump Scotland seem to present turf that is exceptional and terrain that is varied. Changes of elevation and dunes and fescue are typically present at great courses. Not 18 challenging holes but 18 memorable holes. I am very much looking forward to playing Trump Scotland.

Several phrases from the write-up above... "awe-inspiring"... "phenominal piece of property"... "visually stunning"... "enormous dunes"... "thread the needle tee shots to generous landing zones"... all brought Mike Stranz' Tobacco Road immediately to mind. A piece of target genius that not only maxes use of the unique former sand quarry terrain, it also takes the theme concept to pervasive new heights by marrying the terrain, the rustic whimsical course design, and the peripheral infrastructure/accoutrements in perfect visual harmony. Tobacco Road has been named a Top 10 Toughest U.S. Public, and tends to illicit strong reactions one way or the other. I wonder if Trump's IGL will end up with a similar rep... loved and revered by adventurers, despised and dismissed by traditionalists?

It certainly looks like a visually stunning course in a beautiful setting. I question the playability though. I'm a founding member of Doonbeg and I remember Doonbeg looking very similar in the early days -- lots and lots of penal marram grass off the fairways just waiting to gobble up wayward golf balls, never to be seen again. Over time, some of these areas were mowed back making the course much more playable in the strong winds that accompany a seaside links. I'm sure this will happen at Trump Scotland as well -- at least it should.

His most recent pile of money sits near Cruden Bay, Royal Aberdeen, and St. Andrews. These courses are all fine tracks and have a history to go with them. The massive dunes at Cruden Bay and Royal Aberdeen are equal to any on the Donald's layout. The play and the views from atop the dunes or down in the valleys are spectacular. How can anyone say that the Donald's latest spending spree is one of the world's top courses?

Calling a course the "world's best" before it has a chance to prove itself among a range of player skills is tantamount to subliminal marketing. Let's wait until the place has at LEAST a year or two under it's belt.