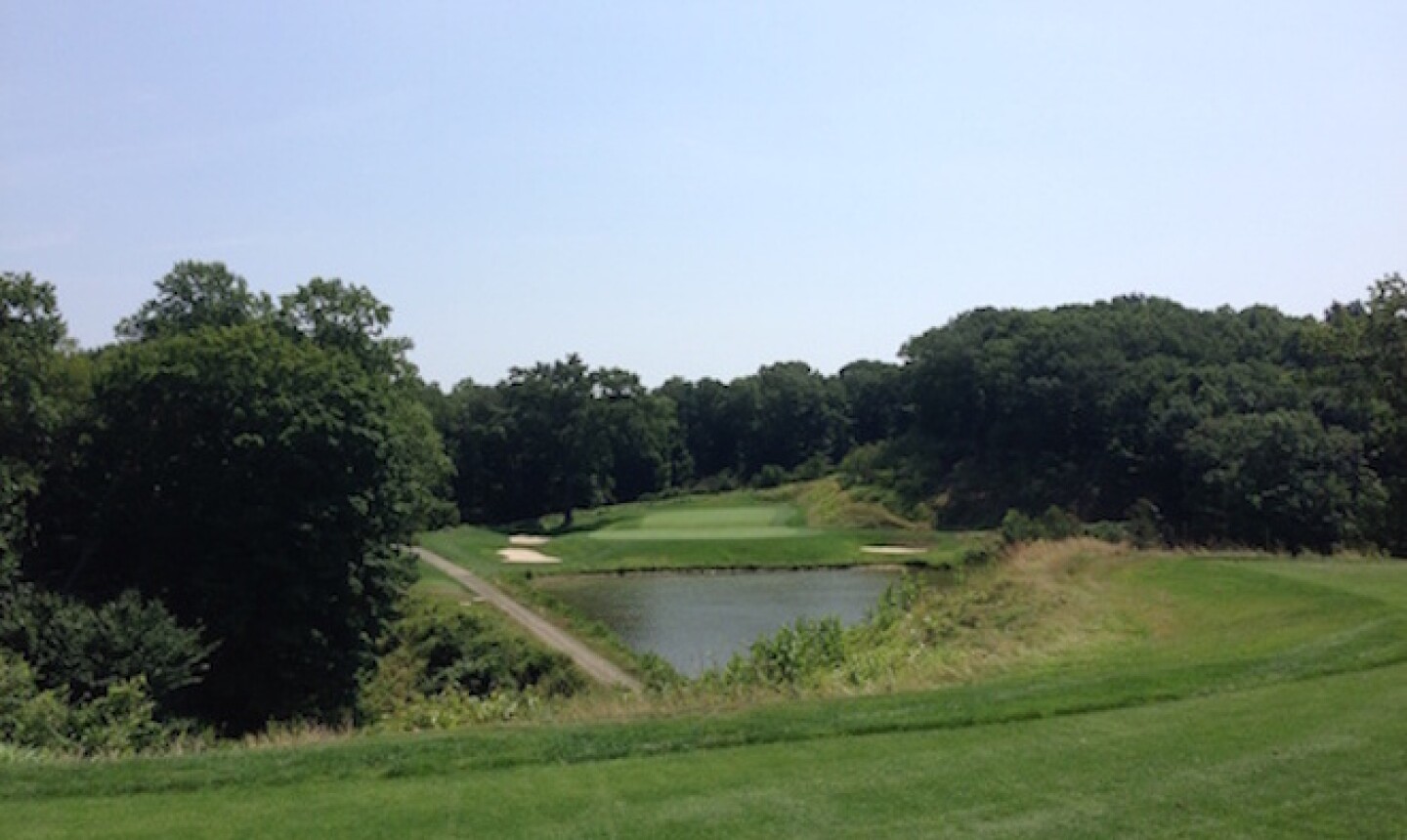 Are you ready for "March Madness"?

If so, we've got the perfect golf travel tie-in for you.

Outside of golf, one of the best parts of the sports year is college basketball's NCAA Championship.

Out of the 68 colleges and universities in this year's field, 22 have on-campus golf courses. Not all of them are worth your time, though. Here are the eight college golf courses you need to have on your radar, with advice on other nearby courses to combine them with on a trip.

***Yale University - The Course at Yale

Okay, so Yale failed to make the NCAA Tournament this year, losing a rare Ivy League playoff to the golf course-less Harvard on Saturday. But no list of great college courses is complete without Yale's, the best in the country. Built in 1926 at the then-exhorbitant sum of $400,000 and designed by C.B. Macdonald, Yale has everything you could want in a golf course: one-of-a-kind holes, huge, wild greens, a rustic atmosphere, and a gnome carved from a tree stump on the side of the 14th hole. Access by non-Yale affiliates can be tricky during the summer; a courteous letter from the perspective of a lover of classic golf courses is our recommended course of action.

While you're in the neighborhood... The Country Club of Woodbridge is a former private course designed by Donald Ross disciple Orrin E. Smith, with interesting greens and a convivial feel. Another former private course nearby is the Tradition Golf Club at Oak Lane, a Geoffrey Cornish design with greens that are fast and steeply pitched from back to front. Après-golf, Frank Pepe's and Sally's are pilgrimage sites for pizza lovers.

The Badgers' basketball team earned a number-1 seed in the tournament, and Wisconsin students have access to a wonderful golf course to match. Designed by Robert Trent Jones, Jr., University Ridge is long but fair - perfect for both a Division-I golf team and the thousands of University students and staff who pay deeply discounted rates to play it. Golfweek ranks it seventh in the state.

While you're in the neighborhood... Erin Hills is less than 90 minutes from Madison. Or, if you want to see two of the country's most under-appreciated public courses, head about an hour and 40 minutes north to check out the Golf Courses at Lawsonia, particularly the dramatic Links Course, with its open feel, heaving fairways and imposing bunkering.

The Scarlet Course has played  host to the Web.com Tour's Nationwide Children's Hospital Championship since 2007, with that tournament being a part of the Web.com Tour Finals since 2013. The course, radically redesigned by Buckeye alum Jack Nicklaus, is similar to Wisconsin's: big, brawny but with a range of tee yardages for all.

While you're in the neighborhood... The Scarlet is not the only course at OSU; while not as interesting as its big brother, the Gray Course, at just 5,800 yards from the tips, provides more birdie opportunities. Just west of town, the Golf Club of Dublin is a Hurdzan/Fry design with a linksy look.

Pete Dye has lent his hand to a number of universities' golf facilities. Had the likes of Virginia Tech (the River Course), Michigan (Radrick Farms) or Arizona State (Karsten) made the NCAA Tournament, their courses would vie for inclusion on this list as well. Purdue's facility actually has two courses, but Kampen is the superior one, with all the Pete Dye markings: mounds, railroad ties, water and plenty of bunkers, from pots to enormous sandy wastes.

While you're in the neighborhood... Kampen's companion Ackerman Hills Course is being renovated by Pete Dye's firm, so once it reopens in 2016 there will be a much smaller quality gap between Purdue's courses. In the meantime, if you find yourself in the area, head southeast toward Indianapolis and play The Trophy Club, designed by Tim Liddy, a Dye disciple with an excellent reputation.

While you're in the neighborhood... Head southeast toward Lake Oconee, home to Reynolds Plantation's courses, as well as Cuscowilla, a Coore/Crenshaw layout that is one of our favorites.

Speak of the devils, Bill Coore and Ben Crenshaw are now household names in golf course design, but their design on Notre Dame's campus came before their recent meteoric rise. Nevertheless the course is a good one - understated and strategically complicated without being overly difficult.

While you're in the neighborhood... South Bend, Indiana is a bit isolated from other stellar golf options, so we recommend heading north into Michigan, where prospects improve, starting with the Jack Nicklaus-designed Harbor Shores in Benton Harbor, about 50 minutes away.

Duke's basketball tradition is world-renowned, but its golf history is strong as well, thanks to the presence of this Robert Trent Jones, Sr.-designed and Rees Jones-renovated track that sits at the foot of the stately Washington Duke Inn. In fact, the hotel may be even better than the course, which winds its way through the valley below. It's not an obvious place for a golf getaway, but parlay a round at Duke with visits to two other nearby ACC courses, UNC - Finley and NC State - Lonnie Poole, and you have an interesting, affordable trip.

While you're in the neighborhood... To reiterate, we're big on the idea of a Duke-UNC-NC State road trip, especially if you're a college basketball nut. All three courses are within an hour of each other.

Todd Hamilton and Anthony Kim (remember him?!) honed their games at this track originally designed by Perry Maxwell (responsible for many of Augusta National's greens) and later modified by Bob Cupp (responsible for Liberty National in New Jersey). If your son or daughter is considering becoming a Sooner, we recommend you bring your clubs for the visit.

While you're in the neighborhood... There's little else in Norman, so your best bet is to head up the road to Oklahoma City, though while cheap, none of the public golf options stick out much.

Just squeaking into our field of eight is this home of the Tar Heels that sports big greens and fairly generous fairways, with designer Tom Fazio's recognizable bunkering standing guard at every turn. Fazio's courses tend to be private, so if you're a fan of his work but don't have tons of juice, this is a handy alternative.

While you're in the neighborhood... See our entry on Duke's course. And eat some barbecue along the way.

As with any list, there's bound to be debate over who we left out, so here were the "bubble" courses that didn't quite make our own "Elite Eight":

What do you think of our list? What other college and university courses are on your "must-play" list? Give us your thoughts below.

You missed the Mackenzie gem at the University of Miichigan. I think it is his only university course.

The Traditions course at Texas A&amp;M is one tough layout, and the team's practice facilities are second to none! Hosted Women's NCAA a few years back.

Michigan State has two great courses (East and West). Especially nice is it is open to the public. Not like UM which you need connections to play.

I checked with The Ohio State a couple of weeks ago and was told that unless I had connections (alumni, student, faculty, etc.) I would not
be able to play their courses.

Not a single course west of Oklahoma??? Another example of East Coast bias.

Forest Acres West Golf Course on the campus of Michigan State University.. Originally designed by W. Bruce Matthews and renovated by Arthur Hills, it may be the only collegiate golf couse in the nation that serves in an eductional capacity as an arboretum featuring most of Michigan's native trees and a wide variety of shrubs.

The Washington-Duke course is severely overrated. It looks like they cut corners during construction. I could list well over 75 courses in North Carolina that are better. It's not even one of the top courses in The Triangle. My guess is the original RTJ course was superb but then someone decided to change it.

I've played the Stanford University course which was awesome!

Last I checked Stanford was ranked on the top 100 courses in the country. It slipped a bit when the layout was reconfigured to accommodate Sand Hill Road widening but it's still an elite university course. Cornell is also noteworthy I have heard.