What's new in the Phoenix-Scottsdale golf scene for 2019

From new holes to revamped hotels and clubhouses, there's a lot of new things to see this peak season

SCOTTSDALE, Ariz. — Besides its great weather and sheer number of quality courses, Phoenix-Scottsdale ranks among the best golf destinations in the world because it never stands pat. So it comes as no surprise that visitors to the area can always look forward to something new on the golf scene.

If you're headed to the area for the peak winter golf season, here's a look at what's new.

Addition by subtraction at The Phoenician

While the reopening of the golf course at The Phoenician Resort & Spa headlines the updates for 2019, the golf course is just part of the story. The resort also made significant improvements to its restaurants and other amenities. The revamped golf course, once a cramped 27-hole layout, is a much cleaner 18-hole course that can now compete with the top courses in the area. Reopened in November after being shut down for 10 months, the remaining 18 holes at The Phoenician Golf Club are still recognizable, but they're much improved.

In the redesign, local architect Phil Smith, who worked extensively for both Jack Nicklaus and Tom Weiskopf before striking out on his own, improved the flow of the course by re-contouring fairways, reshaping water hazards and moving tees and bunkers to create better visuals and playability. The holes that were eliminated didn't fit with this cleaner course flow. Smith also gave a few holes an entirely different look.

"Everything is now right in front of the golfer, as there are no blind shots or blind hazards," Smith said. "We're thrilled with how the golf course looks and plays." 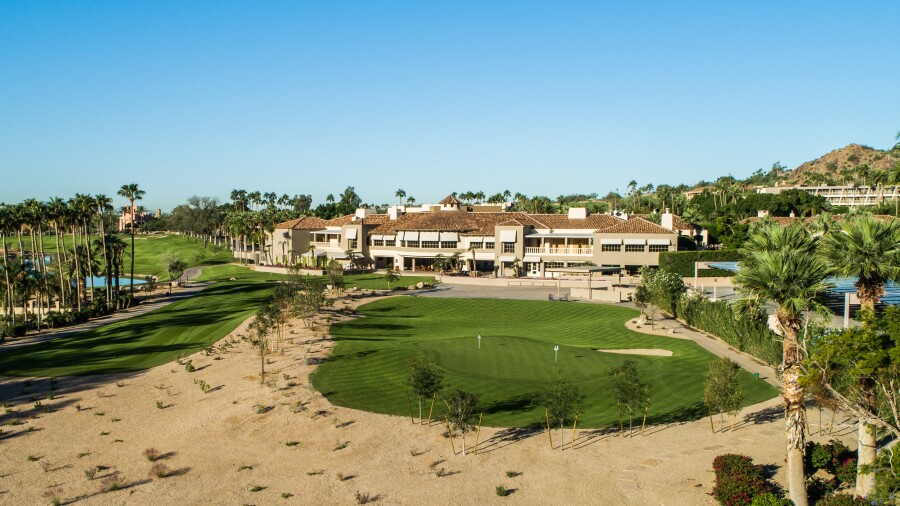 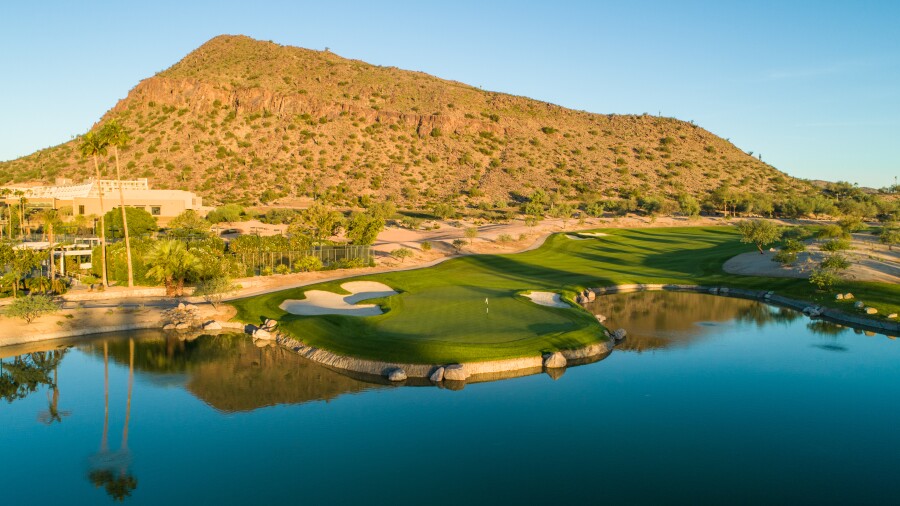 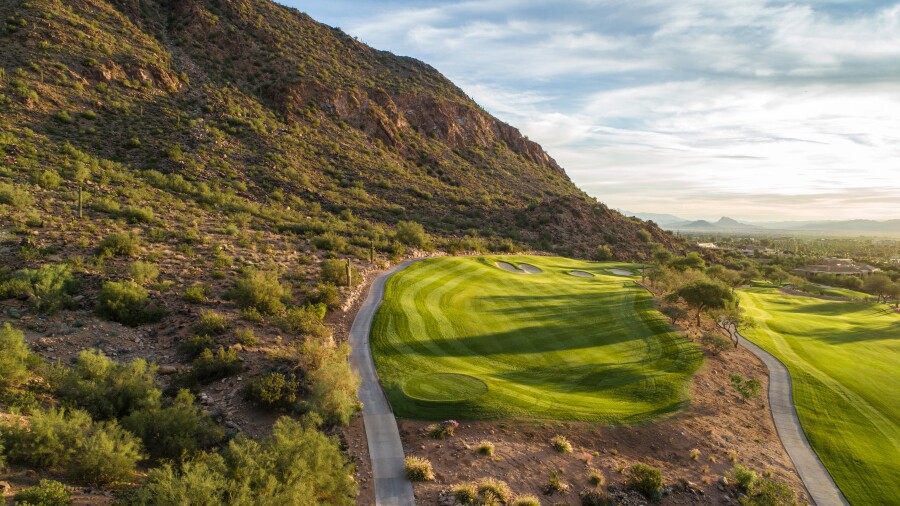 One of the most dramatic holes at The Phoenician remains the short par-4 13th, which is perched above the 14th. Courtesy of The Phoenician 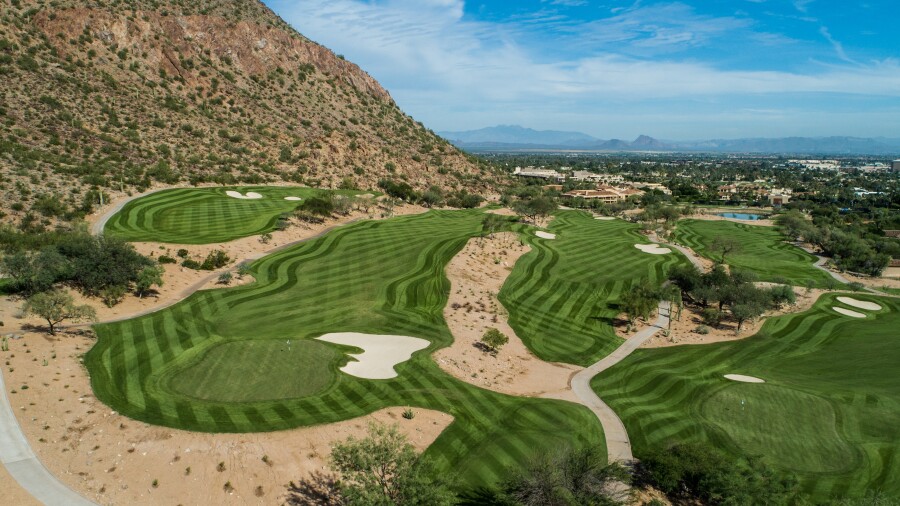 An aerial view of much of the back nine of the newly renovated Phoenician Golf Club. Courtesy of The Phoenician 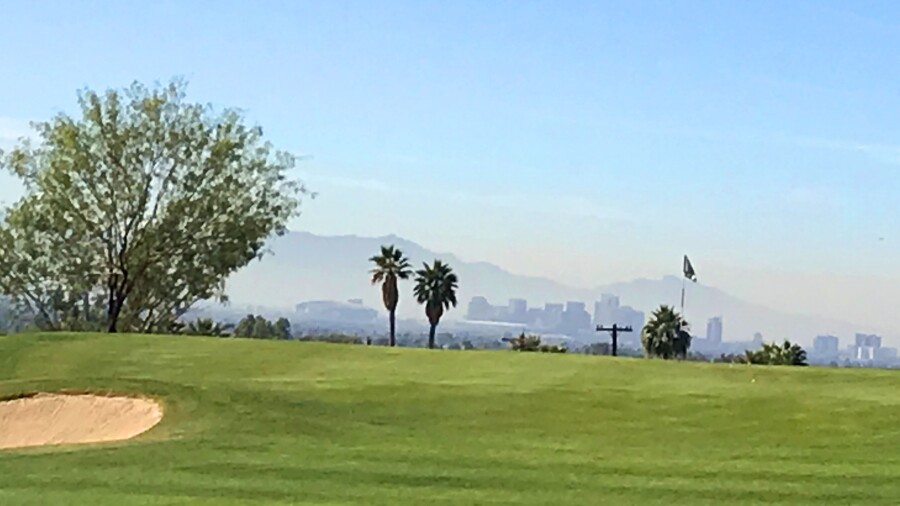 You can see the Phoenix skyline beyond the 14th green at The Phoenician Golf Club. Mike Bailey/Golf Advisor 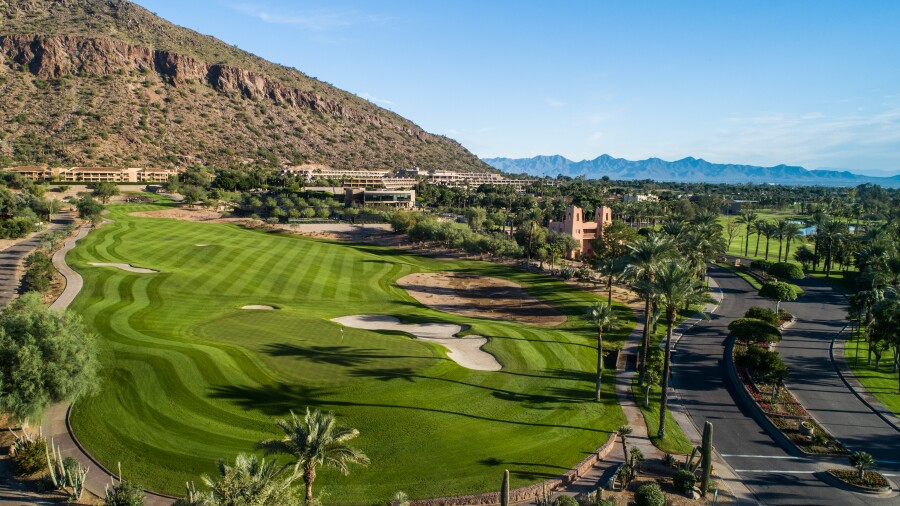 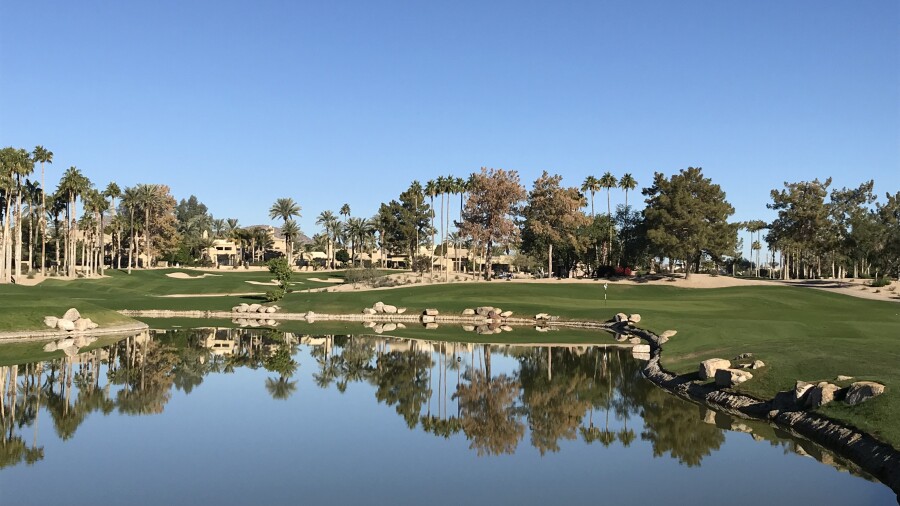 The short par-3 17th at The Phoenician has a beautiful hazard. Mike Bailey/Golf Advisor

Indeed, the holes that formerly required blind shots into hazards are gone, as is the elevated par 3 that used to be on the side of Camelback Mountain. Some may miss the interesting view provided by the latter, but it really wasn't a good golf hole.

Fortunately, the 6,518-yard, par-71 golf course still has plenty of inspiring views, especially when you get to the back nine. There you will find terrific vistas of the Phoenix skyline and the nearby surrounding mountain peaks. The course has also been in perfect condition this winter. There's new turf all around, including brand new Tif Eagle greens.

A couple of holes at the Phoenician are dramatically different. The new ninth hole, spliced from the old Desert no. 3 and Oasis no. 8, is a beautiful par 4 with a peninsula green well guarded by a lake and greenside bunkers. The new 16th hole, which used to be no. 9 on the Desert Course, was lowered and has better views than before.

This Troon-operated facility now has new cart paths and brand new golf carts equipped with the Shark Experience, which not only provides maps and distances to the holes, but allows players to tune in to a variety of music, videos, sports scores and news.

The clubhouse has also undergone renovations. You'll find a spruced up golf shop, as well as new flooring, seating, lockers and lighting in the locker rooms and a new look for the 19th Hole Restaurant. Sometime later this year, The Phoenician Tavern, a gastro-style pub perched above the golf part of the clubhouse, will debut.

As for lodging at The Phoenician, 2018 saw a number of improvements on top of the work that's been ongoing over the past couple of years. Perhaps most noticeable is the new Phoenician Athletic Club, a two-story structure that overlooks the golf course. Inside its 4,600-square foot clubhouse is the latest in modern equipment and technology, available to members and guests. Outside are new tennis and pickle ball courts.

The Phoenician Spa has also been revamped. The new three-story facility features a rooftop pool, dry bar, Aroma Design Bar and couple's suite, to name just a few of the amenities that go along with a full menu of treatments.

The dining at The Phoenician is exquisite and includes numerous improvements, highlighted by the resort's signature restaurant, J&G Steakhouse. The now more contemporary-designed restaurant features both indoor and outdoor seating, but more importantly an outstanding menu served family style and impeccable service. New menu items include the Wagyu Tomahawk Rib eye, Rack of Lamb and Alaskan King Crab Legs, complemented by twists on a variety of cocktail classics, such as the Fiery Mandarin, a spicy take on the traditional Cosmo.

It was 10 years in the making, planned when the course was renovated a decade ago, but Phoenix muni Papago Golf Course finally got its new clubhouse. And it's well worth the wait. In early December, the facility conducted a grand opening for the new building, which is named for local auto dealer and philanthropist Lou Grubb, whose Lou and Evelyn Grubb Foundation donated around $5 million to fund the project.

Designed by Phoenix-based Douglas Fredrikson Architects and built by Rummel Construction Inc., the new clubhouse was part of a larger overall project that includes new practice facilities and the new home of the Arizona State University golf teams. The ASU building, which has its own advanced practice facilities, bays, meeting rooms and lounges for ASU players and staff, isn't open to the public, but the rest of this gem is.

In short, Papago is one of the best places to practice in the Valley now, but it's an even better place to hang out. The clubhouse has a great open feel to it (it's convertible with garage doors that open up to the vast patios) and includes Lou’s Bar & Grill, which features a great menu, craft beers and signature cocktails. Even if you don't play golf there (and I recommend you do), it's worth it just to have dinner and check out the weekly live entertainment.

Scottsdale's Troon North Golf Club is a perfect example of a golf facility that has no plans to give up its lofty status. Two years ago, it unveiled the newly refreshed Monument Course, and now it's the Pinnacle Course's turn. (Both are perennially ranked among America's top 100 courses.)

The Pinnacle Course, often considered the slightly better of the two Troon North layouts, reopened in October after being shut down for 10 months to get pretty much new everything. The main consideration was to restore the greens to their original contours and sizes. To do that, the club went back to designer Tom Weiskopf's original plans.

The greens were also resurfaced with A-4 bentgrass, while the collars got TifGrand Bermuda. Ron Despain, vice president of golf course development at Troon, oversaw the work, which was done by the club's agronomy team. In addition, the Monument course's greenside and fairway bunkers were also redone with new drainage, liners and Pioneer bunker sand.

In Maricopa, Ak-Chin Southern Dunes recently finished a bunker restoration project after flooding that caused the course to close early this past fall, ahead of the scheduled overseeding.

How bad was the situation? The Clubhouse staff literally had to be rescued by the Fire Department when the flash flooding came through last fall. But now this links-style course, a splendid design by Lee Schmidt, Brian Curly and Fred Couples, looks better than ever.

Roughly 30 percent of the course's bunkers were damaged beyond standard repair, so the course closed every Monday and Tuesday during the last couple of months of 2018 as crews worked feverishly to rebuild the bunkers.

The host hotel for The TPC Scottsdale and Waste Management Open, the Fairmont Scottsdale Princess, has also made a few changes lately. One of the more noticeable improvements involves the resort's signature Mexican restaurant, La Hacienda by Richard Sandoval. Both the layout of the restaurant and the menu have been given makeovers.

The popular hangout now has 75 more seats as the interior bar was opened up and the front entrance moved to the actual front of the restaurant from its former side location. In addition, a new outdoor patio overlooks a beautiful lawn that during the holidays also holds an ice-skating rink and Christmas decorations that rival Disney.

New items on the menu include smoked cocktails and guacamoles, though the old favorites remain. Among those are the lobster tacos, a signature dish, as well as various entrees featuring the restaurant's famous mole sauces. Of course, La Hacienda, which is directed by the world renowned Sandoval, is also known for its incredible tequila selection.

In addition, the resort has also updated its 24-hour fitness center with new equipment and furnishings. New fitness classes have also been added to the lineup at the Well & Being Spa.

It's never been easy to get tee times at Copper Canyon, located in the retirement community of Sun City, but the recent addition of nine holes is making golf there a little more available to the public.

When it debuted last November, the new Mountain nine by architects Schmidt and Curley, who designed the original 18, gave the club 27 holes. Not only can Copper Canyon now accommodate a lot more golfers during peak season, it also provides more opportunities to sell home lots.

The new nine is arguably the most picturesque and challenging of the three layouts. Located south of the other two nines, the new holes are closer to the Tank Mountains with more elevation change. Copper Canyon's new nine also has 72 bunkers and is slightly longer, at nearly 3,600 yards, than the other two nines.