Ocean golf, fire pits and fine food at the Ritz-Carlton Half Moon Bay resort in California 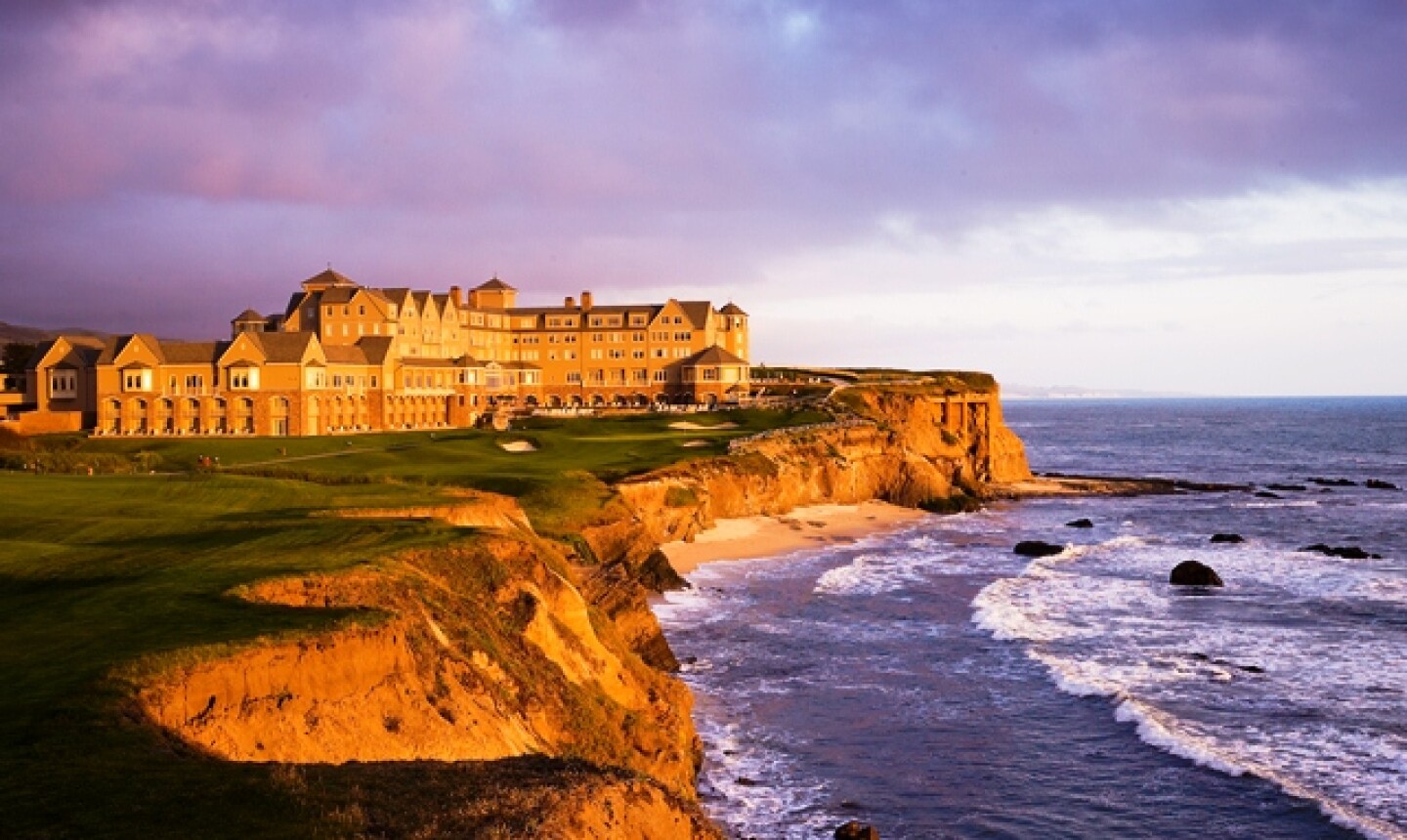 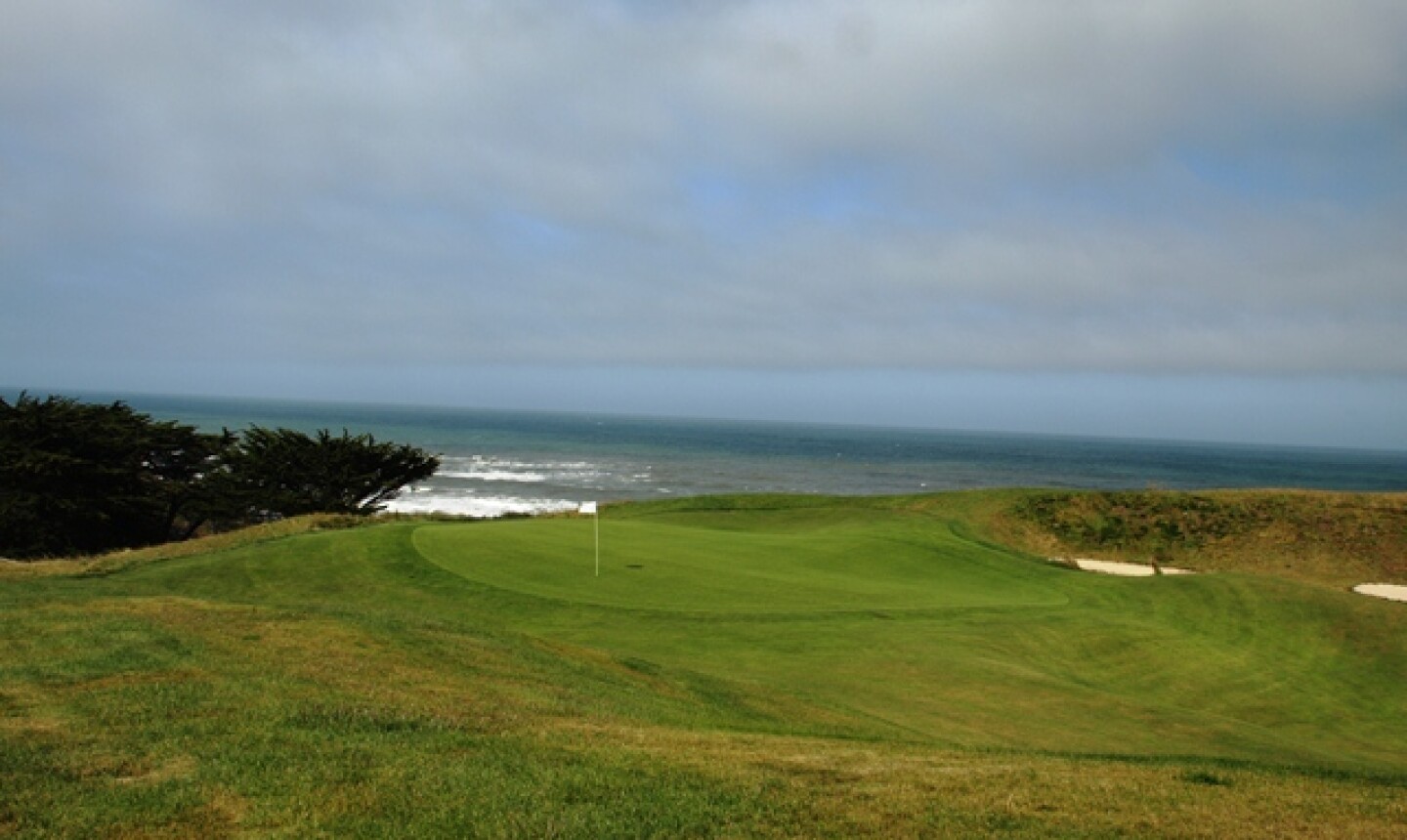 The ocean views are apparent from the first hole on the Ocean Course at Half Moon. Mike Bailey/Golf Advisor 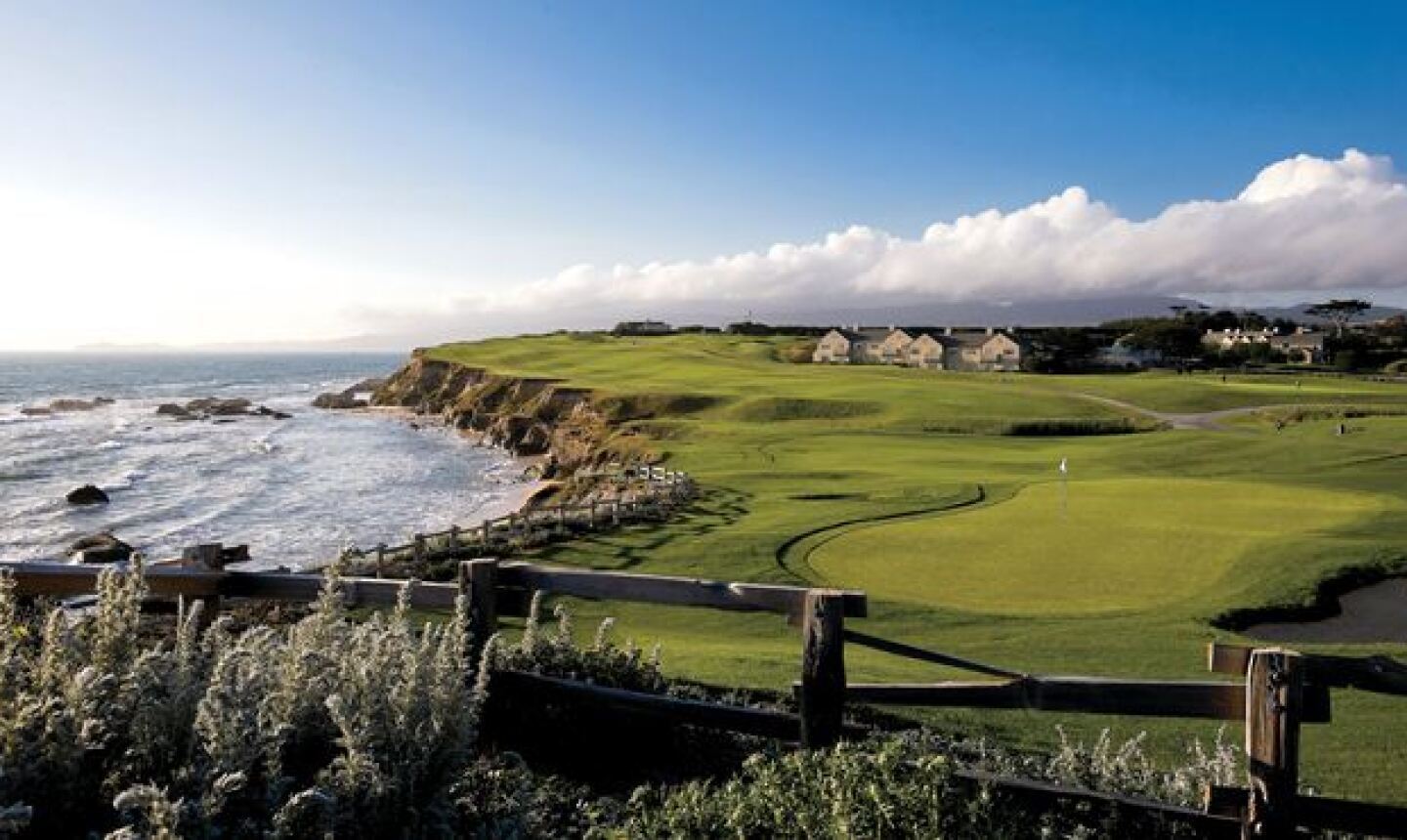 There are few views better than the 18th on the Old Course at Half Moon Bay Golf Links. Courtesy of Ritz-Carlton 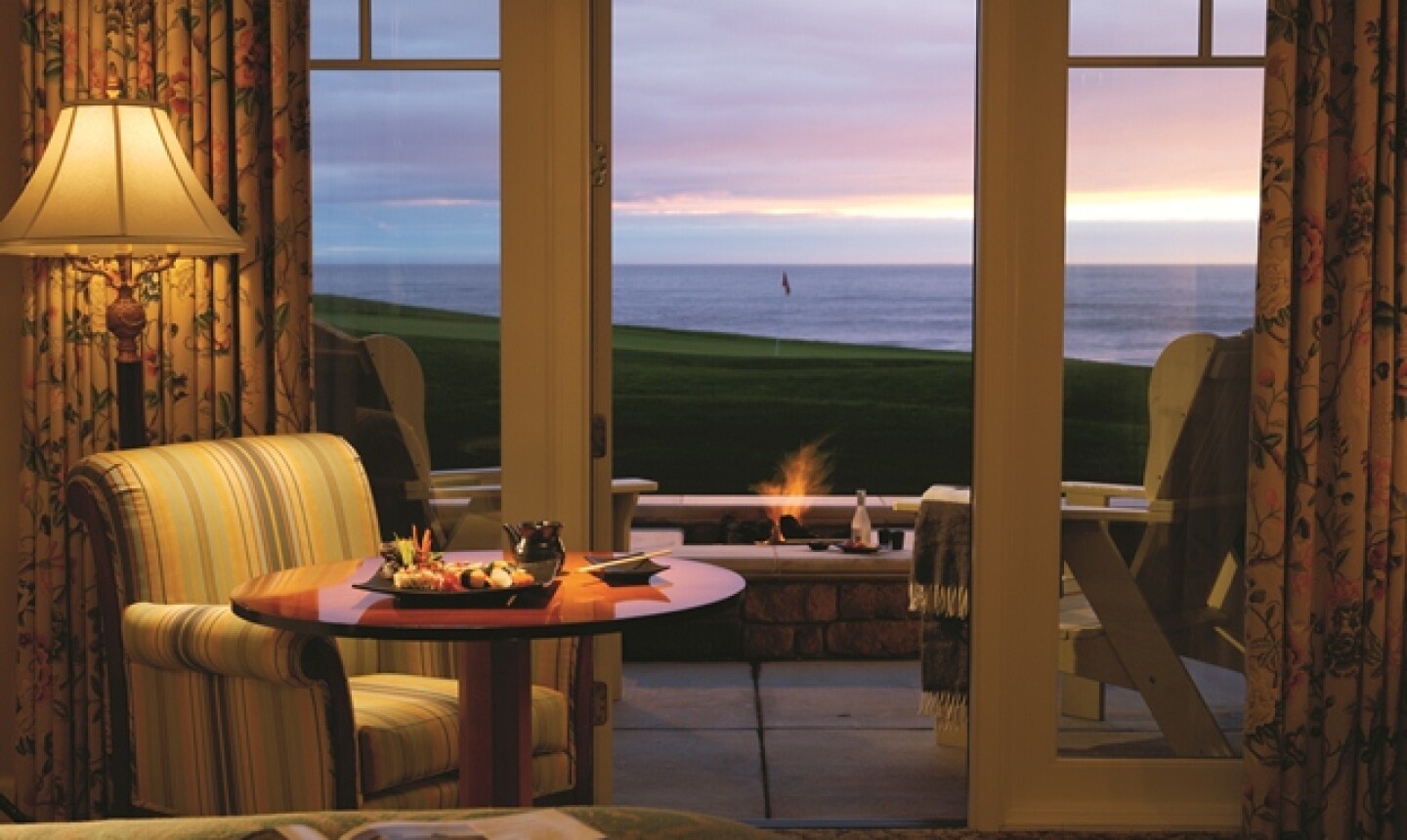 How about a room with a view and a fire pit? The Ritz-Carlton Half Moon has them. Courtesy of Ritz-Carlton 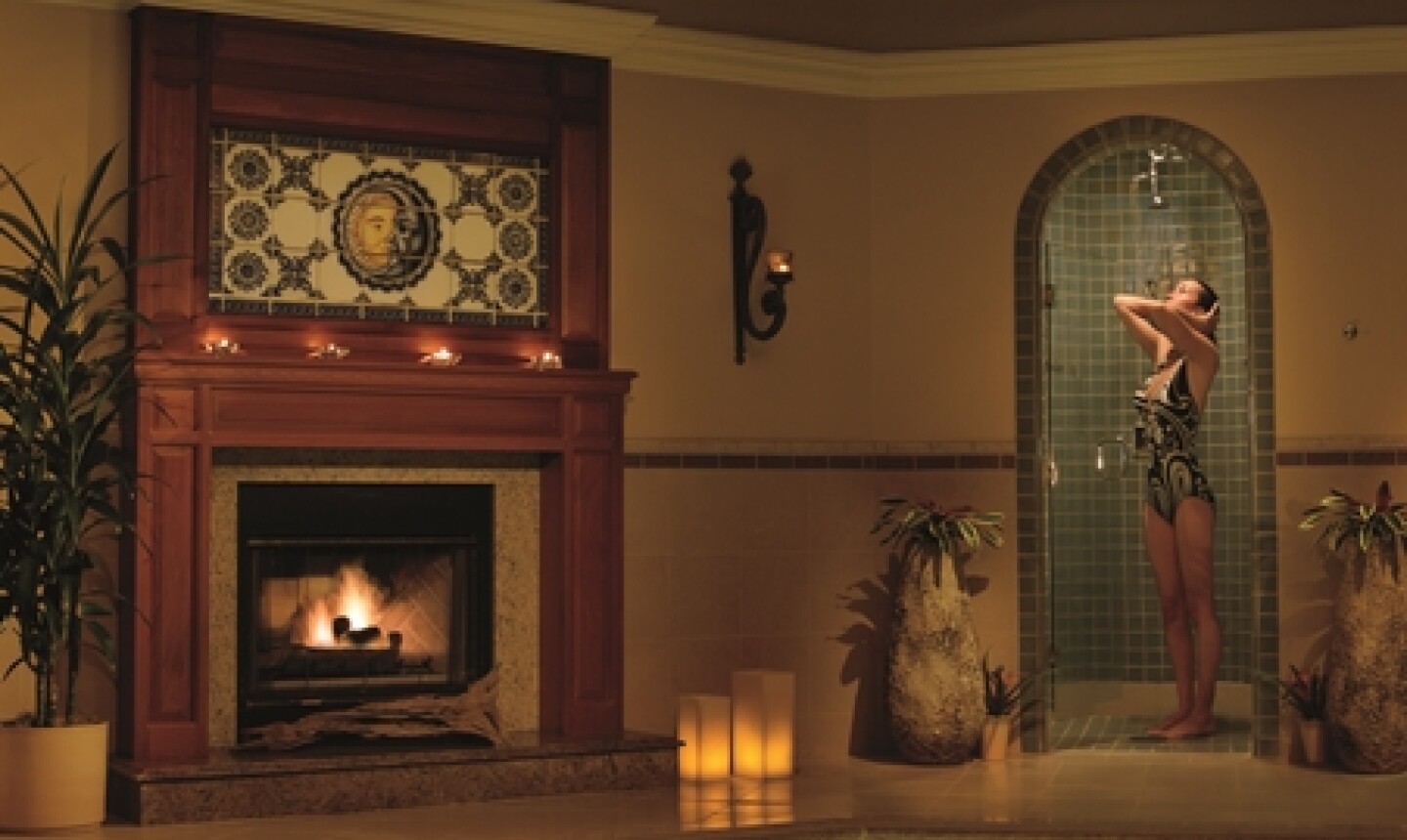 HALF MOON BAY, Calif. -- They say you only have one chance to make a first impression. The Ritz-Carlton Half Moon Bay makes one that's about as good as it gets.

How else can you describe a 261-room luxury hotel sitting on the edge of a cliff, perched high above the black rocks jetting out of the Pacific Ocean and a half-hour south of San Francisco? This is the scene of romance novels, of links golf more akin to Ireland or Scotland than the United States. Of course, this is also the northern California coastline, next to one of the greatest and most dramatic surfing spots in the world.

And just to stay in character, the valets who greet you upon arrival -- and there are many of them at the Ritz-Carlton -- are dressed in plus fours like you might see at St Andrews. A bagpiper also reels in the evening to complete the old world golf coastal experience.

Opened in 2001, this six-story castle-like resort is quite simply an escape to another time and another environment. And it has all the modern conveniences -- high-speed internet, flat-screen high-definition TVs in the rooms and luxurious bathrooms that offer both large soaking tubs and separate showers.

If you're looking for bargains, this isn't your resort. Luxury value, however, is another story. Ritz-Carlton employees are highly trained in guest relations. It may seem a little over the top to some, but the staff strives to please each guest.

But the real star here is outdoors. There are two golf courses -- the Old Course, an Arnold Palmer/Francis Duane parkland design that opened in 1973, and the Ocean Course, a 1997 Arthur Hills creation that plays through the elements with ocean views from virtually every tee.

The latter isn't true links, but it's close enough. You have to consider the wind on almost every tee shot, every approach, so bumping the ball down the fairway and onto the greens isn't just an option, it's smart. That certainly qualifies as links golf.

But more than that, you'll be awestruck by the views, not just from the Ocean Course but also from the last couple of holes of the Old Course. In fact, the 18th on the Old Course, which plays up to the hotel alongside the Pacific, offers the best views of any of the 36 holes. It's sort of like the Old Course at St Andrews; there's always a gallery behind the 18th green as you finish your round, except at Half Moon Bay, they're sitting in wooden Adirondack chairs, sipping a cocktail by a warm fire pit.

As one golfer said, "You find yourself taking a deep breath around here as you look out at the scenery. It hardly seems real."

Indeed, the views are breathtaking on both sides, though the Ocean Course certainly has more of them. With its fairways separated by coastal mounding and native grasses, the windswept Ocean Course is the side that gets the most acclaim. It also hosted the 2008 LPGA Samsung World Championship, which was won by Paula Creamer.

Half Moon Bay Golf Links has been a regular site for U.S. Open men's and women's qualifiers. The golf resort also features a clubhouse with a full-service pro shop and the popular ocean-view restaurant, Mullins Bar & Grill, serving breakfast, lunch and dinner in a casual fireside dining setting.

The spectacular scenery, of course, isn't limited to the 18th on the Old Course, or even the back nine on the Ocean Course. It continues inside this magnificent hotel as well.

The Ritz-Carlton is a AAA "Five Diamond," Conde Nast "Gold List" hotel property, which means the best of everything, starting with the rooms, 71 of which have views of the coast. Forty rooms, located on the first floor looking back to the Ocean Course, have their own fire pits. There are also a dozen cottage rooms, away from the main building, which not only have fire pits but also are pet friendly (translation: you can bring your dog).

Ah, the spa at Half Moon Bay

As you might expect, the Ritz-Carlton Half Moon Bay offers a top-tier spa. One aspect that sets it apart from some other resorts is that all guests have access to it, whether they schedule a spa treatment or not. That means access to the co-ed Roman mineral bath and steam room, group exercise classes and a fitness center.

"Many of our guests are so mesmerized with our spectacular views that they forget we have a world-class spa," said Jay Heidenreich, director of sales and marketing.

Services include treatment like the Ocean Mist Stone Massage, Lomi Lomi Massage and the Sugar, Spice and Everything Nice Body Treatment.

There's also a world-class tennis center, where you can get rackets, balls and lessons. There are hiking trails along the bluffs, Segway Tours, horseback riding and, if you're really adventurous, surfing. As alluded to earlier, Half Moon Bay is one of the world's premier surfing spots. The resort can provide all the gear you need, including wetsuits, boards and even instruction.

Dining is also a special experience at the resort, from the Conservatory Lounge, which provides ocean-view dining, to the high-end Navio Restaurant, which provides one of the best dining experiences in northern California. With a menu that changes with the seasons, Navio serves up true farm-to-table entrees and vegetables, including fresh salad beets that won't remind you of the canned atrocities your mom forced you to eat growing up.

The menu ranges from freshly caught halibut and California King Salmon to the staple braised 48-hour short-rib, which remains a customer favorite. The menu is also complemented by a wine collection directed by one of California's best sommeliers. That wine collection can also be appreciated at the resort's wine-tasting room, called ENO.

And in case you can't get enough at dinner or in the wine-tasting room, the Ritz-Carlton Half Moon Bay also has something called The Fire & Wine Butler, which roves the resort with a specially provisioned golf cart and provides on-the-spot fire and wine service to guests enjoying the outdoors.

Although the resort is certainly all-inclusive, guests should certainly venture into the town of Half Moon Bay for a coffee, a meal or a little shopping.

Once known as Spanishtown, Half Moon Bay is the oldest settlement in San Mateo County, dating back to the 1840s. It's home to one of the largest pumpkin festivals in the world every October, has plenty of local fruit stands, wine tasting, farms and interesting crafts shops.

The restaurant scene is also terrific, offering everything from outstanding sushi and lobster rolls to Huevos Rancheros so good that it's offered for lunch and dinner. 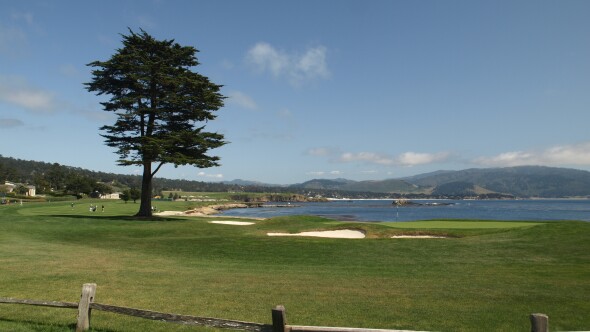 Articles
Eight points for planning a perfect Monterey Peninsula golf vacation
The Monterey Peninsula offers some of the best golf, weather, things to do, dining and scenery that you'll ever experience. If budget isn't a concern, there's no limit to the delights. But you might be surprised to find out that even on limited funds, this California golf vacation can be affordable, and you'll create memories that will last a lifetime, Mike Bailey writes.
5 Min Read